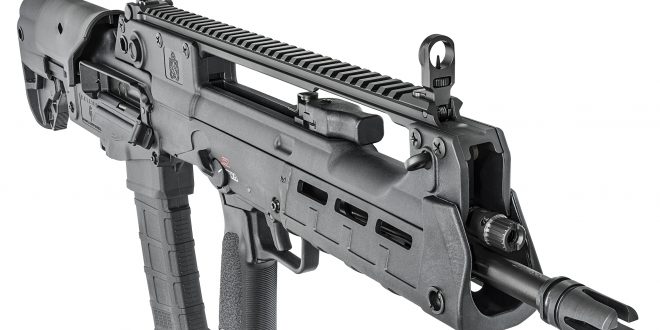 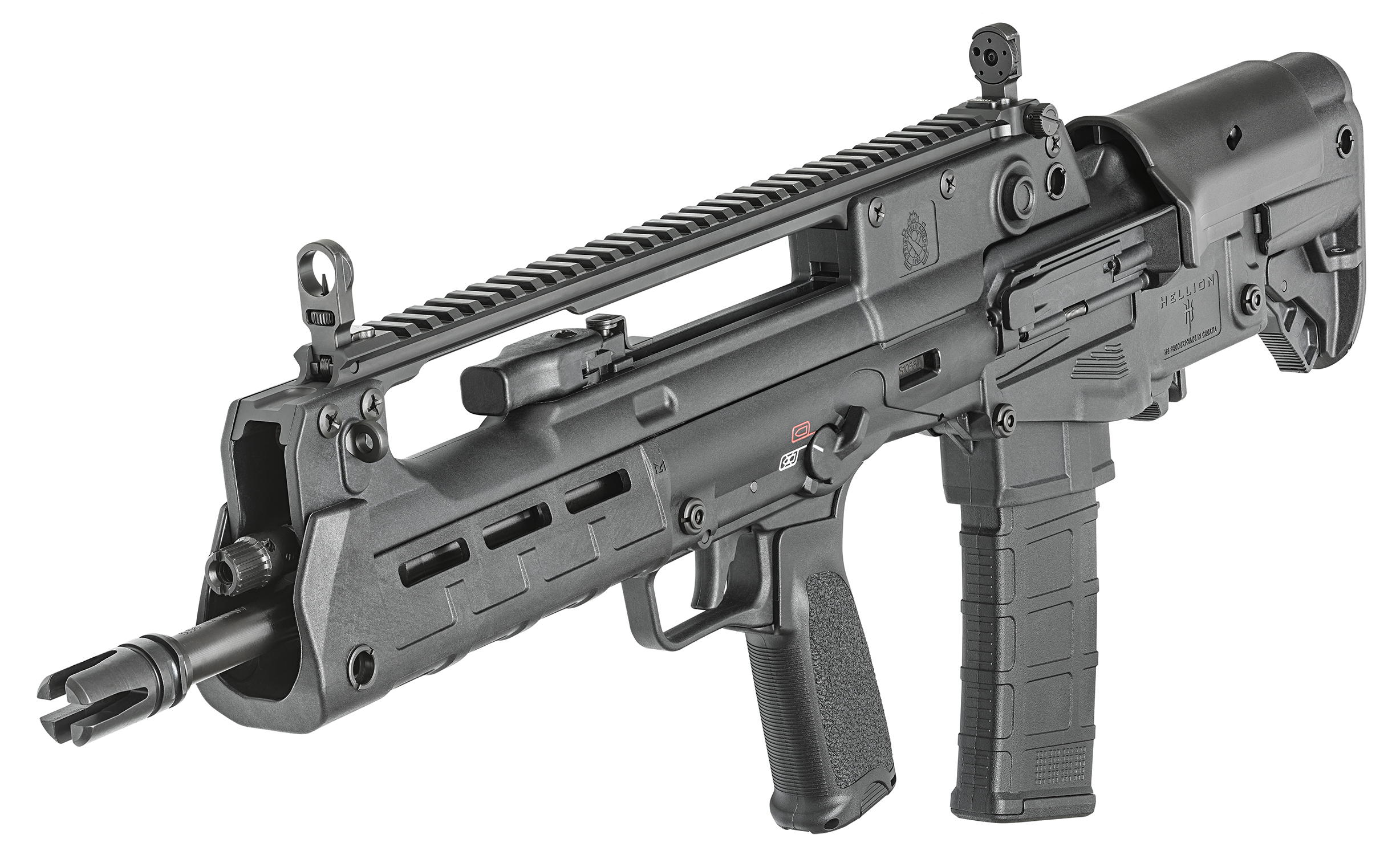 DefenseReview (DR) hasn’t published a piece on a bullpup rifle/carbine in quite some time, but Springfield Armory just conducted a major marketing/PR blitz on their Hellion 5.56mm Rifle being unveiled at SHOT Show 2022, so we should perhaps at least do a quick heads-up piece on it. The Springfield Armory Hellion 5.56mm (bullpup) Rifle/carbine (16-inch barrel) is interesting in a few respects. First, it’s the product of a partnership between an American company (Springfield Armory), and a Croation company called HS Produkt (Love the “kt”. Reads nice and foreign.). The latter’s known for manufacturing the VHS-2 select-fire bullpup rifle, and the Hellion’s is essentially a civilian-legal semi-auto version of the HS Produkt VHS-2 that includes some welcome American commercial-market-focused features.

Some quick history on the HS Produkt VHS/VHS-2: It was developed and introduced in 2007 to replace Croatia’s Soviet-era assault rifle, which was likely a Kalashnikov AKM/AK-47 variant. It was then updated in 2013 (to the VHS-2), and has been used by Croation forces in both Afghanistan and Iraq. 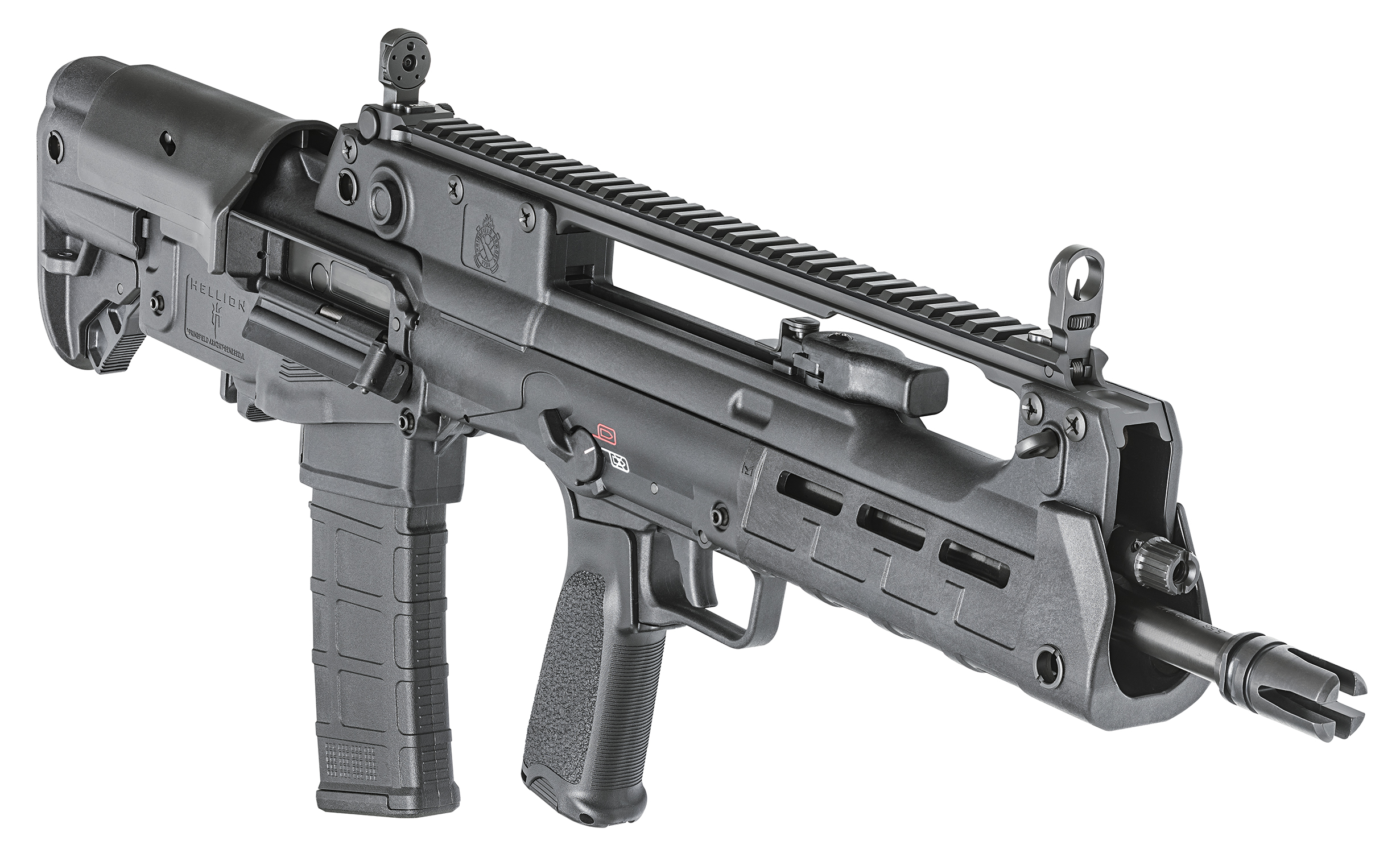 Anyway, second, the Springfield Armory Hellion 5.56mm Rifle has an overall length of only 28.25-inches (28.25″), which is pretty short for a 16″-barreled 5.56mm NATO/.223 Rem. carbine. And, third, the Hellion’s pretty adaptable and feature-rich for a bullpup. It sports a “reversible ejection system”, “fully ambidextrous controls”, “five-position collapsible buttstock”, and “two-position adjustable gas system”. And that’s not all, Monty. Oh, no. The package also comes with a 30-round Magpul P-Mag (where it’s legal, of course), and Bravo Company USA® BCMGUNFIGHTER™ Mod 3 pistol grip. DR approves.

Defense Review would love to get a Hellion into DR writer/contributor Jeff Gurwitch’s hands at some point, since he combines US Military Special Operations Forces (SOF) experience with competitive 3-Gun experience, and has moved from the tactical AR (AR-15) platform to the tactical AK platform as of late. So, we can’t wait to get his thoughts on the Hellion.

Anyway, Springfield Armory has a whole press release on the new blaster that you can read below. Here ya’ go:

“GENESEO, ILL. (1/14/22) – Springfield Armory® is proud to announce the release of the Hellion™, answering the call for superior ballistic performance in a short, modular and fully ambidextrous 5.56mm bullpup platform.

Unlike a traditional long gun, the bullpup system locates the action and the magazine behind the trigger and into the buttstock area. By doing this, it reduces the overall length drastically, while still allowing you to have a barrel long enough to retain effective downrange performance.

Based on the internationally proven VHS-2 bullpup, which has been employed by the Croatian armed forces in demanding environments ranging from Iraq to Africa and beyond, the Springfield Armory Hellion offers American shooters a semi-automatic version of this highly capable firearm. As part of the Hellion’s development, Springfield Armory adapted the original VHS-2 design for the American market. This includes its ability to feed from AR-pattern magazines, the use of replaceable AR-pattern pistol grips, M-Lok® slots in the handguard and the addition of six QD mounts. 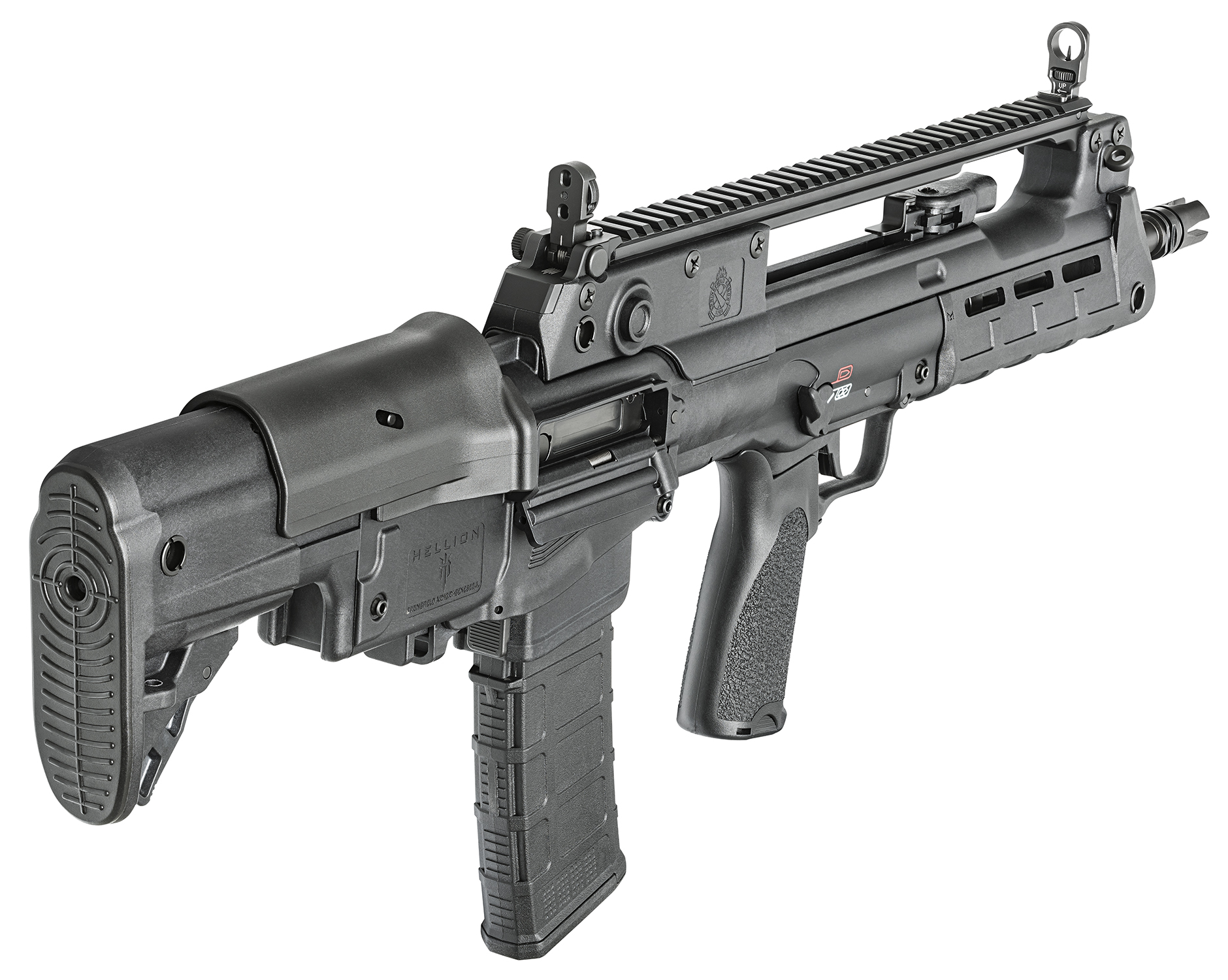 The Hellion features a reversible ejection system that requires no additional parts or tools. Complementing this system is a set of fully ambidextrous controls, including the safety, charging handle, magazine and bolt release. The result is an ultra-compact 5.56mm that can be easily fired from either shoulder.

“The new semi-automatic Hellion builds upon the solid foundation of the Croatian VHS-2, and adapts it to the needs of American shooters,” says Steve Kramer, Springfield Armory’s Vice President of Marketing. “With the changes applied to the design by Springfield Armory, the Hellion offers American shooters a truly unique and capable 5.56mm bullpup.” 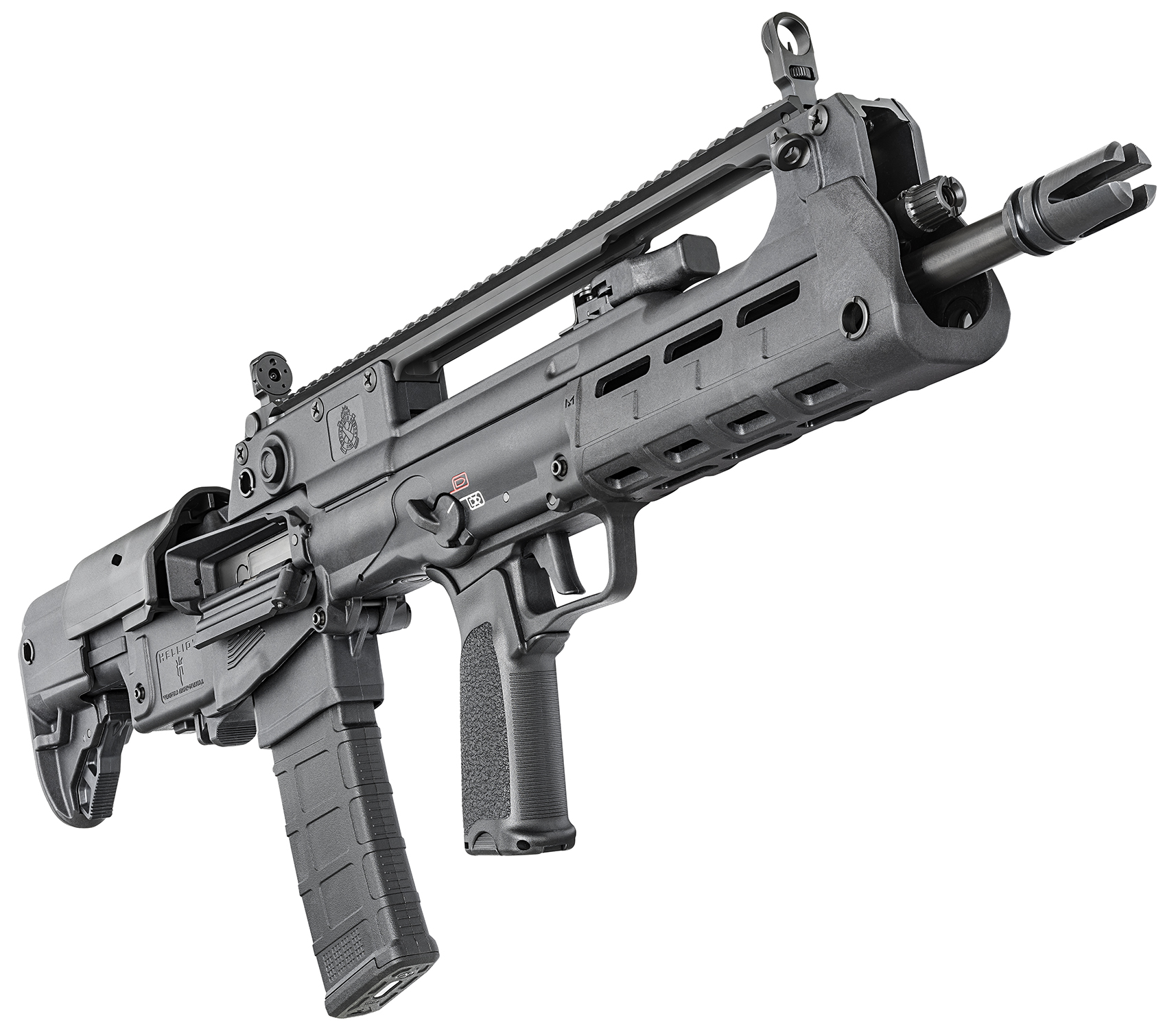 The Hellion is highly adaptable to the needs of shooters, through the use of a five-position collapsible buttstock as well as a two-position adjustable gas system. It is also ready to accept the optic of your choice on the top strip of Picatinny rail, which also integrates a set of flip-up iron sights. It comes with a 30-round Magpul® PMAG and Bravo Company USA® BCMGUNFIGHTER™ Mod 3 pistol grip. MSRP is $1,999.

In 1794, the original Springfield Armory began manufacturing muskets for the defense of our young, free Republic. The Armory functioned as a firearms supplier for every major American conflict until 1968 when the government sadly closed its doors. In 1974, nearly two centuries after its inception, Springfield Armory Inc. in Geneseo, Ill. revived the iconic heritage of the Armory to carry on its legacy.

We strive to honor this responsibility as guardians of the original Springfield Armory legacy by manufacturing the highest quality firearms to enable responsible citizens to preserve their right to keep and bear arms in the defense of life, liberty and the pursuit of happiness.

With an unmatched emphasis on craftsmanship, performance and exceptional customer service, our mission is to forge superior firearms and provide the tools necessary to defend individual freedoms and equality for those who embrace the rights and principles secured by our Founding Fathers. For more information, please visit us at: springfield-armory.com.” 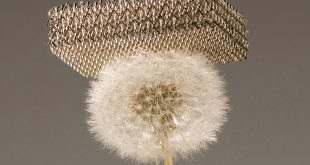