All photos contained in this article were taken by, and are the property of, DefenseReview.com. Click on photos (below) to view them full-size.

Back in August, DefRev published a short article on the Smith and Wesson Military and Police pistol (a.k.a. S&W M&P pistol), titled Smith & Wesson M&P Pistol: The Next Evolution in Polymer-Framed Combat Pistols?. The article was based on Charles E. Petty’s posting on the M&P on the web. Well, DefenseReview just got to handle the the new S&W M&P at IACP 2005 Miami, and we must say the gun looks and feels really good. The striker-fired M&P is extremely comfortable in the hand, due the shape and texture of the grip, although some people think the grip needs to be texturized more for a more secure hold while firing with sweaty hands. The grip size can be adjusted by switching out "grip straps" of different sizes. The grip strap is a combination backstrap/side panel. The standard S&W M&P pistol’s grip is pretty long and provides more than enough length for most hands, and the grip angle appears perfect for natural pointing–and thus point shooting. 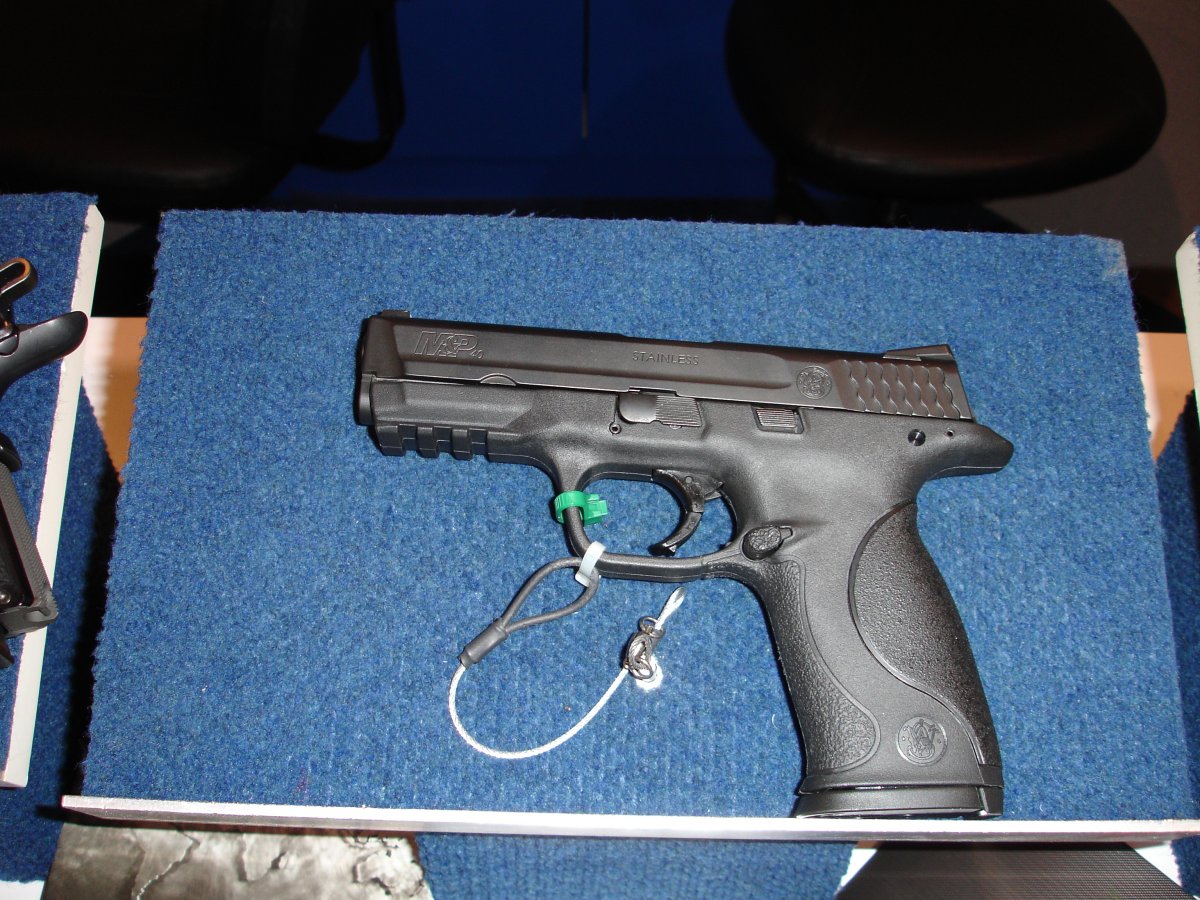 contribute to fast and accurate point shooting (in close quarters, at least).

Defense Review did not get to T&E the M&P pistol at the range yet, since the sample pistols at IACP were all prototypes and to our knowledge, Smith & Wesson didn’t provide for a range session at the conference/exhibition. Hopefully, we can get our hands on a production M&P pistol, soon. Speaking of the prototypes, there were two things DefRev noticed that one of the Smith & Wesson reps at the booth said would be rectified on the production guns. On a prototype M&P pistol I handled, I couldn’t feel the point of trigger reset (via a tactile and audible "click") after I pulled the trigger, like I can on my Glock. This meant that I couldn’t take advantage of the M&P’s relatively short trigger reset. When I mentioned this to the Smith & Wesson rep, he told me that this will be rectified on production M&Ps, and I was left with the impression that the trigger reset would feel and sound similar to the Glock’s, although I’m just inferring this, at this point. Secondly, when I tried inserting the magazine into my pistol, the magazine catch sometimes wouldn’t engage, even though I was slamming the magazine home with some decent force. The S&W rep noticed what I was doing, and made sure that I understood that the pistol I was examining was a prototype, and assured me that this particular problem wouldn’t be present on production pistols. It should be noted that these types of glitches or imperfections, if you will, are common on prototypes–especially when you’re racing to get them to an industry show. 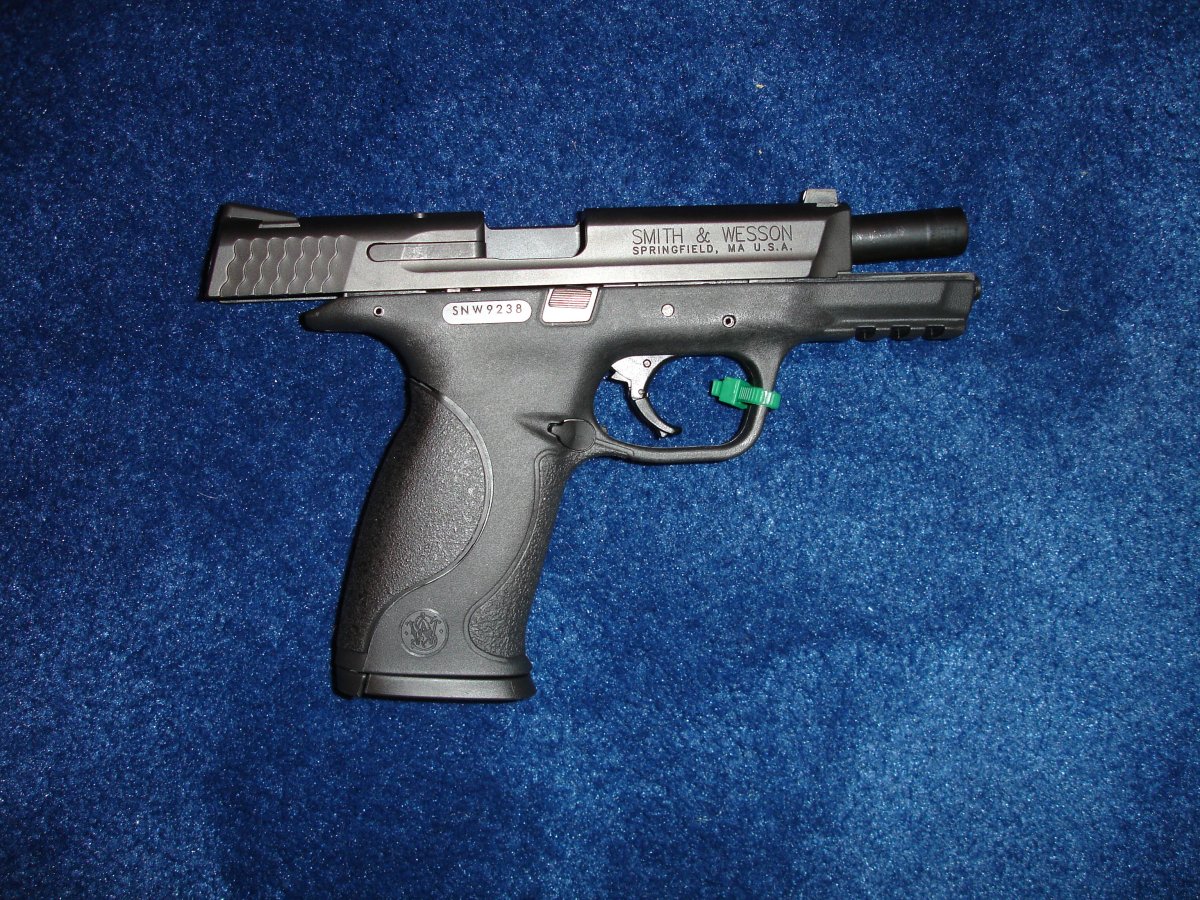 By the way, unlike the Glock, you don’t have to pull the trigger on the M&P to disassemble it. The M&P’s sear release lever is part of the trigger assembly at the rear of the pistol. To field strip the M&P, just lock the slid back, push down the sear release lever that becomes visible in the middle of the magazine well, pivot the takedown latch, pull the slide back a bit to release the slide latch, and remove the slide just like on a Glock, SIG, or any other semi-auto pistol.
A note on the M&P pistol’s frame: The M&P’s frame incorporates a "steel chassis". There are two flat pieces of steel molded into the frame on either side of the magazine well. According to Charles Petty (in his American Cop magazine article) these steel strips provide "anchor points"/support for steel frame inserts and the locking block for the barrel, slide rails, and majority of the trigger mechanism. When mounted in the frame and pinned in place, the two steel blocks provide four corners of support and reduce much of the ‘flex’ associated with polymer frames".
My first impression upon reading this was that this reduction of flex isn’t a good thing. The fact that my carry Glock 19(G19) flexes upon firing assists in reducing felt recoil forces to me, the shooter. However, Petty states in his article that he conducted a blind test where he had several shooters fire the same ammo through several different polymer pistols of "similar weight", and each of the shooters described the M&P as having the least recoil. Now, I’m not sure how Petty conducted such a blind test, since, even if a shooter keeps his eyes closed (usually not a good thing while shooting), a shooter familiar with various polymer pistols (like the Glock, Springfield Armory XD, Heckler & Koch (HK) USP, P2000, etc.) can still feel which pistol make he’s firing. 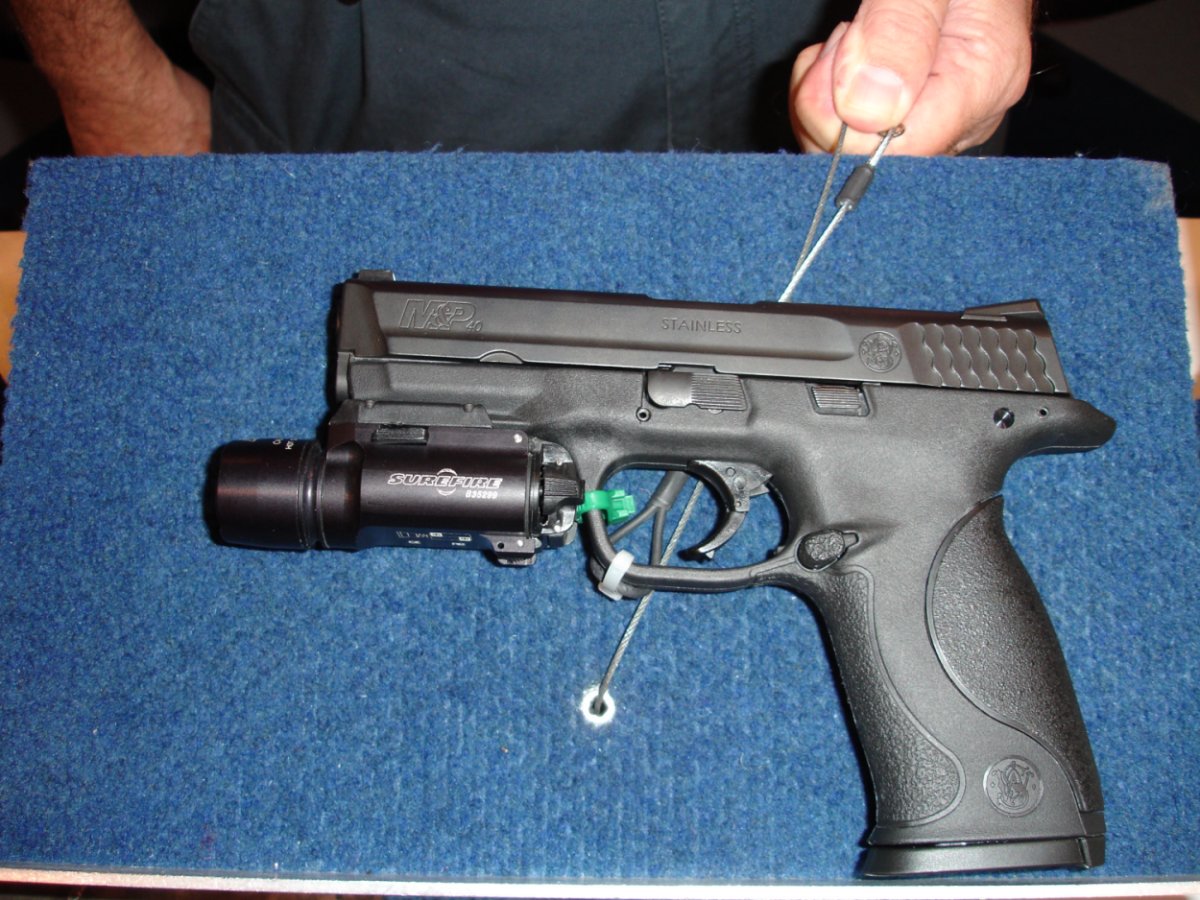 So, what’s DefenseReview’s overall impression of the Smith & Wesson Military and Police (M&P) pistol, based on our experience with it at IACP 2005 Miami? We like it, and think that Smith & Wesson may have just finally nailed it with regard to a polymer pistol. It’s taken them awhile, but better late than never. If the M&P shoots and handles as well at the range (and proves to be totally reliable under adverse conditions and high round count testing) as it looks and feels, Smith & Wesson has a winner on their hands. I’m curious to see how the compact models look, handle, and shoot when they’re introduced. The same goes for the .45 ACP (and possibly .45 GAP?), when it’s/they’re introduced. Right now, the standard M&P is available only in .40 S&W, but 9mm, .357 SIG, and .45 ACP versions are on the way.
I remember hearing someone at IACP say that Smith & Wesson (S&W) might have to modify the grip texture a bit, as the current grip texture, while very comfortable, might not provide for a secure-enough hold if the user has wet/sweaty hands (or hands with blood on them).  Personally, I really liked the current minimalist grip texture when I handled one of the M&P pistols at Smith & Wesson’s booth. The M&P’s grips were as comfortable as I’ve ever experienced on a semi-auto pistol–impressively comfortable.  If it turns out that the current level of grip texturizing is indeed adequate for gripping securely while shooting the pistol under wet conditions (water, sweat, or blood), then Smith & Wesson should keep it just the way it is, and not change a thing. However, if it turns out that the current level of texturizing isn’t adequate, S&W would be advised to be careful in texturizing the grips any further, so as not to lose the currently excellent grip-comfort factor.  So, it would probably be best if S&W kept to a minimalist approach with regard to any grip modifications.
If you’d like to get more information on the S&W Military and Police pistol, you can contact Smith & Wesson by phone at 413-781-8300, or toll free at 800-331-0852. Their fax number is 413-747-3317.
Click on this link to become a DefenseReview.com member.
You might also want to check out the premiere issue of American Cop magazine, which contain’s Charles Petty’s article on the M&P.
More S&W M&P photos from IACP 2005 Miami: 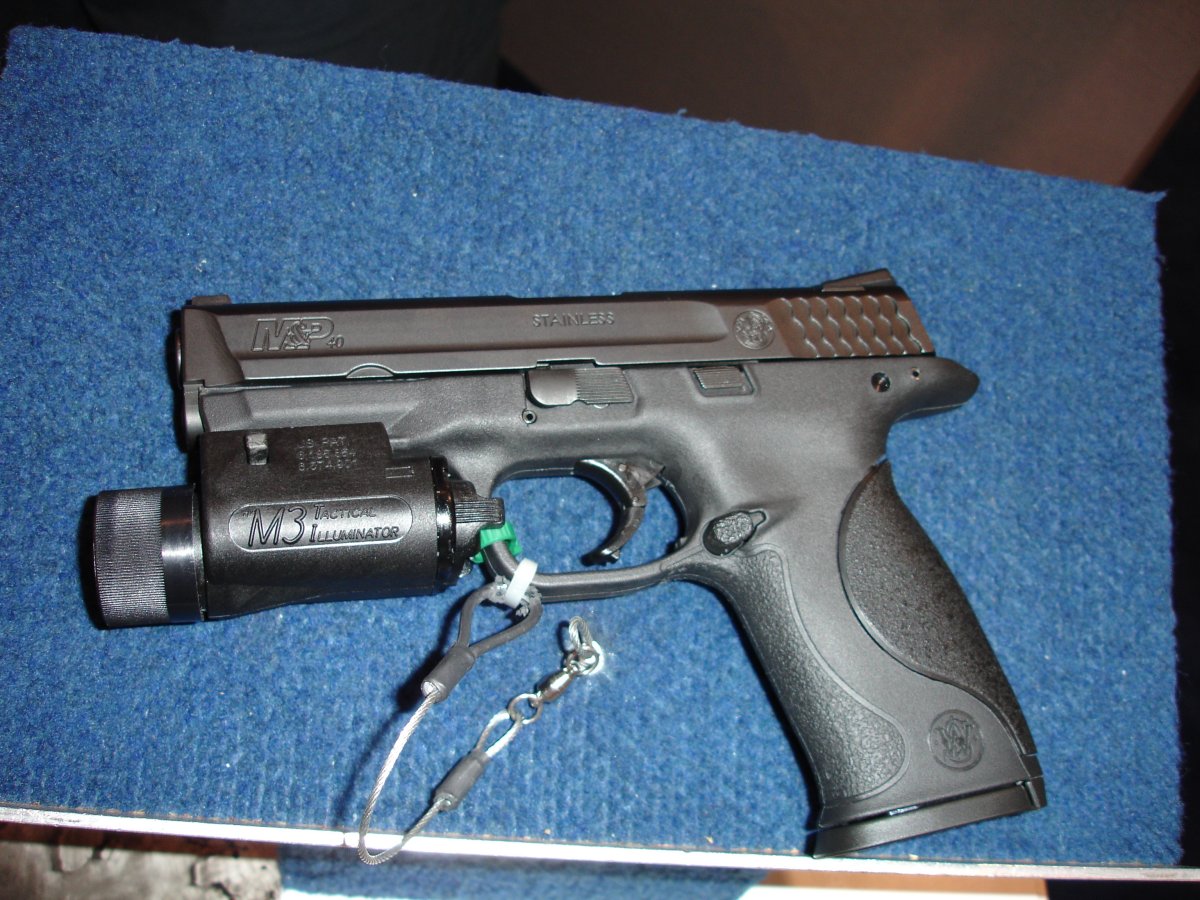 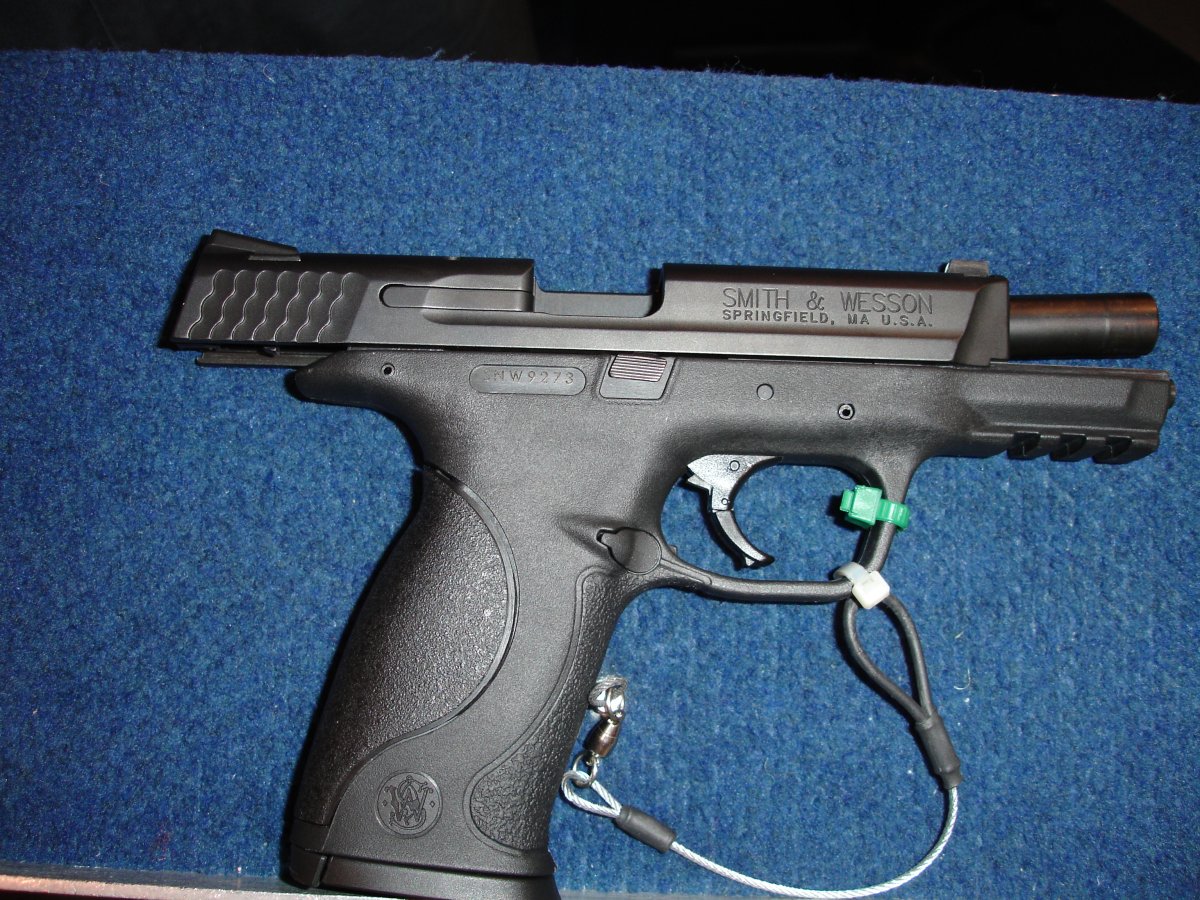 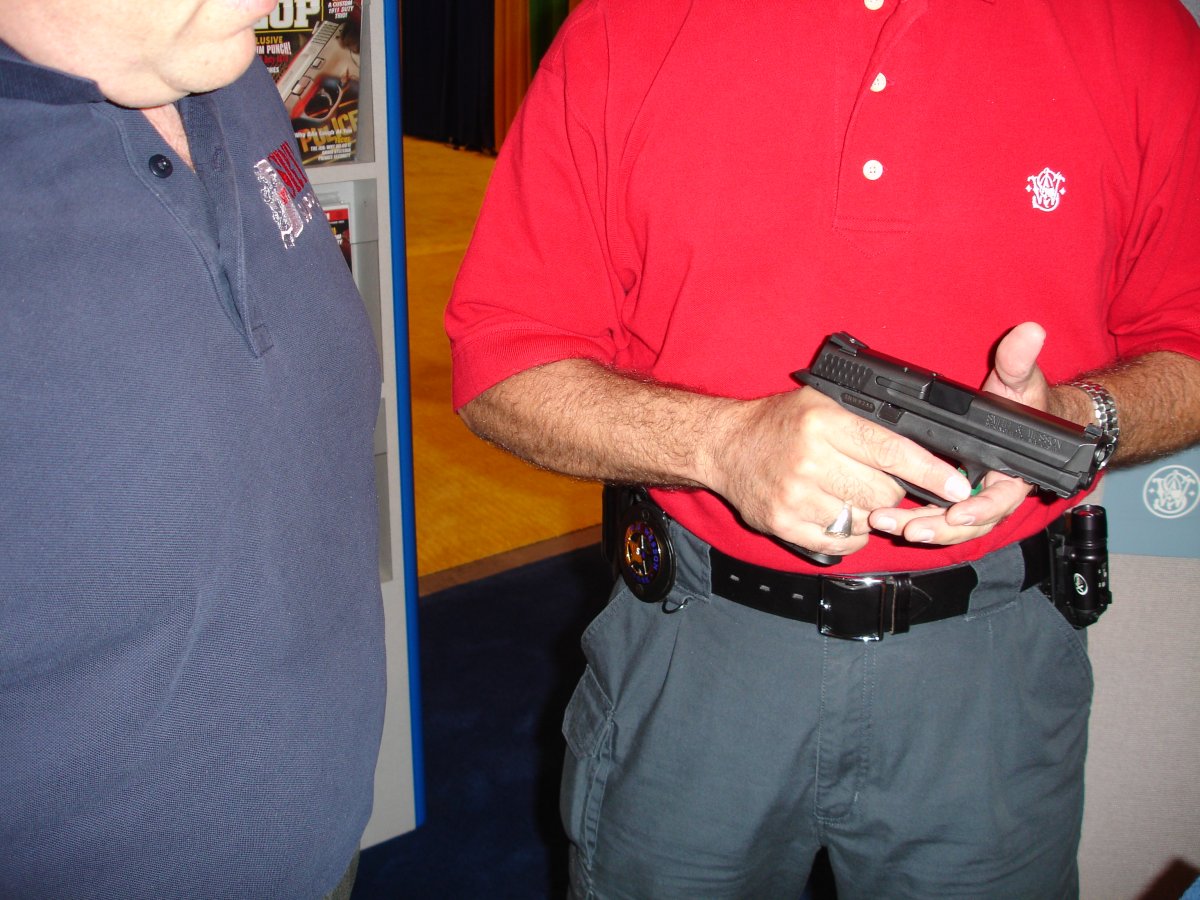 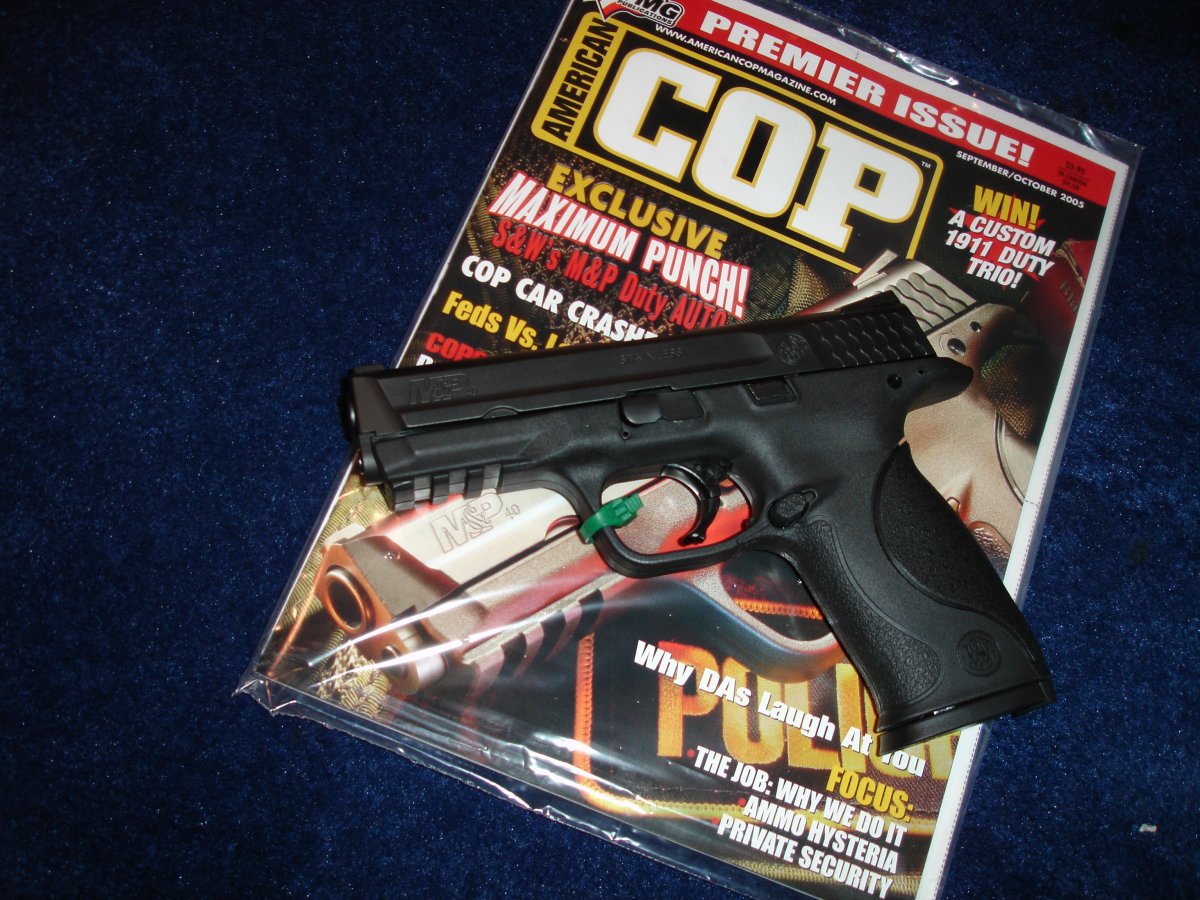 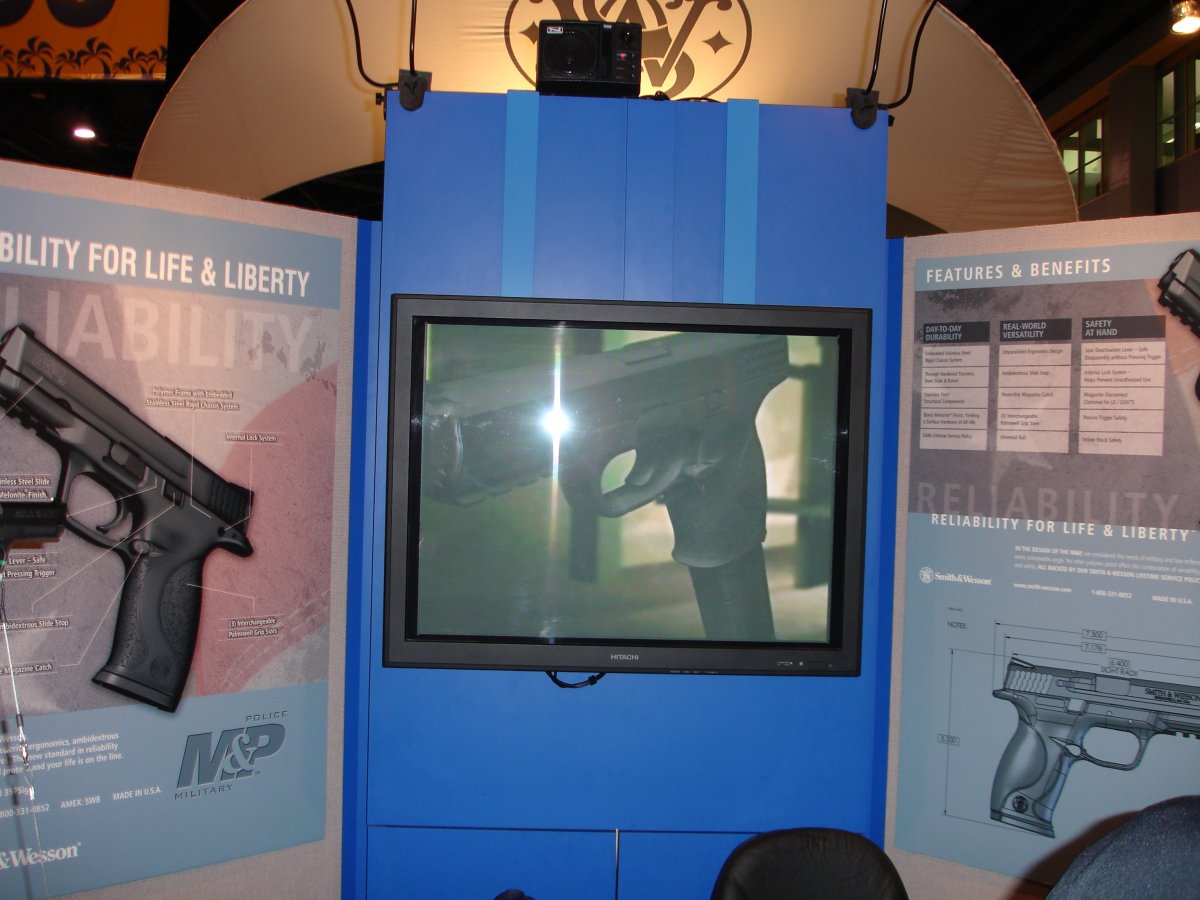 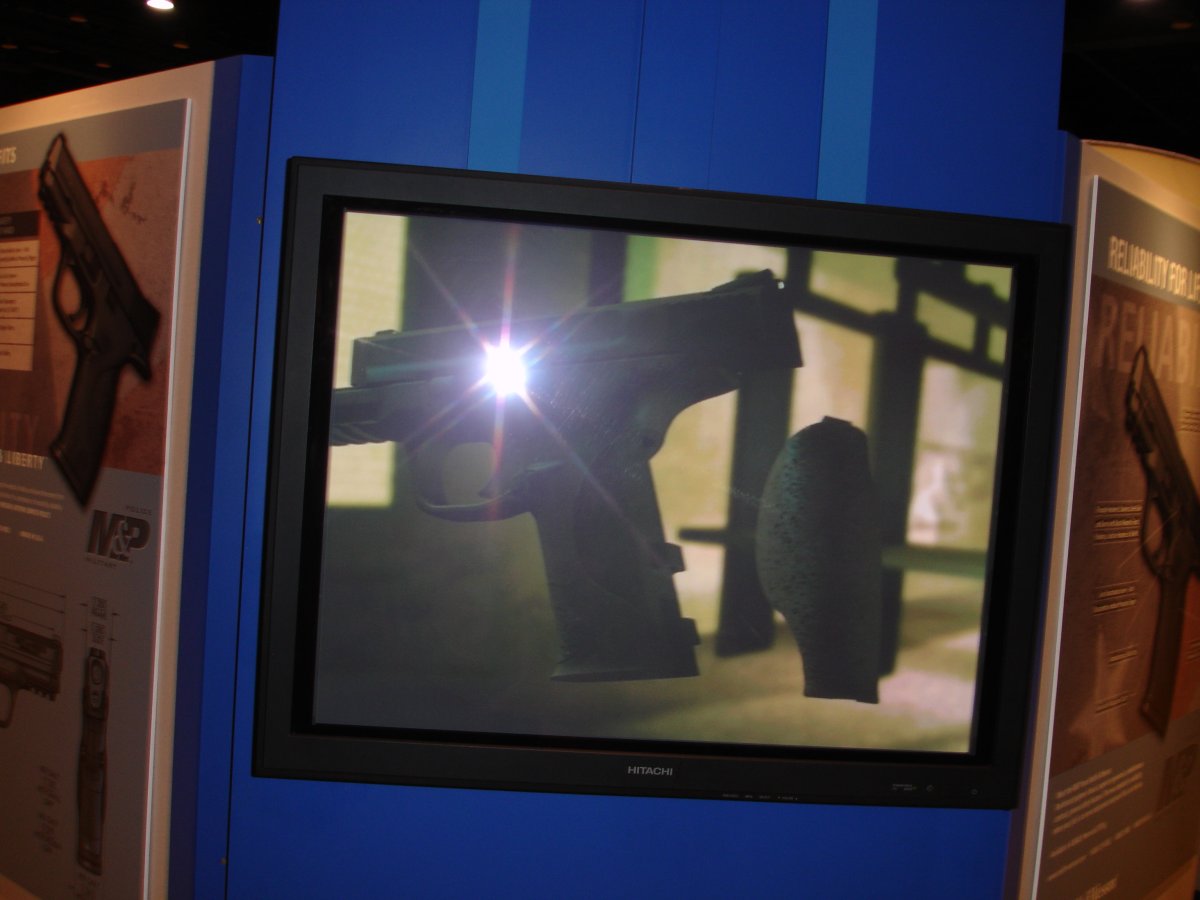 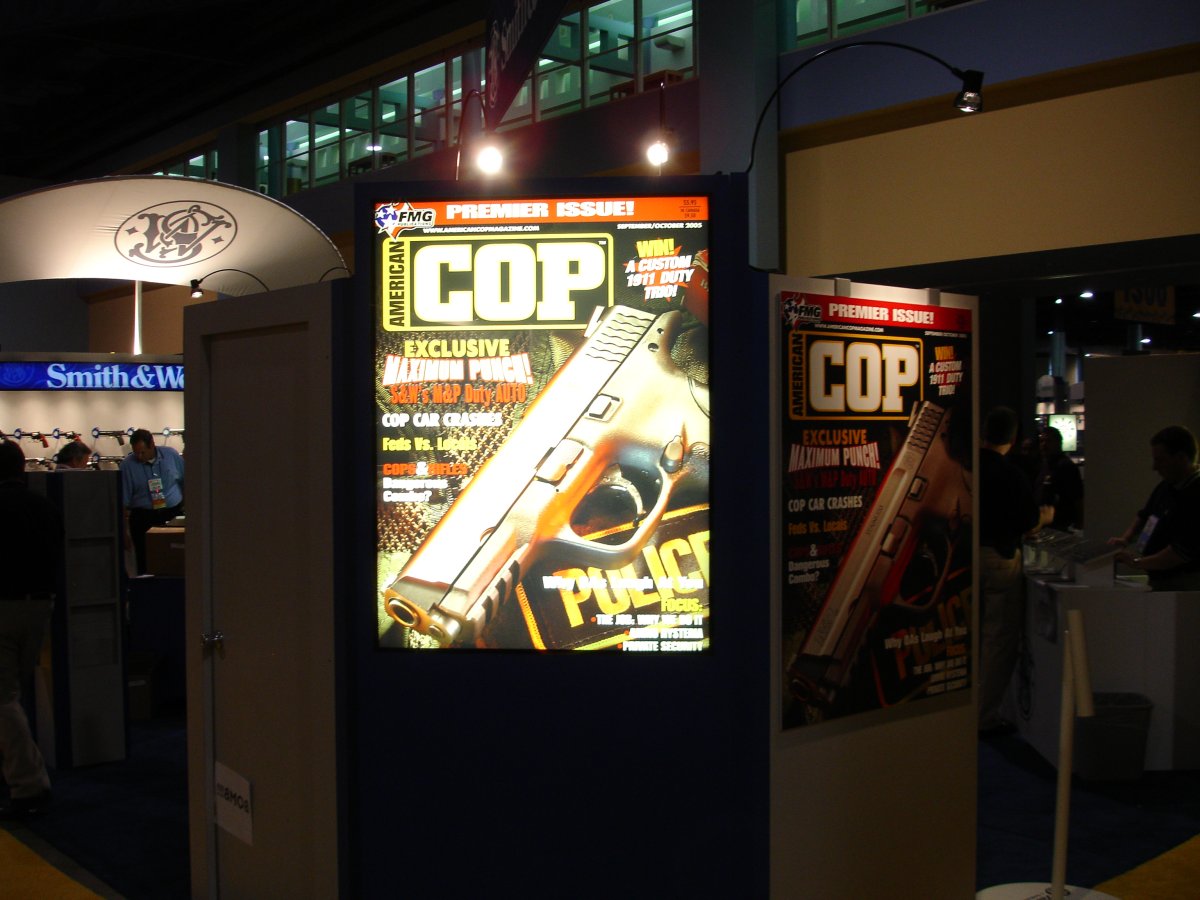 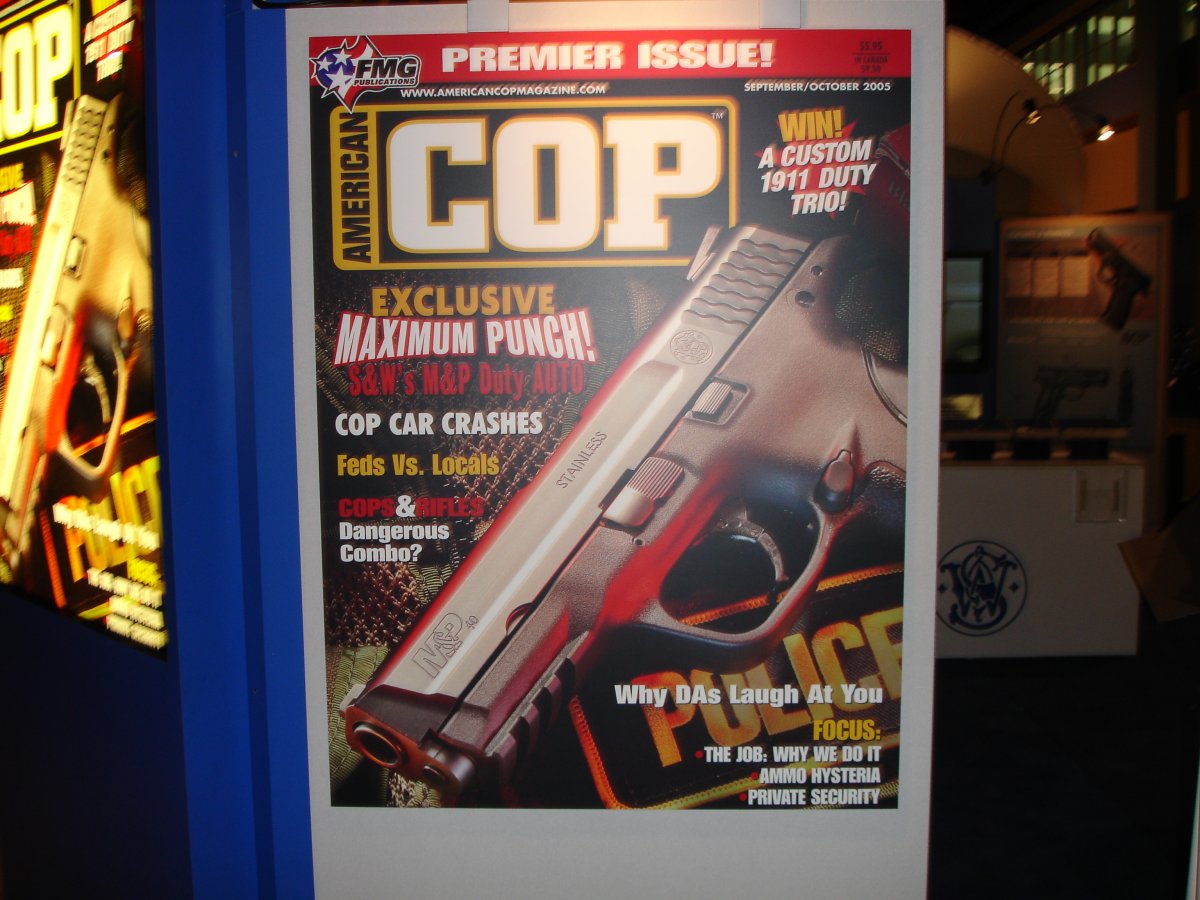 David Crane started publishing online in 2001. Since that time, governments, military organizations, Special Operators (i.e. professional trigger pullers), agencies, and civilian tactical shooters the world over have come to depend on Defense Review as the authoritative source of news and information on "the latest and greatest" in the field of military defense and tactical technology and hardware, including tactical firearms, ammunition, equipment, gear, and training.
Previous 5.11 Tactical Series HRT Boots: Fastest Tactical Boots on the Planet?
Next Bushmaster Introduces Prototype 5.56mm Subcarbine/SBR and 9mm Subgun at IACP