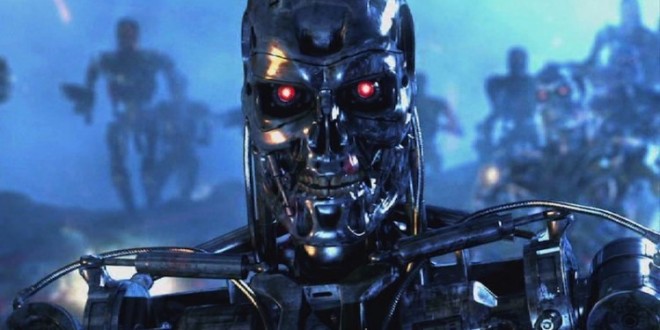 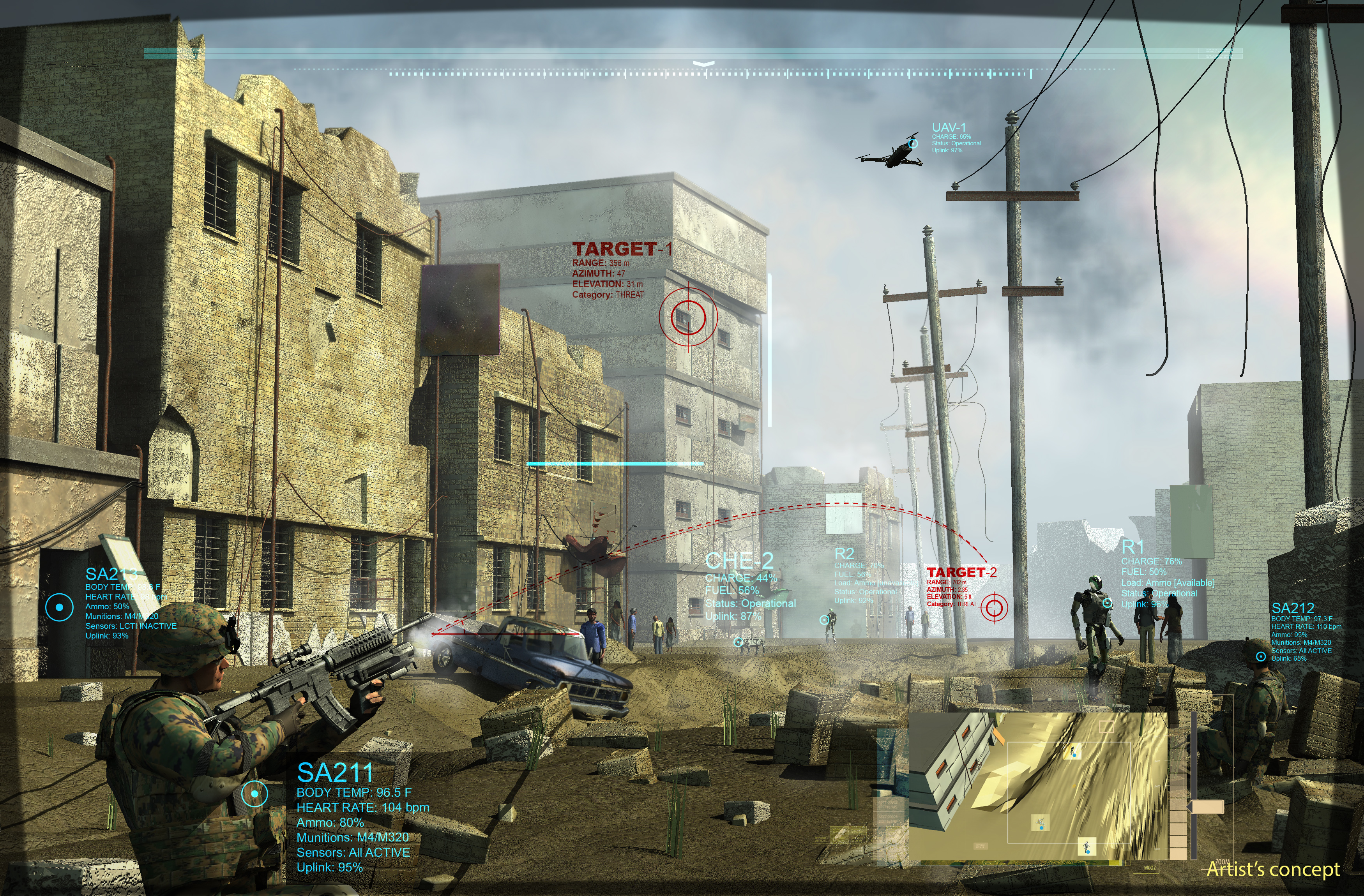 It would appear that the DARPA (Defense Advanced Research Projects Agency) and the DoD (Department of Defense) are well on their way to developing “Terminator”-like robotic warfighters and UAS/UAV/drone aircraft, along with a Skynet-type system to run them. The Daily Mail just published a piece three days ago on Defense One’s piece published a day earlier, in which Defense One states how it’s a “‘wonderful time’ to be a military scientist”, and discusses the U.S. military’s desire for human-assistive, artificially-intelligent (AI) “learning machines”, including air-deliverable-and-recoverable drone swarms like DARPA’s Gremlins a.k.a. “swarm bots“, and robotic boat swarms like ONR’s (Office of Naval Research), the latter of which utilizes a “Control Architecture for Robotic Agent Command and Sensing”, or “CARACaS”, to enable the boats to “operate autonomously, without a sailor physically needing to be at the controls—including operating in sync with other unmanned vessels; choosing their own routes; swarming to interdict enemy vessels; and escorting/protecting naval assets,” according to ONR.

That’s all interesting (if a bit scary), but perhaps the most interesting program discussed in the Daily Mail piece is Squad X Core Technologies (SXCT), which “utilizes augmented reality” to provide dismounted mobile infantry soldiers/warfighters with a multi-facited 3D picture of the battlespace that’s a complete and real-time-combat-useful as possible. When DefenseReview first learned about SXCT, we were immediately interested in it, and intrigued by it. Here’s the juicy part that perked DR’s eyes up from the initial DARPA press release-type article on it: 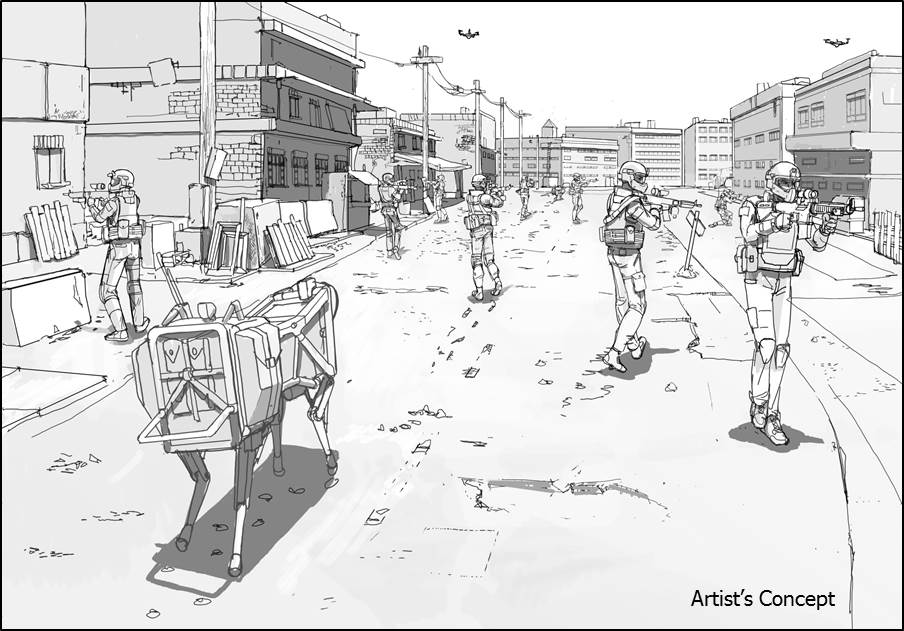 “‘SXCT aims to help dismounted infantry squads have deep awareness of what’s around them, detect threats from farther away and, when necessary, engage adversaries more quickly and precisely than ever before,’ said Maj. Christopher Orlowski, DARPA program manager. ‘We are working towards advanced capabilities that would make dismounted infantry squads more adaptable, safe and effective.’

Precision Engagement: Precisely engage threats out to 0.6 mile (1,000 meters), while maintaining compatibility with infantry weapon systems and without imposing weight or operational burdens that would negatively affect mission effectiveness

Non-Kinetic Engagement: Disrupt enemy command and control, communications and use of unmanned assets at a squad-relevant operational pace (walking with occasional bursts of speed)

Squad Autonomy: Increase squad members’ real-time knowledge of their own and teammates’ locations to less than 20 feet (6 meters) in GPS-denied environments through collaboration with embedded unmanned air and ground systems” 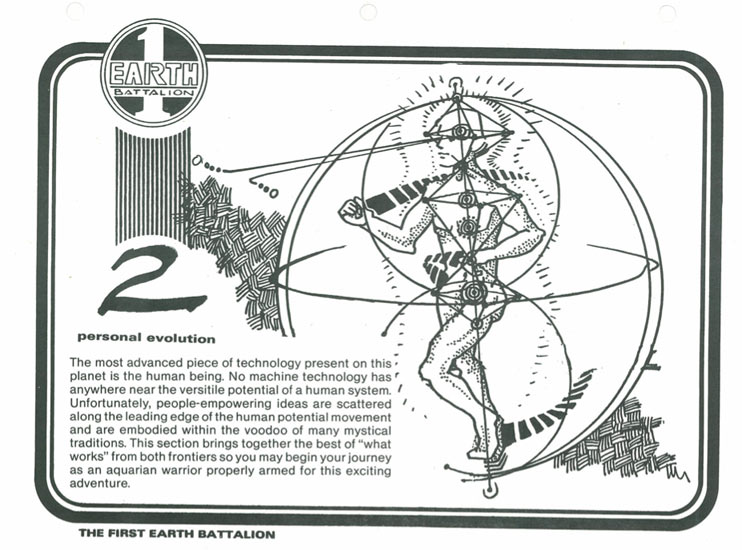 The reason the above intrugued us is that it appeared to by a high-tech hardware-focused augmentation and/or evolution/realization of at least some of the concepts and capabilities discussed in Jim Channon’s “First Earth Battalion Operations Manual: Evolutionary Tactics”, which is/are pretty interesting, and which Defense Review highly recommends to the uninitiated. You can purchase the reprinted version of it from Amazon. We’ve already got our copy.

Anyway, the upshot of all this is that DoD and DARPA think we little, limited humans need some big, bad artificially-intelligent help on all those big, dangerous battlefields. Let’s just hope they don’t bring the dystopian hell of the “Terminator” movies to reality, and we don’t end up having to deal with a real-life version of Skynet and an army of T-1000’s (or even just the more conventional solid-metal Terminator T-800 Model 101’s and/or NS-5 robot/droids) and autonomous armed/weaponized drone swarms, all outfitted with laser weapons, multispectral vision (including thermal/IR and SWIR), and multispectral adaptive camouflage/visual cloaking technology like HyperStealth Quantum Stealth (QS). That would be non-optimal–and perhaps even highly problematic.

Editor’s Note: DR isn’t the only one to have just a wee bit of trepidation about overly-rapid technological advancements, artificial intelligence advancement in particular, and/or the potential repercussions of weaponized robotics development and automation. Some rather well-educated and credentialed folks like Dr. Stuart Armstrong, of the Future of Humanity Institute, University of Oxford think we’re heading down a potentially very dark, scary and ultimately suicidal technological path.

Rise of the Robot Soldier and Squad X Core Technologies (SXCT): ‘Terminator’-Like Artificially-Intelligent (AI) Cybersoldiers and Drone and Boat Swarms to Augment Infantry Warfighters with Total, Multi-Perspective 3D Battlefield Awareness, or just Kill all of Us? by David Crane

David Crane started publishing online in 2001. Since that time, governments, military organizations, Special Operators (i.e. professional trigger pullers), agencies, and civilian tactical shooters the world over have come to depend on Defense Review as the authoritative source of news and information on "the latest and greatest" in the field of military defense and tactical technology and hardware, including tactical firearms, ammunition, equipment, gear, and training.
Previous Northrop Grumman NG Air Dominance (NGAD) Low-Observable/Stealth Multirole and Potentially-Supersonic ‘Superjet’ Jet Fighter Aircraft Prototype Armed with Laser Weapons/Cannon!: Hittin’ the ‘Sweet Spot’ with the ‘Baby B-2’ F/A-XX
Next DARPA/Northrop Grumman ‘Tail-Sitter’ UAS/UAV/Drone Aircraft for Airborne Recon (Reconnaissance) and other Missions: Can it be Gun/Laser-Weaponized for Combat? Why not?