The following article contains a digital photo of the new Corner Shot 40™ 40mm "Around-the-Corner" Personal Grenade Launcher (PGL). As far as DefenseReview is aware, this is the first information-with-picture to be published on the new weapon system.
Back in December, 2003, we published an article on CornerShot, which impressed us at SWAT Round-Up 2003. The article was titled "Corner Shot. ‘Cause You Never Know What’s Waiting for You Around the Corner.". Well, this little story out of Israel just keeps gettin’ better, because the company has just released a new 40mm grenade launcher version of the system called the Corner Shot 40™ Personal Grenade Launcher (PGL). That’s right. Now, military Spec-Operators and private military company (PMC) operators will be able to go 40 mike-mike on the badguys from around the corner while conducting urban warfare and counterinsurgency operations–quite a big step up from NATO Std. 9mm Parabellum (9x19mm) pistol and submachine gun ammo, which is one of the calibers the original CornerShot around-the-corner weapon system utilizes (along with other semi-auto pistol calibers like .40 S&W and .45 ACP, since it will accept just about any Mil/LE-applicable semi-auto pistol).
DefenseReview would actually like to see a six-round revolver-action version of the system that would offer all the advantages of the Milkor MGL Mk-1S Multiple Grenade Launcher and Corner Shot 40™ PGL, combined. However, a six-round version would probably be unwieldy/too front-heavy and create too wide a signature, as the Corner Shot 40™’s design places the launcher up front. That would mean 6 rounds and the revolver mechanism (with cylinder) up front. That would be a lot to have to swing around a corner.
Here’s what the company has to say about the CornerShot 40™ 40mm Personal Grenade Launcher (PGL) and standard model Corner Shot system in their most recent marketing/press release literature:… 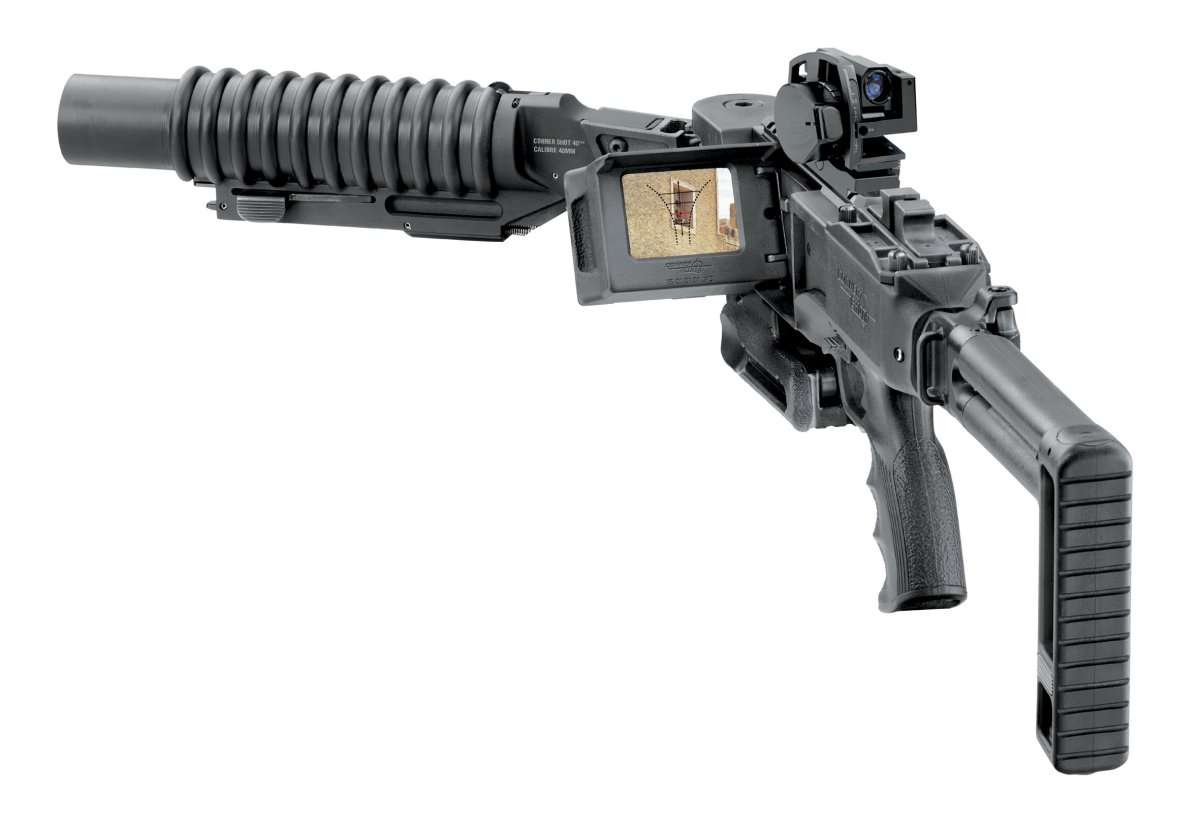 "The inventors of the Corner Shot™ system now offer the same outstanding concept in a new 40mm version. The new CornerShot 40™ is based on the outstanding features and capabilities of the original Corner Shot™ system. The new model offers the increased firepower extended range, and enhanced cover fire of a 40mm launcher. This system is also available to police and other law enforcement agencies in 37mm.

The Corner Shot™ system is a high-tech weapon system that enables military, law enforcement and security operators to effectively observe and engage targets from around the corner / behind cover without exposing any part of the operators body and thus reducing the liability to the operator.
The CornerShot™ concept – patented worldwide – has been tested and is currently employed by Special Forces, military units, and law enforcement agencies around the world.
Las Vegas, Nevada – 28 January 2005: Corner Shot Holdings, L.L.C. the manufacturer of the Corner Shot ™ line of products that can shoot around corners, is proud to announce the worldwide release of a new product – the “Corner Shot 40™” system. This system provides the ability to observe, acquire and engage targets from “around a corner/ or behind cover” using a 40mm Projectile Launcher.
The Corner Shot 40™ weapon system enables security forces to remain behind cover whilst engaging targets. The CornerShot 40™ system includes a small, high-resolution video camera and monitor, through which the operator can view targets located “around the corner” in real time. The video camera enables the operator to scan the area “around the corner” or “in the next building” prior to pinpointing and engaging the targets therein. Alternately, the video image may be transmitted to other elements or up linked to a rear area command post or central command.
The Corner Shot 40™ system enables the operator to view the targets and aim the launcher using the LCD monitor mounted in the rear section of the system. We have incorporated many new innovations to this device. The CornerShot 40™ can utilize a variety of 40 mm caliber special-purpose projectiles, such as high-explosive grenades, smoke grenades, illumination grenades with parachute, less/non-lethal fragmentation projectiles, tear gas and OC (irritant) projectiles. 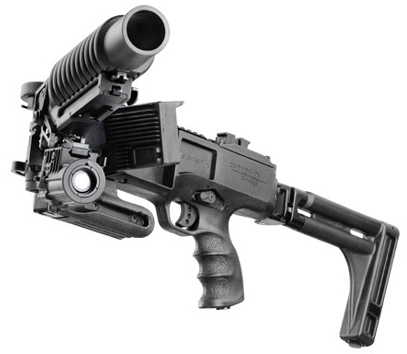 All of these munitions may be launched from the left to the right, inside buildings and between buildings, door steps and through door openings, up or down from roof tops in a safe and simple and highly accurate manner. In the mean while the operator can effectively observe and cover a high-risk area without exposing himself to enemy fire. Urban combat operations especially inside buildings and blocks of buildings -is the single most significant characteristic of urban warfare that sets it apart from all other warfare types. This has necessitated the development of purpose-specific weapon systems, in order to provide a satisfactory solution to the specialized problems of this type of warfare. The all-new Corner Shot 40 ™ addresses many of these problems and offers solutions un-available up until today. The CornerShot 40 ™ affords the combat units devastating firepower, pinpoint accuracy whilst “Around-the-Corner” allowing the operators to defeat vehicles, enemy emplacements, massive suppressive cover fire as well as a highly effective smoke screen. Use of the Corner Shot 40 ™ system will reduce the liability of the operators in the field or theater of operation.
Corner Shot 40™ Features:
– “Around the Corner” lightweight, breech-loading, single-shot 40 mm launcher. – Day and night operational ability. – Manual operation, single shot “pump” type action ejects the spent cartridge and enables the feeding of a new round. – Video observation & sighting system with transmission capability. – Verity interchangeable cameras. – Laser and Infra red laser. – Fires all 40mm grenades, less/non-lethal ammunition, irritant & tear gas projectiles. – Ergonomically designed. – Universal accessory rail. – Folding stock.
CornerShot 40™ Technical Data:
– Weight: 4.4 Kg / 9.5Lbs. – Length: 900 mm / 35.4” (open stock) 730mm/28.7”. (close stock). – Rifling: 6 grooves, rh, 1 twist in 1.2192 m / 48”. – Muzzle velocity: 74.7 Mps / 245’ Fps (M-406 grenade). – Effective range for precision fire, single target: 150 meters. – Effective range for area coverage using fragmentation munitions: 350 meters maximum.
For more information or to set a meeting with a Corner Shot executive at the 2005 SHOT Show, January 28 – 31, please contact:
Tal R. Elhyani Director, International Public Relations Koteret Public Relations Tel: 972-3-561-1424 ext.152 Fax: 972-3-561-1238 Mobile: 972-54-497-0346 E-mail: [email protected] http://www.koteret.com
About Corner Shot Holdings LLC:
Corner Shot Holdings LLC was founded by two former senior officers of the elite units of the Israel Defense Forces with partners. The Company has its headquarters in Miami, Florida with Research and Development facilities in Israel. The Corner Shot™ & Corner Shot 40™ systems were invented by Amos Golan and developed together with Asaf Nadel. The sales network of Corner Shot Holdings LLC is based on direct sales and utilizes highly qualified certified agents strategically positioned around the world. Visit our website at: http://www.cornershot.com.
CVs:
Amos Golan, Company co-founder & Managing Director, retired from the Israel Defense Forces in 1995 at the rank of Lieutenant Colonel. He served as a commander and trooper in various elite and counter-terror units. Amos Golan lead a joint team highly skilled engineers, technicians and weapon specialists for R&D in the production of the CornerShot™ & CornerShot 40™ systems.
Asaf Nadel, Company co-founder and President, served as a Major in the IDF Armored Corps and subsequently in various security positions around the world with the Israeli Ministry of Foreign Affairs and El-Al (Israel airlines).
Doron Tamir, a retired Brigadier General, was formerly the Israel Defense Force’s Chief Intelligence Officer. Currently, Mr. Tamir is the C.E.O at Corner Shot."
Click here to see a large/hi-res digital photo of the Corner Shot 40T 40mm grenade launcher.
Click here to read DefRev’s original article on the CornerShot, titled Corner Shot. ‘Cause You Never Know What’s Waiting for You Around the Corner."
Click here to read the addendum to that article (above) that contains links to digital pics of the Corner Shot brochure/spec sheet.
Click here to go to read our article on the CornerShot Action Video. The article contains links to the video (which you can download to your computer and then view), which, in turn, contains footage of Israeli commandos using the Corner Shot in mock/demonstration CQB (Close Quarters Battle)/Urban Warfare scenarios. The article also contains links to a video clip of Fox’ News’ interview with Amos Golan, Corner Shot’s inventor/developer, who explains and demonstrates the Corner Shot during the interview. You can download this video to your system, as well.
New Corner Shot 40™ 40mm Grenade Launcher: ‘Around-the-Corner’ Force Multiplier by David Crane

David Crane started publishing online in 2001. Since that time, governments, military organizations, Special Operators (i.e. professional trigger pullers), agencies, and civilian tactical shooters the world over have come to depend on Defense Review as the authoritative source of news and information on "the latest and greatest" in the field of military defense and tactical technology and hardware, including tactical firearms, ammunition, equipment, gear, and training.
Previous New Remington 870 Modular Combat Shotgun (MCS) and 870P MAX for Mil/LE Apps
Next Protonex Awarded USAF Contract for Unmanned Aerial Vehicle (UAV) Power Source