Man, this is a cool product. I recently got the opportunity to handle it and see it demonstrated at SWAT Round-Up 2003 in Orlando, Florida, and came away from that session extremely impressed.
The Corner Shot was designed and developed by Corner Shot’s CEO, Amos Golan, to allow military Spec-Ops/Counterterrism and LE SWAT personnel to be able to see and shoot around corners without exposing themselves to deadly return gunfire from the badguys. That’s basically the whole concept–see and shoot the badguys before they can see and shoot you. The CornerShot accomplishes this by… 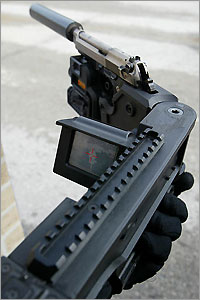 Located directly under the swing-out/flip-out video monitor is a lever that operates in swinging fashion just like the lever on a BB gun. However, unlike a BB gun, instead of acting as a pump, the Corner Shot’s lever allows the operator to very quickly swivel the pistol in either direction, depending on the direction of the corner and hostile threat, and then turn it back again just as quickly. Asaf Nadel, Corner Shot Holdings L.L.C.’s president and resident demonstrator at their booth, was able to accomplish this action very quickly. That said, the Corner Shot does require some practice for the operator to get the hang of this procedure to the point that this operation becomes second nature and as fast as possible.
The front of the Corner Shot is designed as a swivel-mount for modern semi-auto pistols like Glocks, SIG’s, HK USP/P2000’s, etc. A camera lens is attached to the front of the swivelling pistol mount, and a white light is mounted underneath the camera. Mounted on the left side of the "receiver" is a flip-out/swing-out camcorder-style video monitor–only the Corner Shot’s video monitor features a sighting reticle and is heavily reinforced for hard use, just like the rest of the unit. Control buttons located close to the video monitor allow the operator to turn the camera and monitor on and off and perhaps do a couple more things of which DefRev isn’t yet aware.
Here’s how an operator employs the CornerShot (Assuming the the Corner Shot is shouldered and in the neutral position, with the pistol pointed straight ahead): First, flip the manual safety lever down and off. This lever is located directly above the 1911-style trigger. Flip the video monitor w/reticle out and turn it and the camera on (using one of those control buttons). If you’re fighting at night, a second button allows you to turn on the front-mounted white light. Now you’re ready to go. 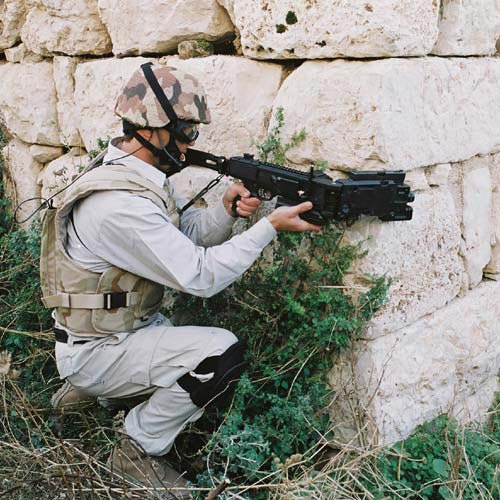 So, let’s say the hostile threat/terrorist/badguy is around the corner to your right. Just swing the undermounted "cocking" lever to the left in order to release and swivel the pistol mount section to the right . You then swing the lever back up and to the right towards the center (so it’s now back in line with the "receiver", and lock it back up underneath the "receiver". This locks the pistol mount section in the right-pointing direction. Now all you do is move the gun past that right corner while you keep your eyes on the video monitor for the badguy. When you see the badguy, just "lock him up" by putting the center of the reticle on the spot you want to hit, and pull the trigger. One could say the Corner Shot gives a whole new meaning to the idea of "shooting video". Anyway, once you’ve taken the shot(s), use the monitor to observe the effects on the target. Repeat as necessary. It’s really that simple.
If you have a hostile subject/terrorist/badguy around the leftside corner, just perform the procedure in opposite to that described above by pulling down and swinging the "cocking/pump" lever to the right and back, and locking the gun in the left-pointing direction.
While reading about the whole pistol-swivelling operation/procedure might make it seem somewhat slow and involved to someone who’s never actually seen it performed, it’s actually quite the opposite. A skilled/experienced operator can accomplish this operation in one very fast, fluid motion.
With CornerShot, the operator can perform a speed-reload of the attached pistol almost as quickly as a standard speed reload.
It’s important to note at this point that just because an operator gets a visual/sighting lock on a BG (badguy), it doesn’t necessarily follow that he need to pull the trigger on the subject, especially in an LE SWAT scenario. In this situation, the Corner Shot can be used to simply monitor the hostile subject/hostage taker from a relatively safe position. SPECOPS/Counterterrorism operations are an altogether different story. Target neutralization/liquidation is often the goal of this type of endeavor. In this case, the CornerShot will allow for a very fast and accurate shot from cover. 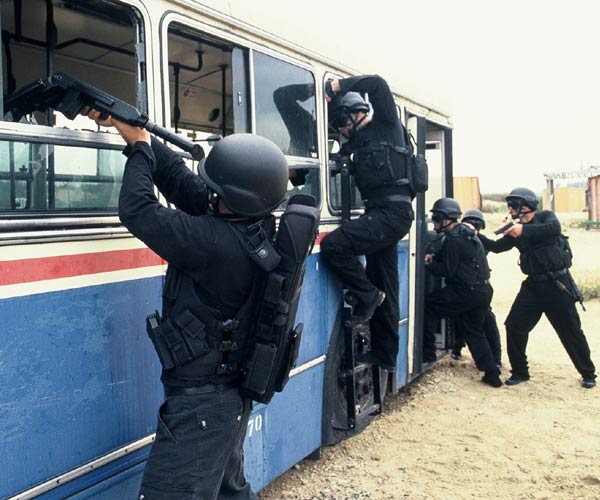 The Corner Shot features a short M1913 Picatinny rail for mounting optical gunsights just in case you have to shoot straight ahead or while you’re out in the open. The optical gunsights DefRev recommends are the EOTech 552 HDS (Holographic Diffraction Sight) (or EOTech 551 HDS) and the Aimpoint CompM2 red-dot sight. The CornerShot also features a Galil-style side-folding buttstock, and has a little weight to it (not too much), which inspires confidence and really makes the unit feal like sort of a blocky rifle in your hands. DefRev will try to get the exact specs on the weight of the Corner Shot. The CornerShot appears to be made of high quality high-impact polymer, and appears to be (and feels) extremely sturdy and durable.
DefRev shot video of Asaf Nadel demonstrating the Corner Shot at SWAT Round-Up 2003, and we’ll try to get that video up on our site as soon as possible. We’ll also try to get Corner Shot’s brochure up on DefRev quickly.
Organizations or individuals interested in inquiring about or purchasing the CornerShot should contact Asaf Nadel by phone at 305-442-6322, or via email at [email protected] for more info, pricing, and availability. DefRev just has one word of caution for you: Beware the sticker shock you’re likely to experience when you ask Asaf about the price of this thing, and he answers you. Actually, I’ll spare you the experience–if I remember correctly, Asaf told me the Corner Shot costs somewhere between $7,000 and $7,500 (I don’t remember the exact amount). Yikes! I remember, when he first told me how much it was, I was like "Whoah…That’s no joke." Let’s just say the Corner Shot is most likely a good bit outside the financial range of most small U.S. police departments and private citizens (not that it was designed for that demographic).
High price or not, I really like this thing. The CornerShot is one of the coolest and most interesting tactical tools I’ve seen in awhile. I must say I’m not surprised that it was a group of Israeli’s that came up with it and developed it. After all, the Israeli’s have more experience with terrorists/terrorism and urban warfare than most other peoples, and their very survival depends on being able to develop creative and innovative solutions to the serious combat challenges they face on a daily basis. 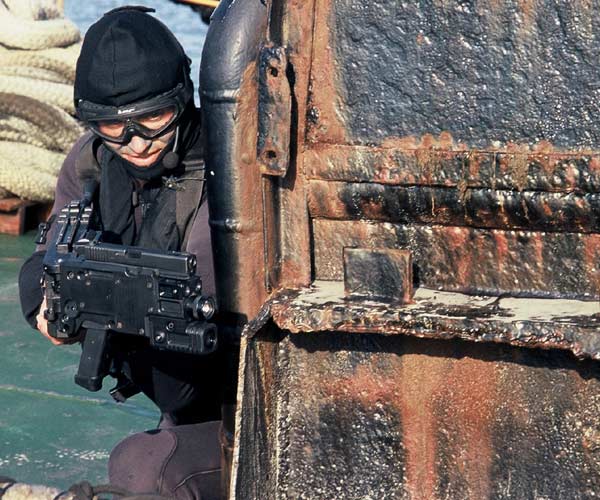 One final note: I believe it would be better to make Corner Shot all one word, like this: "CornerShot". From a marketing perspective, "CornerShot" just looks cooler to me on the page. This is how I was typing it before I noticed that the company writes it as "Corner Shot" in their brochure. Maybe I’m wrong in this opinion, but I don’t think so.
You can visit the Corner Shot website by clicking on this link.
Addendum 12/07/03:
Based on their brochure, it would appear that the Corner Shot is also available with a side folding CAR-15/M4 Carbine-style collapsible/telescoping buttstock (padded).
Corner Shot. ‘Cause You Never Know What’s Waiting for You Around the Corner. by David Crane

David Crane started publishing online in 2001. Since that time, governments, military organizations, Special Operators (i.e. professional trigger pullers), agencies, and civilian tactical shooters the world over have come to depend on Defense Review as the authoritative source of news and information on "the latest and greatest" in the field of military defense and tactical technology and hardware, including tactical firearms, ammunition, equipment, gear, and training.
Previous NewMatics PM16 and Laser Sim Urban Warfare/CQB Training System. Exclusive Video!
Next Addendum: Corner Shot Brochure Pics (Complete).