DefRev discovered this item at SWAT Round-Up 2003 back in November at the Lewis Machine & Tool Co. (LMT) booth. It’s called the "MRP", which stands for "Monolithic Rail Platform". While the MRP is interesting, the most interesting aspect of the system is the quick-change barrel feature.

MilitaryMorons.com (a very cool and informative site, by the way) has some…

good information on the LMT MRP/QCBS on this page . MilitaryMorons.com is an excellent source of info on tactical weaponry and equipment/gear. DefRev really likes this site.

SpecwarGear.com has a couple of good pics of the LMT Monolithic Rail Platform, as well.

DefRev isn’t quite sure why Lewis Machine & Tool (LMT) decided to go with an integrail receiver/rail. If the rail portion gets damaged badly enough, it would seem that one would have to replace the entire upper receiver, which couldn’t possibly be cheap. Same thing goes with damaging the non-rail portion of the upper receiver. Having to scrap both rail system and upper at the same time is problematic from both an operational and economic standpoint. Unless you can replace the whole thing, you’re out of the fight. The quick-barrel change system is neat, though.

David Crane started publishing online in 2001. Since that time, governments, military organizations, Special Operators (i.e. professional trigger pullers), agencies, and civilian tactical shooters the world over have come to depend on Defense Review as the authoritative source of news and information on "the latest and greatest" in the field of military defense and tactical technology and hardware, including tactical firearms, ammunition, equipment, gear, and training.
Previous Stavatti SF-1 Gasdynamic Laser Rifle. Individual Combat Weapon of the Future?
Next Baker Batshield: Advanced Ballistic Shield for LE SWAT Operations. 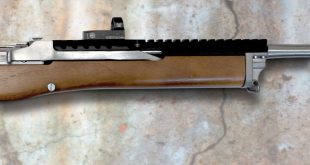