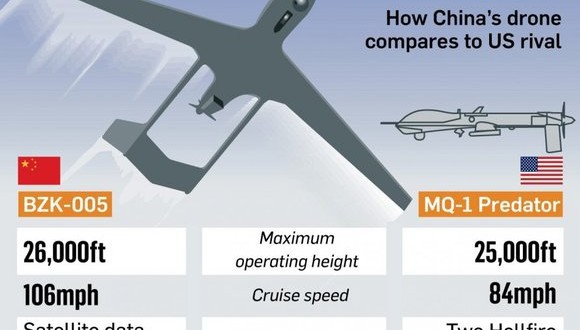 The Sunday Times published an article yesterday on a Sino-Japanese incident involving a Harbin BZK-005 UAS/UAV/drone aircraft getting a bit too close to Japan, close enough to cause the Japanese to scramble F-15 fighter aircraft to intercept it. The part that's interesting is the BZK-005's apparent, which would appear to at first glance to exceed those of the General Atomics MQ-1 Predator UAS, however that's not really the case, since the MQ-1 Predator carries two (2) Lockheed Martin AGM-114R Multi-Purpose HellFire II missiles, the more advanced and capable General Atomics MQ-1C Gray Eagle carries up to four (4) AGM-114R HellFire II missiles, and the real bad boy, the General Atomics MQ-9 Reaper/Predator B multi-mission ISR and strike UAS/UAV, carries up to 14 AGM-114R HellFire II's. In fact, the MQ-9 can carry up to 3,850 pounds and fly at speeds of up to 276 mph (444 km/h).

So, it would appear that the Chinese are still a little ways off from achieving actual UAS/UAV-parity with the United States. Here's the Sunday Times' graphic, that DefenseReview (DR) found to be a bit sensationalistic: 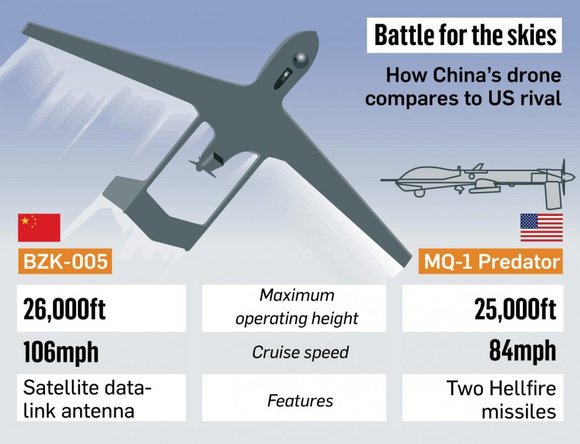 In other words, the BZK-005 doesn't worry us, even though the Harbin is obviously a harbinger of things to come–but there are systems the Chinese military is currently working on that do.