All photos contained in this article were taken by U.S. Army Cpl. Benjamin Cossel and are the property of the U.S. Army and the Department of Defense (DoD). Click on photos below to view them full-size.
There’s a military UAV (unmanned aerial vehicle) that’s been getting some pretty rave reviews from U.S. military pesonnel lately, called the RQ-11A Raven. The Raven UAV, manufactured and marketed by AeroVironment (Monrovia, CA), is a compact, lightweight, hand-launched Small UAV (or, SUAV) that can be prepared and launched in minutes for the purpose of conducting aerial Intelligence, Surveillance, and Reconnaissance (ISR) missions during infantry combat operations, including urban warfare operations/MOUT.
A "brigade-level asset", the 4.18 lbs (1.9 kg) AeroVironment RQ-11A Raven SUAV is currently being employed for… 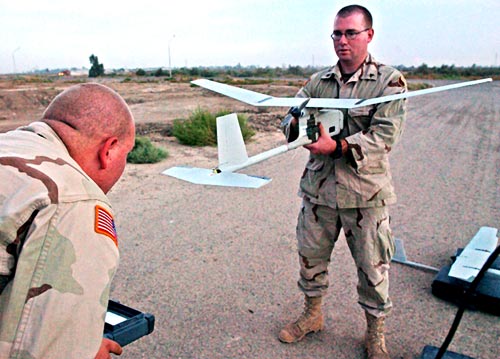 a number of force protection/tactical missions, including (but not limited to) IED (improvised explosive device) searches, reconnaissance patrols, and perimeter security (including base security). And, that’s not all. According to Sgt. Christopher Windle, Raven Team Leader for U.S. Army Task Force 1-7 (TF-17), the Raven SUAV "would be great for a FIST (Fire Support Team) to have, to be able to see a few more kilometers out there" for adjusting/aiming artillery fires. Sgt. Windle was trained as a Fire Support Team Chief prior to deployment with TF 1-7. Lt. Col. Kyle M. CcClelland, commander of TF 1-7 has been quoted as saying that the Raven "is critical in reducing the TTT (Troops to Task)". Because of this, it will most likely reduce U.S. infantry casualties, since human assets won’t have to be committed to those tasks that the Raven can handle within it’s operational envelope. 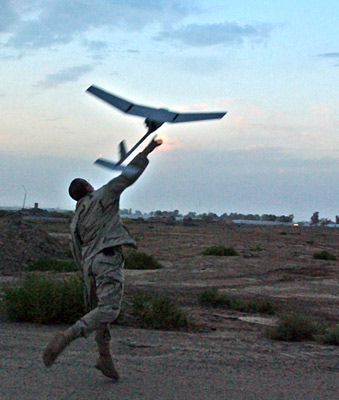 The Raven SUAV only requires three soldiers to operate it, and doesn’t require an airfield to launch, since it’s throw-launched. It can be utilized for both daytime and night operations, anytime there’s a requirement for immediate, short range/low-cost real-time intelligence without risking human assets. Total situational awareness of the battlespace is one of the primary goals of the U.S. Army’s Future Force Warrior (FFW) and Future Combat Systems (FCS) programs, so the Raven unmanned aerial vehicle should fit right in with those programs and any other future infantry programs that spring up. The name of game for future infantry would appear to be maximum telepresence, where unmanned vehicles of all types–UAVs, UCAVs (Unmanned Combat Air Vehicle), UGVs (Unmanned Ground Vehicle), and UGCV (Unmanned Ground Combat Vehicle)–are wirelessly linked with pilots, ground troops/infantry personnel, and the military command structure/decision makers, so U.S. forces have superior information for tactical decision-making.
The Raven Small UAV can fly and navigate in automatic mode via GPS, flying routes and scanning targets that have been pre-programmed. Or, it can be flown manually by a remote operator.

David Crane started publishing online in 2001. Since that time, governments, military organizations, Special Operators (i.e. professional trigger pullers), agencies, and civilian tactical shooters the world over have come to depend on Defense Review as the authoritative source of news and information on "the latest and greatest" in the field of military defense and tactical technology and hardware, including tactical firearms, ammunition, equipment, gear, and training.
Previous Small Arms Weapons Program Reviewed for Joint Service Potential
Next HK GMG (Grenade Machine Gun) Pics from SOF Week 2005/APBI