This article contains DefenseReview’s interview with the R&D element of Dillon Aero, Inc. on the M134D Gatling Gun/Minigun.

DefenseReview first mentioned the Dillon Aero M134D Gatling Gun a.k.a. M134D MiniGun in our September 2005 article on the BSC AGSS II helicopter gunner simulator, after we saw both systems (M134D and AGSS II) at International SOF Week/APBI 2005 in June of that year (2005). We subsequently mentioned the M134D again in April (2006) when we gave our readers a heads-up on a GI-Factory featured segment on the M134D. The M134D Gatling Gun/Minigun is essentially a 7.62x51mm target-saturation/target-suppression/enemy-suppression weapon designed to totally overwhelm, or "saturate", the target/enemy with 7.62mm rounds, so that said target is neutralized very quickly, with minimal capability of fighting back or even continuing to operate at all. In other words, the M134D is designed to put so many rounds onto the target so quickly, that the target is destroyed virtually immediately. The M134D is most often deployed on/employed from military helicopters like the UH-60 Black Hawk and MH-6 Little Bird.

As it happens, Dillon Aero has a demonstration video (link provided below) showing the M134D outhitting an FN M240-series GPMG (General Purpose Machine Gun) by a ratio of approx. 9 to 1 (9:1 hit-ratio advantage) when both are fired from a hovering helicopter at a fixed metal target (target distance and size not disclosed). The M240 gets 12 hits on target. The M134D gets more than 110 hits, with correspondingly greater "shot density".

One of the latest developments over at Dillon Aero is the… 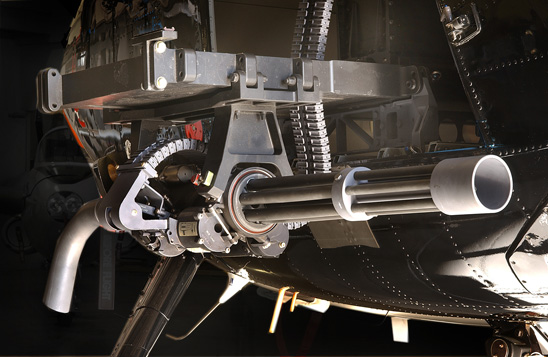 M134D-T Titanium Gatling Gun a.k.a. M134D-T MiniGun variant, which cuts approx. 13 lbs off the weight of the system vs. the standard M134D Steel Gatling Gun variant by skelotonizing certain components in addition to replacing some steel components with titanium ones. 13 lbs represents an approx. 20% weight reduction. The M134D-T is designed specifically for weight-critical high-altitude/high-heat helicopter applications/operations. Dillon Aero claims that the M134D-T is just as reliable as the standard (steel) M134D.

Back in 2005, I (David Crane) interviewed the R&D director at Dillon Aero Inc., who explained to us that in upgrading/improving the gun, they started with the heart of the gun, the Feeder/Delinker (re-designing it), and "worked their way back through the gun and wound up re-designing every part in it." The following are excerpted portions of that interview: 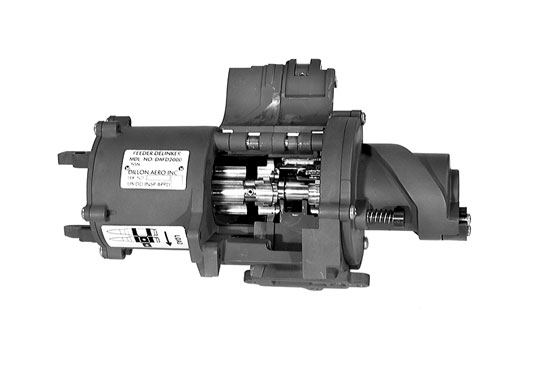 Dillon Aero R&D (DA): [We] started by eliminating some of the problems with the Feeder/Delinker, which is component of the gun that is actually separate from the gun. It’s not an integral part of the gun. When you’d have a feed jam on the old gun system, you had to physically remove the Delinker from the weapon to clear your jam. So, you were looking at anywhere between 10-20 minutes of down time while you were fixing the problem.

Crane: And now you don’t have to remove it.

DA: Correct. We added a couple of access doors onto the Feeder/Delinker, so when you have your jam, you just pop the door open, rip out the brass and links that are jammed up, feed your ammo back up the chute, close your de-linker doors, and, basically, you’re good to go again. [Reducing the time from] 10-20 minutes down to about 2 minutes.

Crane: And, what’d you do there?

DA: Umm…there you’re getting into some of our…

Crane: Something you don’t want to disclose. O.k.

DA: If [extracted] wants to tell you what that is, that’s his thing. 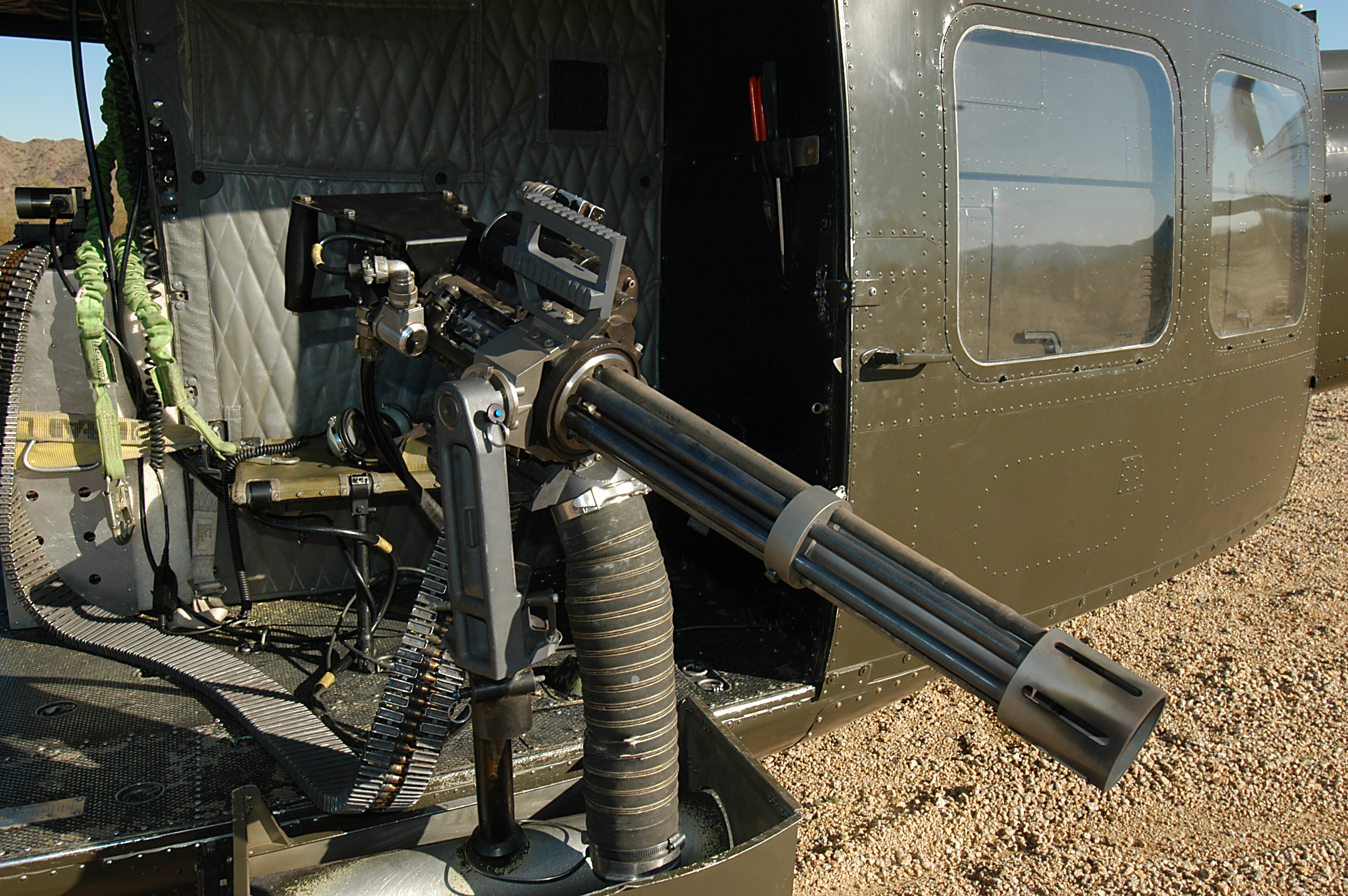 Crane: Anything else about the M134D that [people might find] interesting?

DA: The Feeder/Delinker was the beginning where we made changes, and then once we had improved that, we went to the gun itself. So, we made some of the components a little lighter weight and also improved the reliability of the gun itself.

Crane: And what’s the cyclic rate of the gun, again?

Crane: Is it adjustable?

DA: Umm, in Vietnam, when it was first developed, it started out at six [6,000 rpm]. There may have been six months to a year where they were operating it at 6,000 rounds (6,000 rpm). Then they came back in and added a transmission housing at the motor, and they wen’t to a variable speed–two and four thousand rounds [2,000 rpm to 4,000 rpm]. Now, when we came in and started playin’ around with it, we said well, why don’t you just split the difference with your two and four.

Crane: And just have one speed.

DA: Hang on a second. [Pause–sounds in the background start. Sounds like something being cranked.] In the movie itself, it was about a thousand rounds.

DA: One thousand rounds a minute.

DA: Yeah, they didn’t have a military motor. They used their own motor on the gun for the movie.

Crane: Interesting. Wow, it seems faster than that. Are you sure it was only a thousand rounds a minute? 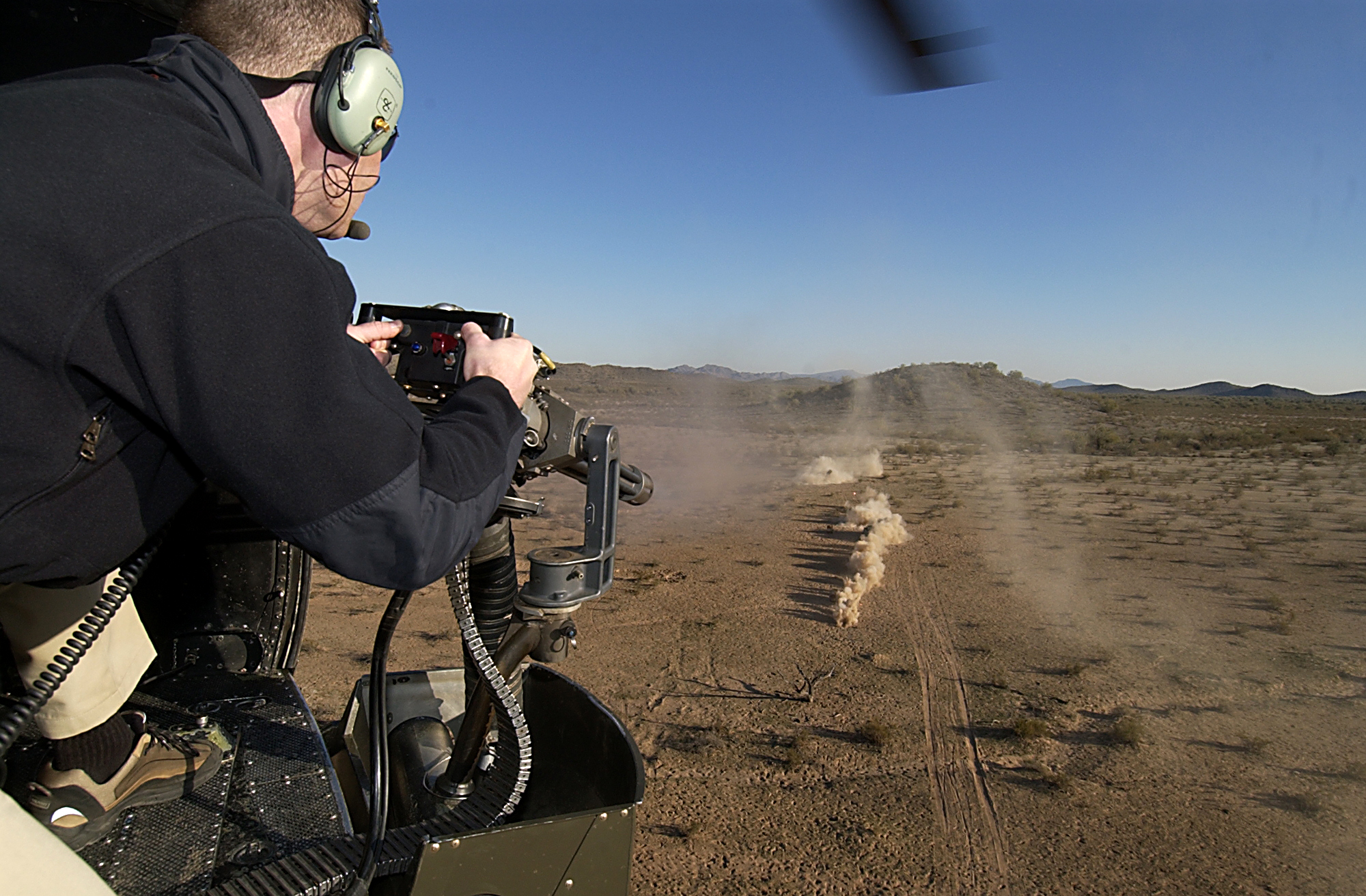 Crane: Wow. I would imagine 3,000 [rpm] is fast enough that it gets the job done where it gives you twice the time that 6,000 rounds a minute would do, basically, correct?

Crane: Yes, I have seen that show before.

DA: Yeah, Jesse James flew out here and spent a day out at our range shootin’ the car. I have a little clip I can send you of that.

Crane: Oh, that would be great.

Crane: The only reason I’m asking about Predator is because everybody can sorta’ relate to that movie, and, uh, ya’ know, it’s just sort of a nice little anecdotal thing, like, ya’ know, "by the way, in Predator, this was"…because that’s where everybody really first saw…

Editor’s Note: The M134 in Predator (1987) was employed by Jesse "The Body" Ventura’s character, Blain. Blain used the weapon to devastating effect against enemy guerrillas, and nicknamed it "Old Painless", since it neutralized (i.e. killed) them so quickly–supposedly before his targets were able to feel any pain from the bullet strikes.

Crane: Were they actually using it in ’93? 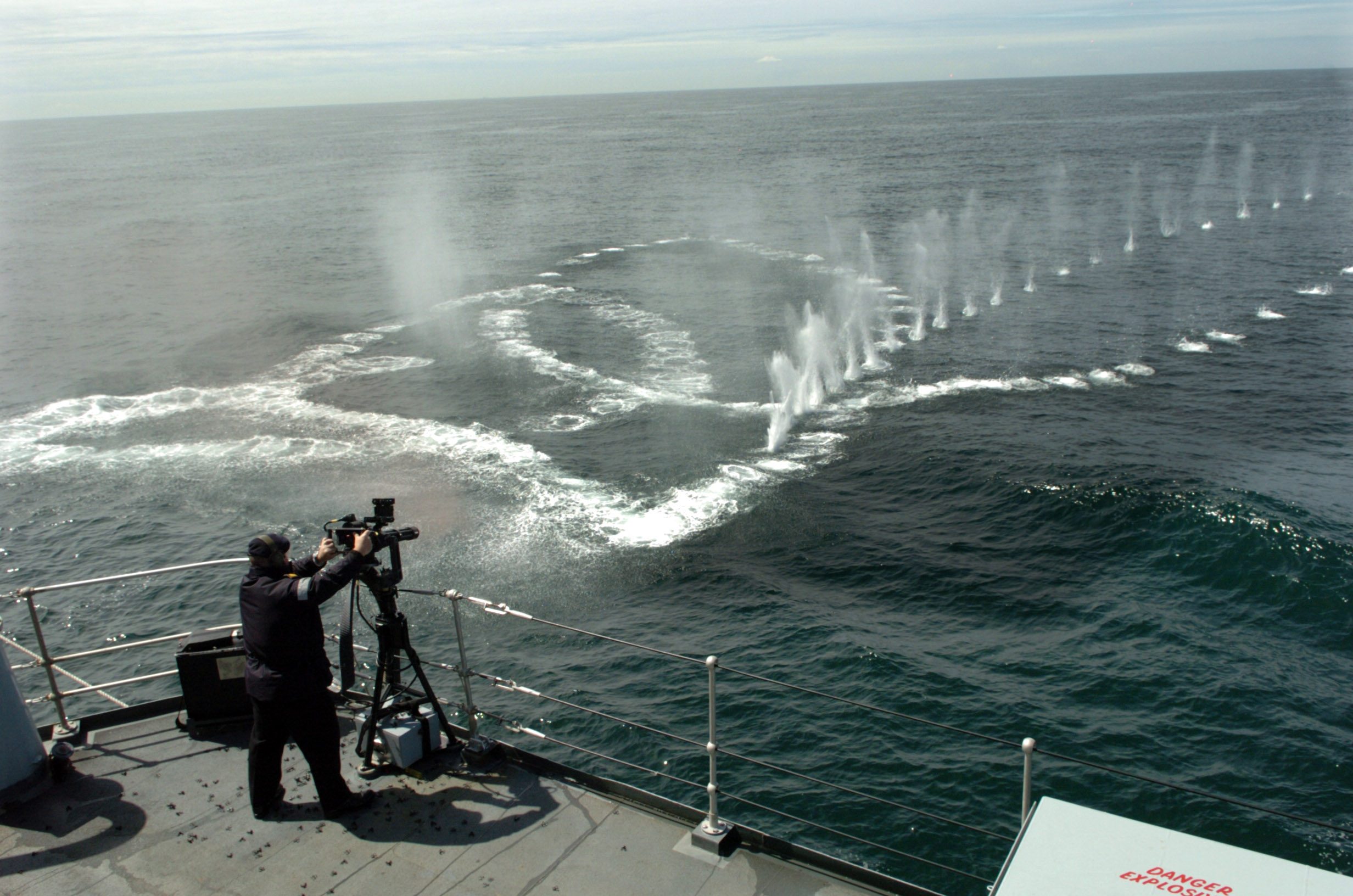 Crane: Did you guys have control of that? I mean, was that your gun at the time?

DA: No, there were no improvements in place at that time. They were using the old, unreliable gun.

Crane: But, in the movie, were they using yours?

DA: Yes. [Correcting himself] Actually, that was probably a half-way [half-way improved/upgraded model], because that was when we were in the early development of it.

DA: Yeah, exactly. [Those Miniguns had] probably half of the upgrades.

Crane: How’d you guys get ahold of this thing [M134 Minigun]?

DA: Um, I think [extracted] inherited one through a will, and we got paid…a guy in England paid us to shoot up a Corvette, and we just had tons of problems when we were filming that for him. [Extracted] came back from that event determined to make the gun work better, and once he started comin’ up with his improvements, he showed it to a guy in the [U.S.] Army that he knew, and the guy’s like, "well, are ya’ gonna’ sell these to us? Or…?"

Crane: Right, and then a light bulb went off.

DA: Yeah, once he saw there was interest, he started building molds–everything took off.

Crane: It’s a neat piece of equipment. And what’s interesting about it is it’s motorized. It’s really very different from other types of gun design, because with most gun design [gas-operated, recoil-operated, etc.], you’re obviously relying on the reciprocating action to operate the gun. With this [M134D], it’s really…it’s like an engine, right? It’s very different in that sense.

DA: Right. One of the other things we’re doing is we’re…we have a full DC system now that…the whole system’s battery-operated independent of the electronic system on the aircraft. So, if you crash, like Black Hawk Down, you’re gun’s still available to you, if you need it.

Crane: O.k. Can you remove the gun from the aircraft altogether and still operate it?

DA: Um, no, it’d just be two people. You’d probably have to have two or three people to move the whole system.

DA: But, there are people that want to do that.

Crane: [Laughing in recognition of who (i.e. what type of group) DA is probably talking about] Right. Sorry, that’s naturally how I think. Ya’ know, ’cause if you can make it operable independent of the aircraft, why not make it so you can literally remove it from the aircraft and still use it? It’s just the logical progression. Aw’right, umm, well that’s pretty much it, right?

Crane: O.k. Well, it’s good talkin with ya’, and hopefully, I’ll be able to touch base with [extracted] tomorrow. Yeah, you guys got an interesting system out there.

If you’d like to get more information on the AGSS II helicopter gunner training simulator, you can contact Binghamton Simulator Co. (BSC) by phone at 607-722-6177, or by fax at 607-722-6504. Greg Stanton is BSC’s Marketing Manager. He can be contacted by phone directly at ext. 305, or via email at [email protected].

Click here to watch Top Gear’s Jeremy Clarkson destroy a speeding Corvette with a M134 Minigun/Gatling Gun while flying a Hughes MD500E helicopter. This is the video shoot that inspired the development of the current product-improved/upgraded M134D models, the same video shoot that is referenced in our interview with Dillon Aero R&D, above.

Click here to see a M134D being fired in bursts.

David Crane started publishing online in 2001. Since that time, governments, military organizations, Special Operators (i.e. professional trigger pullers), agencies, and civilian tactical shooters the world over have come to depend on Defense Review as the authoritative source of news and information on "the latest and greatest" in the field of military defense and tactical technology and hardware, including tactical firearms, ammunition, equipment, gear, and training.
Previous Hi-Point C9 9mm Pistol: Viable Option for Defensive Use?
Next Trophy vs. Quick Kill: Which is the better defense against anti-tank munitions?