As a door gunner in a MH-60K Black Hawk (U.S. Army) or MH-60R Sea Hawk (U.S. Navy) helo, your crew is assigned a mission to locate and destroy escaping insurgent vehicles following an attack on a troop convoy. You look around the cockpit to make sure everything is secure before liftoff. Shortly, with the wind in your face and flying at 140 knots at tree top level, your pilot identifies and calls out an enemy target on the road ahead. You locate the target and begin firing your .50 cal at the escaping vehicle. Following your tracers and impact points, you move your line of fire onto the target. The truck carrying insurgents is destroyed. The pilot immediately calls out another target and you prepare to acquire it……Stop.

Where are you? Are you in the Iraqi battlespace/field of operations? No, you’re not. But it looks, and sounds, and feels like you are because you’re inside an… 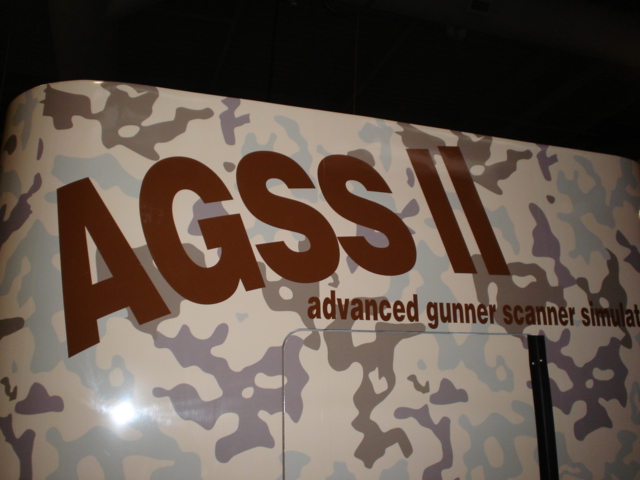 immersive and highly-realistic virtual environment training mission in the Binghamton Simulator Co. Advanced Gunner Scanner Simulator II (a.k.a. Aerial Gunner Scanner Simulator II, or AGSS II), a helicopter gunner simulator designed to mimic an actual helo gunner op as closely as possible. A future version will even incorporate fans to create the changing wind patterns that will hit a gunner on a real world op.

Now, some background: In the mid 1990’s Binghamton Simulator Co. (BSC) developed the Aerial Gunner Scanner Simulator for the Air Force’s 58th Special Ops group at Kirtland AFB. The original “AGSS” was delivered in 1997 to the 58th SOF to meet their requirements for training side door gunners and scanners on MH-53J and MH-60G airframes and to this day it continues to be the only virtual gunner trainer in service. According to Terry Lewis, President of BSC, "with America’s warfighting tactics evolving into increased use of rotary wing aircraft, the need for this type of training is growing daily."
The current Field Manual for Army Door Gunner training suggests commanders “build a helicopter cabin mock-up for training their door gunners….” These simulators range in complexity from simple 20 foot towers to those mounted on a 2 ½ ton truck, simulating aircraft movement during engagements. No standard design exists; "units may develop their own design for enhancing door gunnery training." 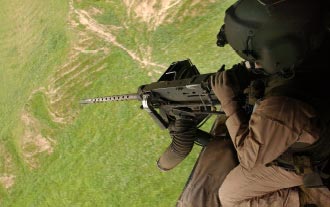 "The new AGSS II provides the look, feel, motion, tactics, targets and realism that are warranted to provide the proper training for these most important assets to the aircrew team", Lewis said. Basically, the AGSS II provides a way to train aircrew gunners as they will fight without having to use valuable aircraft flying hours, pilots, ammunition or fuel until the final segment of training.
In 2001, BSC began a Research and Development Program to evolve the 90’s technology used on the original AGSS to the technology available today. "Our goal was to provide a cost effective solution for training Door Gunners, Hoist Operation, Vertical Replenishment, CSAR and Aircrew Communication skills in the aircrew environment using a similar approach to that used on the AGSS", said Lewis. The BSC development program is proceeding towards providing a family of aircrew training devices tailored to meet individual customer requirements. Specific training requirements can be built from modular technology blocks to provide a unique training device for specific training needs."
I personally had the good fortune to get to try out the AGSS II helicopter gunner simulator at International SOF Week 2005/APBI (a.k.a. the SOCOM show) back in June, and I was just blown away by it. It was amazing. I went into the simulator and sat down in the seat (right gunner, in this scenario), and they immediately fitted me with the VR (virtual reality)/2-way comm headset. The headset has to be adjusted to the individual, so the view out of each eye is correct with regard to muzzle direction/point of aim for the machine gun. This adjustment is performed by turning knobs on the headset, and it’s a fairly quick procedure–although I wasn’t sure I was adjusting it correctly, even with the BSC representative’s help. This was the only really tricky part. Once you have the headset on, you’re in a totally realistic virtual environment. Not only can you look outside the aircraft, but you can also scan 360 degrees and see the inside of the cabin. Anyway, once the headset was taken care of, they showed me quickly how to handle/operate the simulator machine gun– an FN M240 GPMG (7.62x51mm)–with my right hand while keeping my left hand on the edge of the window hole, so I could fire one-handed while lean forward and out like an actual gunner would. When I did lean out the window, as the aircraft lifted off, I was hit by a gust of wind, just like a real gunner would be. This simulated wind increases and decreases according to the airspeed. 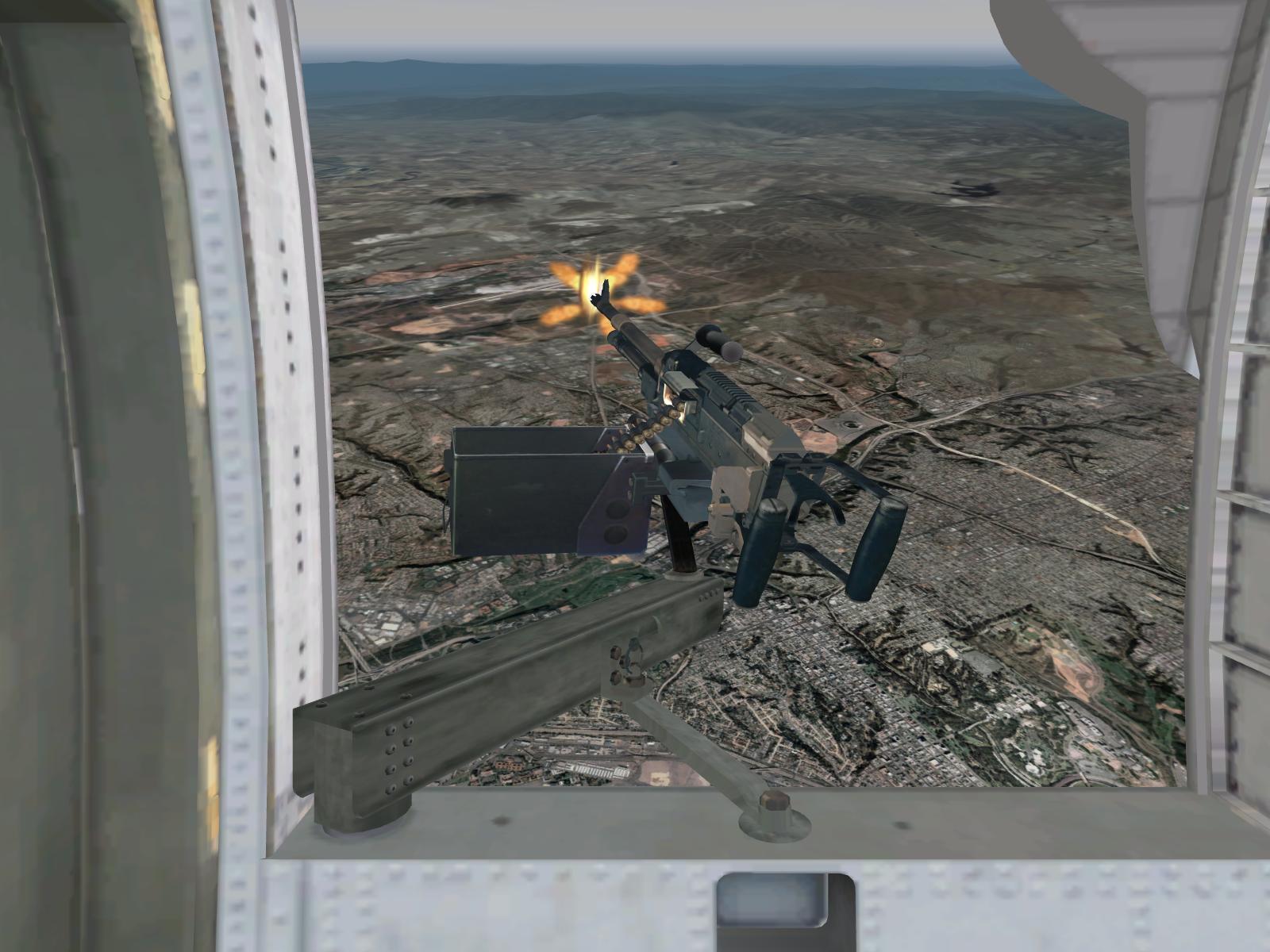 So, we lifted off the ship in a U.S. Navy MH-60R Sea Hawk helicopter and headed for the shore. As we approached the beach, the instructor/pilot called out the first target, which was zodiac-type boat parked on the beach. As I engaged the target, the simulator machine gun mimicked the recoil forces of the real thing. Actually, the simulator gun a control loading system which not only mimics the recoil effects, but also simulates the airflow pressure on the gun as the helo flies through the air. By the way, with the BSC AGSS II helo gunner simulator, one of the objectives is to improve pilot/crew coordination, so the scenarios teach the student gunner to listen and communicate with the pilot, who’s constantly telling you what targets are comming up. The second target called out was a truck moving away from the helo on a road, which is a challenge to hit because it’s moving away from you and the effects on the gun from the rotor wash and banking maneuver are amplified. You really have to lead that target to hit it. The helicopter then banked left towards a populated warehouse area, where another target was called out–a truck at the base of a water tower. The fourth target was a SAM (surface-to-air missile) site. The helo slowed down here, and the pilot called out an enemy troop carrier and an enemy combatant on the ground with an RPG (rocket-propelled grenade). Then, very quickly another enemy combatant aiming a shoulder-fired missile presented itself. This is about the time where the helo starts taking ground fire and you hear bullets hitting the aircraft’s fuselage. Now, we’re banking to the left head back out towards the water–but we’re not done yet. The pilot now calls out a final target, which is a truck on the beach–and we’re back over the water heading for home (the ship). This was the short demonstration. As we flew back to the ship, I was feeling pretty good about things because I only missed two targets on my first time out. However, I later found out that they ran me at only 60 knots. In real life, the gunner would have to hit these targets at an airspeed ranging from 120-160 knots. Huh. But, Greg Stanton, BSC’s marketing manager, said that I still did very well for my first time. He was probably just trying to make me feel better, but I’ll take what I can get–so chose to believe him. 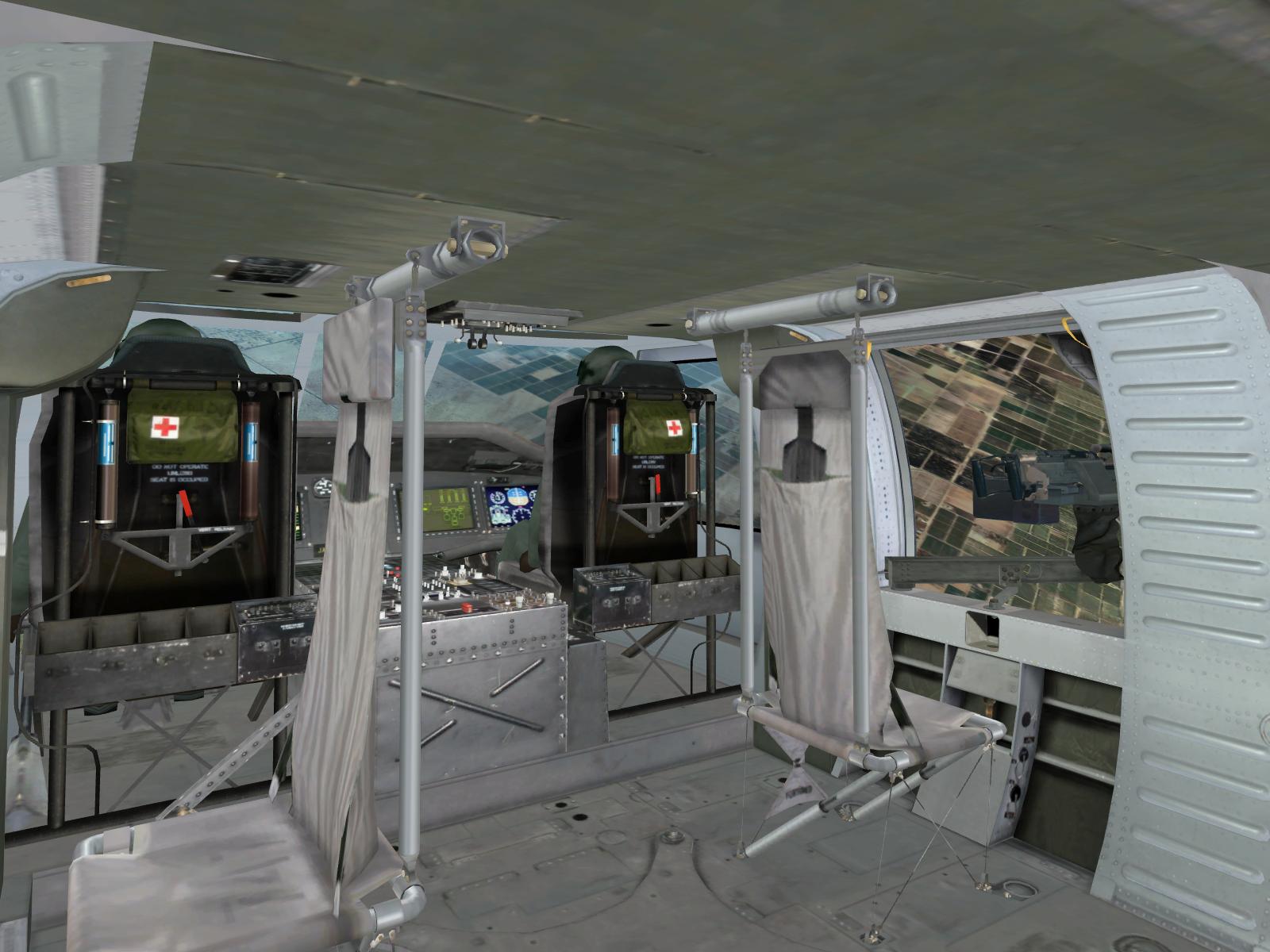 Author’s Note: The digital photos accompanying this article do not do the AGSS II justice. You have to experience the simulator to really understand and appreciate just how great a piece of technology the AGSS II is. It’s amazing, and in the author’s opinion, should be employed/deployed everywhere U.S. helicopter gunners are trained around the world.
Epilogue: Barry Wolfe, another BSC representative, told me on the phone, subsequently, that BSC is continually improving scenarios and they’re currently looking into simulating hoist operations and underway repleneshments (Navy terminology)/sling loads (Army terminology). They can simulate right gunner, left gunner, and rear gunner. He told me that BSC can change the airframe from a MH-60 to a CH-53 or CH-47. All aircraft simulations are ready to go. They also have different machine guns, including a FN M240 7.62mm GPMG variant , M60 7.62mm Machine Gun variant(7.62x51mm), Dillon Aero M134D MiniGun (7.62x51mm gatling gun), and the FN M3M/GAU-21 .50 BMG/12.7x99mm heavy machine gun, so far. The M134D MiniGun has a rather impressive cyclic rate/rate-of-fire (ROF) of 3,000-4,000 rpm/spm (rounds per minute/shots per minute). Civilians should remember the precursor to this weapon from the movies Predator (1987) and Terminator 3: Rise of the Machines (1991), both starring Arnold Schwarzenegger. The Dillon Aero M134D Minigun is the new and improved version.
In 2003, the US Navy awarded BSC an SBIR Phase I Program to apply this type of technology to provide Crew Chief training skills. This SBIR program has evolved into the Prototype Aircrew Virtual Environment Trainer (PAVET) Phase II Program awarded recently to BSC. Under this program, BSC will develop a training device providing virtual training in the areas of communication and gunner skills as well as hoist operations and vertical replenishment skills as funding allows. The prototype device is scheduled for delivery to the MFS at NAS Pax River in mid 2006. 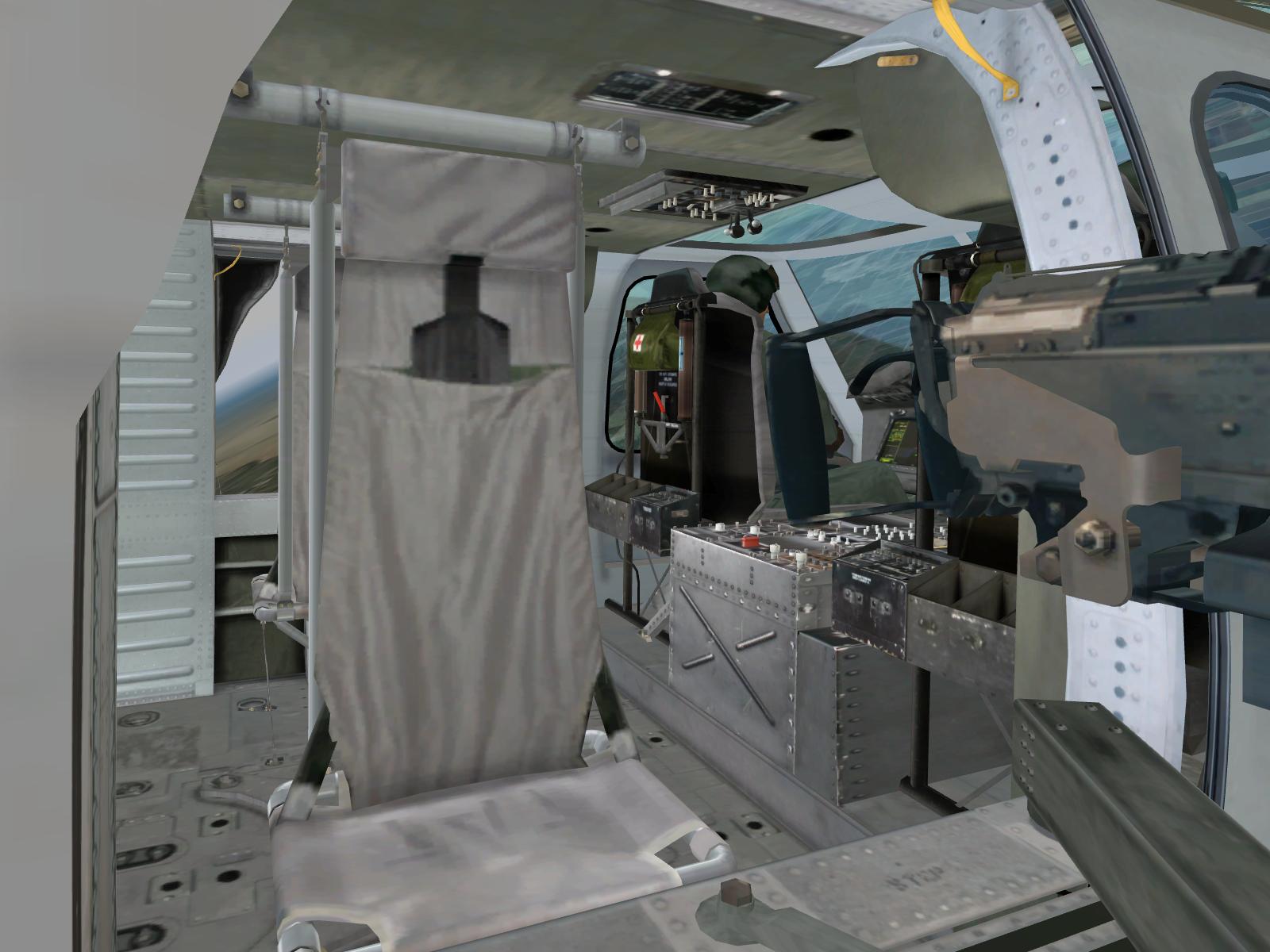 BSC has also responded to requirements for Air Crew Training Devices in various configurations to the US Air Force, US Navy, US Army, US Coast Guard and Homeland Defense, US National Guard, Australian Army, Australian Navy, Canadian Air Force and several European military groups.
Acronyms
AGSS II- Advanced Gunner Scanner Simulator II
PAVET- Prototype Aircrew Virtual Environment Trainer
AVET- Aircrew Virtual Environment Trainer
VHAT- Virtual Helicopter Aircrew Trainer
Click here to view a flash animation promo for the BSC AGSS II gunner simulator.
You can check out the AGSS II Data Sheet and Introduction Sheet by clicking on this link.
If you’d like to get more information on the Advanced Gunner Scanner Simulator II a.k.a. Aerial Gunner Scanner Simulator II (AGSS II) helicopter gunner simulator, you can contact Binghamton Simulator Co. (BSC) by phone at 607-722-6177, or by fax at 607-722-6504. Greg Stanton is BSC’s Marketing Manager. He can be contacted by phone directly at ext. 305, or via email at [email protected].

Addendum (1/01/07): The system has since been renamed the "Advanced Generation Simulator System II".

David Crane started publishing online in 2001. Since that time, governments, military organizations, Special Operators (i.e. professional trigger pullers), agencies, and civilian tactical shooters the world over have come to depend on Defense Review as the authoritative source of news and information on "the latest and greatest" in the field of military defense and tactical technology and hardware, including tactical firearms, ammunition, equipment, gear, and training.
Previous KRISS of Death: Unconventional and Deadly .45 ACP Subgun Makes It’s Debut
Next Burning Bullets: Bunker-Busting Shells to Wreak Havoc on the Enemy