What
do you get when you cross a gas pump nozzle with a Thompson
submachine gun? No, it’s not a joke. It’s a new and rather
unconventional .45-caliber (.45 ACP) subgun that
attenuates/mitigates felt recoil and muzzle rise/climb–thus increasing
controllability–on full-auto by putting the bore axis at or slightly
below the centerline of the shooter’s fist and forearm and combining
that ergonomic aspect with a mechanical recoil attenuation/mitigation
system. It’s called the KRISS Super V Sub-machine gun, and it’s brought
to you by the good folks at Transformational Defense Industries (TDI), headquartered in Washington, D.C. That’s more
than a little ironic. Think about it–a select-fire (full-auto capable)
small arm being developed in D.C., one of the most
anti-legal-firearms-ownership/anti-Second Amendment cities in the
country. Most likely, TDI’s manufacturing facility is located outside
the District (in an actual state, somewhere), and it would seem logical
that their testing facility would be located somewhere in Virginia.
We’ll look into it.

TDI claims that in addition to reducing felt recoil and muzzle rise on full-auto, the KRISS’s unique design… 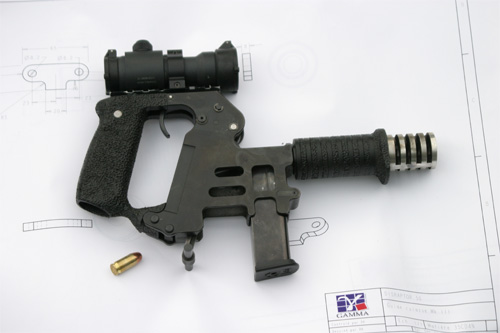 reduces weapon weight by as much as 50%. The total number of parts
(including moving parts) is supposed to also be lower, but DefRev
doesn’t have a parts count, yet. According to the company, the KRISS
Super V subgun can be adapted to other calibers. We assume this means
that 9mm (9x19mm) and .40 S&W versions are possible. The TDI
website states that the KRISS prototype has already been "extensively
analyzed and tested by the US Army Picatinny Arsenal" (NJ), and that
the the KRISS weapons platform "has proven itself to be a major step
forward that can equip the war fighters of today with the ability to
deliver a large quantity of high impact rounds with the accuracy that
can only come from a low-recoil, light-weight weapon."

DefenseReview
will try to acquire the results of those tests, ASAP. In the meantime,
we highly recommend that our readers take a look at the KRISS Super V
Sub-machine gun video clip (link below). From viewing the video clip,
it’s DefRev’s opinion that TDI needs to do a just a few things with
regard to further developing the KRISS:

1) Develop a 30-round magazine, or make the KRISS compatible with Thompson 30-round box mags.

2)
Redesign and elongate the magwell so it can be used as a vertical
foregrip, or design an actual vertical foregrip (fixed or folding) for
the weapon. If a folding vertical foregrip is designed, it must be
sturdy/robust. If a separate vertical foregrip is added, the barrel
will most likely have to be lengthened slightly. Without a vertical
foregrip, the firing method employed by the test shooters in the TDI
video clip looks just a wee-bit dangerous for the shooter, as the
support hand must be placed awfully close to the muzzle during
full-auto fire. It just doesn’t look safe to us. A robust vertical
foregrip would provide for a much more secure (and thus safer) hold. It
would also allow the KRISS to be used as a less-lethal blunt impact
weapon for CQB/CQC (Close Quarters Battel/Close Quarters Combat), where
lethal force isn’t necessarily required.

We
have to be honest–DefenseReview can’t wait to get our hands on this
rather handy-looking package as soon as we possibly can. Unless the
company’s video clip is deceiving, it just has to be fun to shoot. It’s just too weird-looking not to be.

Right-Click here
to download and watch TDI’s video clip of the KRISS Super V Sub-machine
gun prototype (.45 ACP) being fired on full-auto at the range. Once you
right-click on the link, just click on "Save Target As" to download it
to (and save it on) your computer.
Click here to view Armed Forces Journal’s (AFJ) slow-motion video clip
of the KRISS prototype .45 ACP being fired on full-auto. Again, keep
your eyes on the muzzle as the weapon is fired one-handed on full-auto.
The weapon remains controllable, although it looks like there’s a bit
of torque.
Click here to read what Armed Forces Journal (AFJ) had to say about the KRISS prototype .45 ACP, after they ran it at the 2005 Shoot-out at Blackwater.
If you’d like to get more info on the KRISS Super V Submachine gun, DefRev suggests that you contact Transformational Defense Industries (TDI)
by phone at 202-719-4572, or by fax at 202-719-3123. Ask for Andrew
Finn. Mr. Finn is TDI’s Senior Vice President. TDI is a wholly-owned
subsidiary of Gamma Research & Technologies, which is headquartered
in Switzerland.
KRISS of Death: Unconventional and Deadly .45 ACP Subgun Makes It’s Debut by David Crane

David Crane started publishing online in 2001. Since that time, governments, military organizations, Special Operators (i.e. professional trigger pullers), agencies, and civilian tactical shooters the world over have come to depend on Defense Review as the authoritative source of news and information on "the latest and greatest" in the field of military defense and tactical technology and hardware, including tactical firearms, ammunition, equipment, gear, and training.
Previous Milkor MGL-140 Six-Shot Multiple Grenade Launcher Demo at Blackwater
Next AGSS II Helo Gunner Simulator: Super-Realism for More Enemy Kills in Battle