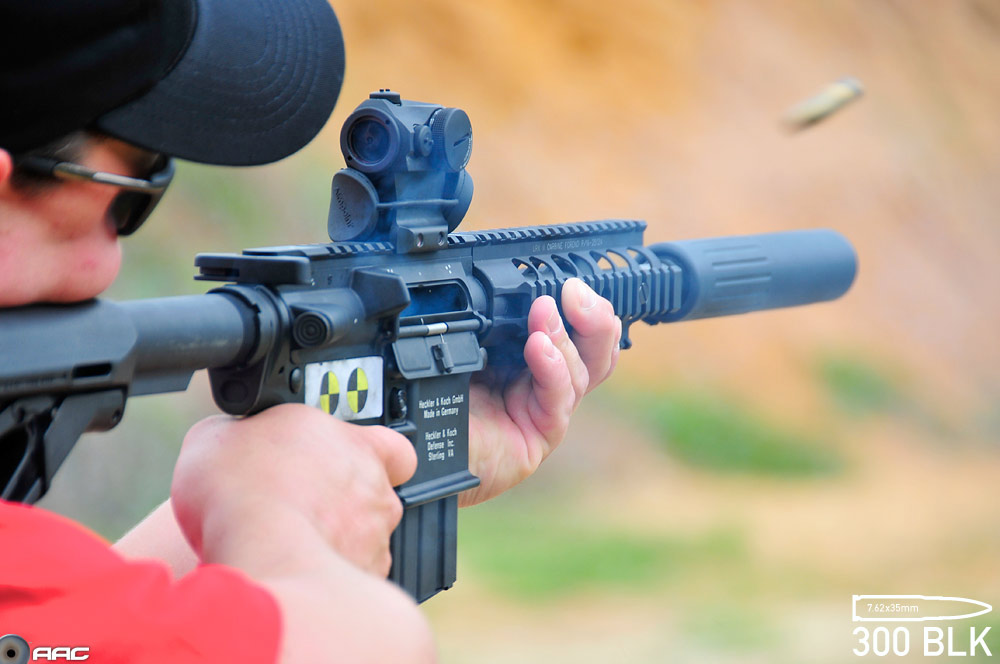 Back on September 29 (2010), Rob Silvers from Advanced Armament Corp. (AAC) sent DefenseReview (DR), The Firearm Blog, Military Times, and pretty much everyone else (and their mother) an email on the new 300 AAC Blackout (.300BLK) 7.62x35mm supersonic/subsonic rifle cartridge. Unfortunately, we didn’t have the time to write and publish this article before we left on our trip to Paris (France). So, we’re publishing it, now.

The 300 AAC Blackout cartridge would appear to be Advanced Armament Corp.’s (AAC) take on the .300 Whisper cartridge, a tactical wildcat cartridge developed by SSK Industries, only with the addition of lighter-weight supersonic bullet variants/options to provide a broader tactical mission profile.

Introduced at Modern Day Marine 2010, the 300 AAC Blackout silent cartridge gives you a choice of a 123gr (123-grain MC 300BLK) Hornady, 155gr (155-grain OTM 300BLK), or 220gr OTM (Open-Tip Match) subsonic bullet, depending on what kind of tactical problem one needs to solve with extreme prejudice.

The delivery device comes in the form of an M4/M4A1-type 9” AR SBR/PDW (Short Barrel Rifle/Personal Defense Weapon) upper receiver, which delivers the 300 AAC Blackout round to the target with energy that, according to AAC, matches the ballistics of the 7.62x39mm Russian round out of an AK (AK-47/AKM) with the 123gr load, and offers 37% more energy to target than the M855 ball 5.56x45mm NATO (5.56mm NATO) round. In his Military Times GearScout piece, “Stickman” implies that the 300 AAC Blackout cartridge’s ballistics are equivalent to a highly-supersonic 62gr M855 5.56x45mm NATO (5.56mm NATO)/.223 Rem. round out of a 16” barrel.

AAC has also developed the AAC 762-SD-N-6 silencer/sound suppressor/”muzzle can” as part of the 300 AAC Blackout loadout package.

While “Stickman” over at Military Times GearScout seems pretty gung-ho on the 300 AAC Blackout cartridge, Defense Review is reserving judgement until we can gauge U.S. military operator feedback on it. We’ll rely on our U.S. Army Special Forces (SF) and other U.S. military Special Operations (SPECOPS) contacts to determine the 300 AAC Blackout’s viability for U.S. military SF and SPECOPS mission profiles compared to the latest heavy 5.56mm NATO “Optimized” rounds, 77gr MK262 Mod1 round, and 7.62mm NATO rounds, which are already in the supply chain. Military ammo supply chain logistics are always a problem for non-NATO cartridges.

The 300 AAC Blackout is a wildcat cartridge, and DR has seen a lot of wildcat cartridges come and go over the years. Even the 6.8 SPC (6.8x43mm SPC) and 6.5 Grendel, two pretty popular wildcat cartridges that have generated a significant level of interest in U.S. military special operations, law enforcement, and civilian tactical shooting circles, have seen relatively small-scale adoption and/or use compared to the 5.56mm NATO/.223 Rem. and 7.62x51mm NATO (7.62mm NATO)/.308 Win. cartridges. The .300 Whisper, by comparison, really went nowhere.

The good news for the .300 BLK cartridge is that it was created by AAC, which means it has the backing of Freedom Group, which is a pretty large and powerful organization. So, we’ll see how it does. Kudos to AAC for introducing a new tactical cartridge to the world and providing some more ballistic variety to the tactical weapons/ammo sandwich. DR always supports that.

Now for some additional info on the 300 AAC Blackout cartridge from the company’s website:

“Introducing the Advanced Armament Corp. 300 AAC BLACKOUT (300BLK). This system was developed to launch 30 caliber projectiles from the AR platform without a reduction in magazine capacity and compatible with the standard bolt.

Due to the high efficiency of the cartridge, less powder is used than 5.56mm, which results in a rifle that is a comfortable to shoot – even with a short barrel.

If you load your own ammo, pay special attention to all of the normal safety practices. Recommended powder for most supersonic loads is Hodgdon H110.

For subsonic, there are special requirements and nearly all published loads are non-optimal for the 300 BLK upper. Many existing loads were developed for Thompson Center® single-shot pistols, or for ARs by people not aware of the magazine limitations. These loads pay no attention to automatic rifle function and should not be used. Look for a load which results in a cyclic rate of 700 rpm or more. AA1680 is recommended because its bulk density matches the case capacity and it will generate enough gas pressure to cycle the weapon.

David Crane started publishing online in 2001. Since that time, governments, military organizations, Special Operators (i.e. professional trigger pullers), agencies, and civilian tactical shooters the world over have come to depend on Defense Review as the authoritative source of news and information on "the latest and greatest" in the field of military defense and tactical technology and hardware, including tactical firearms, ammunition, equipment, gear, and training.
Previous CNBC Investigative Report “Remington Under Fire” Upshot: The Remington X-Mark Pro (TM) Trigger System may be an advisable option for the Remington 700 rifle.
Next Silver Shadow Gilboa APR (Assault Pistol Rifle) Select-Fire Tactical AR (AR-15) PDW/SBR/Pistol for Military Special Operations (SPECOPS) Applications