When I first started taking tactical carbine courses, a retired Navy buddy of mine was starting to train with what was, at the time, the “new hotness”, a single-point sling. So, I decided to try one out, myself. Previously, I had only used the typical two-point slings like those old non-quick adjustable USGI M16 nylon slings, and I only really used those to carry my rifles around with the exception of occasionally using them as a stabilizer by wrapping the sling around my arm as taught to me a long time ago by a friend’s father, who was a Marine. 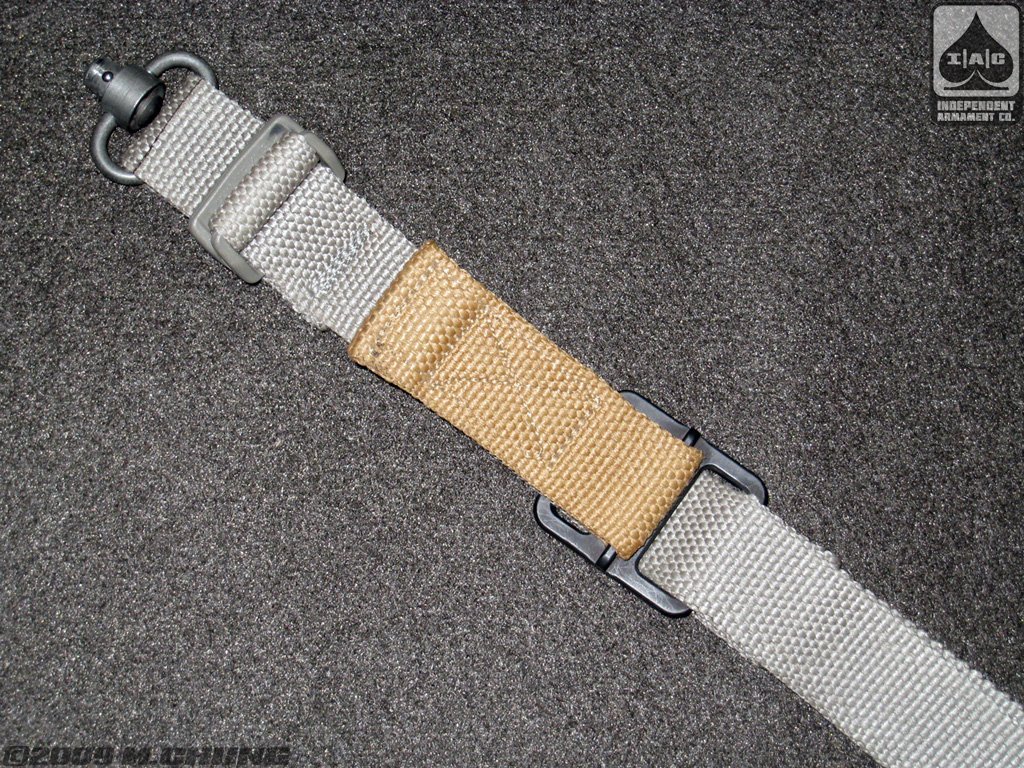 Anyway, I ran a single-point sling for a few years, and it worked out well, for the most part. I like the freedom of the single-point with the ability to quickly transition to my support side to shoot around barriers. The part that didn’t work out so well was when I took one of ITTS’s (International Tactical Training Seminars, Inc.) excellent carbine courses, which incorporated an obstacle course at the end of the third day.

One of the tasks was to climb up a ladder and shoot from a slightly elevated position on top of a shipping container. This required the use of two hands to climb up and down the ladder. What I found was the single-point sling didn’t allow me to move the rifle out of the way securely enough to not hinder my climb. It’s not a lot of fun trying to quickly climb down a ladder while your carbine is getting caught up in the ladder at the same time…and with a ton of gear on as it is, it just adds to the fun. 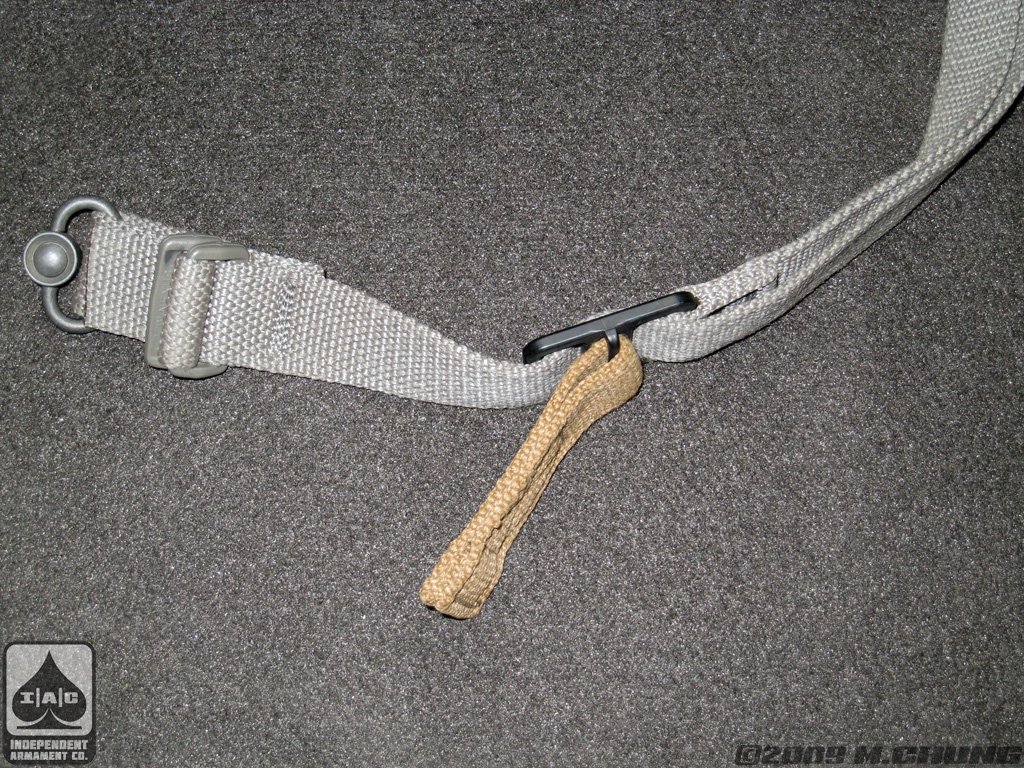 In another incident, during a private tactical carbine course, one of the tasks was a simulation where we had to extract an injured buddy (using a dummy) out of a disabled vehicle. I had moved the carbine off to the side, as per usual, grabbed the dummy, and started to drag it out. As I was doing this, my carbine decided it too wanted to help and swung around and struck the dummy square in the noggin. Once again, it had gotten in the way due the “free” nature of a single-point setup. Now imagine if this was a real incident and the barrel was searing hot from firing? I’m sure the extra burns on my buddy wouldn’t be of any help to him, and especially so if he’s covering me with a handgun while I’m trying to get him to safety.

Shooting on the move using my secondary weapon was also an issue I ran into. The single-point sling would allow my carbine to constantly bang into my legs and sometimes impact a more important part of my anatomy–but we don’t need to get into that! One last issue worth mentioning was that the single-points would allow the rifle to sometimes twist into odd positions when I would return to the carbine after engaging targets with my secondary. Again, the “free” nature of the single-point is both a positive and a negative…I found it to be more of a negative, however. 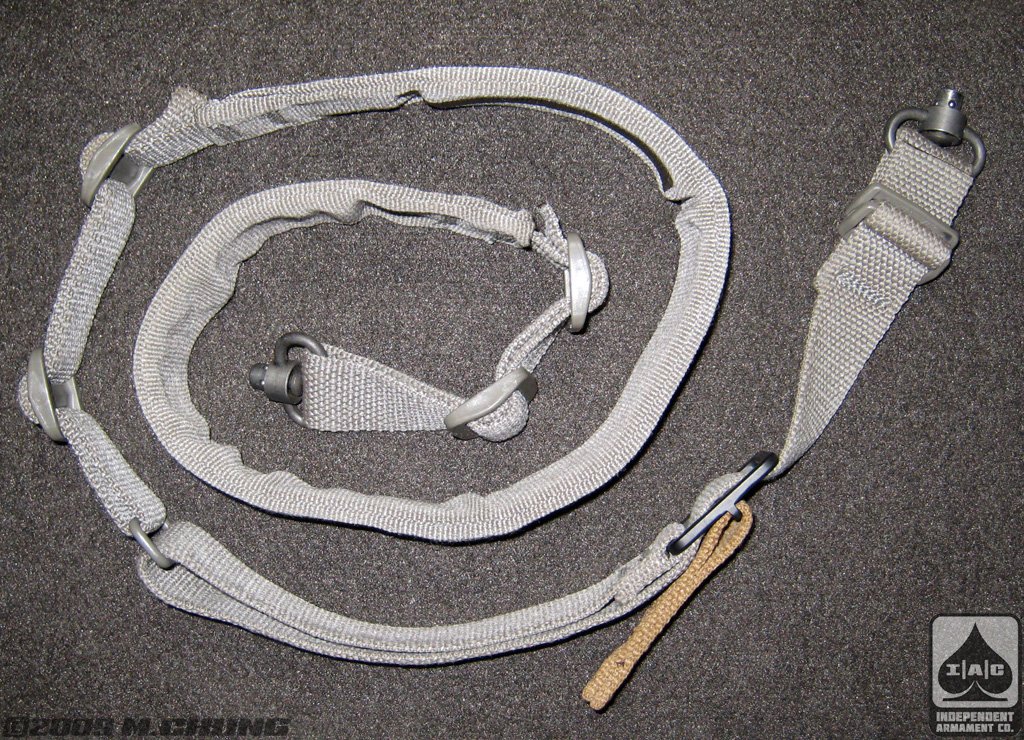 At this point, I decided to revisit two-point slings. I started looking around, and found the Vickers Combat Applications Sling (VCAS, for short) while attending SHOT Show a few years ago. Now, Larry Vickers is a guy who knows what he’s doing. As a retired Delta Force Master Sergeant, he’s been there and done that in more than a few places. With credentials like that, he’s got to a know a “little” something, right? I was immediately impressed by its design. One thing that struck me was the lack of excess strap material hanging all over the place. The sling’s design is very clean and streamlined.

The material is also interesting. It looks like canvas, but I found out that it’s actually nylon webbing (1.25″ wide). The sling’s design includes a “quick” slider (photo 1 / photo 2) that allows you to size-in and size-out the sling with a single pull. This allows you to easily get in and out of the sling quickly. The construction was as I expected from Blue Force Gear, simply top notch. Great choice of materials, and the stitch quality is great. (photo 3) 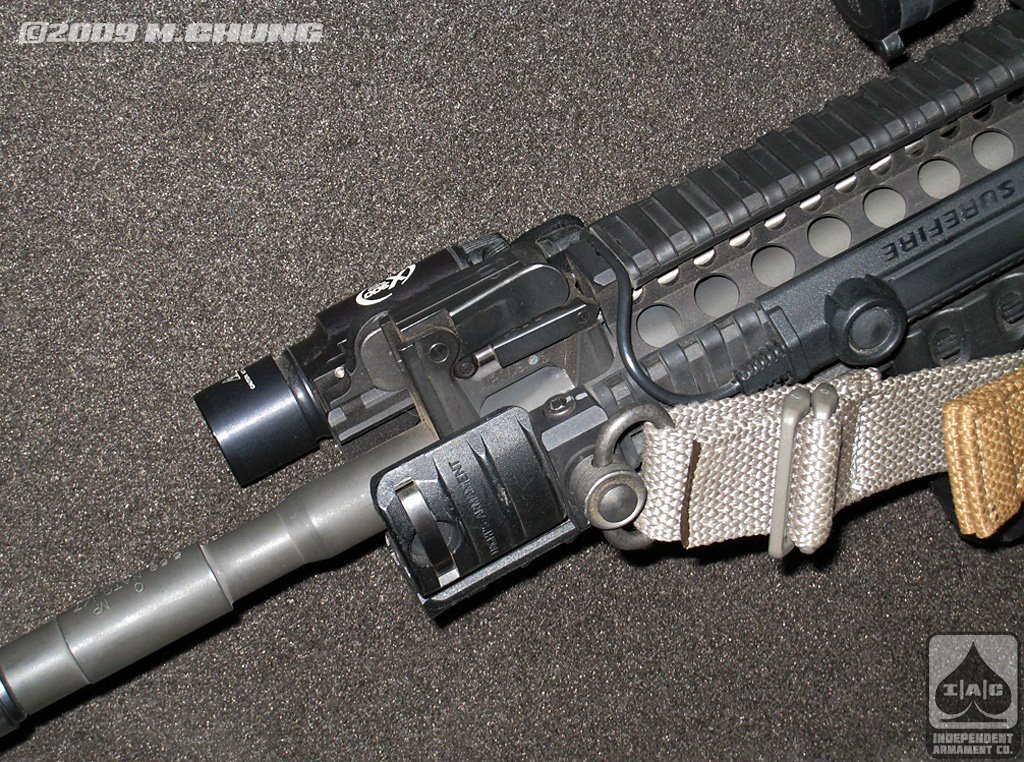 I added a pair of Daniel Defense Heavy Duty Push Button Quick Detach Sling Swivels so that I could attach it to my carbine. I also installed a Daniel Defense Rail Mount QD Swivel Attachment Point up front on my Daniel Defense 9.5 FSP Lite Rail. A nice feature of this attachment point is that it has a built in limiter to prevent the sling swivels from rotating 360 degrees (which cause your slings to get tangled). (photo 4)

Out back, I have two attachment points and pick one based on needs. The first attachment point (and my primary method of use) is on the Vltor EMOD stock (telescoping/collapsible/retractable buttstock). I attach it on the opposite side, as I find that it works better for me. (photo 5) The secondary attachment point is on the Noveske QD End Plate. (photo 6) 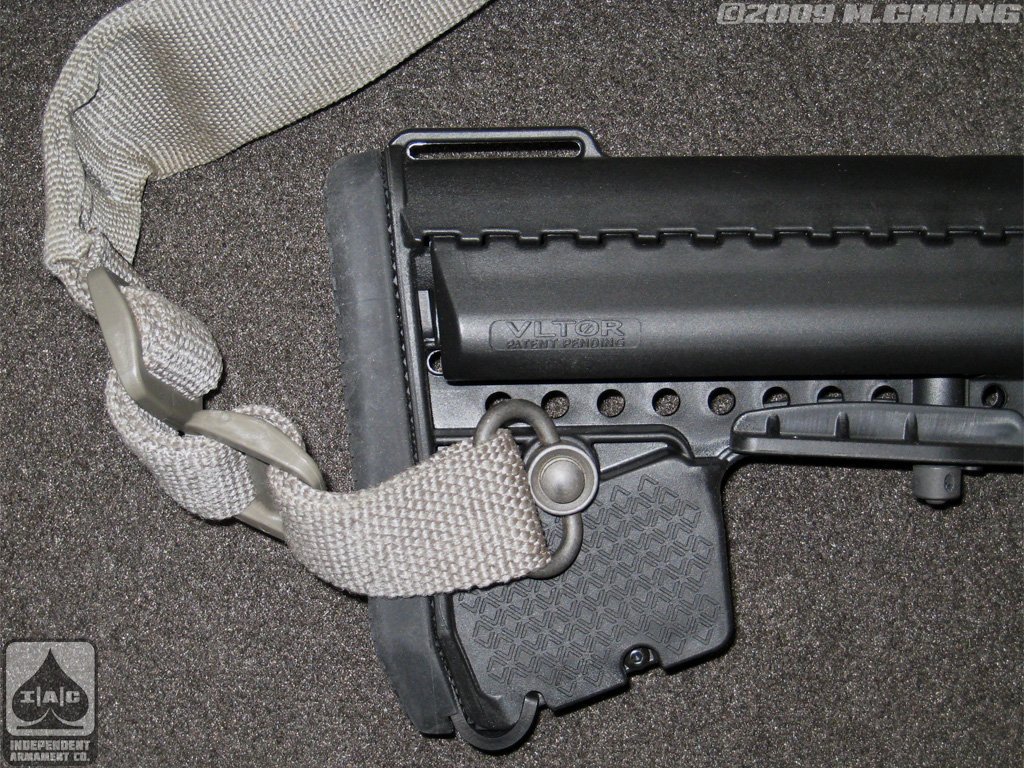 I have taken probably a dozen carbine courses since switching over to the VCAS two-point sling, and it’s held up very well, with no issues of which to speak. I was a bit concerned about doing speedy support-side transitions, but after taking a course with Larry Vickers, I’ve learned how to properly work the sling for these transitions. It’s actually pretty easy. You just adjust-out the slider with your support hand and then take your support arm out of the sling.

At this point, the sling is just around your neck and there is plenty of freedom to transition to your support side. Does it take longer than a single-point sling? Yes it does. However, consider your actual needs. Does the quick support-side transition outweigh the slightly slower transition, while also providing the ability to secure the rifle in other situations? If so, the two-point Vickers Combat Applications Sling may be right for you.

I think that, for me, any scenario where I have to strap on my AR for “real life use” is going to require that I have easier access to both my hands while having the weapon controlled, versus having to do a fast support-side transition. I’m thinking more of a SHTF (Shit-Hitting-The-Fan)/Katrina/Haiti type situation where having a weapon is paramount for your own security. However, I think that, for the majority of the time, you’ll be doing other things, not running and gunning. The VCAS has worked out very well for me, and I have no desire to go back to a single-point. I’m currently running the padded version of the VCAS, as I sometimes run “slick” (battle belt only) and the padded version is more comfortable around the neck. 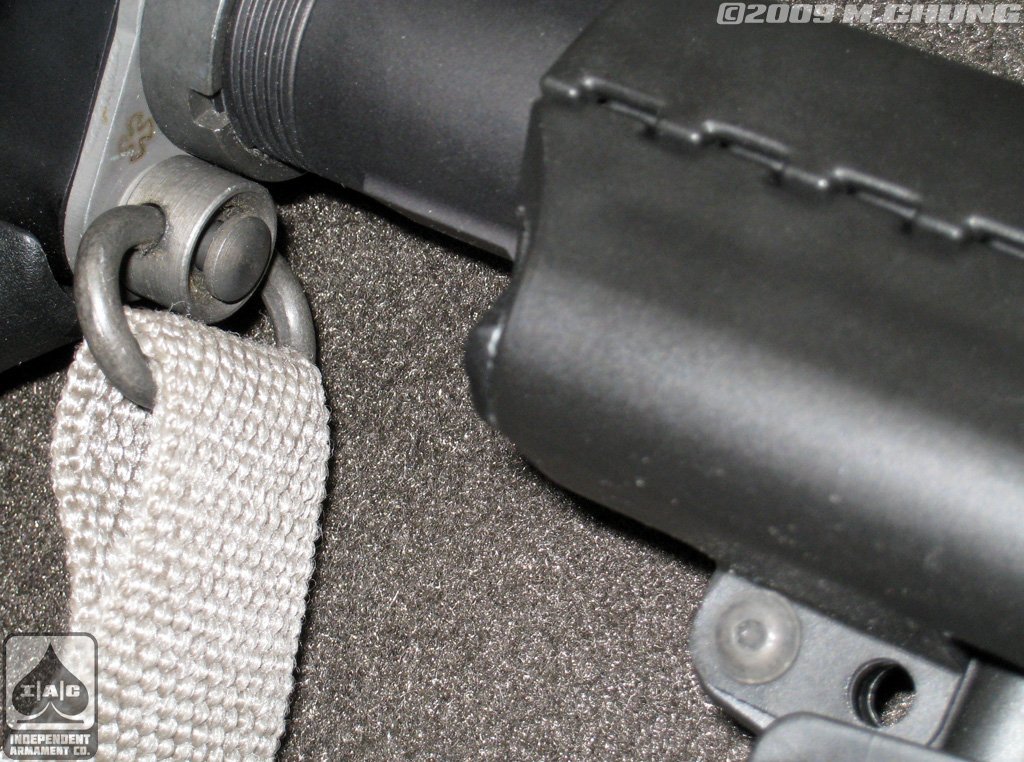 Another recently-introduced item is the “medic” version of the VCAS, which allows you to tighten (or loosen) the sling while the rifle is slung on your back to make your weapon more secure. It accomplishes this via a second adjustment slider. There are also a few other versions, so check their website to determine which features will work for your specific needs.

Vickers Combat Applications Sling (VCAS) by Larry Vickers and Blue Force Gear: This two-point tactical rifle sling may be just the ticket for your tactical training. by David Crane

David Crane started publishing online in 2001. Since that time, governments, military organizations, Special Operators (i.e. professional trigger pullers), agencies, and civilian tactical shooters the world over have come to depend on Defense Review as the authoritative source of news and information on "the latest and greatest" in the field of military defense and tactical technology and hardware, including tactical firearms, ammunition, equipment, gear, and training.
Previous DefenseReview back from SHOT Show 2010. Fresh articles on new tactical technology/hardware on the way…
Next Raptor Beware: Russia Test-Flies PAK FA Sukhoi T-50 5th-Generation Supercruise-Capable Low-Observable/Stealth Fighter Aircraft. Look out F-22.