By Michael Pannone for DefenseReview
ctts at live dot com

All photos/images contained in this article were supplied by the author, Mike Pannone.

Mark LaRue (owner of LaRue Tactical) sent out one of his 16" Stealth Upper Receivers (AR upper receiver) a year ago January while I was working on a carbine course for the DoD (U.S. Department of Defense). I was able to shoot it, but only with M855 (Green-Tip) and therefore was not really able to see what the 1/8 twist polygonal barrel could and would do. With the aforementioned and notoriously inconsistent M855, I was still able to keep 1.5-2 MOA groups with the occasional ammunition related flyer. When I got it home to Tucson, I shot it with a Leupold Mark 4 1.5-5x20mm MR/T M2 Illum. Reticle tactical scope (this optic with the illuminated SPR reticle is my favorite reasonably priced mid range optic), and 75 grain Hornady Match ammunition. With this combination (75gr Hornady, 1.5x5MR/T, 1/8P twist), the 16” Tactical Stealth upper delivers sub MOA accuracy with little trouble. 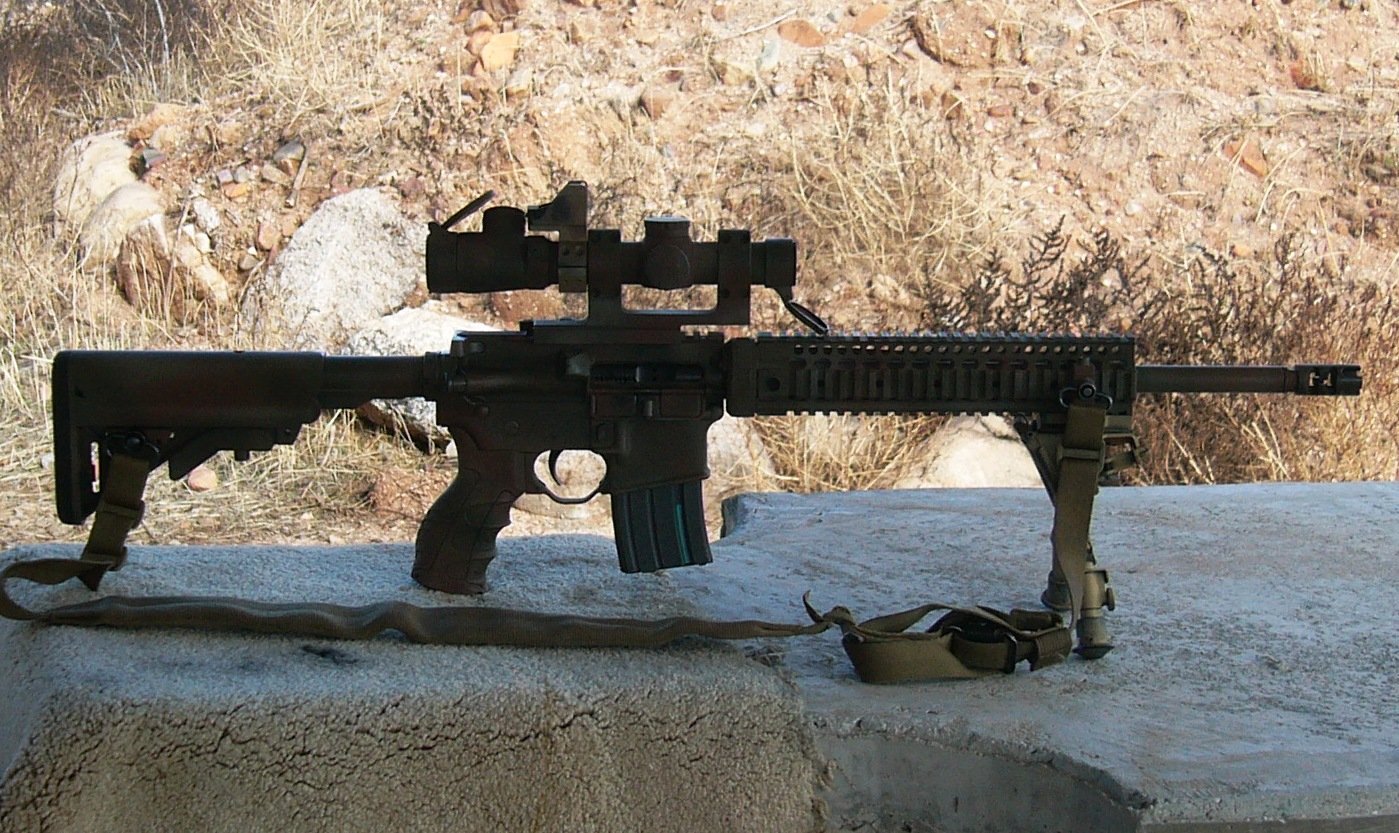 NRA-type rapid fire strings (10 rounds in 1 min) at 200, prone from a bipod rest, that group in the 4” range. I shot some groups recently from a bench using just a bipod to show what the rifle can do without a machine rest. If a shooter can sit behind a rifle and shoot 1.5MOA or less groups without trouble, then one can reasonable assert that the gun is capable of far better than that. My largest groups with a 10-15mph half value wind were 1.5MOA. The group pictured in Target 3, below (bottom target, below), was shot on a calm day with Black Hills 77gr. Mk262 OTM, and measures 9/16” or .563MOA. The barrel twist seems to prefer the 77gr Mk262 above the other loads.

At 200yds the Larue TS [Tactical Stealth] 16" performed just as outstanding. Groups were all less than 1.5MOA, and that again is from a human behind the gun, not a machine rest. The top 200yd photo (Target 1) was a 1.375MOA group with a called flyer. Without the called shooter error, the group would have been .88MOA. That should be a strong indicator of what the Larue Upper is capable of. I would expect a machine rest would cut groups another 30%. You won’t have to worry about out-shooting your Larue Tactical Stealth upper, that’s for sure. 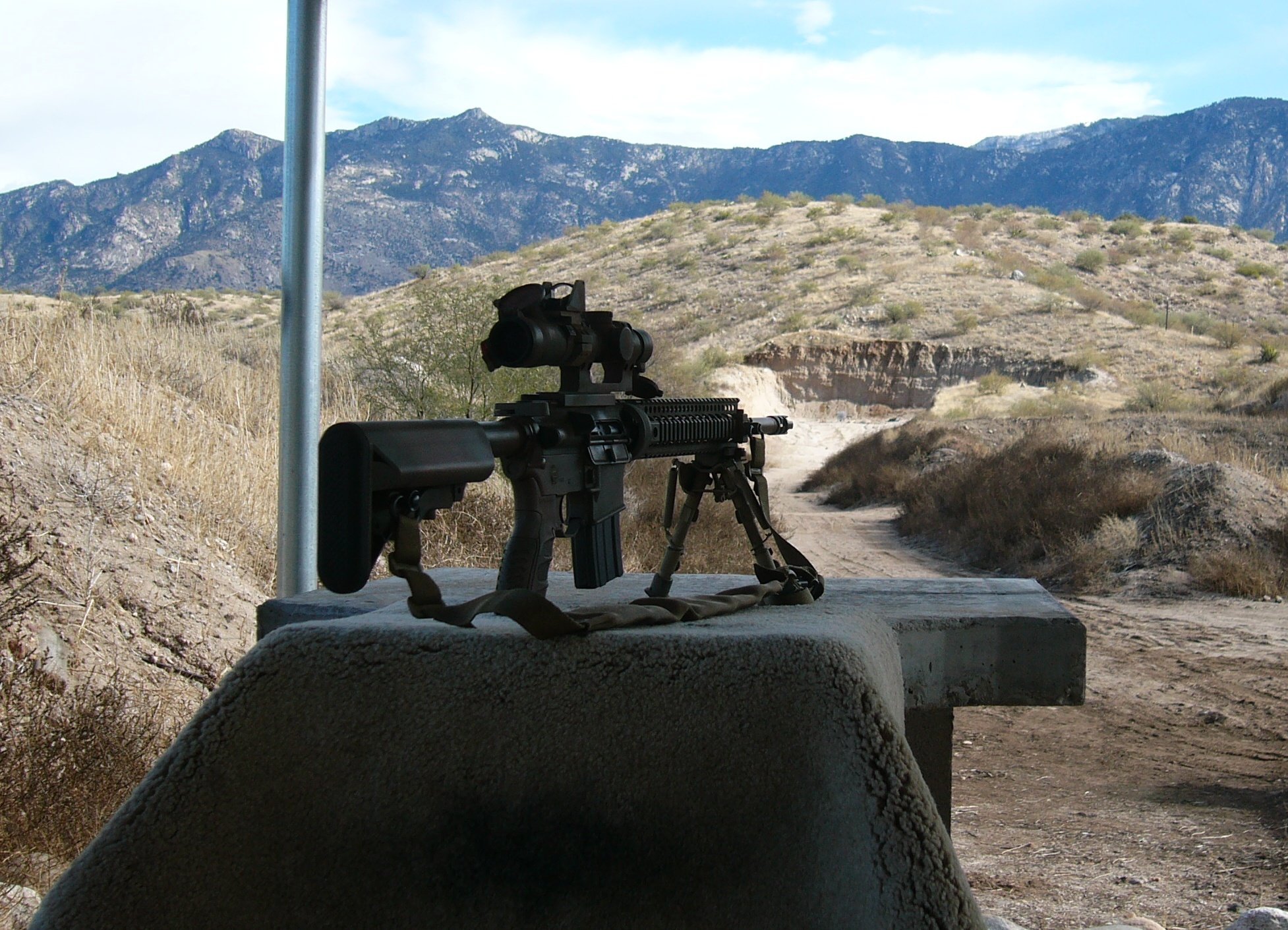 Anyway, I subsequently (finally) got a still day and put some rounds nice and tight. The bottom target (Target 3, pictured below) shows my best 100-yard target. I had 4 other sub MOA groups (from .75 to .95MOA) The rifle (Larue Stealth 16) definitely likes Mk.262 77gr OTM.

The Stealth Upper receiver itself has been supremely reliable and very soft shooting. I attribute that to the mid-length gas system which has a much lower peak pressure at the gas port (the port is about 2 inches further from the chamber than a traditional carbine length gas port location.)

All in all, if you’re looking for a tactical-config tack driver to strap on top of your existing lower, this will easily fit the bill. The Special Purpose Rifle (SPR)/Designated Marksman Rifle (DMR) is the newest addition to many infantry squads, and has proven extremely effective in the hands of trained rifleman in both Iraq and Afghanistan. This is nothing less then what I call an SPR/K, or SPR “Short”. It will perform like its 18” or 20” brothers, but cuts length and weight from front end. You lose a little velocity, but gain in portability, with no discernable accuracy loss at SPR distances (0-500m).

My Larue Stealth Upper has been coated by Nathan Roads of Next Generation Arms (NGA) in a desert camouflage pattern. I used it during an SPR course in West Virginia and it handled the elements and range wear quite well. The interesting part is that the coating is not only exterior, but also interior. Coated parts include the entire BCG (bolt carrier group), chamber, and bore. Here are some of the particulars from Nathan himself:

The parts that get hot such as the barbell, gas block and the gas tube are coated with high temp coating that dissipates heat 40 percent faster than uncoated metal. You can literally take a map gas torch to these parts until you think they are red hot, because you cannot see the color change, and the coating is stable. In fact it gets harder and more slippery with heat (including the interior coatings). The exterior is coated with an extreme environment coating which has been tested with 5% brine spray to 3500 hours, and is heat stable to 500 degrees. It is also rated for high wear. The other coatings are 500 hours of 5% brine spray for the high temp and 150 hours for the interior coating.

I’ve shot nearly 2500 rounds through the upper, and pulling a bore snake takes out all the fouling. I don’t use Sweets, or excessive brushing. The ceramic coating on the inside of the barrel does not hold the powder residue and copper like a traditional stainless steel (SS) barrel. The NGA-Ceramic-coated BCG is my favorite, and I plan on getting all my BCG’s coated if I can. They clean up in 5 minutes, and will run with almost no lubricant due to the lubricity inherent with the coating. I still make sure contact surfaces have some lube on them, but it takes very little.

The LaRue Tactical Stealth 16" Upper is not cheap, but it’s worth every penny. If you value a reliable, straight-shooting gun, give Mark a call. He’s got the medicine you need. 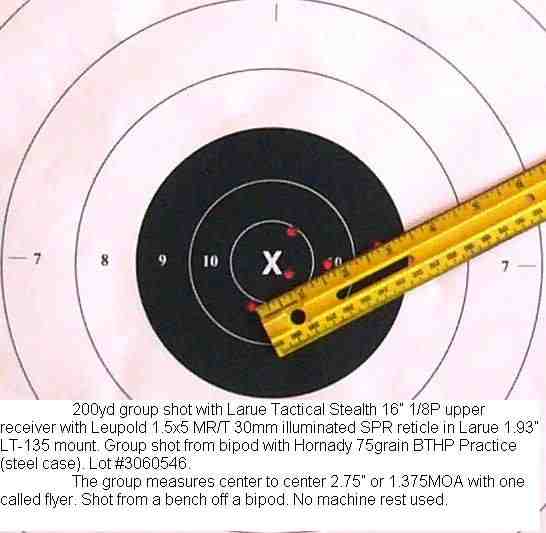 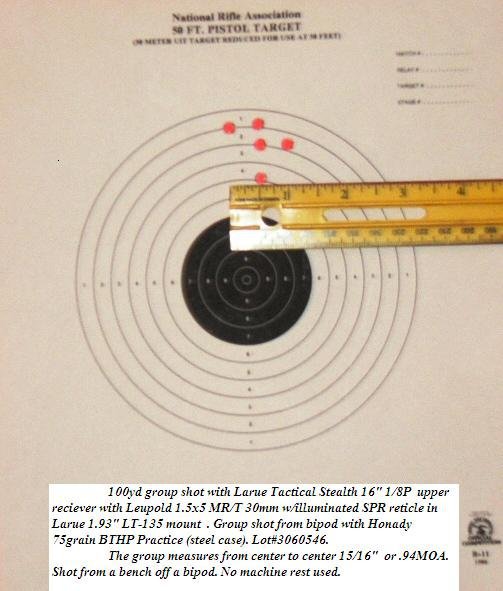 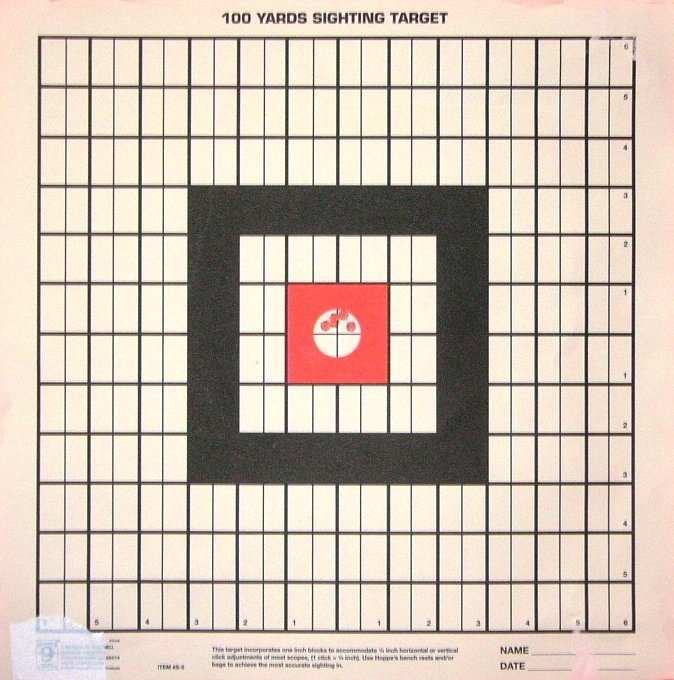 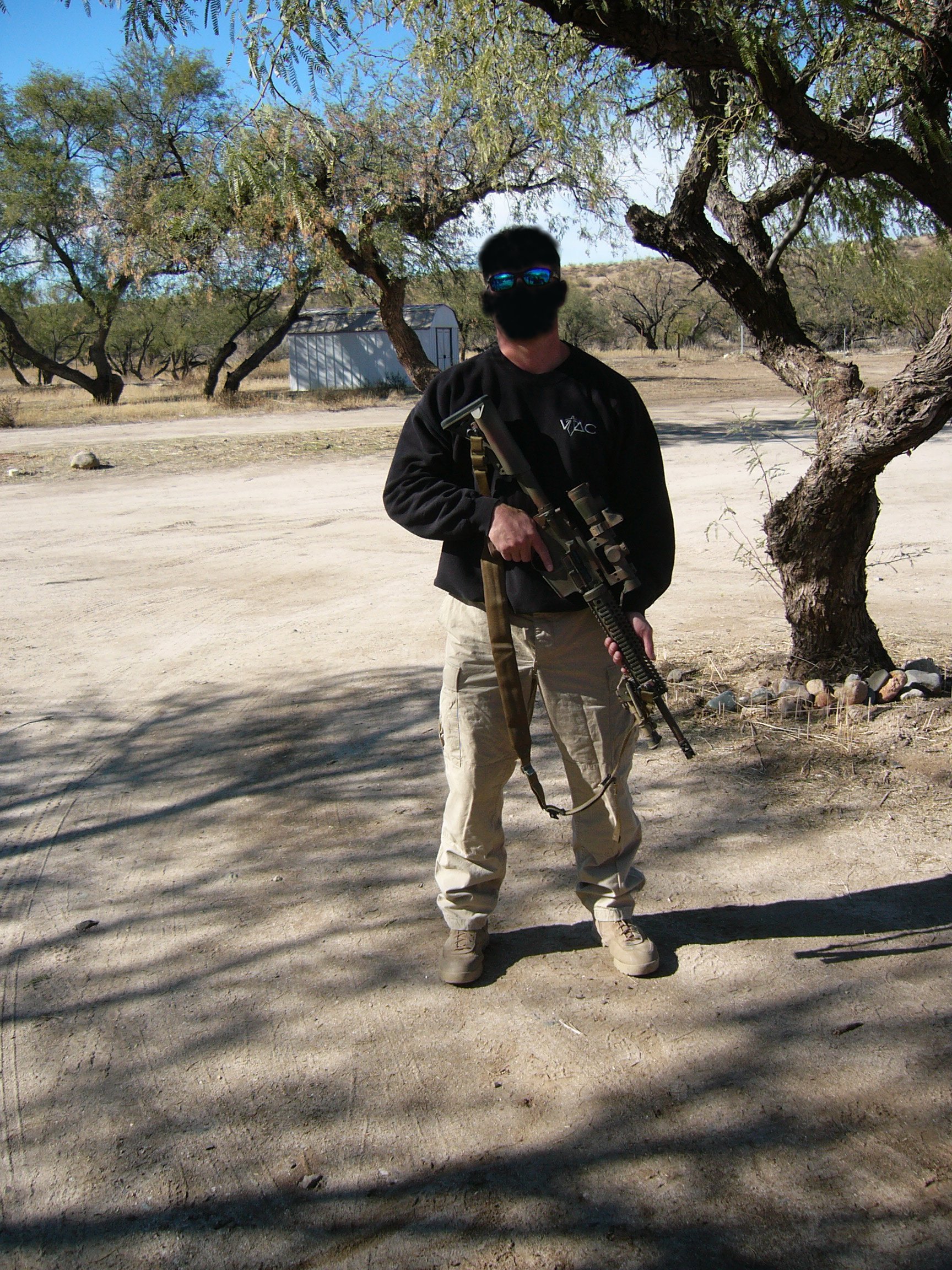 About the Author: Michael Pannone a.k.a Mike Pannone is a former operational member of U.S. Marine Reconnaissance, U.S. Army Special Forces, and specially selected elements of the Joint Special Operations Command. He has participated in stabilization, combat, and high risk protection operations in support of U.S. policies throughout the word as both an active duty military member, and a civilian contractor. During his military career Mike was the Distinguished Honor Graduate of a Level 1 SOTIC held at Ft Bragg. He currently instructs U.S. military, law enforcement (LE), and private citizens around the country as an adjunct instructor with several different organizations. He can be contacted via e-mail at ctts at live dot com.

(Please read the bio of the soldier pictured on the LaRue Tactical Website. He was a good friend, a great Operator, and a great American. He is missed by many.)

David Crane started publishing online in 2001. Since that time, governments, military organizations, Special Operators (i.e. professional trigger pullers), agencies, and civilian tactical shooters the world over have come to depend on Defense Review as the authoritative source of news and information on "the latest and greatest" in the field of military defense and tactical technology and hardware, including tactical firearms, ammunition, equipment, gear, and training.
Previous 21st Century M14/M1A Battle Rifle: Meet the Troy Modular Chassis System (MCS)
Next Petition to Save the Second Amendment…