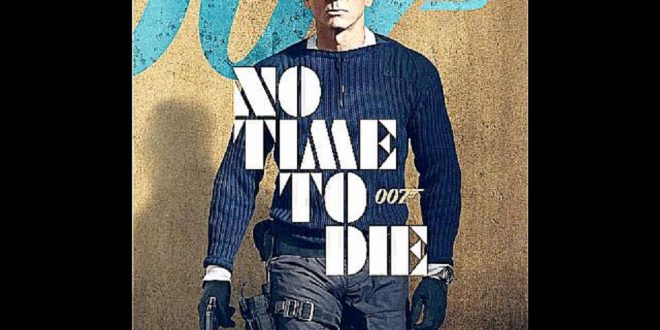 TactiSMART at the Movies: James Bond 007 ‘No Time to Die’ (Bond 25) Movie Trailer Analysis and Commentary

It’s the best movie trailer, ever.

It opens with Daniel Craig’s James Bond and his newly married wife Dr. Madeline Swan running for their very lives in mountainous Italy. Will this be her “swan” song?

How did they get to this point?

WHO is after them?

Didn’t they retire into seclusion at the end of 2017’s SPECTRE?

The No Time to Die (NTTD) Trailer has caused such a stir–not just with 007 fandom–but action-romance-adventure lovers around the world, creating a new genre of YOUTUBE videos: the audience reaction video.

Some of the audience reaction NTTD videos are simply stunning…as numerous red flags are raised and questions asked and not answered, some are in tears…is Bond going to even make it this time?

However as good as NTTD portends the whole movie will be, it continues several BAD Bond tactical foolishness that must be corrected ASAP even if possible as its being edited for an April 2, 2020 release. SIDE NOTE: Please EON Productions, offer non-cost-prohibitive Hot Wheels Aston-Martin DB5 cars at the theaters while NTTD is playing!

Poster art absurdly shows Craig’s Bond in a Royal Navy Blue Commando sweater with a leg holster for a PPK POCKET PISTOL! Only depicting 007 shooting down Blofeld’s helicopter with a hand-held, 7.65mm PPK with iron sights at night over 100 meters away is more audience convention-breaking. Today’s fans know the REAL WORLD demands at least 9mm Parabellum/9x19mm NATO rounds fired from a semi-automatic are needed even to down a gunman in a rural Texas church. Replace Bond’s PPK with a Glock 43 (G43) series or KelTech PF9. Or, as a nod to tradition, a Walther PPS series, and have it in his tactical pants side pocket as last-ditch back-up. If he wants to go pacifistic and toss it into the Thames river, her Majesty’s government will bill him for his ballistic blasphemy. Is that a credit or debit card, Mr. Bond?

Craig’s 007 began soundly in 2006’s Casino Royale with an Inside the Waist Band (IWB) full-sized Walther P99 concealed under a light tropical button down shirt. He blasted the propane tank with several 9mm rounds to explode embassy Soldiers and make his escape with the bomb-maker’s cell phone for actionable intelligence.

9mm is No Longer Good Enough Against Armor-Clad Thugs

9mm Parabellum/9x19mm NATO rounds, even from a full-sized pistol, will not pierce SOFT body armor (unless they’re expensive, hard to obtain AP rounds). Only FN’s Five-seveN 5.7mmx28mm pistol will do. Ruger now has a 57 pistol called, appropriately enough, the Ruger-57, that’s a more ergonomic gun. For the sake of advancing both art & science, depict Bond with an-not-yet-existent, SIG SAUER M320-M17 in 5.7mm with the Universal Service Weapon (USW) folding stock so he can pierce both soft body armor even bad thugs now wear and not let them get close by extending his range reach with the more stabilized firing position. Have the 5.7mm Personal Defence Weapon (PDW) in Bond’s leg holster justifying it mobility impediment for quick change-over from his primary M4 carbine in 5.56mm seen in the NTTD trailer. The USW also enables a day reflex, night firing, red dot collimator sight to be carried independent of the pistol slide whose retraction now does not slow down aiming by having to use its iron sights.

5.56mm with a Grenade Launcher, Please? Don’t Have One?

In the NTTD trailer, Bond explodes a bad guy SUV with a 40mm grenade (“Meet my Little Friend” said Pacino’s Scarface) fired from under a M4 carbine in 5.56mm. If its not too late for NTTD, integrate some Aim-Down-Sights (ADS) footage of Craig firing the 40mm and its parent carbine using a red dot sight as a nod to 007 video game players as well as us actual military & spy professionals. If Bond is unwisely entering an indoor location like Reeve’s John Wick likes to do, as he wades into civilians he is sworn to defend, he would be better off with a magazine-fed, 12 gauge shotgun under his carbine–first to gain entry through a door lock, then hit only bad guys with 00 buck shot and flechettes to go through their temporary firing positions and suppress their fire so he can maneuver forward in a running slashing attack.

Like an AVG Flying Tiger, P-40 slicing through Japanese ZEROs and not getting fatally stuck in a turning fight, if Bond runs upon a foe within his 21-foot Personal Defense Zone (PDW) he can let go of his long gun held by a sling to take them out with combatives aka martial arts–but keep running & gunning forward. If he is employing his pistol, it should have a wrist lanyard so he doesn’t drop & lose it if he has to execute unarmed combats, grab things with his hands etc. He drops his carbine’s mags as he reloads–but picks up new ones from the dead guys he’s just dropped when his own loaded mag supply runs out.

If Bond has to high explosives blast a target, he whips out a bullet trap rifle grenade from his hard body armor pouch, attaches it on the muzzle end and fires a live round to propel it to explode a car, truck or wall. Remember the rifle grenades from Small Fast Boats in “From Russia with Love” in 1962? The Czech Border Guards in 1997’s The Living Daylights?

Speaking of body armor, where is it wannabe Lynch? You haven’t been doing your 00 due diligence–nor has Craig’s Bond. How many times must he be hit before he learns looking TACTICOOL in black or a blue sweater doesn’t stop bullets? Both should be wearing soft body armor that stops most pistol bullets with hard plates that stop rifle bullets over them with magazine pouches on top (Editor’s Note: Going by the author’s train of thought, a lo-pro/lo-vis tactical armor plate carrier in blending color scheme should/would do the trick.)–not being TACTISMART, it doesn’t look like the “black 007” is going to survive the mission she began with Craig against the Deformed Face Villain (DFV) shown in the NTTD trailer.

Suggestions/Story Ideas for the Next Bond, #26

Open the 007 traditional, aim-down-gun barrel sequence tracking Bond, but after he fires and the barrel lands & grooves fill with blood switch–to his Aim-Down Sights view of the dead thug. Dissolve to black.

Have the mission go sour because the enemy converges on the foot-slogging team with tracked tanks and show them running out of long-gun, 5.56mm ammunition, which bounces off the enemy’s vehicle armor harmlessly. Their extraction helicopter gets shot down by enemy automatic cannon fire (like Fleming’s Bond does at the end of Diamonds are Forever) trying to rescue them. Out of rifle ammo, Bond’s team lets go and their long guns fall slung at their backs as they go to their 9mm pistols whose bullets do no damage against the swarming enemies (like the bugs in Verhoeven’s Starship Troopers (Editor’s Note: Great, and hilarious, movie.) wearing soft body armor. Several men are lost so they have to break-up into 2-man teams and escape & evade for their lives.

Bond goes on an epic adventure returning finally to MI6-SIS in London where in the de-brief, their lack of armored, cross-country mobility & firepower is addressed resulting in “Q” presenting him his new 5.7mm pistol with folding stock, red dot sights and while the NTTD bullet-resistant DB5 sports car with 7.62mm Gatling miniguns is cool, they need an Aston-Martin TANKETTE–a thickly-armored, bullet-shedding, parachute aidrdroppable, amphibious, cross-country-mobile, M113A4 Super Gavin with 30mm autocannon, smokescreens–and other tricks–as Bond takes his team and a hot Bond chick who knows the whereabouts of the villains, back in to rescue his comrades–and finish what they set out to do: capture the SPECTRE leader making deals with renegade Chinese generals to get a backpack nuke to explode the CHUNNEL to further their SILK ROAD High Speed Train (HST) land bridge to Europe. Have Bond parachute land on top of a HST train to chase down the SPECTRE thugs by a shoot-out inside transitioning to his 5.7mm pistol after his 7.62mm rifle and 12 ga shotgun runs dry. He cannot collect and use enemy ammo, which will not fit into his long guns. He defeats armor-clad thugs, stops the train and disables the SPECTRE leader’s 4×4 SUV from a long distance using 5.7mm pistol fire using its USW shoulder stock. Unbeknownst to Bond, the SPECTRE leader’s QRF in tracked tanks Mi-26 Halo heli-lands and snatches him and the bad guys up, taking him back to a secret mountain base where the supervillain gives his mono-logue (tradition!).

Bond has been discretely sending his GPS coordinates back to his QRF that roars in flying AeroGavins, assaults the fortress in a battle royale. Bond, Girl and QRF escape as the villain explodes his secret base.

TACTISMART will return to review the John Wick movies.

Mike Sparks is the U.S. military marine and Airborne infantry officer/change agent who got red dot reflex/night sights and the M9 Wire Cutter Bayonet (WCB) into widespread, U.S. military service. combatreform.org/nightvision.htm. He is the author James Bond is REAL: the Untold Story of Political Military Technological Threats Ian Fleming Warned Us About.. Go to http://www.lulu.com/shop/mike-sparks/james-bond-is-real-authors-edition/paperback/product-16508731.html to purchase your very own copy.

David Crane started publishing DefenseReview.com (DR) online in 2001. Since that time, governments, military organizations, Special Operators (i.e. professional trigger pullers), agencies, and civilian tactical shooters the world over have come to depend on Defense Review as the authoritative source of news and information on “the latest and greatest” in the field of military defense and tactical technology and hardware, including tactical firearms, ammunition, equipment, gear, and training.

TactiSMART at the Movies: James Bond 007 ‘No Time to Die’ (Bond 25) Movie Trailer Analysis and Commentary by David Crane

David Crane started publishing online in 2001. Since that time, governments, military organizations, Special Operators (i.e. professional trigger pullers), agencies, and civilian tactical shooters the world over have come to depend on Defense Review as the authoritative source of news and information on "the latest and greatest" in the field of military defense and tactical technology and hardware, including tactical firearms, ammunition, equipment, gear, and training.
Previous Did Soleimani get JAGM’ed? A Little Follow-Up on the Joint-Air-To-Ground Missile, Precision-Guided Goodness
Next Condor Elite Pursuit Pack Hard Armor Shield Backpack and Vanquish RS Plate Carrier (Body Armor) Get Updated and Upgraded!