SRM Arms, Inc., run by Jeffrey Hajjar, introduced a very interesting high-capacity, rotary-magazine-fed semi-auto 12-guage combat shotgun called the Model 1216 that generated a lot of interest at SHOT Show 2008. Magazine capacity is 8, 12, and 16 rounds, depending on either the length of the shotgun (there are several models/sizes) or where your set the front magazine retention latch. The 4-chambered rotary magazine is underbarrel-mounted, and looks like a Calico Light Weapon Systems (CLWS) helical-feed magazine, which is appropriate, since the same designer/engineer designed both magazines. However instead of the rounds being fed in helical fashion, the new shotgun’s rotary mag feeds the rounds linearly (i.e. straight), and the shooter has to manually rotate the magazine as he’s firing with an ambidextrous thumb lever located above the front of the magazine at the front mag retention latch area. The magazine is rotated by pushing up on the lever and simultaneously rotating the magazine clockwise, if you’re right-handed. If your left-handed, you would rotate the magazine in the opposite direction.

The 8-round mag, designed for the short-barreled shotgun version of the Model 1216, gives you… 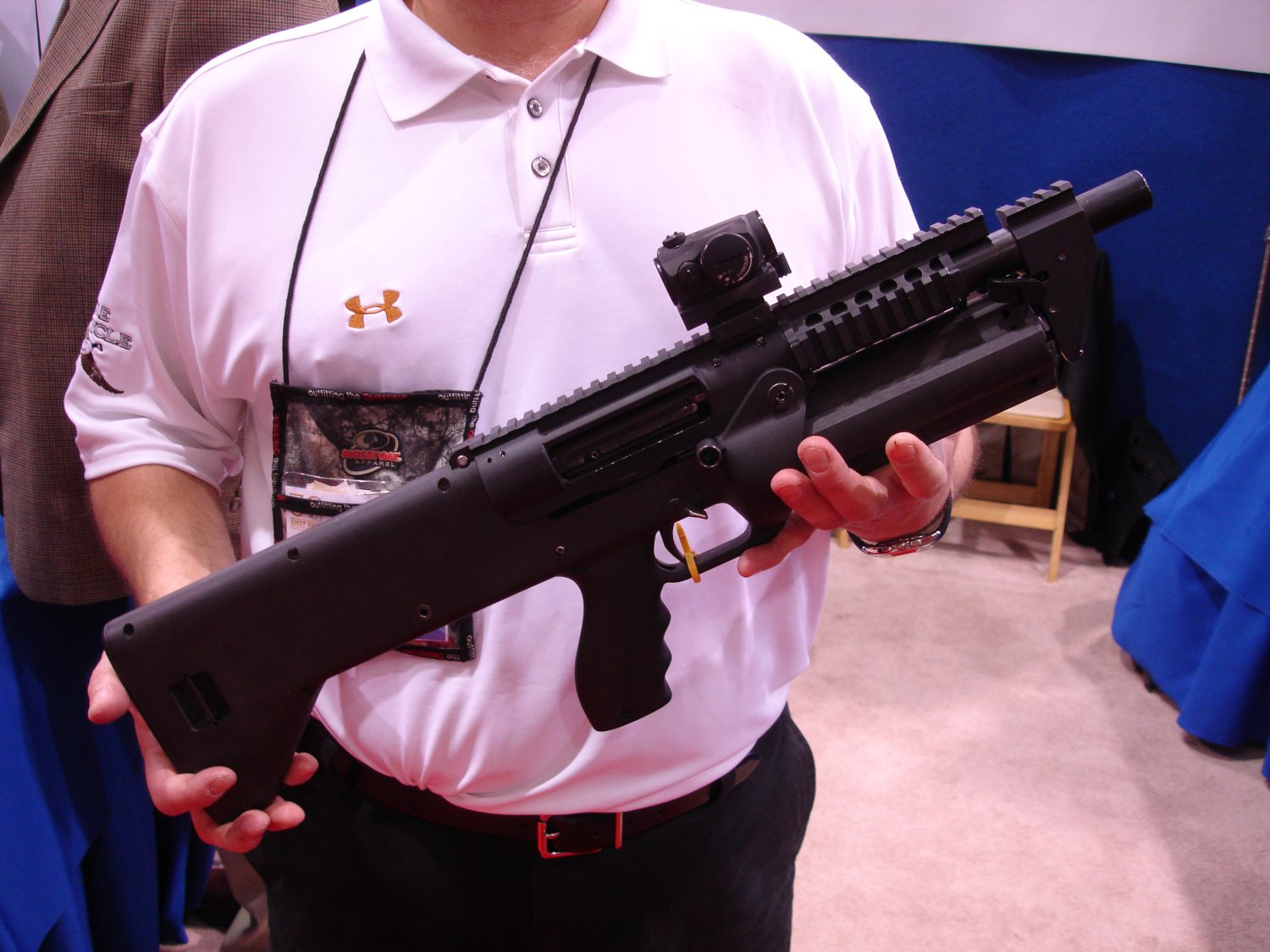 The magazine release button is located a little farther forward and is activated with the shooter’s weak-hand index finger. The SRM rotary-mag combat shotgun disassembles quickly and easily, and the first part of the procedure is AR-15/M16-like. Once you flip up the upper receiver, you can remove the one-piece bolt carrier group.

The charging/cocking lever is ambidextrous. For a right-handed shooter DefenseReview prefers that it be left-side-situated, so it can be operated with the weak hand.

Subsequent to the show, Defense Review spoke with Chen Lee (a.k.a. "SMGLee") about the SRM Model 1216 semi-auto rotary-mag shotgun, and he had some concerns. First of his concerns is the fact that even with the 16-shot version, you onely have four (4) rounds per chamber. So, if you’re involved in a firefight that requires the shooter to fire more than four rounds out of the gun in rapid succession, the shooter has to keep track of the rounds he’s firing as he’s fighting, in order to know when to manually rotate the mag, which is probably not easy to do under stress. 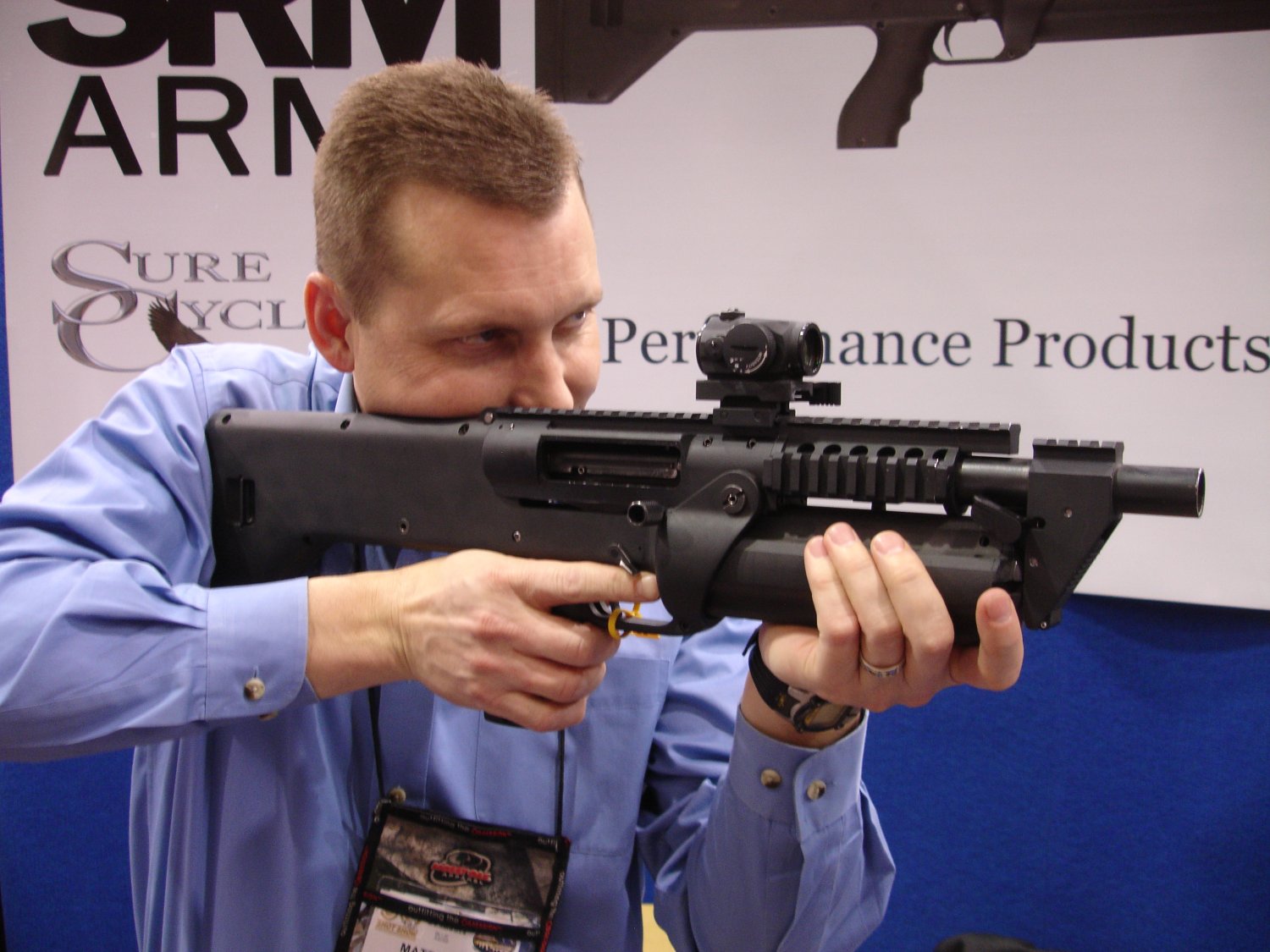 Based on his analysis and handling of the SRM shotgun, Mr. Lee believes that he can engage more targets more quickly with his Benelli M1 Super 90 combat shotgun, which allows him to carry nine (9) rounds in the weapon ready to go, including one of the rounds riding on the bolt carrier, which is unique to the Benelli.

DefRev wonders if it’s possible to develop the weapon so that the magazine automatically rotates as each chamber empties. We’ll post this question to Mr. Hajjar when we speak with him again.

Lee also doesn’t like the location of the manual thumb lever for rotating the magazine. He thinks it’s located too far forward for comfortable operation, and would prefer that it be located significantly further back on the weapon.

Defense Review shot video of the SRM 1216 shotgun at the shows everything we’ve written about the weapon, above. We’ll try to post it as soon as possible.

SRM Arms, Inc. is a subsidiary of SRM Performance Products, which is a division of Snake River Machine, Inc.

A Subsidiary of SRM Performance Products 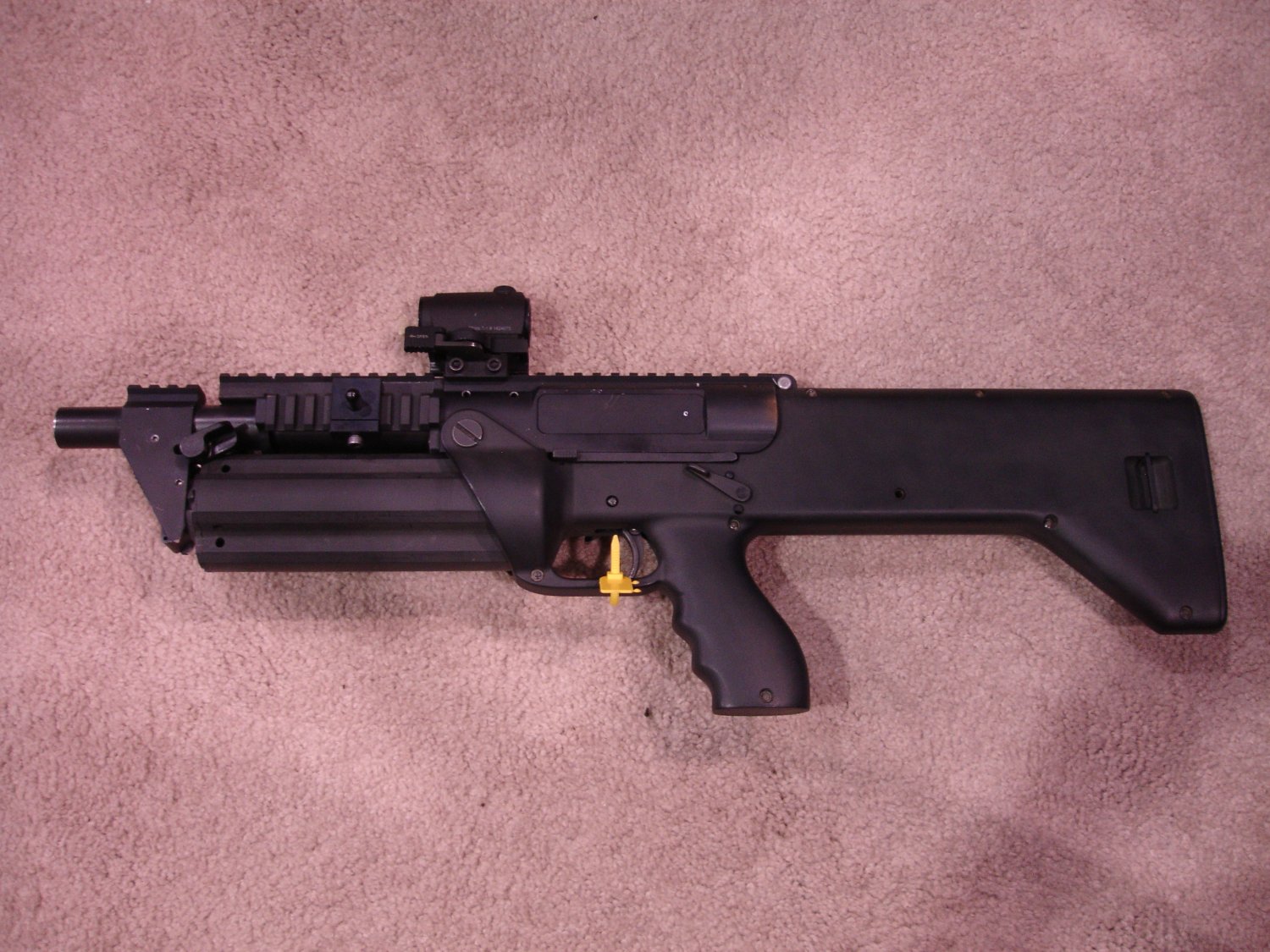 David Crane started publishing online in 2001. Since that time, governments, military organizations, Special Operators (i.e. professional trigger pullers), agencies, and civilian tactical shooters the world over have come to depend on Defense Review as the authoritative source of news and information on "the latest and greatest" in the field of military defense and tactical technology and hardware, including tactical firearms, ammunition, equipment, gear, and training.
Previous Cammenga EasyMag: Fast-Loading, Sliding-Front Next-Gen AR-15/M16 Rifle Magazine
Next Kel-Tec RFB Rifle/Carbine (7.62mm NATO/.308 Win.) at SHOT Show 2008