The following is an Associated Press (AP) article:

"The Bush administration’s argument for shunning a global treaty on land mines rests largely on the U.S. military’s use of "smart," self-destructing mines that don’t linger after wars end to kill and maim civilians. But it has a quiet subtext: the expectation that future generations of mines will be so smart that soldiers can activate and deactivate entire minefields by remote control.

Smart mines that are programmed to self-destruct, sometimes within hours, have been…

used by the U.S. military for about two decades. They accomplish the feat in a pretty low-tech manner — with an internal clock or a battery that has to run out eventually.

Future U.S. mines, however, would be enhanced with radio communications and network sensors to ensure that the munitions comply with a State Department edict, issued in February, that they all be detectable by U.S. forces and automatically defuseable. Soldiers would communicate with their mines through coded signals — and know the munitions’ precise locations, said Lt. Col. Rivers Johnson, a Pentagon spokesman. Johnson would not specify how that would work, but military analysts described possible ways.

A mine could generate a low-power radio signal at a frequency known only to U.S. forces, said Loren Thompson, a defense analyst with the Lexington Institute. Soldiers would have to respond with a proper password to tell the mine to turn itself on or off.
"If you were trying to protect an area, you can actually place a minefield, then only turn it on when you need to," said Randall Steeb, a senior systems analyst at Rand Corp. He said such mines would cost "a few dollars to about $10, probably single digits."

Other analysts question the wisdom of radio-controlled mines.
Frank Gaffney, founder of the Center for Security Policy, suspects it wouldn’t be long before an enemy could reverse engineer radio mines and figure out how to manipulate them.
Steven Zaloga, an analyst with Teal Group, a defense consulting firm, said radio transmissions are likely to be problematic in a small device like a mine that has to be buried.

"There’s no question that you can develop something that can do all this stuff," he said. "The question is, is it going to be small enough? Mines have to be somewhat inconspicuous, and on the other hand, be fairly reliable to pick up these radio signals. A certain fraction of the systems is likely to fail just because the data link fails."

Mines can be scattered from planes or by ground forces. An anti-tank mine might knock an armored vehicle out of service, or it might destroy the tank’s weaponry and kill the crew. An anti-personnel mine, designed to maim or kill, also can damage non-armored vehicles.

Smart mines don’t impress human rights groups, which say the world would be better served if the United States joined the 150 nations that have signed the 1997 Ottawa treaty banning mines altogether.
Some mines are only so smart and fail to self-destruct, said Stephen Goose, who oversees arms control at Human Rights Watch. That keeps certain territory off limits to civilians, and still requires the painstaking work of de-miners.

Opponents also point out that mines are hardly essential to U.S. forces these days. The Pentagon says it hasn’t deployed one since it scattered 117,000 of them during the 1991 Persian Gulf war. But Johnson said the Pentagon continues to invest in improving mines in case they are needed.

One new weapon the Defense Department is considering deploying consists of anti-tank mines that can hop around a battlefield on their own, to fill gaps created when other mines blow up or are defused.
The Pentagon calls the project, developed by its DARPA research arm, a "self-healing" minefield — designed to make the buffers more difficult to breach.

A more definitive project is an Army program to link several anti-vehicle mines known as wide-area munitions, or WAMs.
WAMs have acoustic and seismic sensors to sniff out armored vehicles and blow them up. If WAMs can be configured into a network that can talk to soldiers, "it can say, ‘There’s a convoy going through this road. Go ahead and arm,’" Steeb said.

A separate project, known as the Non-Self Destruct Alternative, is designed to replace the old-fashioned "persistent" mines used to defend South Korea. The new mine policy calls for persistent mines to remain in Korea until 2010.

Future munitions in development would put "a man in the loop" — requiring interaction with a human, stationed remotely at a computer, who would elect when and how to fire them.
The program involves a battery-operated system known as Spider, which has six canister-like valves on the outside, and a global-positioning chip and a radio inside. After the Spider is hand-placed by a U.S. soldier, the device’s operator monitors and fires it from a laptop computer up to a mile away — though communications repeaters can be used to extend the distance.
When an enemy triggers one of a half dozen tripwires, the Spider signals a U.S. soldier, who can fire a grenade from the device. Operators can also shoot Claymore mines or "non-lethal agents," like a net or a terrible odor.

Spider could enter production in 2006, according to Jed Sheehan, vice president for advanced guns, sensors and munitions at Alliant Techsystems, which along with Textron Inc. was awarded a $54 million contract in 2002 to build the system.
A 2003 Army procurement report indicated that 290,000 Spider munitions are to be produced through 2009, for $513 million.

While mine opponents say "man in the loop" would be a big improvement, some are wary that the Pentagon will insist Spiders be programmed so they can function on their own if need be — essentially making them as autonomous as traditional mines.
A decision on whether to include that feature has been put off until 2005.

Tim Rieser, an aide to Sen. Patrick Leahy, a Vermont Democrat and vigorous mine opponent, said the autonomy feature "would be inconsistent with the whole premise of the alternatives program."
"Whether or not the U.S joins the treaty," Rieser said, "Senator Leahy believes we should use weapon technologies that are not indiscriminate." " 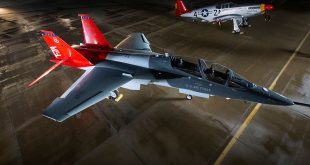