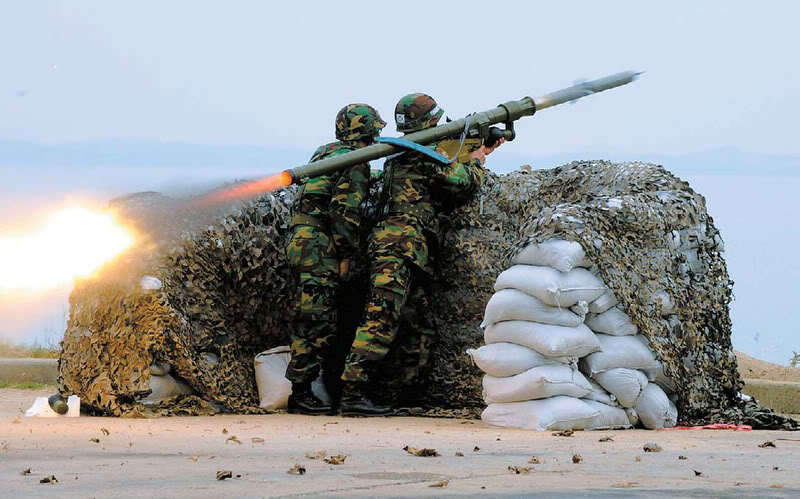 The IGLA-S is essentially the Russian equivalent of the Raytheon FIM-92 Stinger Short-Range Air Defense (SRAD) system a.k.a. Stinger Weapon System a.k.a. Stinger Missile System, first made famous during the Soviet Aghanistan War during the 1980s, thanks to (Democratic) Texas Congressman Charlie Wilson. DefenseReview doesn’t yet know how IGLA-S and Stinger stack up against each other capability/performance-wise.

It’s possible that the Russians have already sold the IGLA-S to the Iranians, just as they have the advanced and sophisticated vehicle-mobile S-300 high-altitude surface-to-air missile system made by Almaz Scientific Industrial Corporation (ASIC) a.k.a. NPO Almaz. Defense Review doesn’t know whether or not Russia has any plans to sell the Iranians the even more advanced S-400 Triumf (NATO reporting name SA-21 Growler) air defense system.  According to the Los Angeles Times, “In July, the Bogota daily newspaper El Tiempo quoted anonymous sources in a secret Colombian government agency that tracks the FARC’s arms dealings as saying FARC leader Ivan Marquez was negotiating with ‘Venezuelan contacts’ to buy as many as 20 Russian shoulder-fired IGLA S-24 surface-to-air missiles.” The likely scenario is that the Venezuelan government (i.e. Hugo Chavez) is actively supplying the IGLA-S systems to allow the FARC to discombobulate the Colombian government’s counterinsurgency efforts.  Mr. Chavez has been engaging in quite the military arms buildup as of late, which is of more than a little concern to U.S. government officials.

The following IGLA-S info and specs come from the IGLA-S web page on the KBM website:

Purpose: the system is designed to engage front line aircraft, helicopters, cruise missiles and UAVs under direct visibility conditions and in the night time, head-on and tail chase, in background clutter and thermal countermeasures environment.

IGLA-S MANPADS is a new-generation system featuring considerably extended firing range and enhanced kill probability against aerial targets and possessing a new quality for this class of systems – high engagement effectiveness against small-size targets like cruise missiles and UAVs.

– enhanced kill probability against aerial targets and increased warhead lethality due to:
– increased HE quantity (by 1.5 times as compared to IGLA system);
– in-depth impact detonation of the missile warhead adjusting the rate of embedding to the approach speed;
– proximity detonation of the missile warhead (in the event of mishit) with optimization of the detonation point;
– detonation of the sustainer’s remaining solid propellant;
– advanced missile accuracy characteristics.
– extended firing range of up to 6.0 km as compared with 5.2 km for IGLA system due to missile improved aerodynamic characteristics;
– night firing capability due to application of a night vision device holder and a light weight night vision device development.
– easy installation on various platforms
Unified modules are the base for:
– formation of “air-air” guided weapon system;
– formation of a mobile air defence missile system of high covertness;
– combination with AD gun systems;
– combination with medium and long range air defence systems;
– formation of shipborne air defence systems.

David Crane started publishing online in 2001. Since that time, governments, military organizations, Special Operators (i.e. professional trigger pullers), agencies, and civilian tactical shooters the world over have come to depend on Defense Review as the authoritative source of news and information on "the latest and greatest" in the field of military defense and tactical technology and hardware, including tactical firearms, ammunition, equipment, gear, and training.
Previous “Brotherhood of Warriors” Takes You Inside the Secret World and Missions of Israeli Military (IDF) Special Operations Unit Duvdevan
Next SIG SAUER SIG516 Short-Stroke Gas Piston/Op-Rod Tactical AR (AR-15) Weapons Series