KBP Instrument Design Bureau (Tula, Russia) displayed an updated/upgraded version of the of the RPO Shmel Infantry Rocket Flamethrower thermobaric weapon system (a rocket launcher that fires a thermobaric warhead) called the RPO Shmel-M (full designation: RPO Shmel-M PDM-A) at Eurosatory 2006.
Adopted by the Russian Army in December 2003, the RPO Shmel-M is billed as offering 50% greater lethality (upping the punch to approx. 5.5 kg of TNT) at 36% less OA system weight compared to its predecessors, the RPO-A, RPO-D and RPO-Z Infantry Rocket Flamethrowers, which is impressive. Those previous versions are 93 millimeter (93mm) caliber and weigh a reported (approx.) 26.40 lbs/12 kilograms (12kg) (OA weight), so the RPO-M should hit the scales at approx. 16.90 lbs/7.66kg. This light weight, combined with a corresponding overall length (OA length) of 36.22 inches (36.22")/92 centimeters (92cm), make… 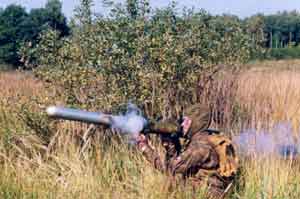 It’s also being reported that the RPO Shmel-M features a more powerful rocket motor than the RPO-A, -D, and -Z models, which is supposed to double its direct-fire accuracy against armored vehicles at a range of 300 meters (984.25 ft.). Sighting range for the Shmel-M is approx. 800 meters (2 624.67 ft., also an improvement over previous models), while maximum/elevated range (if the weapon’s fired from a helicopter or elevated position, for instance) is approx. 1700 meters (5,577.43 ft.).

DefenseReview is a longtime fan of the RPO Shmel thermobaric weapons (frankly, we’d like to see it in use with U.S. military infantry forces), so we’re very interested to see a demonstration of the new RPO Shmel-M PDM-A’s capability via either live demonstration or hi-res video demo. Since it’s not in the least bit likely that U.S. warfighters–other than U.S. Special Operations personnel–will ever get to utilize this weapon, we hope they can at least get something similar to it, someday. 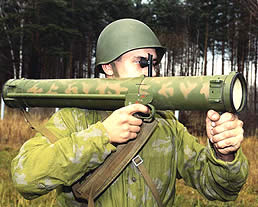 Defense Review saw a video demo of a thermobaric version of the 66mm HEAT Rocket M72 LAW made by Talley Defense Systems (TDS) at AUSA Winter Symposium 2003, and it looked pretty good. However, we don’t know how its performance compares to the RPO-A Shmel–let alone the new Shmel-M–and Talley Defense Systems doesn’t offer any information about it on their M72 LAW Products page. The Talley Defense SMAW-NE shoulder-fired thermobaric weapon is most likely closer in performance to the RPO Shmel series (unconfirmed/unverified), but we’ll research it. "SMAW" stands for "Shoulder-launched Multipurpose Assault Weapon".
The following is what KBP has to say about the RPO-A, RPO-D, and RPO-Z Infantry Rocket Flamethrowers: 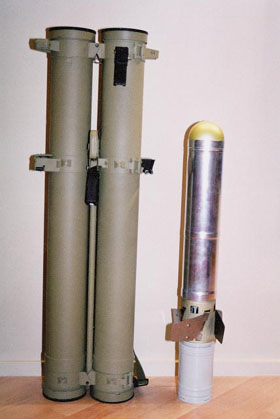 – the RPO-A (thermobaric) is intended to defeat covered fire weapons in urban areas, in the field and in mountains, as well as to demolish shelters, motor vehicles and lightly armored materiel;
– the RPO-D (smoke) is intended to lay smoke screens blinding the crews of fire weapons and create intolerable conditions in various shelters;
– the RPO-Z (incendiary) is intended to set up fires on terrain, in buildings, structures and fuel-oil depots.
These rounds can be fired from enclosures with a space of more than 60 m3, and in terms of the blast, blinding and incendiary effect they are equal to 105-mm artillery projectiles of similar assignment.
Up to now the RPO-type flamethrowers have no equivalents abroad.
The 9F700-2 computer-aided trainer is used to train the crews to operate RPO-A, RPO-D and RPO-Z flamethrowers."

In the world of thermobaric weapons (a.k.a. thermobarics), the KBP RPO Shmel series is definitely one to watch.

David Crane started publishing online in 2001. Since that time, governments, military organizations, Special Operators (i.e. professional trigger pullers), agencies, and civilian tactical shooters the world over have come to depend on Defense Review as the authoritative source of news and information on "the latest and greatest" in the field of military defense and tactical technology and hardware, including tactical firearms, ammunition, equipment, gear, and training.
Previous Liquid Armor, Armored Vehicles, and High-Tech Ballistic Fiber/Fabric…
Next Anti-Sniper/Sniper Detection/Gunfire Detection Systems at a Glance