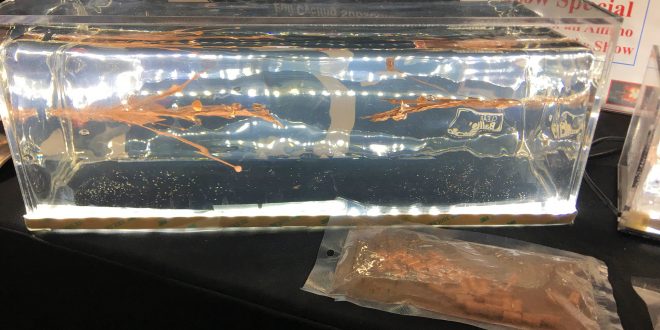 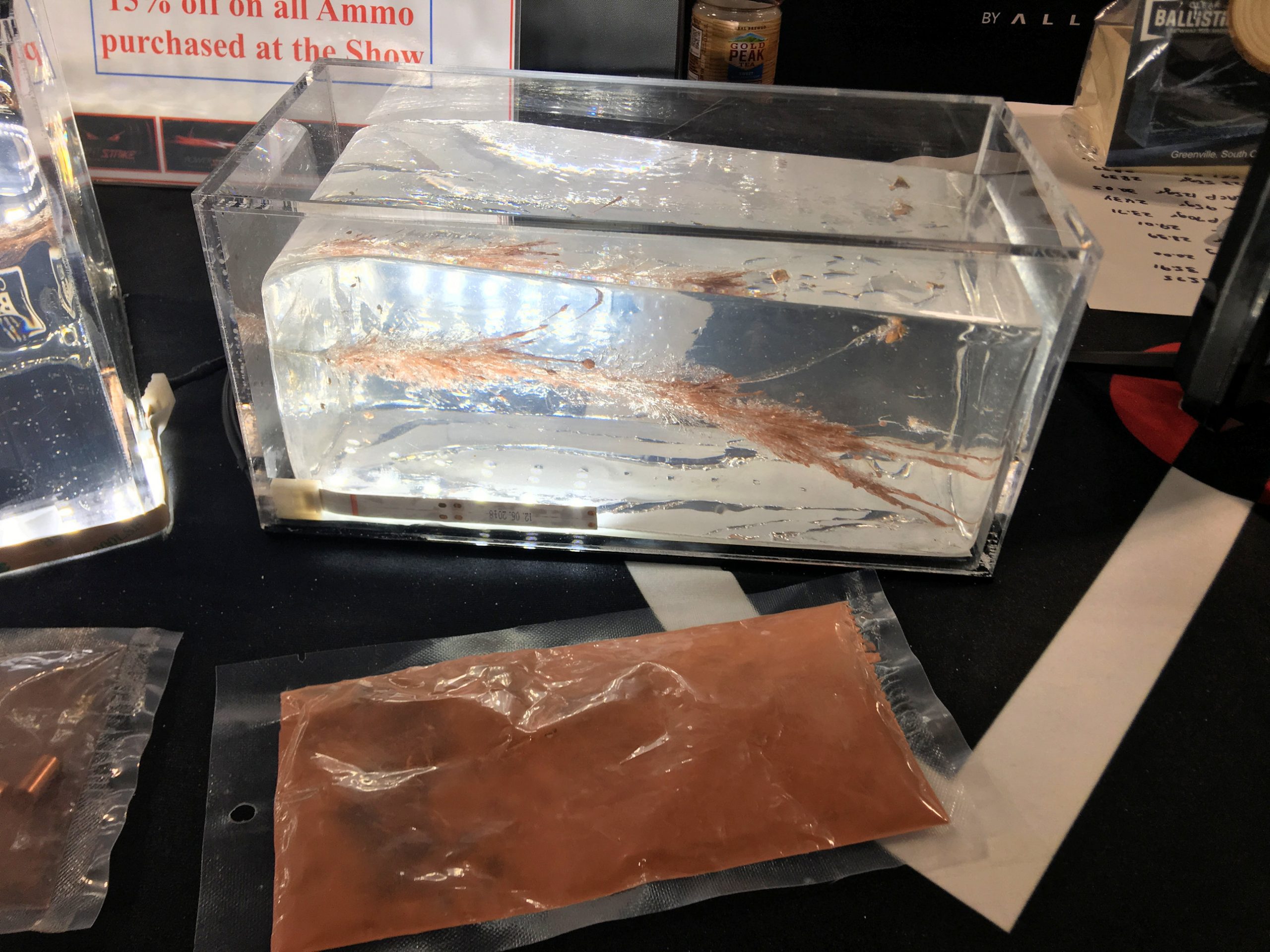 If you’re going to fight indoors with a rifle/carbiine/SBR (Short Barreled Rifle) or pistol, the best way to do it is suppressed, and with terminally-effective frangible ammo, provided you can do it reliably. That’s where Allegiance Ammunition comes in with their SilentStrike 5.56mm NATO (5.56x45mm NATO) and 9mm Parabellum/9x19mm NATO rounds. They also make it in other calibers like 300 BLK (Blackout) and .45 ACP, but we’re going to concentrate on the two NATO calibers for this piece, since that’s what most people use. Allegiance’s 110gr (grain) frangible 5.56mm round comes out of the barrel at 1050 FPS (Feet Per Second), and is billed as “the worlds only 556 110gr Jacketed Frangible Full Cycling subsonic round that will operate the AR weapon platform at 1050 FPS in semi and full auto and that is safe to shoot in suppressors,” and that’s all you really need to know about it. There are also 100gr Full Cycling Hybrid Subsonic and 95gr lead core non-frangible full cycling subsonic rounds to round out the options (excuse the pun), and provide more mission capability. 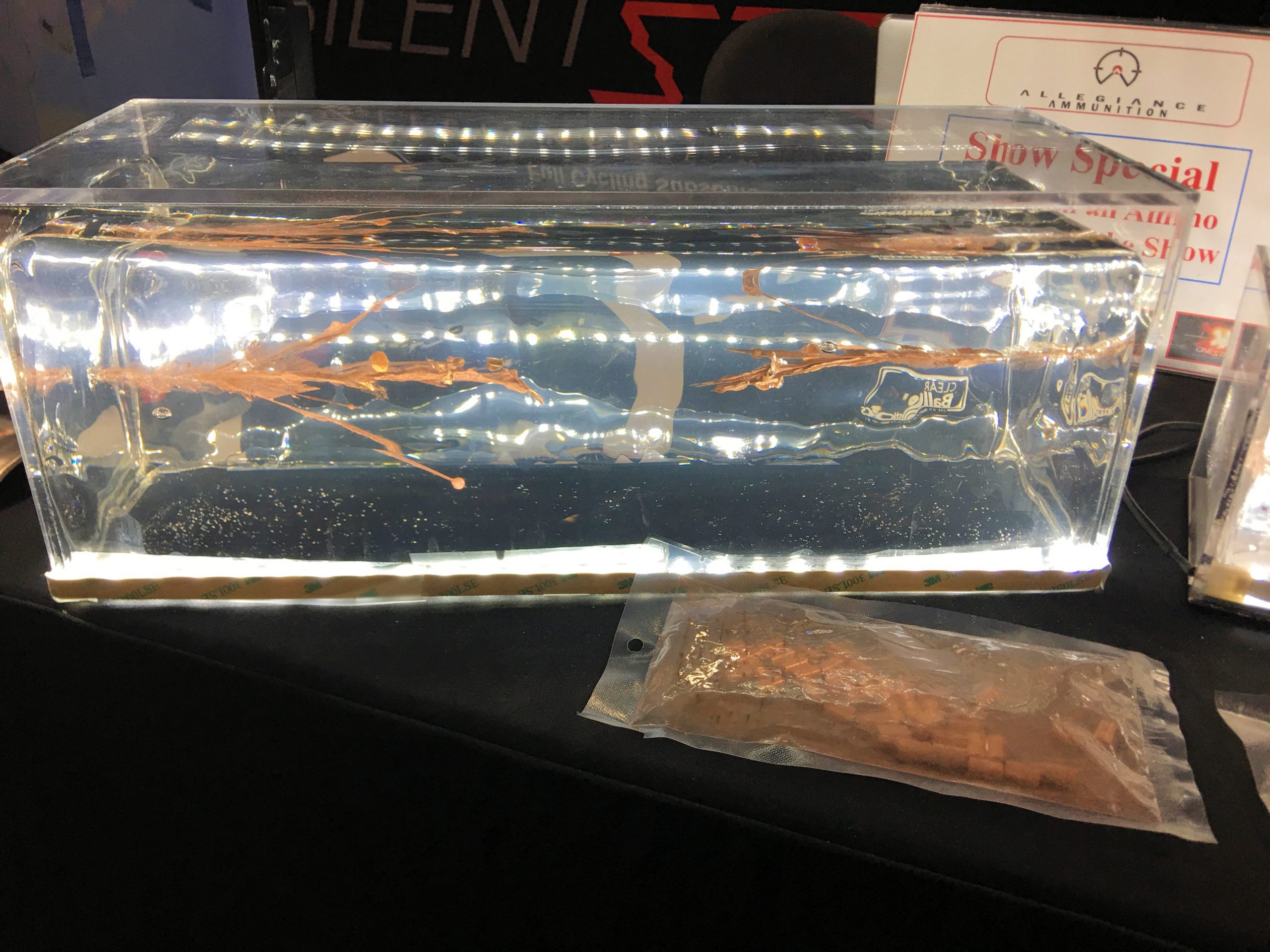 As you can see in the accompanying photos, Alegiance Ammo’s frangible 5.56mm rounds are devastating on target, creating ultra-lethal wound channels that are also likely to stop the target quickly. This ammo utilizes Powder Metal technology to achieve its 100%-energy-transfer effect, and it’s scary stuff. It’s designed to neutralize a target as quickly as possible, and the SilentStrike variants are designed to do this quietly, while shooting suppressed. No need to wake up the neighbors (during a home-defense engagement). Of course, SilentStrike 5.56mm ammo’s also effective for hunting.

DR doesn’t yet have any detailed info on the SilentStrike 140gr 9mm round yet, but we’re guessing it’s going to be very efective as a quiet home-defense round (with the use of a suppressor), as well. 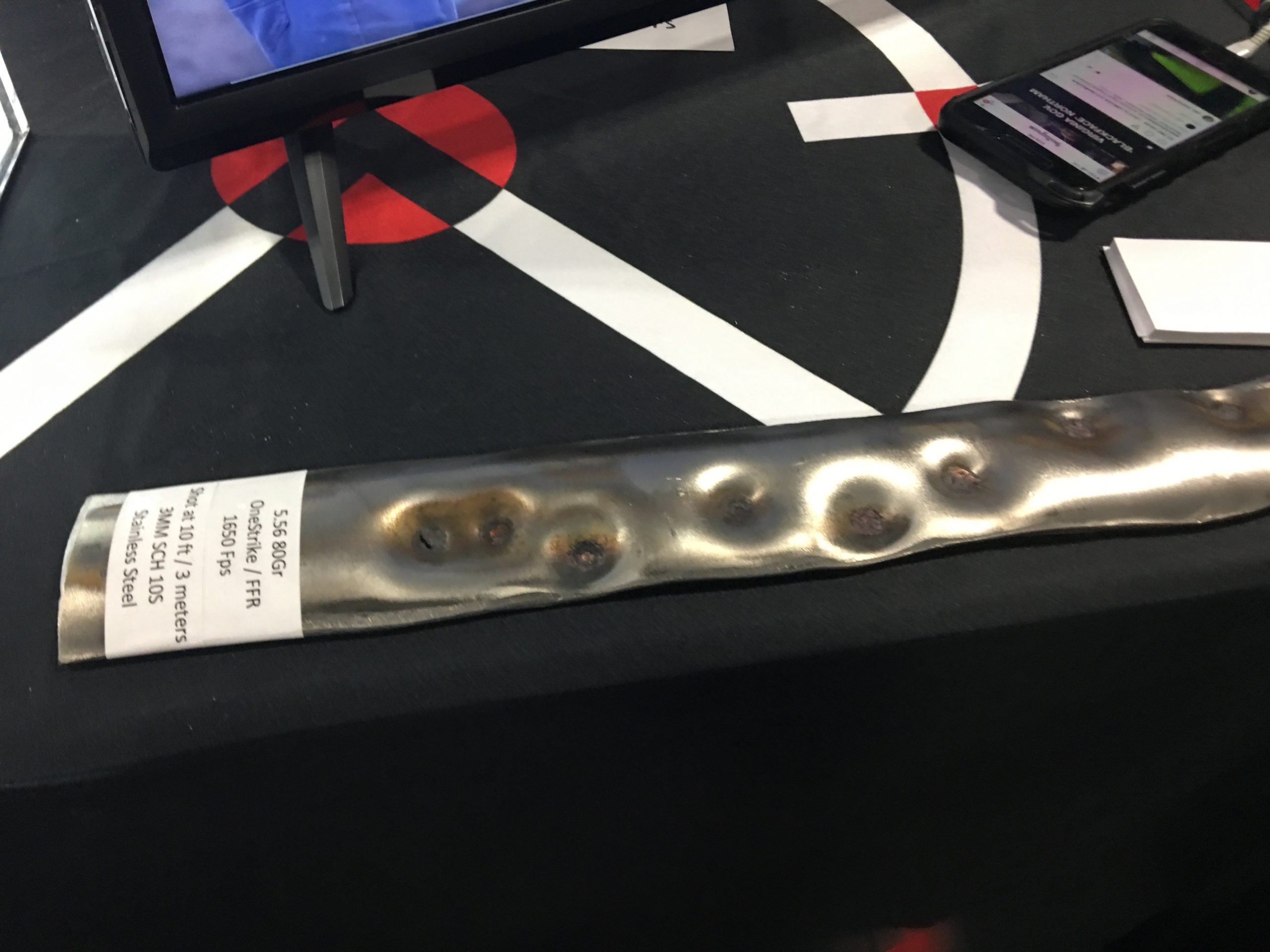 If you don’t need to go full-suppressed, Allegiance Ammo’s OneStrike .223 Rem, 5.56mm and 9mm ammo’s arguably the way to go, as they’re higher-velocity defense rounds. Here’s the skinny on the .223 and 5.56mm rounds from Allegiance’s website:

“OneStrike 223 55gr 3000 FPS ammo is designed for use in and around Urban structures/environments and high crowd areas such as schools, hospitals, court rooms, sporting events where shooting through a soft target or structural ricochet could spell disaster. With OneStrikes H.E.T. (High Energy Transfer) frangible core, this round accomplishes 2 things that is virtually impossible for standard type ammo to achieve.” Click here to read the rest.

“OneStrike 556 80GR 1575 FPS is CQB limited range, limited penetration (R2LP) ammo designed for use inside and around sensitive areas such as electrical and nuclear power plants, metal enclosures like ships, submarines, and high crowd areas like court rooms, schools, VIP protection or hospitals or churches where shooting through a soft target or structure or causing a ricochet could spell disaster.” Click here to read the rest. 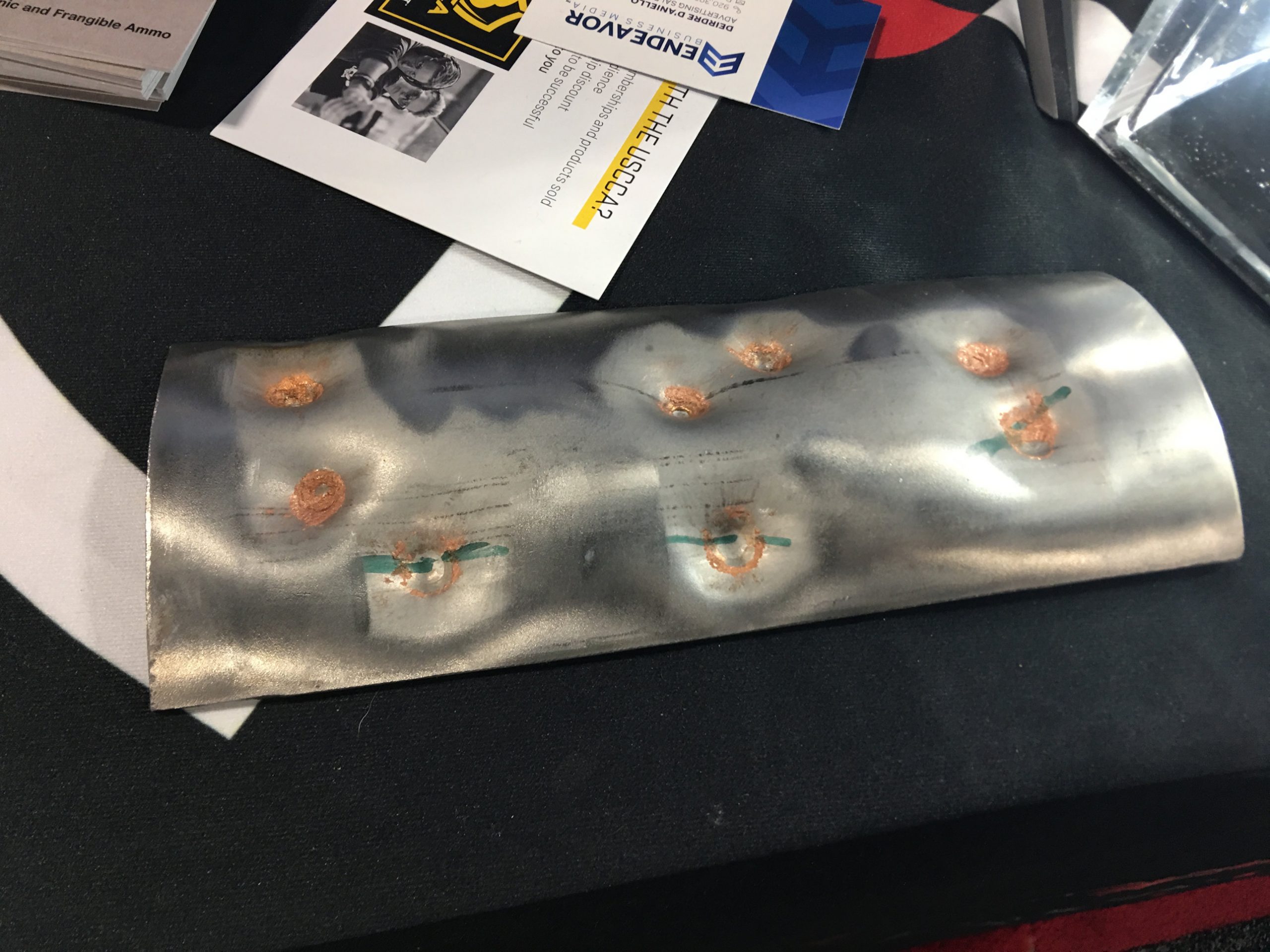 “OneStrike 9MM 90GR 1425 FPS is designed for CQB use inside and around sensitive areas, metal enclosures, home protection, self defense and high crowd areas where shooting through a soft target or structure could spell disaster. With its H.E.T. (High Energy Transfer) frangible core, OneStrike 9MM 90GR 1425 FPS and OneStrike 223 55gr will fragment on extreme light barriers down to a 3mm thin stainless steel pipe as it passes through the barrier with a direct hit at just 10 feet.” Click here to read more.

Editor’s Note: Defense Review’s known Allegiance Ammunition’s CEO and designer/developer Jeff Mullins for years, and we’ve always been impressed with both him, and with his Powder Metal frangible bullet technology. It’s pretty impressive stuff, and worth taking a serious look at for both personal and home defense applications, in our opinion.

McNett’s DoubleTap Ammunition Equalizer 165gr and 80gr 9mm +P Duplex Rounds at up to 1400-1600 Feet Per Second (FPS)! Are They “The Heat”, or Just Hype? Latest Gimmick or Ballistic Gold?

David Crane started publishing online in 2001. Since that time, governments, military organizations, Special Operators (i.e. professional trigger pullers), agencies, and civilian tactical shooters the world over have come to depend on Defense Review as the authoritative source of news and information on "the latest and greatest" in the field of military defense and tactical technology and hardware, including tactical firearms, ammunition, equipment, gear, and training.
Previous Beretta 92X F/G Compact 9mm Combat/Tactical Pistol for Concealed Carry (CCW): Up to 31 Rounds On Board! (Video!)
Next JJ Racaza’s Beretta 92X Performance 9mm Racegun Competition Pistol: Super-Fast Trigger with Short Reset, and 24+ Rounds on Board! (Video!)