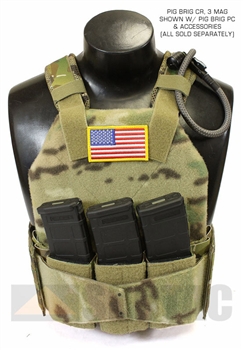 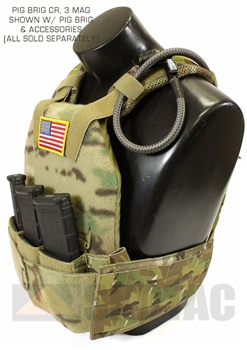 On December 12th Military Times GearScout's Rob Curtis published a piece on the SKD Tactical PIG “BRIG” Brigandine Plate Carrier [Systema] that, to be honest, didn't really perk our eyes up all that much. Let’s face it, just about everybody and their mother is making their own minimalist lo-pro/lo-vis armor carrier nowadays.

However, on December 14th, Soldier Systems chimed in with the following editorial and invitation for feedback on the carrier:

I see loads of armor carriers. If anything, I’m jaded. But, every once in awhile, something different comes along. SKD came to me a few weeks ago and showed me this video and I have to say that it impressed me. Watch this video and tell me what YOU think.

That got our attention…and we will. Overall, from the photos and (embedded) video, the SKD PIG BRIG Systema plate carrier looks like a well-conceived/designed and well-executed modular system. While neither photos nor a non-shooting/operations simulation demo video can adequately demonstrate any operational advantages the PIG BRIG can potentially provide the operator over systems made by the plethora of other tactical body armor/plate carrier manufacturers like Crye Precision, London Bridge Trading (LBT), Hard Point Equipment, FirstSpear, TYR Tactical, Mayflower R&C/Velocity Systems, or ArmorWorks, to name a few, they do provide enough information about the new carrier's features to perform a cold, visual (non-hands-on) analysis. So, the PIG Brigandine Systema carrier looks solidly designed, but how does it stack up to the competition? 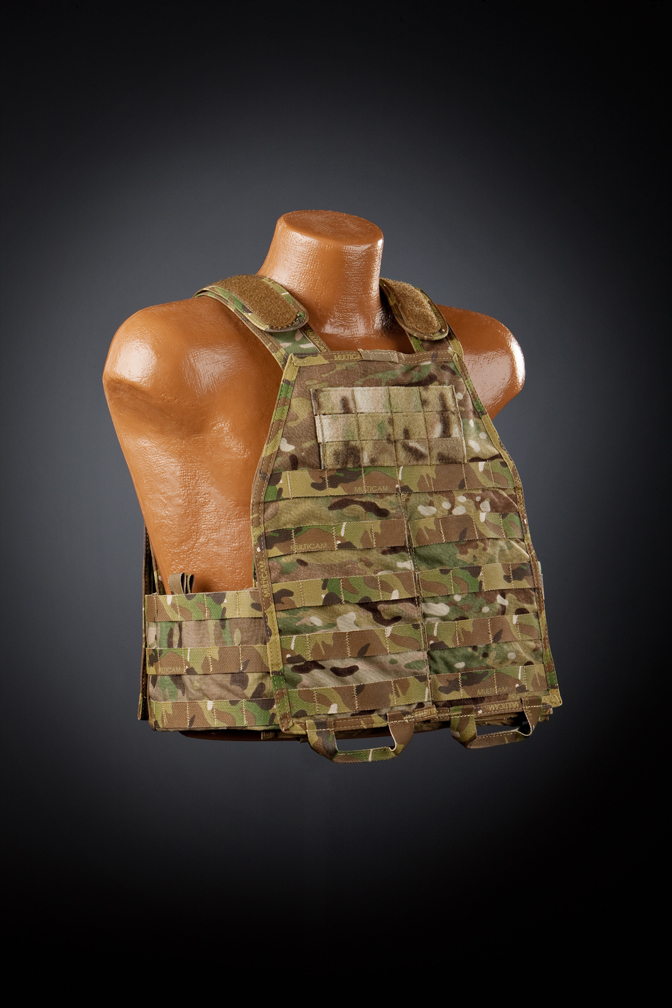 For the purpose of this article, we're actually going to do a feature-focused comparative analysis of the SKD Tactical PIG BRIG Plate Carrier Systema and Hard Point Axis Modular Armor System (AMAS), along with a single comparison point with the Mayflower/Velocity Systems APC. We're using the Axis for for comparison three reasons: 1) The Axis is similarly minimalist in design and we recently received one for review, 2) The SKD PIG BRIG sports a couple of features on it that invites comparison to it, and 3) Before receiving an Axis, DR had been running a Hardpoint Maniple-I carrier, so we're experienced with Hardpoint's products. We're mentioning the Mayflower/Velocity systems APC for one reason: it's also minimalist and appears to have gotten some traction with U.S. military SOF.

The SKD PIG Brigandine Plate Carrier [Systema]'s removable Pontoon system, a passive-cooling/ventilation pad system, is one of the first things that caught our attention while watching the video. We like it, but t's extremely similar to Hardpoint's modular, quick-attach/detach Velcro ventilation pad system, which is a proprietary-design that Hardpoint introduced at SHOT Show 2011 and that can be utilized on both the Hardpoint Axis and Core Assault Plate Manager (CAPM). Defense Review published photos and video on this padding system in March 2011 after we saw it at SHOT 2011. The original PIG carrier does not appear to have this feature, and DR isn't aware of any other carrier system that did have it before Hardpoint introduced it two years ago.

Understand that we're not saying that SKD directly copied Hardpoint's removable padding system. It just looks awfully close/almost identical in design. DR will inquire about this. If SKD has a booth at SHOT Show 2013, we'll also try to stop by and examine a PIG BRIG carrier in person to get a better handle on it.

The PIG Brig's use of complete velcro in the plate pocket with a back-up locking system is also very similar in concept to the Hardpoint carriers, but the method of application is different enough to not be construed as a copy of Hardpoint's design. 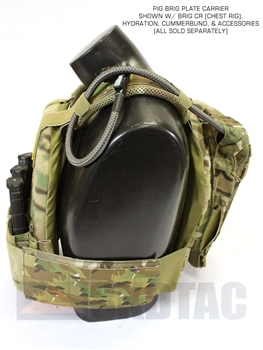 The way the PIG BRIG locks the mag pouches to the plate carrier appears (from the visuals) to be superior to the Mayflower/Velocity Systems APC's design. The SKD PIG BRIG's method of integrating/locking a chest rig to the carrier, and it's ability to do so, is pretty cool. It's also unique, as far as we're aware. It's possible that somebody else is doing something similar, but we can't name any competing products that do this off the top of our head.

The SKD PIG BRIG looks a bit clunky to us when you scale it up, though. For example, DR isn't crazy about creating a separate pouch for the soft armor that mounts where the ventilation pad goes. That seems conspicuously non-minimalist in a supposedly minimalist system. We're also not sold on the PIG BRIG's integral cummerbund. Due to the permanent cumberbund, there isn't an option for sideless use with straps only.

By contrast, the Hard Point Axis plate carrier stays clean, everything remains integrated and minimalist as you scale it up, and you can go sideless with just straps (more on this, below). Some other things we like on the Hardpoint Axis Modular Armor System: 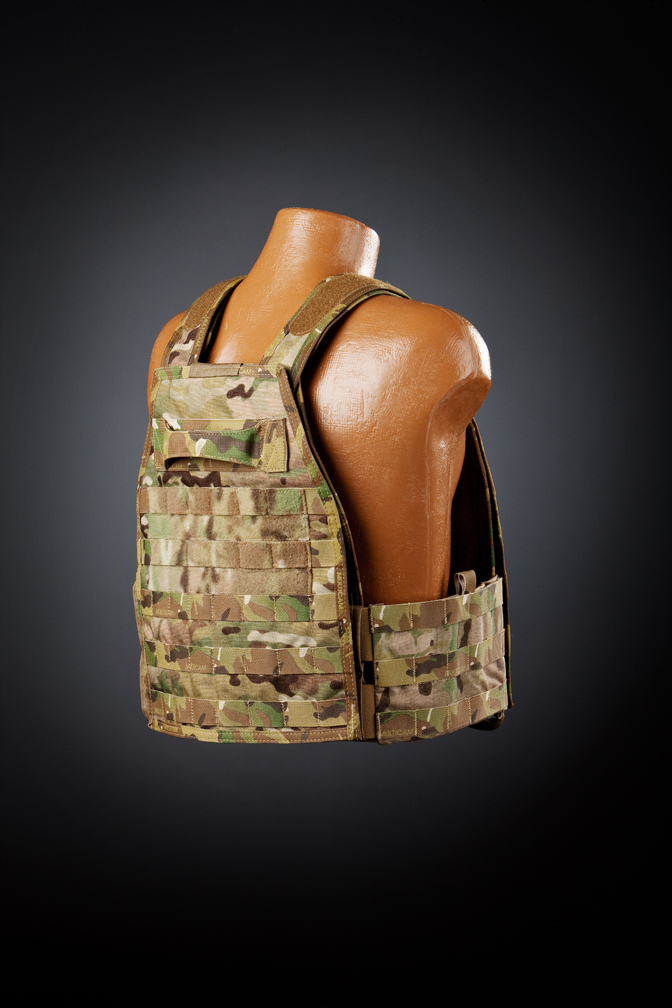 – Maximum level of modularity/versatility possible. The front and back panels/plate pockets, secured with a Velcro and tab system, are completely removable/replaceable.
– Ability to change entire loadout (not just mag pouches) without having to rely on any hardware that can break and is heavy (by comparison to fabric with velcro).
– Ability to accept many different ballistic plates and hold them securely (instead of being locked into a couple of specific plate sizes/shapes), including side plates.
– Ability to adjust the unique 3-point-design shoulder straps to the exact angle and length most comfortable for your particular body shape.
– The user can easily go sideless and adjust both front and rear for greater versatility (plates, soft-armor, both or none, jackets underneath, etc.)
– The aforementioned modular ventilation pads enhance both comfort and passive cooling. Hardpoint carriers were the first ones to feature this type of quick-attach/detach padding system, as far as we know.
– The user doesn't have to buy and apply numerous accessories to it. The few pieces the Axis MAS has all do what's needed on their own. With the PIG BRIG, if you want to run MOLLE accessories on the cummerbunds, you have to buy MOLLE panels to do so. If you want to run soft armor, you have to buy soft armor pouches. If you want to run the system with your own mag pouches, you have to buy a MOLLE flap for the front. This isn't optimal, in our opinion.

We should perhaps mention that while the Hardpoint Axis is minimalist, streamlined and cost-efficient, it's got one caveat. It's not designed for morons. It incorporates a multi-piece architecture that is incredibly modular/versatile, but isn't idiot-proof. If you want idiot-proof, we recommend the reader take a look at another Hardpoint Equipment armor carrier, the Hard Point Core Assault Plate Manager, which is simpler (less pieces) than the Axis–and you can't possibly screw it up. We'd like to run a Core armor plate carrier soon. The Core APM utilizes MBAV soft armor panels/inserts (for those who want to run soft armor panels), per a SOCOM requirement.

Editor's Note: In the SKD PIG BRIG Systema plate carrier video, the demonstrator mentions the Albuquerque PD SWAT team liking the system. That's great. However, with all due respect to LE SWAT operators (and we do respect them), DR is more interested in what U.S. military Special Operations Forces (SOF) and PSC PSD (Private Security Company Personal Security Detail) operators think of it, as SOF assaulters and PSC PSD operators generally have to wear their armor for significantly longer periods at a stretch, have to cover more distance in it, and generally have to actually fight more against more highly-armed opponents than SWAT operators.

The SKD PIG Brigandine Plate Carrier Systema and Hard Point Axis tactical armor plate carriers are both definitely worth checking out if you're looking for a new high-level carrier. The reader should keep in mind that DefenseReview is just going off the very limited info we've seen in the SKD PIG BRIG demo video and on the company's website. That's admittedly not much to go on. We haven't run the PIG BRIG Systema, nor have we spoken to anyone at the company about it, yet. It certainly looks like SKD's worked hard to develop it, and it's certainly possible that military SOF assaulters and PSC PSD security operators will end up really liking it. Time and Mil/PSC operator feedback will tell. DR actually has an Axis plate carrier in-house, but we haven't had the opportunity to run it at the range, yet. We'll try to get some Mil/PSC operator feedback on this system (and the Core carrier), as well. 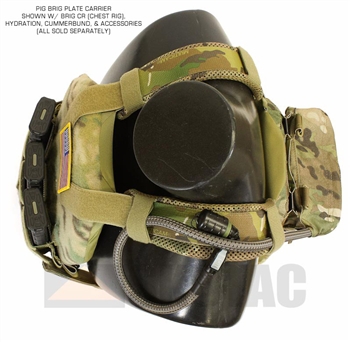 "Brigandine" is the word for medieval armor consisting of armor plates attached to a cloth shirt. The PIG Brigandine is today's version of just that- a low profile way to carry just your plates directly over your shirt or soft body armor. The "BRIG" is the first low-profile plate carrier we are offering for under $100.

Unlike some of other low profile plate carriers, the PIG BRIG is designed with the straps attaching at a lower point than the top of the plate (like the PIG PC), allowing for a higher plate placement than it's competitors.

The integral elastic straps allow for maximum comfort and expansion during heavy activity, and allows for the use of PIG Elastic Cummerbund Sleeves for additional Molle Load Carriage or Side Plate options.

The front and back plate assemblies on the PIG BRIG are ordered separately, allowing you to mix and match different size front and back plates. The plates are a shoehorn fit, and each PIG BRIG model is designed around a specific plate contour. Currently the BRIG is available for ESAPI (4 sizes), the 10" x 12" Tap Gamma and the Velocity Systems/LTC ICW 10" x 12" Plate. Other plate shapes will be offered in the future.

The Rear is available both SLICK and ALL-MOLLE. Browse the [SYSTEMA] category to see the various components you can add to this product family!

As with all PIG tactical nylon products, the Brig is Made in the USA. 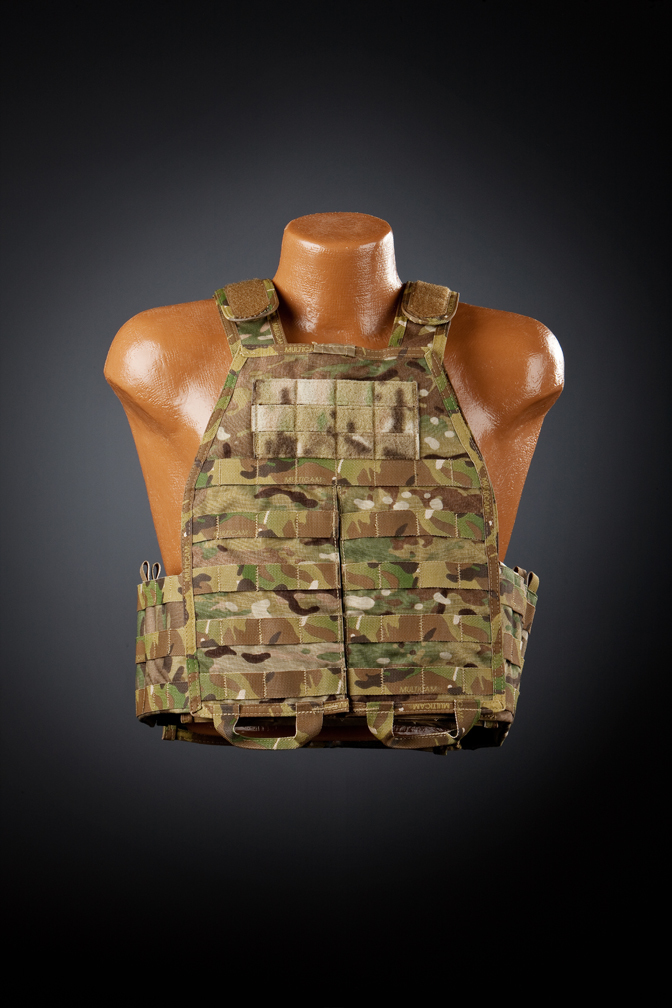 The world's first 100% modular armor carrier. Every piece (shoulder-straps, side straps, cummerbunds, etc.) is removable and replaceable, including the MOLLE panels!

Changing load-outs for different weapon systems and/or mission requirements can be easily accomplished now within a matter of seconds.

The lengths and angles of the individual pieces can also be adjusted to exact individual preference.

Developed explicitly for SOCOM, and now available to all qualified buyers.

Made in the USA.