While we’re on the subject of Russian firearms, we should perhaps also mention a pistol that looks really intriguing. It’s manufactured by KBP (Equipment manufacturing Design Bureau) in Tula, Russia, and it’s called the GSh-18. The KBP GSh-18 pistol basically appears to be a polymer-framed hybrid pistol that incorporates design and material aspects of previous pistols made by other manufacturers, albeit with numerous unique touches. For instance, the pistol’s grip is very Heckler & Koch (HK)-like in its appearance/profile (resembling an HK USP grip, particularly with the polymer type and side stippling), albeit with a more sensual, slender shape and longer profile (since it’s designed to house an 18-round 9x19mm mag). The GSh-18’s slide profile is Steyr M-A1-like, particularly at the rear (above the tang), giving the pistol an extremely low bore axis, even lower than the Glock 17 and Glock 19 pistols.

The pistol will fire any NATO-spec 9mm Parabellum ammo (9x19mm), but it’s designed specifically to utilize the 9mm PBP cartridge, which is a very hot AP (armor-piercing/armor-penetrating) version of the 9x19mm Parabellum in order to defeat body armor. This is inline with the Russians’… 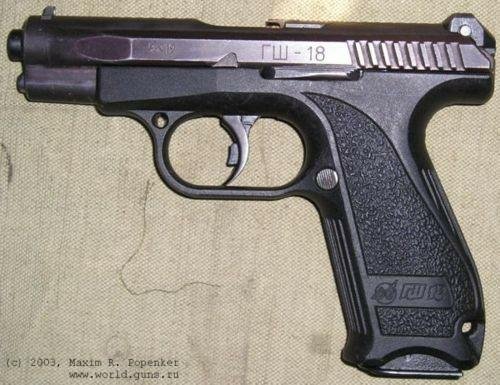 overall focus on body armor penetration capability, even with pistol and submachine gun ammo. This movement towards AP capability for subguns and even pistols seems to now be common with militaries and police forces around the world.

The KBP GSh-18 pistol is recoil-operated and operates via rotating barrel, which provides the lock-up.The pistol actually utilizes 10 locking lugs to accomplish this with a rotation angle of roughly 18 degrees. DefRev is guessing that this type of locking-unlocking mechanism (which looks very strong) is necessary due to the high pressures that are most-likely associated with the PBP cartridge. GSh-18 is striker-fired, like the HK P7 M8 and P7 M13 pistols and Glock pistols, and its trigger operates similarly to the Glock Safe-Action type. It even features a protruding trigger safety, just like the Glock, albeit with a different profile/configuration.

When the pistol is charged (chambered with a fresh round), the rear of the striker protrudes from the rear of the slide, a la the HK P7’s, for tactile and visual verification that the weapon is ready to fire. However, the GSh-18’s striker only protrudes about 1mm, which is less than the P7’s striker protrudes when cocked. The GSh-18 also apparently utilizes double-column magazine that transitions to single-column feed at the top for more reliable feeding, just like the P7 M13 mag.

According to Max Popenger’s GSh-18 pistol page, it’s possible that the pistol could have reliability issues, due to its unique open-front slide, which could possibly allow dirt and debris into the action. Here is what Popenger has to say about this aspect (The following has been corrected for grammar and improved readability.): 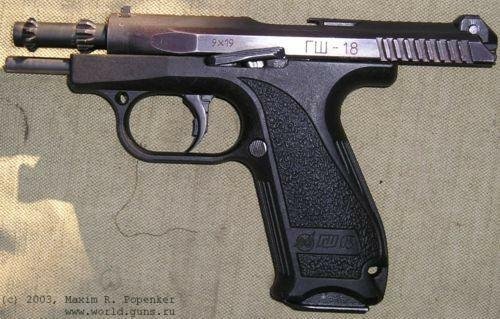 "One of the most discussed features of the GSh-18 is a slide that is open at the front. Critics [have] said that the dirt will easily go into the slide interior via this opening and pistol reliability will be decreased, at [the very] least. Designers said that [this] is ‘O.K.’ and dirt will not pass deep into the gun’s interior. [The pistol’s designers probably have good to say this], because GSh-18 successfully passed rigorous military trials, but only the future and actual field reports will tell us the full story."

DefenseReview is going to be keeping an eye on this pistol. We’d really like to get ahold of one for testing.

The images accompanying this article are courtesy of "Modern Firearms and Ammunition".

David Crane started publishing online in 2001. Since that time, governments, military organizations, Special Operators (i.e. professional trigger pullers), agencies, and civilian tactical shooters the world over have come to depend on Defense Review as the authoritative source of news and information on "the latest and greatest" in the field of military defense and tactical technology and hardware, including tactical firearms, ammunition, equipment, gear, and training.
Previous KBP Introduces the PP-2000 SMG/PDW for Close Quarters Battle (CQB) Applications
Next Hissatsu Knife for Military, Private Military Company (PMC), & SWAT Operators