DefenseReview recently received an email communication from Bill Pegler, CEO of Television Equipment Associates, Inc. (TEA), about an interesting tactical communications (a.ka. tactical comms) product that TEA is currently marketing. It’s called the RAPID 40 Field Telephone System and it was designed and developed specfically for tactical military communications (tactical military comms). According to Mr. Pegler, RAPID 40 is the first new field phone technology since World War II. Here’s what he wrote about it:

The following quoted passage has been slightly modified/edited for readability and clarity.

"Rapid 40 is the first new field phone technology since WWII. Until now, all field phones required a central switchboard (probably at HQ) which was operated 24/7. Separate and independent phone lines needed to be run from the switchboard to each communications point (each phone). [For example] if you wanted to operate 20 phones, you had to run a dedicated line to each one, which required lots of time and labor to achieve. However, with Rapid 40:…

* You "snake" only 1 line and run it through every place you might ever want comms….two guys in a jeep can achieve this in 30 minutes without breaking a sweat.

* You issue a Rapid 40 handset to each communicator. It’s similar in size and complexity to the phone on your desk. To communicate, the warfighter walks up to any point on the wire highway and latches on (takes 30 seconds), and he’s ready to talk with anyone who has latched onto the highway. All he has to do now is dial a 2 digit phone number, and they are talking.

* Need to transmit data? Just plug your laptop into the rapid 40 handset, and you’re done. 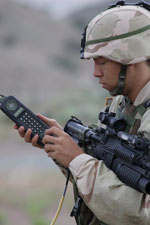 * Maybe you have only one very special fancy radio, but many people on your net might want to use it. So, get a Rapid 40 interface box and attach it to this radio. It then becomes just another instrument on the net. When someone wants to use that radio, he dials that extension. And that’s it–it’s done.

* So, you can have 10 simultaneous duplex phone calls and 3 conference calls plus data over only ONE 2-wire cable. And no, I don’t know how we do it!

* There are lots of other really cool features (but you might need to do some real work today) so I’ll only tell you about the "P" button: Say I’m a very senior person and I need to talk to you, only your busy talking to Shirley. So, when I dial you, I get a busy signal. But, as I am a senior person, I punch the special "P" button–Shirley is dropped, and I’m talking to you. It’s that fast and easy."

RAPID 40 is a rapidly deployable, multiplexed, automatic telephone system, based on a single length of ordinary field cable.

It is compatible with the RA525 Matel system, and incorporates system enhancements including extended range, a smaller handset, increased capacity, and a PC-based Management System. The RAPID_40 system uses intelligent handsets which can be quickly connected on to the field cable highway, with no requirement for a central switchboard or operator. Hence, no single point of system failure exists. The network may be up to 10km long using standard D10/WD1 field cable, which can be deployed from the back of a moving vehicle or using a hand reeling machine. A highway can accommodate up to 40 handsets, with provision for up to ten simultaneous private duplex conversations and three conference calls. Interfaces are available to facilitate connection to a magneto or CB switchboard, PSTN network, radio network or another RAPID_40 network. 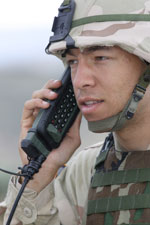 * Up to 40 voice and data subscribers

David Crane started publishing online in 2001. Since that time, governments, military organizations, Special Operators (i.e. professional trigger pullers), agencies, and civilian tactical shooters the world over have come to depend on Defense Review as the authoritative source of news and information on "the latest and greatest" in the field of military defense and tactical technology and hardware, including tactical firearms, ammunition, equipment, gear, and training.
Previous MSA Acquires Paraclete Armor and Equipment, Inc.
Next M16A5 Concept: A Modular, Multi-Caliber Rifle for Future Infantry Warfighters?