What do you get when you combine a (wheeled) manpackable mini-UGV (Unmanned Ground Vehicle) / ground robot with a flee-type (or grasshopper-type) jumping capability? You get the Precision Urban Hopper (PUH) jumping UGV. The Precision Urban Hopper, brought to you by the friendly folks at Sandia National Laboratories (SNL) and DARPA (Defense Advanced Research Projects Agency), weigs 6.5 lbs and is reminiscent of the USMC’s Dragon Runner mini UGV with respect to its appearance and ruggedness. However, it one-ups Dragon Runner with it’s ability to leap tall obstacles with a single bound. The PUH can supposedly jump as high as 25 feet. 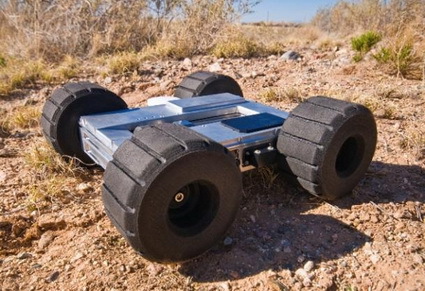 Wired Danger Room’s David Hambling writes that the Precision Urban Hopper’s jumping mechanism is like an “explosive pogo stick”. The mechanism “uses methyl acetylene-propadiene gas as fuel and nitrous oxide as an oxidizer, igniting the combination with a glow plug”, Hambling writes. Of course, Hambling neglects to explain what a glow plug is, so we had to look it up. According to Wikipedia, a glow plug is similar to a spark plug. It’s purpose is to ignite fuel in the very small internal combustion engines typically utilized by model aircraft. However, in the case of the electrically powered Precision Urban Hopper, the glow plug is just used to ignite the binary fuel inside the jumping mechanism.

According to Mark Peterson of DARPA, the Hopper’s three key developmental aspects are its hybrid rolling/hopping design, miniaturization, and high-precision valves. He told Danger Room the following: “With these improved valving technologies, researchers are now able to precisely meter fluid fuels and oxidizers into the piston systems, and accurately provide the needed energy to hop the vehicle to an exact spot.” Thus the “precision” moniker. 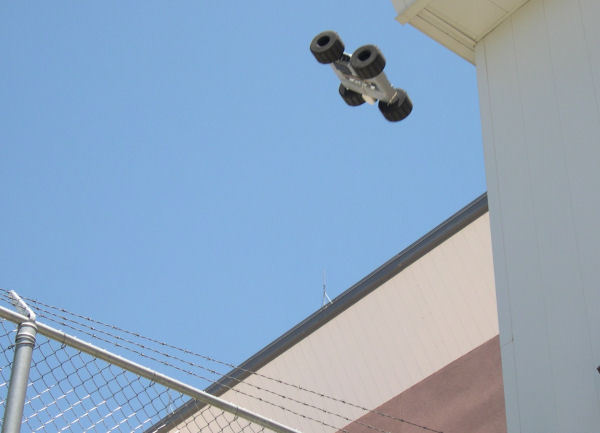 Hopping the PUH over a fence or onto a roof is one thing, but we’re skeptical about Hambling’s contention that it “can even pop through (open) windows”. We’ll believe that when we see it, since Hambling doesn’t explain how that is accomplished. Does the PUH’s camera have a reticle that the operator can place on a target spot and literally jump the robot to that spot? We don’t know, since Hambling doesn’t explain this. Also, will the jumping mechanism operate on both sides of the robot, or is it side-specific? In other words, does the robot have to right itself to one side, i.e. flip itself over before it can jump?

Whatever the case, the Precision Urban Hopper mini UGV/ground robot is interesting, but we’re curious as to why the folks at DARPA decided to go with wheels a la Dragon Runner instead of tracks a la iRobot PackBot and Foster-Miller Talon Robot/SWORDS. Perhaps it’s easier to jump a wheeled robot than a tracked robot for some reason? Is a tracked robot inherently heavier or not capable of handling the landing impact? Do tracks have too much ground friction for the onboard power supply? We don’t know.

A DARPA budget document states that the “surgical lethality and/or Intelligence, Surveillance, and Reconnaissance (ISR) to any point of the urban jungle while remaining lightweight, small and expendable.” Expendable, huh? I wouldn’t wanna’ be the guy who loses it. I’m not so sure the higher-ups will understand. Also, the robot’s pretty small, so unless you stick some C4 plastic explosive inside it (maybe line it with it?) and turn it into a remote-controlled mini robotic suicide/homicide bomber, we’re skeptical about it’s lethality. Remember, it’s small, weighs only 6.5 pounds, and has to be able to jump around. That severely curtails its lethal weapons payload capacity. More weight means it will require more battery and jumping power.

Click here to watch a quick video of the Precision Urban Hopper UGV hopping over a fence.

Click here to read more about the history of hopping robot development at Sandia National Laboratories.

Sandia’s been working on “hoppers” since 1997, thanks to Rush Robinett of Sandia’s Intelligent Systems and Robotics Center (ISRC). Robinett conceived of the jumping robot idea as he was catching grasshoppers to use as bait while on a fishing trip. “I noticed they jump around in a random fashion, hit the ground in an arbitrary orientation, right themselves, and jump again,” he says. “I said to myself: ‘I can make a robot do that.” So, I guess that answers my question several paragraphs up about whether or not the robot has to first right itself before jumping.