All photographic images contained in this article were taken by Chen Lee, and are the exclusive property of Chen Lee. Chen Lee owns the copyright on these photos.

Following the success of British SA80A2 project that HK did for British MoD, HK carried that momentum to the AR-15/M16 platform as the next logical choice. As soon as the HK416 (also written “HK 416”) hit the military market, it became a favorite combat platform for the elite of the elites, as well as a much desired weapon in the US civilian market, with street prices that reached an astronomical $5,000 for a complete barreled piston upper, HK recoil buffer and buffer spring.

Due to some political restraints, HK was unable to sell the HK416 on the US soil for the civilian market. This created a void for others to follow. 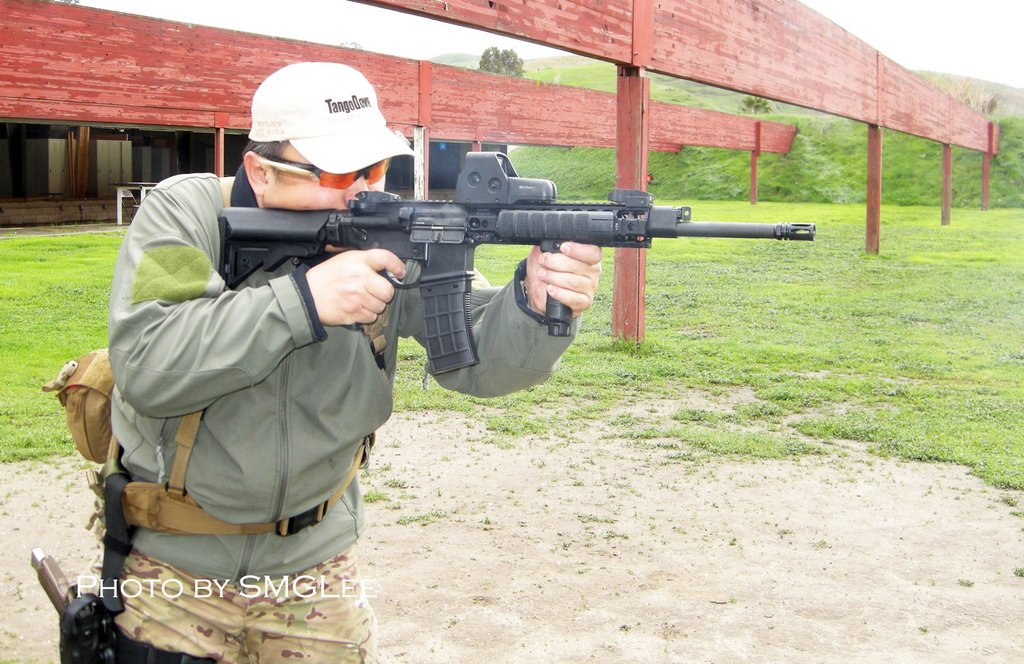 First into the fold was LWRCi a.k.a. LWRC, which has been one of the few successful piston systems that can match the HK 416 system in terms of performance and durability. Later, Patriot Ordnance Factory (POF) and others joined the fray, and a cottage industry of piston/op-rod AR-15 carbine/SBR (Short Barreled Rifle) and drop-in unit manufacturers thus rose to fill the new piston-driven AR craze. Out of all of these, so far, only those made by LWRCI, POF and newcomer Primary Weapons Systems (PWS) have proven to be viable systems.

This year, however, Lewis Machine & Tool (LMT) finally pushed out their long-under-development piston/op-rod system based on the their MRP (Monolithic Rail Platform) system. LMT has had a piston system from as far back as the SCAR (Special Operations Forces Combat Assault Rifle) solicitation, but due to production schedule/availability, timing, and LMT ‘s desire to come out with a system to topple the rest, delivery of the fully-developed MRP piston/op-rod system was delayed until now. 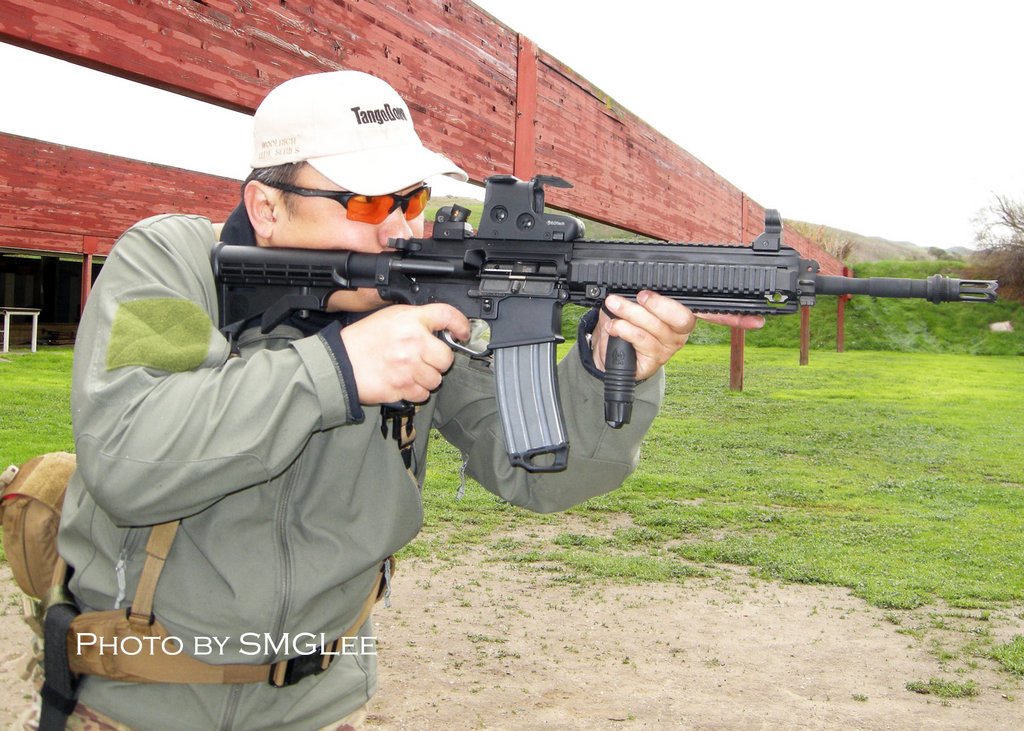 The standard direct-gas-impingement (DGI) LMT MRP system, with its quick change barrel and solid one-piece “monolithic” rail platform, has been the Ferrari of all direct-gas AR-15/M16/M4/M4A1 platforms since it’s introduction. The new LMT MRP piston-driven system is the same for piston-driven AR systems. Most of the piston-driven systems on the market, including the HK416, have much different recoil impulses than the direct-gas guns. The felt-recoil impulse of a piston-system AR carbine/SBR manifests itself as a sharper jolt to the shooter. The HK 416’s recoil impulse is therefore not as smooth or as soft as the direct-gas guns. However, for reliability, there is no matching the capability of the HK416. The LMT MRP piston gun, on the other hand, is about as smooth and as soft-recoiling as a direct gas gun. Compared to the HK 416, the LMT piston system’s recoil impulse is far more like that of the direct gas guns than anything I have shot recently, including the LWRC, POF, and PWS systems. 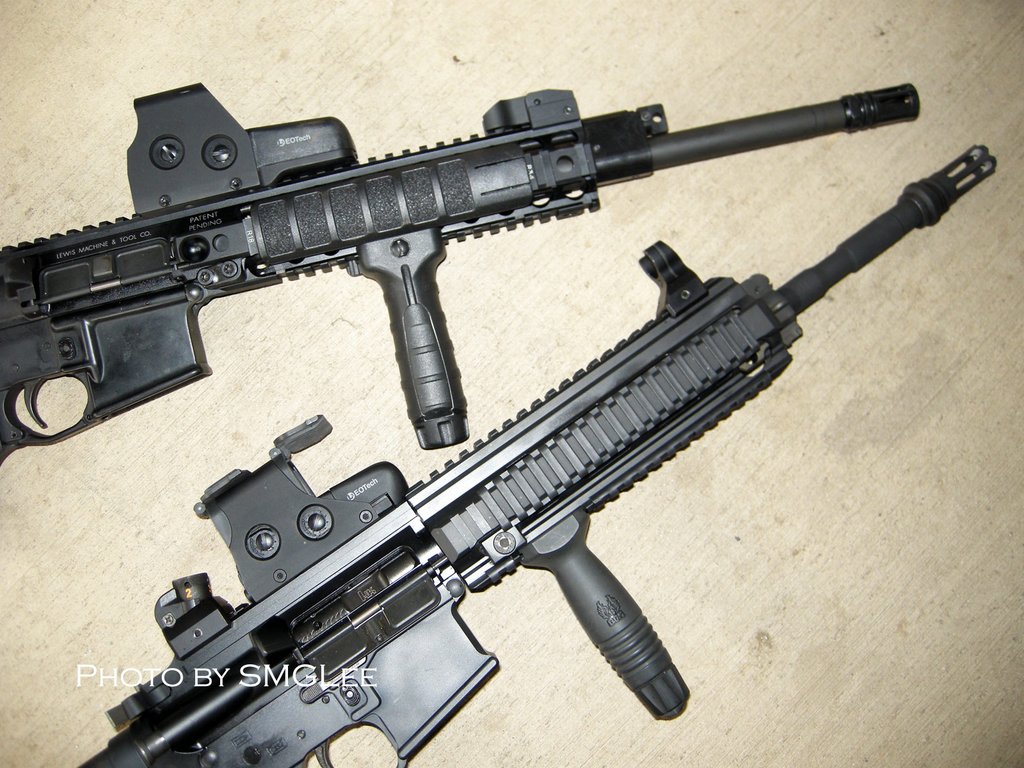 We set up the LMT piston system with an EOTech 556 HWS, Midwest Industries flip-up front and rear SPLP sight (BUIS), and TangoDown rail panels and vertical foregrip. The host lower has a H2 buffer with standard recoil spring. All testing was shot using the latest in magazine technology: the new TangoDown ARC polymer magazine.

The accuracy of the piston-driven MRP is also on par with the hammer-forged barrel on the HK416. We shot prone from 100 yards, using a Leupold Mark 4 MR/T 2.5-8X36 scope with illuminated mil-dot mounted to an American Defense Manufacturing 30mm quick detachable mount. Both guns shot a 1-2 MOA group with Hornady 75gr TAP 5.56mm ammo, and about 2-3 MOA with Lake City M855 ball and M193 ammo. We also ran Wolf steel-cased ammo, but that ammo was more for reliability testing than actual accuracy. The numbers posted by the LMT MRP piston/op-rod gun are on par with any combat carbine currently fielded. I believe that if I’d used a match trigger for the testing, the accuracy results would have been slightly better. 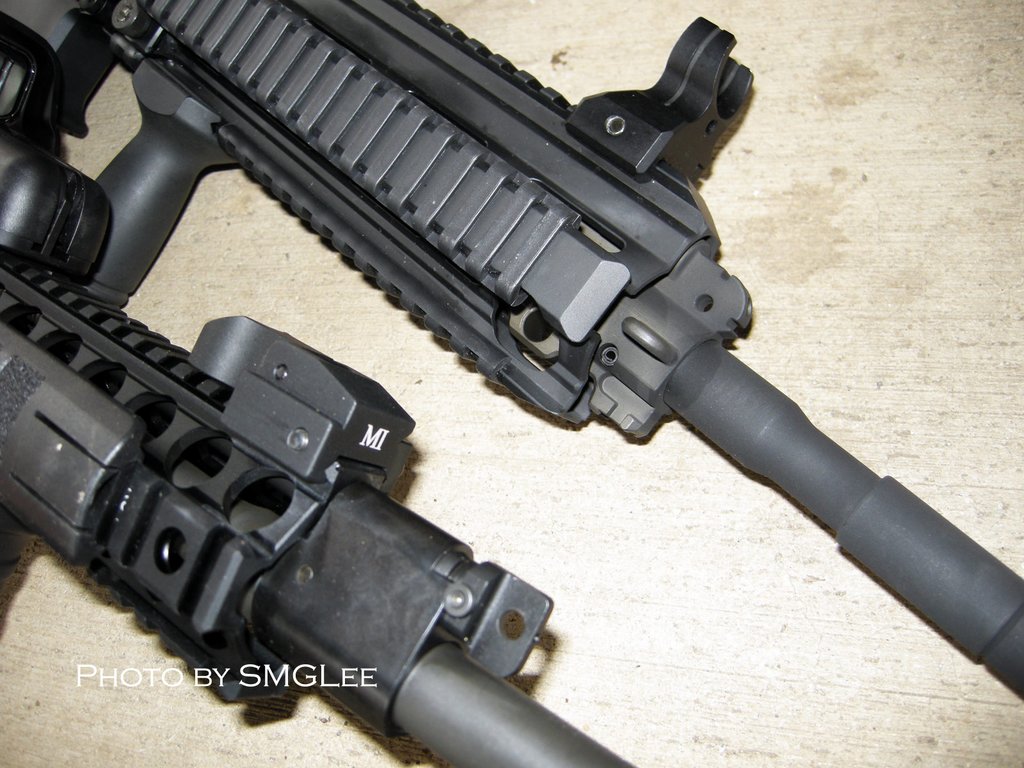 As far as reliability goes, the HK has proven itself time and time again on the battlefield; can the LMT match its performance? As the HK416 is already a proven system, we concentrated on the MRP piston system. We shot 500 rounds of Wolf, 500 rounds of M193 and 500 rounds of M855, plus a variety of reloads and factory ammo that we acquired from various shooters at the training session that day. When all was said and done, the total round count came to approximately 2,000 rounds. The LMT piston gun ran flawlessly, and the internals only required a simple wipe-down to clean them. However, due to the Wolf ammo, we had to scrub the throat, chamber and bolt head to get rid of the red sealant common on the Wolf ammo. 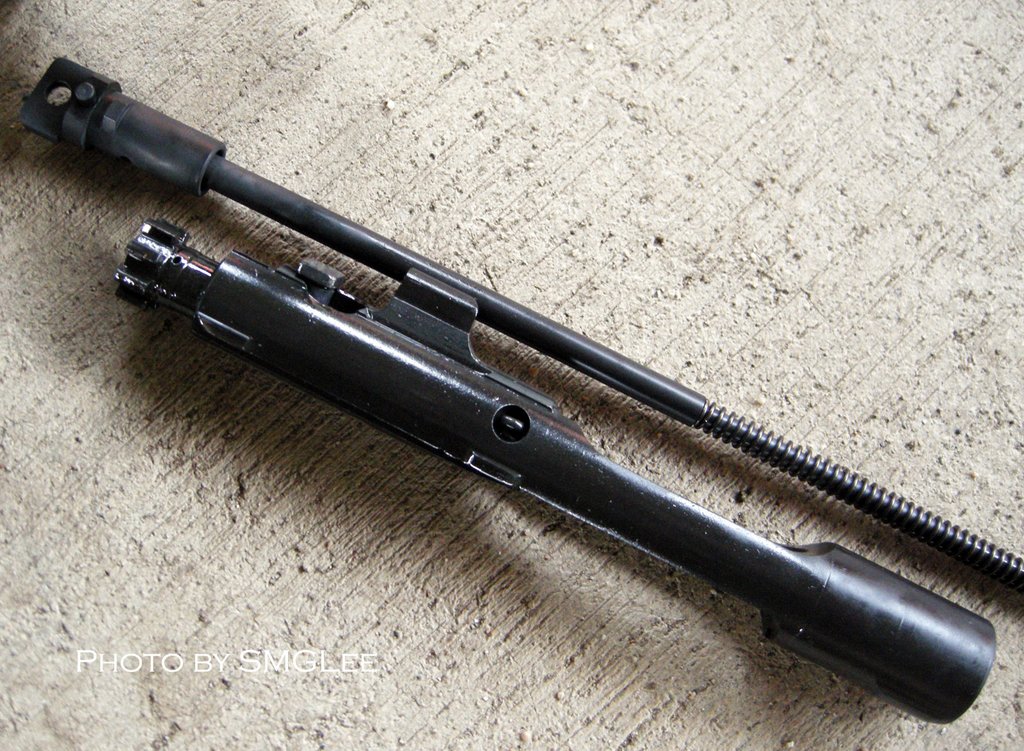 The HK 416 utilizes a lot of proprietary components, including the barrel, barrel nut, bolt, bolt carrier, and firing pin. None of these are interchangeable with direct gas ARs, and you have to run the HK buffer and spring in order to keep the recoil impulse in check. But with the MRP, you actually have more commonality of parts with the DGI guns than the HK416 enjoys. With the LMT MRP piston gun, you can still run the standard bolt and firing pins, which are some of the more commonly replaced parts in the AR system. With the HK weapon, you would have to pay a high price for the proprietary HK armorer’s tool just to remove the barrel. With the LMT, you just need to loosen the two torque screws that keep the barrel secured in the monolithic rail platform. For those of us that are not on a government budget, the MRP is definitely a lot easier/less expensive to service than the HK416. 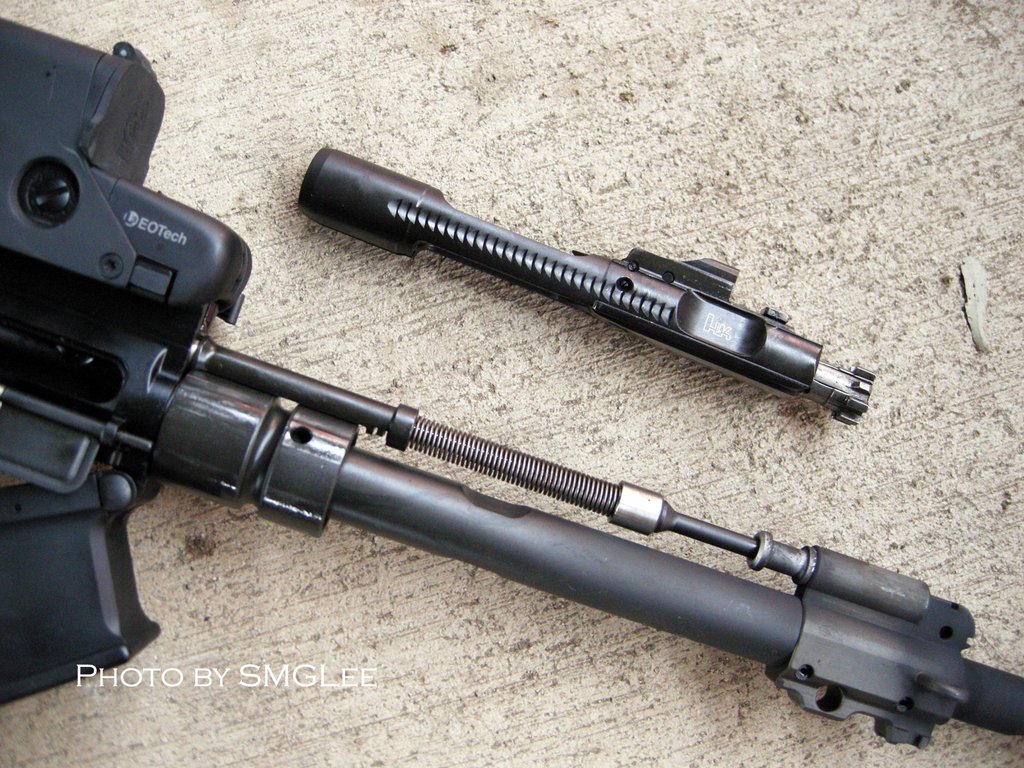 The HK piston system is a top-loading system. While the rail system on the HK 416 is supposed to return to zero, a lot of operators I spoke with never like to remove the rail to clean the piston, since re-zeroing the PEQ15 is a very time-consuming task. By contrast, the LMT MRP piston system is a front-loading system. All parts are easily accessed by removing the front gas regulator plug, so you don’t have to remove the rail system to access the piston and op-rod. The plug is adjustable for standard fire and suppressed fire. This is a major plus for those that run suppressed guns.

We had the opportunity to run both systems (HK416 and LMT MRP piston) with the excellent AAC M4-2000 muzzle can (silencer/sound suppresor), and the result was interesting. A suppressed piston system is naturally much louder than a suppressed direct-gas gun due to the gas regulator releasing excess gas. The LMT MRP shot slightly quieter than the HK 416. We measured the sound output with a studio-quality sound meter placed at the shooter’s left ear. The HK piston system shot approximately 1.5dB higher than a DI (Direct-Impingement) gas gun, but with the LMT, the sound suppression came within 1 dB of the DI gas gun. Both guns ran higher cyclic rates of fire when suppressed, but still ran slower than a Colt M4 suppressed. 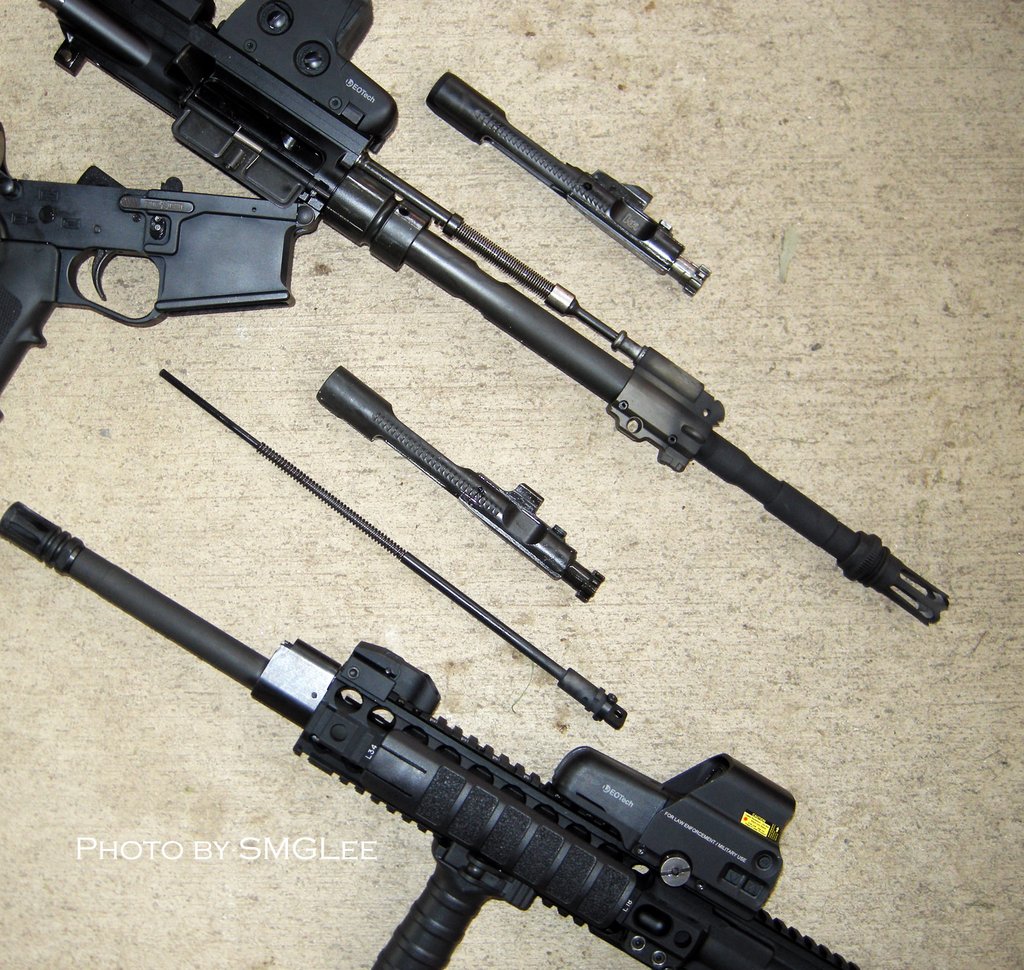 The LMT MRP piston system’s weight is on par with the HK416, which is heavy compared to a direct-gas M4/M4A1 Carbine, but you pay the price of extra weight to gain the ultimate reliability in an AR system. With the LMT MRP piston system, you have a platform (so far) that is just as reliable as the HK416, but costs half as much (street price for the LMT is $1400 vs. $4000 for the HK416), has less recoil, shoots smoother, and has more commonality of parts than the HK 416. The only remaining question is how reliable is the LMT MRP piston system design? This will require more than just the 2000 rounds I shot in a day. I will have to keep this gem and run a lot more rounds through it. To that end, I plan on taking this gun with me to Larry Vickers’ carbine class in South Hill, Virginia in a month’s time. 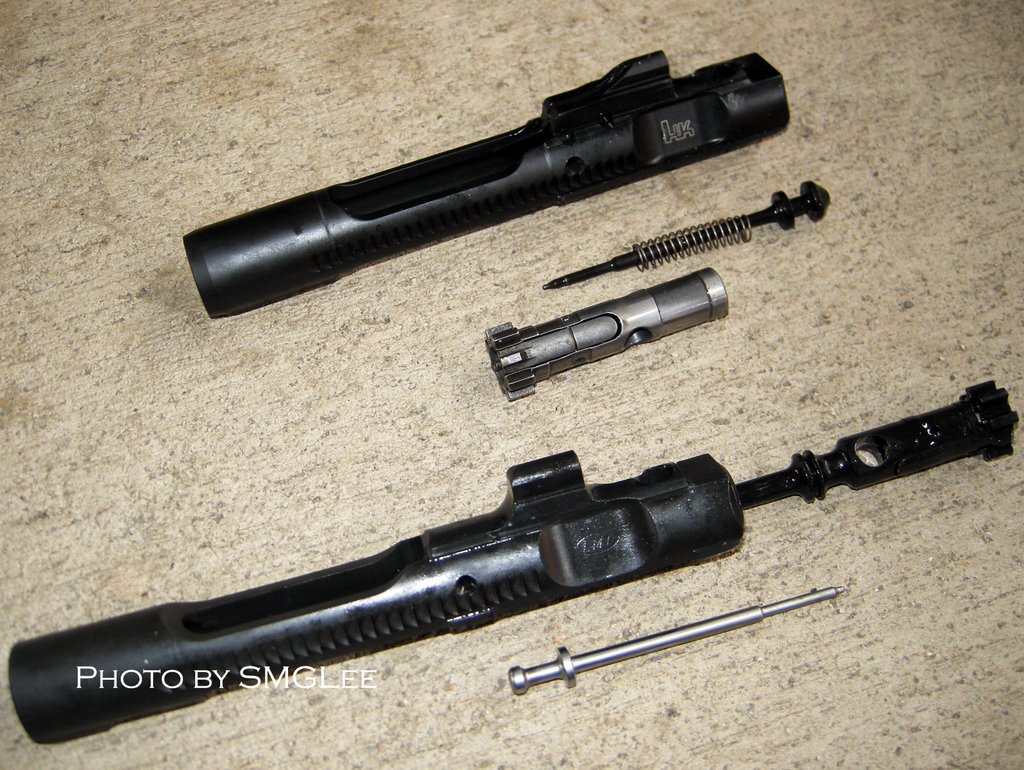