The following content was provided to DefenseReview by Defense Update, which is a Defense Review content partner. The article has been slightly modified from its original form, and additional links and information have been provided (below):

In Eurosatory 2006, Israel Military Industries Ltd. (IMI) is unveiling its new Active Defense System (ADS) called – Iron Fist. Until recently, the development of Iron Fist was shrouded in secrecy, as it was developed in parallel to a different Israeli developed ADS system – RAFAEL’s Trophy Active Protection System (APS), a.k.a. Trophy Active Defense System (ADS), which entered full scale development in 2005. However, due to rapid development pace and successful testing, IMI expects to deliver the first systems for IDF testing and qualifications by mid 2007. Unlike competing systems, IMI’s Iron Fist can be installed on light vehicles, including trucks and even Humvees, offering effective protection from rocket-propelled grenades, a.k.a. RPGs (RPG-7/RPG-7V/RPG-7VR). IMI conducted extensive testing against a full spectrum of threats, engaging various types of threats from stationary and moving armored personnel carriers. The system already…

An Iron-Fist APS anti-missile/anti-RPG interceptor shown during an intercept with an RPG. Iron-Fist can also defeat kinetic energy (KE) rounds by destabilizing them and reduce their penetration capability.The system uses a fixed radar sensor, mounted on the protected platform, to detect potential threats, measure distance and trajectory, providing the fire control system with data for calculates engagement plans. When a threat is identified as imminent, an explosive projectile interceptor is launched toward it.

The interceptor, shaped similar to a small mortar bomb, is designed to defeat the threat even when flying in very close proximity. Unlike other systems, the Iron Fist uses only the blast effect to defeat the threat, crushing the soft components of a shaped charge or deflecting and destabilizing the missile or kinetic rod in their flight. The interceptor is made of combustible envelope, fully consumed in the explosion. Without the risk of shrapnel, Iron Fist provides an effective, close-in protection for vehicles operating in dense, urban environment. The use of close proximity, rather than "hit to kill" mechanism avoids complex interception techniques and contributes to reduced cost. 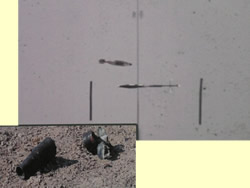 One of the main advantages of the Iron Fist Active Protection System (APS) is its integration into routine operations. Its sensor provides essential input to situational awareness systems, based on ground radar surveillance, moving target detection, classification and tracking and motion detection. Furthermore, by loading other types of projectiles, such ass non lethal, anti-personnel, smoke or illumination, the system can be used in support of routine operation.
Iron Fist is supported by Israel’s MOD Defense Research & Development Directorate (DRDD). The program is designed to protect medium and light vehicles, but based on its performance, has the potential to be fielded on heavy armor as well. In future configurations, the system has a growth potential to protect sensitive elements of fixed installations or patrol boats, protecting from RPG attacks, frequently encountered in counter insurgency operations.
Israel Military Industries (IMI) can be contacted by phone at +972-3548-5617, by fax at +972-3548-6125, and by email at [email protected].
Click here to visit the Defense Update homepage.
The following is an IMI press release announcing the debut of Iron Fist at Eurosatory 2006:
"5/24/06
Israel Military Industries Ltd. (IMI)
Cordially invites you to visit us at the
EUROSATORY 2006
IMI will present its products & capabilities in the main fields of:
Survivability & Protection for the Individual Soldier, Armor Fighting Vehicles and Helicopters. ”IRON FIST”- an Active Protection System for AFV’s will be presented for the first time
Fire power for the modern Warrior, MBT’s, Light & Heavy Artillery including 2 new families of advanced ammunition – for 120mm MBT’s & 105mm Howitzer for rapid deployment forces
Highly Accurate Artillery Rockets which enables improved precision by using advanced Trajectory Correcting System.
Israeli pavilion Hall 6, F39
Parc d’ expositions de Paris Nord Villepinte"
Additional Links:
IMI unveils Iron Fist APS (Jane’s Defence Weekly)
Iron Fist Active Protection System (APS) for Armored Fighting Vehicles (AFV) by David Crane