All digital photos of the HK416 Enhanced Carbine at International SOF Week/APBI below were taken by, and are the exclusive property of, DefenseReview.com. Click on photos below to view them full-size.
July 15, 2005

It’s rumored that the HK416 is already in use in SOF circles, and end-users like the weapon (unconfirmed/unverified).  Again, this is just a rumor that we’ve heard.  However, if it’s true, it would not be beyond the realm of reason, since a retired U.S. Army Special Forces operator assisted in developing the HK 416. As an M4/M4A1-config short-stroke gas piston carbine/subcarbine, the HK416 joins the ranks of carbines/subcarbines like the… 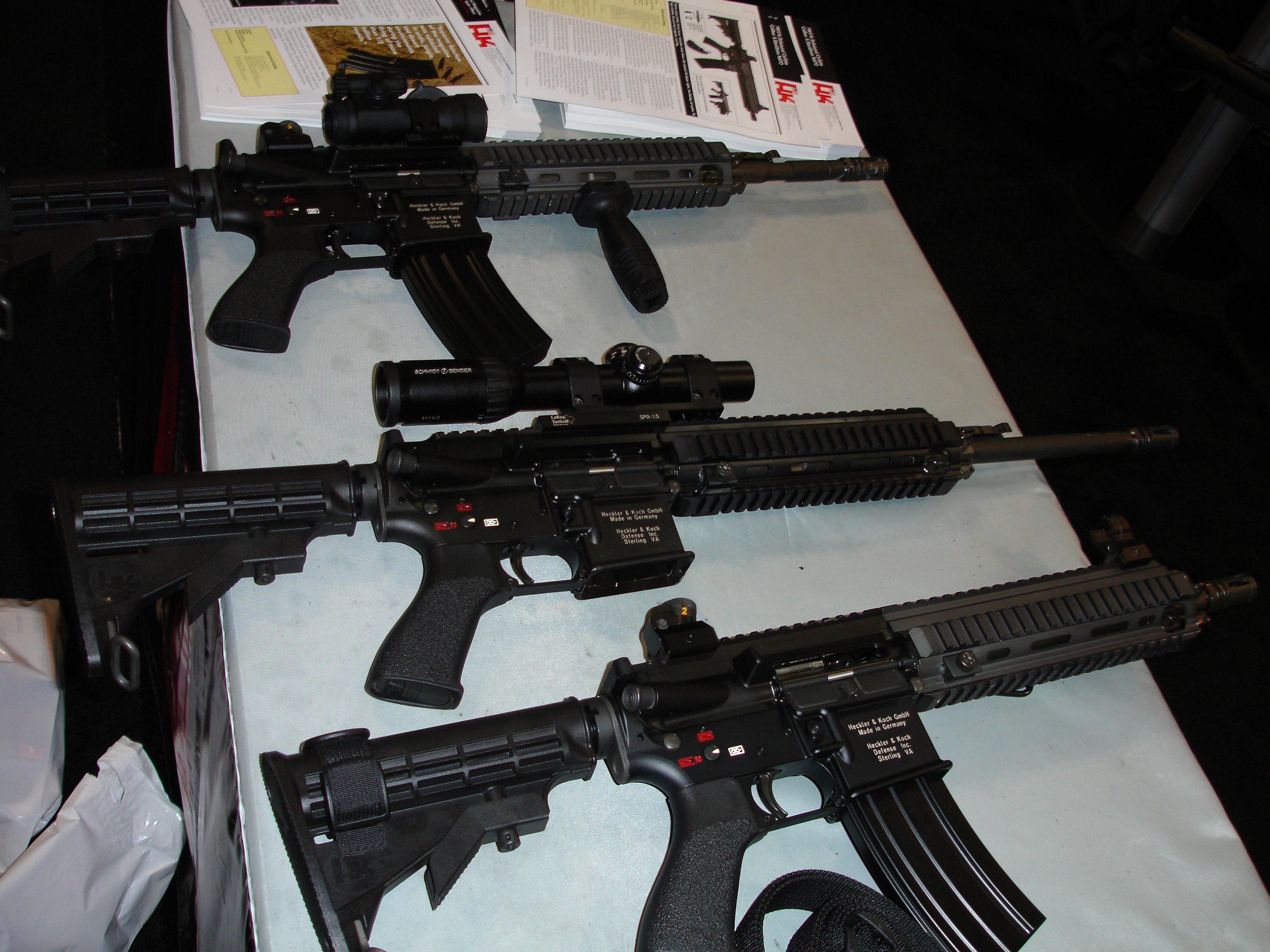 Which one of these is the best? We don’t know, yet. Somebody would have to peform a side-by-side adverse conditions/high-round-count test on all of them. However, all of the inside info DefenseReview has heard so far on the HK 416 has been positive. It’s DefRev’s understanding that the HK416 is a runner (it’s reportedly reliable), although we haven’t yet gotten a chance to see any definitive testing data, nor have we had the opportunity to run the weapon at the range. It’s possible that the HK416 and FN SCAR-L will end up vying for Special Operations Forces Use, particularly with U.S. Army Special Forces. We don’t know. We’ll see.

So our readers are aware, it’s also rumored that HK is developing, or has developed, a 7.62x51mm version piston driven carbine/subcarbine (short-stroke gas piston) to accompany the HK 416.  It’s called the HK417, but we’re not sure if this information is correct.  Again, this 7.62x51mm version is just an unconfirmed/unverified rumor, at this point.  If true, however, this would create an HK416 (5.56mm)/HK417 (7.62mm) small arms family, which could conceivably compete with the FN SCAR-L (SCAR-Light)/SCAR-H (SCAR-Heavy) family for a SOCOM contract (or other military contracts) and/or foreign government/military contracts.  It would also most likely compete in domestic and foreign law enforcement markets.  Regarding USSOCOM and U.S. military general infantry procurement contracts, specfically FNH USA would most likely enjoy a significant advantage, since FNH USA already supplies the U.S. military with virtually all of its current assault rifles and machine guns–M16A3/A4 assault rifles, M249 SAW’s (5.56x45mm), and M240B/G GPMG’s (7.62x51mm)–and the FN SCAR family recently won SOCOM’s very own Special Operations Forces Combat Assault Rifle (SCAR) competition.  The only advantage HK Defense would appear to enjoy would be the fact that the HK416 (and HK417), is ergonomically the same as the Colt SOPMOD M4/M4A1 Carbine, so it could be argued that less retraining would be required.  Then again, we are talking about highly-skilled SPECOPS end-users (at least the first contracts), so the retraining issue for the FN SCAR family shouldn’t be much of an issue, unless the FN SCAR series were to go military-wide (U.S. Army and Marine Corps general infantry).  It will be interesting to watch how things develop with both the HK 416/HK 417 and FN SCAR-L/SCAR-H families.

In the meantime, DefenseReview would very much like to get an HK416 and a whole bunch HK High-Reliability 30-Round Steel Mags out to the range for some T&E.

Below are some more HK416 pics from International SOF Week/APBI and hi-res scans of the HK416 Enhanced Carbine Caliber 5.56x45mm NATO Fact Sheet/Spec-Sheet and HK High-Reliability 30-Round Steel Magazine Fact Sheet/Spec-Sheet, below. The HK High-Reliability 30-Round Steel Magazine was designed for use not only in the HK 416, but also as a replacement magazine for any AR-15/M16, M4/M4A1 Carbine, or SA80 type rifle. 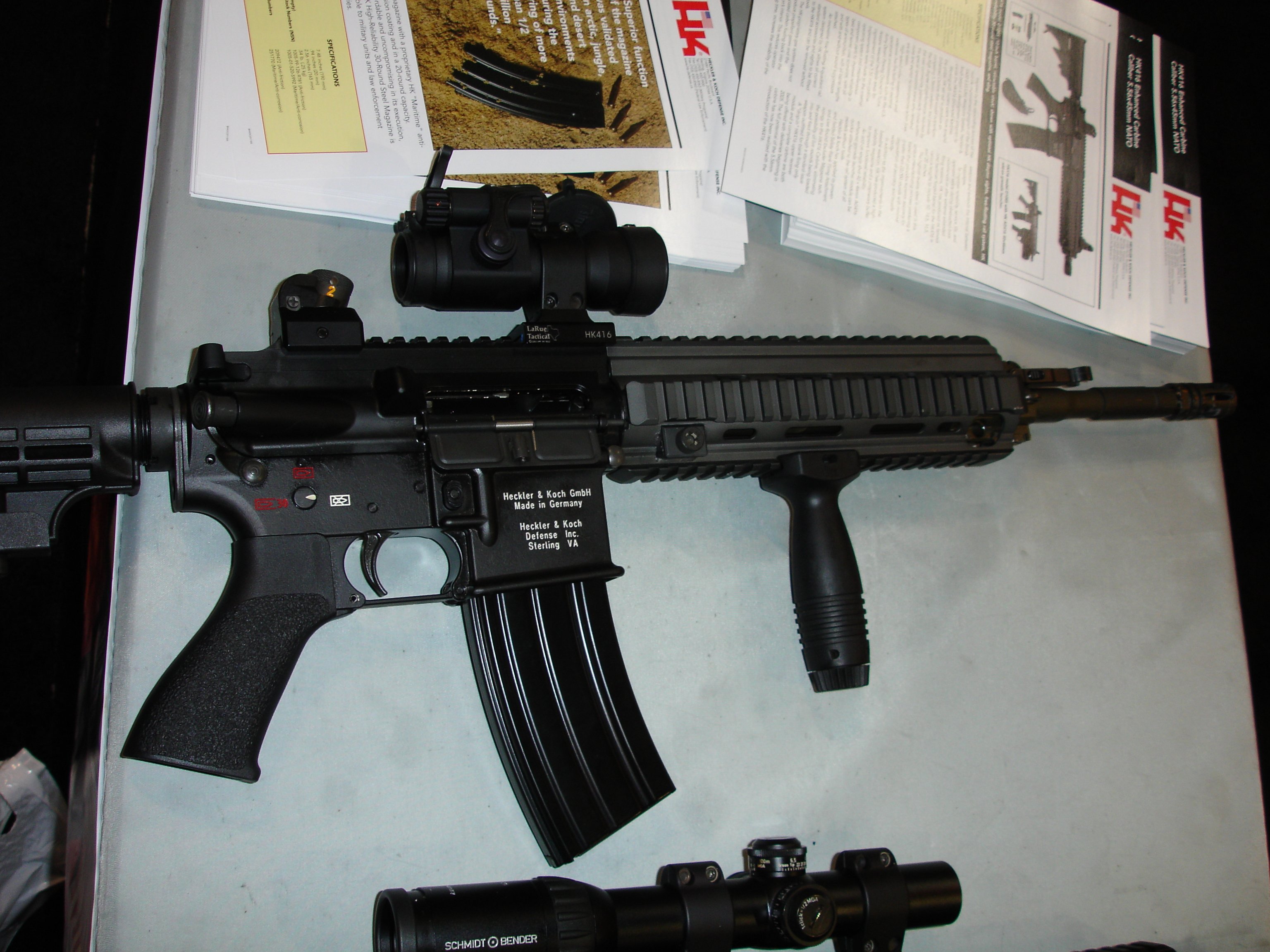 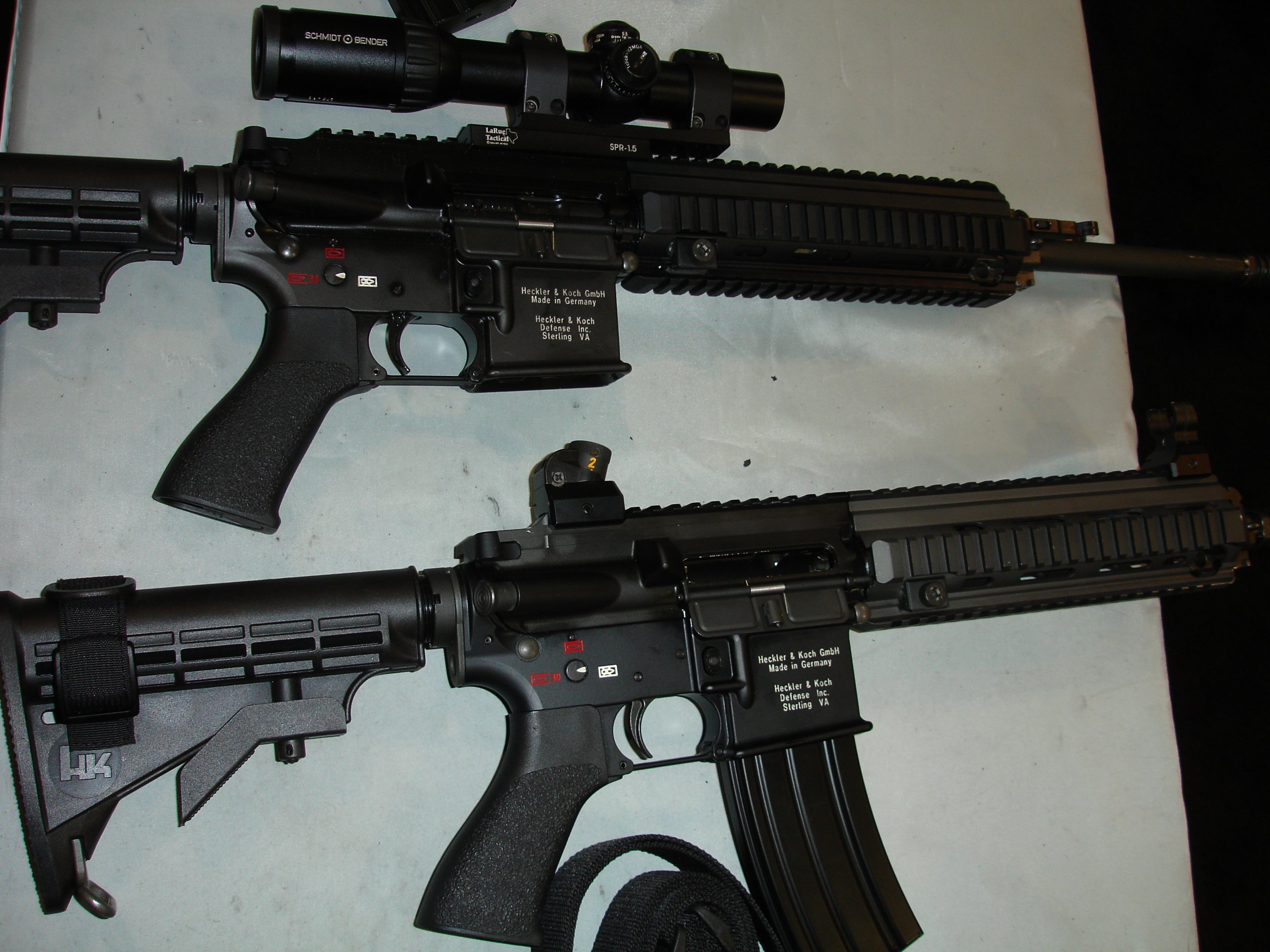 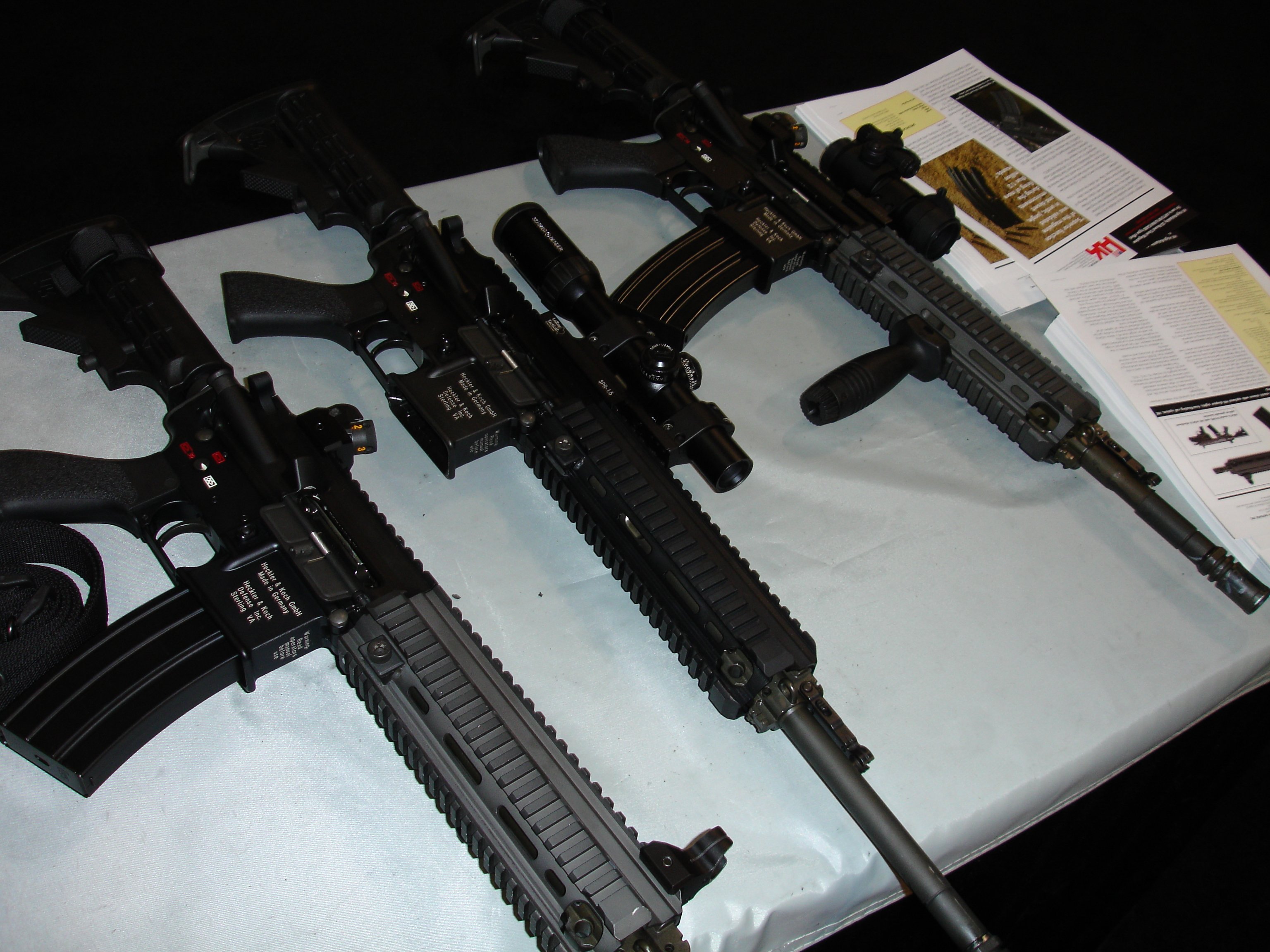 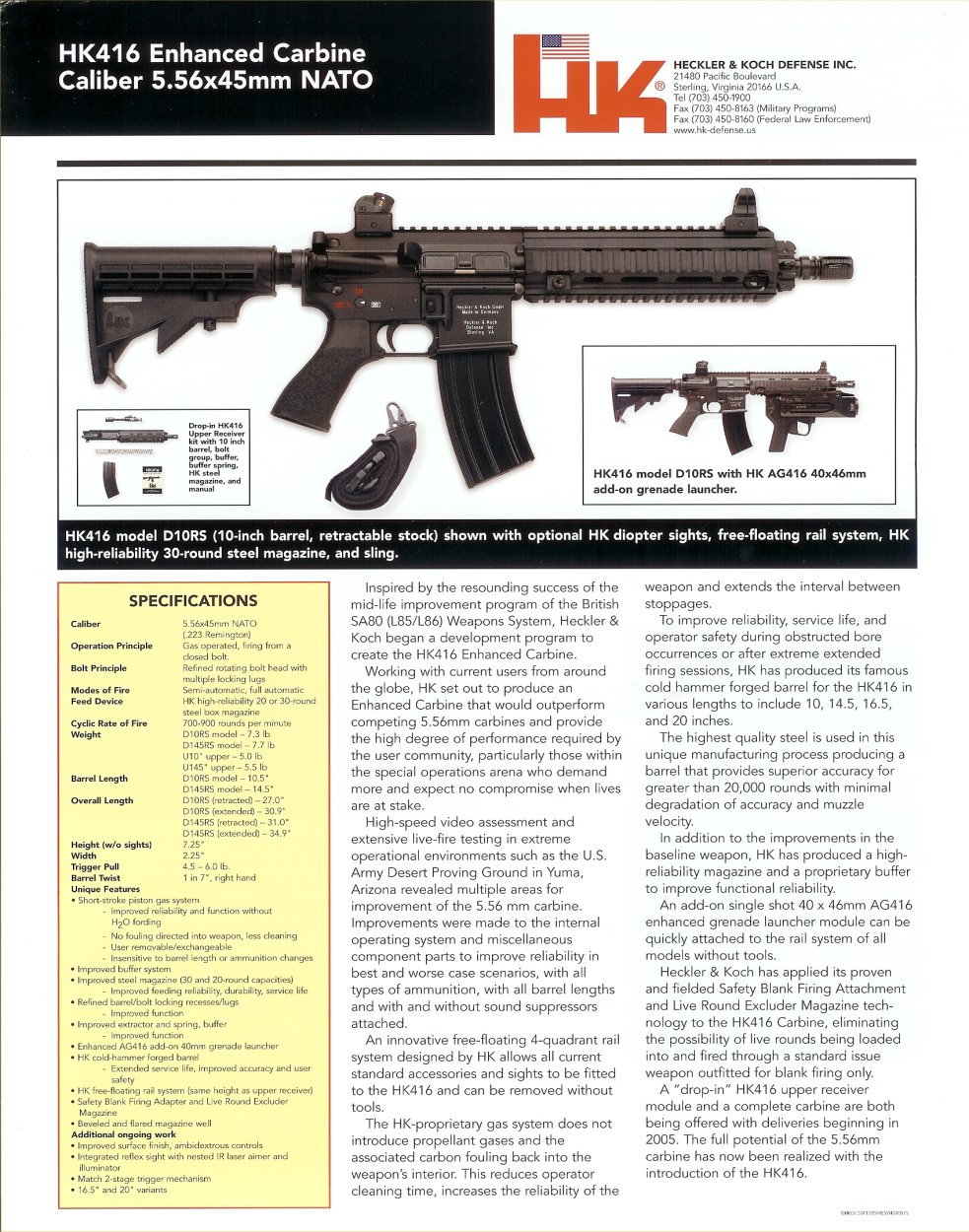 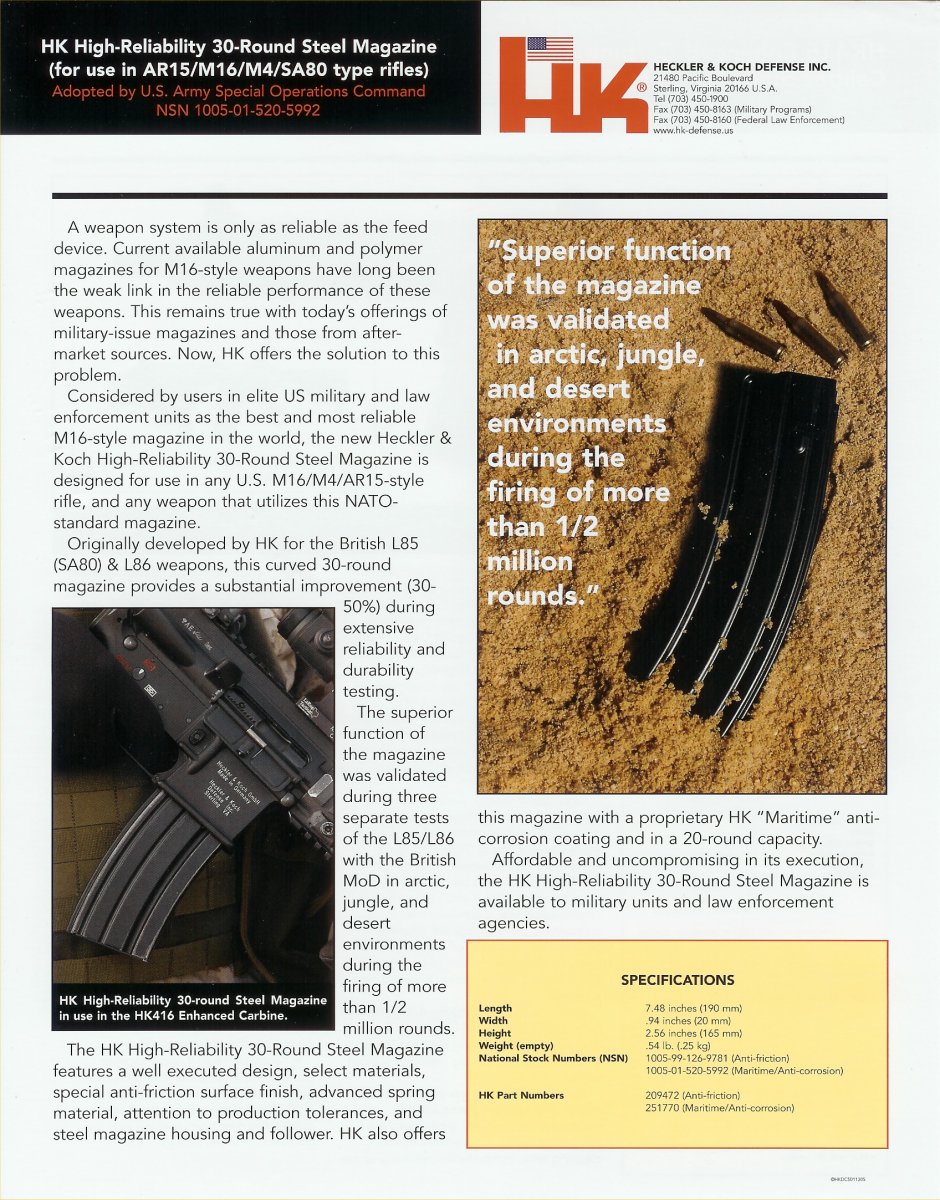 Click here to view a larger version of the HK High-Reliability 30-Round Steel Magazine Fact sheet above. This larger version of the document might be easier to read for some.
If you’d like to inquire more about or purchase HK416 Enhanced Carbines and/or HK High-Reliability 30-Round Steel Mags for your unit/team, agency, or department, you can contact Heckler & Koch Defense, Inc. (HK Defense, Inc.) by phone at 703-450-1900. Ask for Jim Schatz or Philip de Garis (Ext. 238).

Here’s what Heckler & Koch Defense Inc. (HK Defense Inc.) has to say about the HK416 Enhanced Carbine (from the HK Defense website):

Inspired by the resounding success of the mid-life improvement program of the British SA80 (L85/L86) Weapons System, Heckler & Koch began a development program to create the HK416 Enhanced Carbine. Working with current users from around the globe, HK set out to produce an Enhanced Carbine that would outperform competing 5.56mm carbines and provide the high degree of performance required by the user community, particularly those within the special operations arena who demand more and expect no compromise when lives are at stake.

High-speed video assessment and extensive live-fire testing in extreme operational environments such as the U.S. Army Desert Proving Ground in Yuma, Arizona revealed multiple areas for improvement of the 5.56 mm carbine. Improvements were made to the internal operating system and miscellaneous component parts to improve reliability in best and worse case scenarios, with all types of ammunition, with all barrel lengths and with and without sound suppressors attached.

An innovative free-floating 4-quadrant rail system designed by HK allows all current standard accessories and sights to be fitted to the HK416 and can be removed without tools. The HK-proprietary gas system does not introduce propellant gases and the associated carbon fouling back into the weapon’s interior. This reduces operator cleaning time, increases the reliability of the weapon and extends the interval between stoppages.

To improve reliability, service life, and operator safety during obstructed bore occurrences or after extreme extended firing sessions, HK has produced its famous cold hammer forged barrel for the HK416 in various lengths to include 10, 14.5, 16.5, and 20 inches.

The highest quality steel is used in this unique manufacturing process producing a barrel that provides superior accuracy for greater than 20,000 rounds with minimal degradation of accuracy and muzzle velocity.
In addition to the improvements in the baseline weapon, HK has produced a high reliability magazine and a proprietary buffer to improve functional reliability.

An add-on single shot 40 x 46mm AG416 enhanced grenade launcher module can be quickly attached to the rail system of all models without tools.
Heckler & Koch has applied its proven and fielded Safety Blank Firing Attachment and Live Round Excluder Magazine technology to the HK416 Carbine, eliminating the possibility of live rounds being loaded into and fired through a standard issue weapon outfitted for blank firing only.

A “drop-in” HK416 upper receiver module and a complete carbine are both
being offered with deliveries beginning in February 2005. The full potential of the 5.56mm carbine has now been realized with the introduction of the HK416.

David Crane started publishing online in 2001. Since that time, governments, military organizations, Special Operators (i.e. professional trigger pullers), agencies, and civilian tactical shooters the world over have come to depend on Defense Review as the authoritative source of news and information on "the latest and greatest" in the field of military defense and tactical technology and hardware, including tactical firearms, ammunition, equipment, gear, and training.
Previous Soldier Technology 2005: eMagin Heads-Up Display for the Future Warfighter
Next See-Through-Wall Radar and Vehicle-Disabling Microwave Tech for Mil/LE Apps