MIT materials science and engineering researchers are studying the flexible biological scalar armor system a.k.a. flexible dermal armor system utilized by Polypterus senegalus a.k.a. Senegal bichir a.k.a. Gray bichir a.k.a. "dinosaur eel", a "living fossil" fish, for its potential applicability for developing more advanced military body armor, vehicle armor (vehicular armor), etc. The eel's overlapping armored scales reportedly "first dissipate the energy of a strike, then protect against any penetration to the soft tissues below and finally limit any damage to the shield to the immediate area surrounding the assault", according to an AFP article.

This unique fish scale body armor simultaneously dissipates the energy of the bite and prevents actual tooth penetration, thus attenuating/mitigating (i.e. reducing) trauma to the animal from a bite. This is accomplished via… 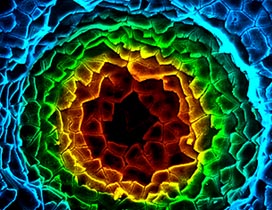 a multi-layered flexible scalar armor system. The eel has four layers of armored scales, and each scale is approximately 500 millionths of a meter thick. The MIT researchers believe the dermal scales' different composite materials and the geometry and thickness of the various layers all contribute the the armor's efficacy in protecting the animal. The 3-dimensional structural design of the overlapping scale layers, described by the MIT scientists as "fascinating, complex and multiscale," plays an important role, and "holds great potential for the development of improved biologically-inspired structural materials," says Christine Ortiz, an MIT associate professor in materials science and engineering.

The key will be applying the design principles of the dinosaur eel's flexible biological scalar armor system a.k.a. dermal armor system to developing biomimetic human armor systems. If only someone were already manufacturing a flexible synthetic scalar body armor system for human beings. If so, those MIT scientists could collaborate with them to see if that flexible scalar armor could be modified/enhanced to incorporate the structural design of Polypterus senegalus' dermal armor. Wait a second, that's right, there is! Oh, and we've been writing about it for years.

It's called Dragon Skin, and its manufacured by Pinnacle Armor, Inc. out of Fresno, CA. Dragon skin already utilizes a fish-like flexible scalar armor system with overlapping ceramic discs that dissipates energy by spreading the impact over a much larger surface area, prevents penetrations, and mitigates damage to both the surrounding "scales" and the wearer/user, just like Polypterus senegalus' dermal armor. Dragon skin just does it using less layers, and with synthetic ceramic discs instead of biological/natural scales.

There's just one potential problem with an MIT DMSE/ISN/Pinnacle Armor collaberation: U.S. Army PEO Soldier has launched a veritable jihad against Pinnacle Armor after its CEO, Murray Neal protested the Army's Safety of Use Message (SOUM) and allegedly biased/unfair and perhaps even rigged First Article Testing (FAT) of Pinnacle's SOV-3000 Level IV Dragon Skin body armor panels at H.P. White labs in May, 2006, and it's Defense Review's understanding at present that the U.S. Army/DoD funds most if not all of MIT ISN's R&D efforts and activities in general. Understand that Neal even testified on the Hill (i.e. before Congress) about it (and got a real grilling for it). This did not make the Army very happy. Defense Watch recently published an informative article/report on the latter, and Defense Review reprinted it. Because of his (Neal's), insolence, the Army decided to punish him/Pinnacle by launching a Shermanesque campaign against Pinnacle Armor that included a U.S. Marine Corps (USMC) MARADMIN/SOUM, U.S. Air Force debarment, DOJ/NIJ decertification, and rumored foreign export/ITAR restrictions (unconfirmed/unverified), essentially in an effort to destroy/kill all business avenues for Pinnacle Armor, which would appear to give Pinnacle Armor a classic restraint-of-trade case against the U.S. Army/DoD, particularly if there is evidence that the elements of the Army influenced the Marines, Air Force, DOJ/NIJ, etc. into taking the subsequent action they did. Pinnacle may want to consider hiring a good Washington, D.C. law firm to represent them in just such an action (restraint of trade lawsuit) against the Army.

Either way, it's DefenseReview's opinion that if the MIT materials science and engineering team really believes creating a synthetic, biomimetic body armor system for humans based on the dinosaur eel's dermal armor is a viable project, they should seriously consider collaborating with Neal/Pinnacle Armor on it. After all, if you're trying to develop a synthetic scalar flexible body armor system that mimics the dinosaur eel's natural body armor (biologic body armor), and Pinnacle is the only company that has any experience whatsoever in successfully manufacturing/producing an effective and relatively lightweight flexible scalar body armor system (anti-rifle body armor system) for human beings (and specifically for military applications), wouldn't you want to work with Pinnacle? Do they not seem like the logical industry partner? Understand that Dragon Skin body armor has confirmed/recorded stops against rifle rounds in military combat conditions, not just testing–although Dragon Skin has been proven in extensive testing by multiple established ballistic testing facilities, as well.

It could be argued that MIT's pursuit of a flexible scalar armor system for the future soldier, in itself, validates Pinnacle Armor's Dragon Skin flexible scalar armor disc solution (ceramic and/or titanium scalar armor discs) vs. traditional (fragile) SAPI, ESAPI and BALCS ceramic armor plates. Pinnacle could probably turn MIT's research into working-application reality faster than anyone else in the world. In fact, they (Pinnacle) might be the only company that can do it, since they've got multiple patents on flexible scalar armor, which may include the individual ceramic hard armor discs (disc configuration and construction) and overlapping imbricated-disc-pattern/matrix construction. If MIT DMSE/ISN wants to develop a scalar armor system utilizing imbricated discs (or something similar) within the next 10-20 years, they probably won't be able to work with anyone but Pinnacle, because it will most likely be impossible for them to get around Pinnacle's multiple patents, which are pretty extensive. Besides, why would they (MIT DMSE/ISN) want to work with anyone else but Pinnacle on it? Who else has Pinnacle's experience in successfully developing and manufacturing a flexible scalar body armor system?

The only question is whether or not the U.S. military is ready to make nice again with Neal/Pinnacle, and therefore allow the MIT Department of Materials Science and Engineering (DMSE) and the MIT Institute for Soldier Nanotechnologies (ISN) to collaborate with Pinnacle, or if they're going to hold a grudge.

Anyway, the MIT DMSE team has published a paper on their Polypterus senegalus dermal armor research titled Materials design principles of ancient fish armour (July 27, 2008) in the August 2008 (Vol. 7 No. 8) issue of Nature Materials, and it's an interesting, if highly technical, read.

Another interesting and related read is the MIT Instutute for Soldier Nanotechnologies' (ISN) research project page titled Multiscale Design and Evaluation of Nanostructured Synthetic and Biological Composites As a Guide for New Energy-Absorbing Body Armour Materials Technologies, although DefRev doesn't understand why author Ben Bruet ([email protected]) uses the British spelling "armour" instead of "armor", which is the American spelling. It's possible he's either British, or just pompous (kidding). If it's because he's British, someone might want to remind him he's in America, now (kidding, again).

Note: The phrase "imbricated discs" is just a fancy way of saying/writing "overlapping discs" or "discs arranged in an overlapping pattern". The term "scalar" refers to Dragon Skin body armor's resemblence to animal scales, like fish scales or snake scales.

David Crane started publishing online in 2001. Since that time, governments, military organizations, Special Operators (i.e. professional trigger pullers), agencies, and civilian tactical shooters the world over have come to depend on Defense Review as the authoritative source of news and information on "the latest and greatest" in the field of military defense and tactical technology and hardware, including tactical firearms, ammunition, equipment, gear, and training.
Previous Caladiom Long-Range Smart Sensor/Camera for Perimeter Security Ops
Next ‘Shoot for the Troops’ Celebrity Shoot Being Held in L.A. on August 16, 2008