"We have been working with the NIJ personnel in an aid to their establishing a test protocol and procedure for flexible rifle defeating body armor systems. We are pleased that it has come to fruition and that we have the first and only flexible rifle defeating armor to receive that certification. This is truly a milestone event for law enforcement and military personnel who have been looking for that validation. It has been a long 5-year process. Dragon Skin body armor does substantially enhance the protection capabilities of rifle defeating body armor with less trauma to the body, increased ballistic and multiple repeat hit capabilities, combined with flexibility and coverage options up to a full torso wrap for both males and females. Our mission has been and will always be, to provide the best armor that technology can provide for the survivability and protection for those who protect us," Neal said.

Mr. Neal told us the following in a phone interview on Wednesday (September 13): "This is a history-making event. Now there’s truly a flexible, rifle-defeating body armor that law enforcement and military can [rely on] as definitive proof that the allegations [stated, such as] that we "can’t really [defeat] level three", [that] we "[cannot defeat NIJ] Level IV", which is yet to come, [and] that we "can’t stop [projectiles] at obliquities [shots fired at the vests at oblique angles]" or you "can’t shoot to the joints" and "it fails"–this [Dragon Skin passing NIJ Level III testing] has just dispelled it all."

Pinnacle Armor’s 10"x12" Level III/III+ Dragon Skin panel weighs 4.9 lbs at approx. 3/4-inches thick. The SAPI plate (Level III) weighs approx. 4.6 lbs, but the Level III Dragon Skin panel can take at least two times the number of shots of that the SAPI can take for the test rounds. The SAPI plate is fragile, and must therefore be handled with care. It can crack, chip, or break if dropped or mishandled. The SAPI plate even says "Handle with Care" on the plate itself.. Not good for something intended to be used in a fluid, dynamic combat environment. Infantry warfare in general (and urban warfare in particular) is is a rough business, so any type of fragile, easy-to-damage gear or equipment is likely to create problems for the warfighter in the theater of operations.

By contrast, the 10"x12" SOV-2000 Dragon Skin panel (Level III/III+) is not fragile. It can survive a two-story drop and be none the worse for wear–i.e. no type of damage that would compromise the ballistic integrity of the armor.

The new NIJ Level III flexible body armor (flexible hard armor) spec includes 6 shots on a 10"x12" panel as opposed to the 3-shot SAPI spec (i.e. "rigid system" spec), as well as 30-degree, 45-degree, and 55-degree obliquity requirements in it. Shooting the armor at oblique angles tests both ricochet and penetration aspects of the flexible system. Ricochets are more problematic in the civilian world than the military
environment due to liability concerns for law enforcement departments.
And not having ricochets until approximately 60 degrees unlike the
rigid plates provides for less liability. According to Mr. Neal, when the NIJ Level IV flexible armor system (flexible hard armor) testing comes out, they’re going to set "one huge milestone": Currently, the NIJ Level IV is one shot at zero-degree obliquity–that’s it. The Level IV flexible body armor spec will call for six (6) shots on a 10"x12" panel, as well as the above-desribed obliquity shots.

That said, the new NIJ flexible body armor obliquity specification/requirement is designed for any/all flexible rifle-defeating systems because they’ve allowed the latitude in the specification to make adjustments in the obliquities based upon the configuration of the layout, and that will be in the spec. After all, there could theoretically be different flexible systems in the future.

And, here’s the kicker: SOV-2000 Dragon Skin’s Backface Deformation Signature (BDS) is 30% below the NIJ requirement for trauma, and averages about 445 fps (feet-per-second) faster V50s than the [muzzle-velocity] requirement. It should be noted that Pinnacle Armor has already received NIJ Level IIIA certification for the soft armor component of the SOV-2000 and SOV-3000 (Level IV) Dragon Skin systems (vests).

This significant development (SOV-2000 Dragon Skin passing ballistic testing for NIJ Level III certification) directly refutes some very negative public statements made about Dragon Skin body armor on ProfessionalSoldiers.com by Karl Masters, Program Manager for the Interceptor Body Armor Program at U.S. Army Natick Soldier Center (NSC)/Soldier Systems Center (Natick)/Program Executive Office (PEO) Soldier, earlier this year. At the time Mr. Masters made those public statements, he had just halted testing of Dragon Skin at H.P. White Laboratory, Inc. (Masters was the director of testing). When he halted the tests, Mr. Masters and his associate, James Zheng, had completed less than 1/3rd of the 30 tests that Pinnacle Armor and the U.S. Army/DoD (Department of Defense) had agreed-to beforehand.

Anyway, Mr. Masters and I had a direct exchange in that ProfessionalSoldiers.com thread after I asked him some direct questions.

Mr. Neal also weighed in on the thread in defense of his product.

I’ll let the reader decide whether or not Mr. Masters answered my questions satisfactorily, including my question about the potential conflict of interest created by having the program manager for the Interceptor Body Armor Program (Karl Masters) being put in charge of testing a competing body armor system (Dragon Skin) which happens to also be the single biggest threat to the Interceptor program itself. I find it hard to believe that Mr. Masters and Mr. Zheng were the best two choices for conducting the U.S. Army’s/DoD’s testing of Dragon Skin. In my opinion, the Army/DoD should have found independent testers without any "dog in the hunt".

Defense Review is interested in what Mr. Masters has to say about the new NIJ Level III flexible body armor ballistic test protocols and requirements, and Pinnacle’s SOV-2000 Dragon Skin body armor passing all of them–especially since the new NIJ Level III standard for flexible body armor systems would appear to be a higher/more difficult ballistic standard to meet than the current military standard for SAPI, at present (unconfirmed/unverified).

DefenseReview predicts that Pinnacle Armor will get NIJ Level IV certification for their Level IV/IV+ Dragon Skin very soon. It’s quite likely they will achieve this before the end 2006.

Right-click on the links below and then click on "Save Target As" (if using Microsoft Internet Explorer browser) or "Save Link As" (if using Mozilla Firefox browser) to download and view the following Real Player and Windows Media format video clips of Pinnacle Armor SOV-1000 vs. multiple rounds of 7.62x51mm/.308 Win M80 ball FMJ ammo:

Pinnacle Armor Dragon Skin vs. Interceptor Body Armor Continued…
Is the U.S. Army Deliberately Endangering the Lives of Our Warfighters?

David Crane started publishing online in 2001. Since that time, governments, military organizations, Special Operators (i.e. professional trigger pullers), agencies, and civilian tactical shooters the world over have come to depend on Defense Review as the authoritative source of news and information on "the latest and greatest" in the field of military defense and tactical technology and hardware, including tactical firearms, ammunition, equipment, gear, and training.
Previous M16A5 Concept: A Modular, Multi-Caliber Rifle for Future Infantry Warfighters?
Next MQ-9 Predator-B ‘Hunter-Killer’ UCAV Gets a New Name: Meet the Reaper 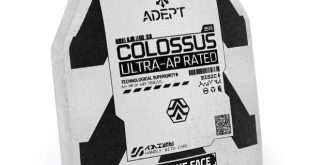