The technology for rearming aircraft with weapons in midair might soon be a reality. This revolutionary technology would enable combat missions, currently requiring dozens of aircraft, to be performed by very few, and to carry out numerous missions by unmanned combat aircraft without returning to base. Airborne rearming might prove to be as significant as the airborne refueling revolution that occurred half a century ago.

In 1921, Alexander P. de Seversky, a Russian pilot who immigrated to the U.S., was the first to apply for and receive a patent for midair refueling. Two years later, the U.S. army began operational testing of midair refueling, but although successful, another decade passed before the necessary technology and technique were perfected and midair refueling became routine. World War II witnessed an even greater improvement in the field of midair refueling technology, but the increase in internal aircraft fuel capacities reduced the need for this technology at the time. With the introduction of… 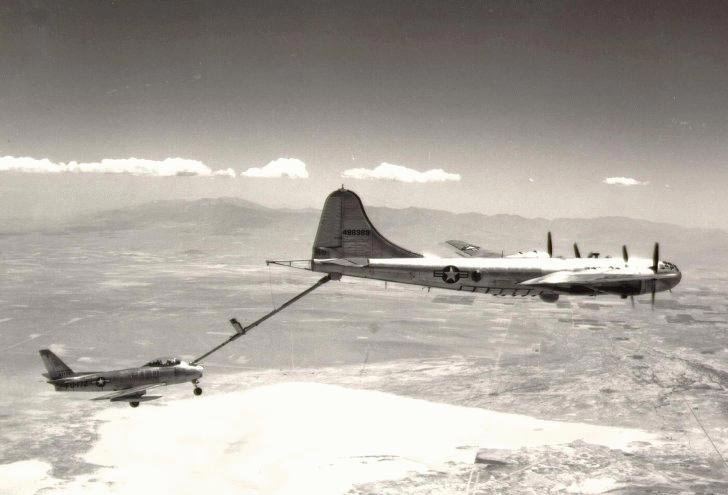 “fuel-hungry” jet-powered bombers in the post-war years, the requirement for aerial refueling became apparent once again. Since existing refueling methods proved inadequate for refueling jet bombers, the Boeing Company began testing the "Boeing boom" system, in which a wide pipe connected to the rear of a modified B-29 fitted with small wings, was lowered and "flown" to a connector on the receiver aircraft. This new system permitted the transfer of over six-times as much fuel per minute and since the 1950’s, further improvements to the boom system have increased its efficiency and safety. But although computers and a variety of sensors were integrated in recent years, the refueling system remains humanly-operated. Several companies world-wide are developing automatic technologies for aerial refueling, designed to further increase the safety of this complex procedure.

Whereas aerial refueling increases the range of an aircraft almost indefinitely, bombers still must return to base for rearming as they are limited in the amount of weapons they carry. However, when the target is situated hundreds of miles away from a friendly base, precious time and resources are lost on flights to base for rearming. Furthermore, in some cases the political situation precludes the use of friendly military bases near the operating theater. 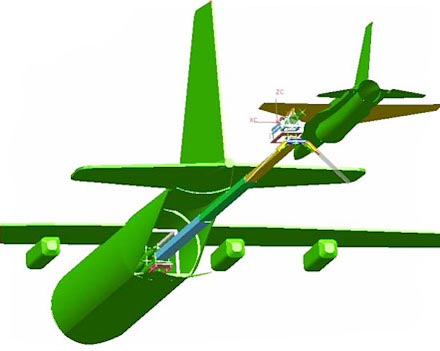 To resolve these problems, the Israeli company Far Technologies Ltd. developed the Airborne Re-Arming System (ABRA a.k.a. Airborne Weapon Re-Arming System, or ABWRA); currently patent pending) in conjunction with the Israel Aircraft Industries (IAI) engineering group that conducted preliminary system design. The ABRA concept is similar in many respects to airborne refueling, with a number of notable modifications. Far Technologies’ system comprises a rearming plane (a C-130, C-130c, C-17, or even a C-5) with an internal bomb storage area and loading device consisting of a large aft door with a modified remote-driven robotic arm (boom) equipped with a day-night camera as well as sensors, and, on the attack aircraft, a special smart pylon to receive the arms from the boom. Each C-130c would be able to carry a payload of up to sixteen 2,000 lb (907 kg) bombs (such as an MK-84), while larger aircraft would easily be able to rearm a full squadron of planes. (A C-17 could potentially carry up to seventy MK-84s and a C-5, around 100.) 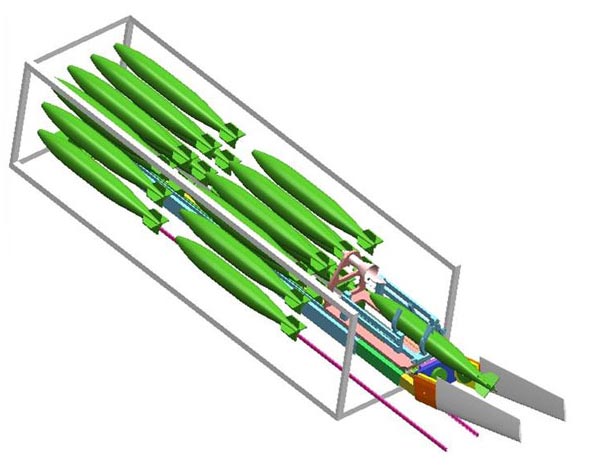 At present, manned attack missions may take up to several hours, and most of this time is spent flying to and from the target. By employing a refueling and rearming aircraft positioned 50 to 150 miles from the target, the efficiency of an air strike could be doubled with only a slight increase in time and flight distance. While manned aircraft could benefit from airborne rearming in certain scenarios, unmanned combat air vehicles (UCAVs) currently under development could theoretically gain much more from such a technology. Unlike manned aircraft, UCAVs can currently stay aloft for days, and in the future, weeks or even months at a time, performing countless refueling and rearming rounds. Such a capability does not yet exist and would require some level of automatic operation, similar to that currently under development for aerial refueling; if successful, however, it would dramatically increase the flexibility of air power utilization in future conflicts.

A comprehensive study, conducted by Professor Asher Tishler from Tel Aviv University, on the logistical, economic, and operational aspects of ABRA outlined a number of benefits over conventional rearming: (1) the number of bombs delivered in a given time frame could be quadrupled in certain situations, (2) a great cost reduction would be incurred, due to the reduction in the number of aircraft needed to perform each mission, (3) an operational capability could be maintained even while airfields and carriers are under attack, (4) a reduction in aircraft response time whenever a new target is located, and, although not explicitly mentioned in Tishler’s report, (5) the potential for aerial conquest, in which an aircraft (typically a UAV or UCAV) occupies a specific area of the enemy’s airspace and maintains it for an unlimited period to observe enemy movements and eliminate all relevant targets in that area.

Click here to watch an animation video of the ABRA system in action. 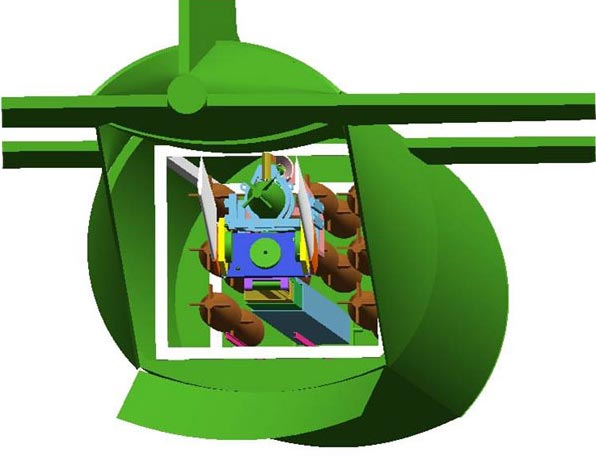 Q: Was your proposal the first in-depth concept of an airborne weapon rearming system?

A: The idea was surely suggested in the past, but no research was conducted that encompasses strategic, operational, logistical, and financial aspects of the technology.

Q: What are the basic components of the proposed ABRA system, and how does the rearming procedure work?

A: On the rearming craft, there would be a boom-like system similar to that used for refueling. The rearming boom would have larger wings than conventional boom designs, due to the need to lift bombs up to one ton. The system would include a special rail that drives the bombs from the rearming craft to the target craft. The target craft would carry a modified pylon to receive the bombs from the rearming boom. Changes to both aircraft would be minor and the smart pylon would be compatible with most existing attack aircraft. The current bottleneck of the concept is the need to develop an automated refueling/rearming capability. These technologies are currently under development around the world and should probably reach operational status in a few years.

Q: Is there a problem with arming bombs in midair?

A: No. Existing technologies such as Insensitive Munitions, remote triggers for bombs, and other safety systems should make future midair rearming extremely safe.

Q: How long would the rearming process take, and would it be possible to rearm and refuel simultaneously, cutting the time it would take to complete a round?

A: In theory there is a huge advantage in concentrating the logistical support on a small number of aircraft. In practice it will require an extensive engineering fit to perform a rearm and a refuel at the same time. One option is to perform a rearm using the back door and a refuel using refueling pods mounted on the wings. We estimate that the refueling process would take longer than the rearming, mainly due to the time it takes to transfer the fuel from one plane to another.

Q: In terms of the aerodynamics of the plane, is there a problem with attaching a bomb to one of the wings (i.e., to one side of the plane) in-flight?

A: According to our calculations, the lift generated by the boom and the aircraft wings in conjunction with computerized compensation systems on board the target craft would enable the rearming procedure to be performed on one wing at a time without disturbing the flight path of the plane.

A: We have not yet developed the full specifications of the new system but I can imagine modifications to the boom that might allow rearming of such crafts as well.

Q: Do you think it would be a good idea to develop ABRA initially for manned aircraft?

A: Theoretically UCAVs have the most to gain from the development of ABRA. Although, like many experts, I believe that the future of military aviation belongs to unmanned aircraft, I also know from my own experience that the best way to advance a complex new technology is by "upgrading" an existing one. The Airborne Rearming System (ABRA) consists of a boom-like system and a variety of other well tested technologies and, in all likelihood, would initially be tested using a manned aircraft. This approach would reduce the cost of development and surely extend the capabilities of the current and next generation of manned aircraft, which are planned to remain in service for the next 30-50 years.

Q: Would you elaborate on the new pylon design you have suggested?

A: The "smart pylon", as we call it, has several unique features that enable it to receive bombs automatically in midair. Three of the main features are the pneumatic multi-action ejection mechanism, active sway brace for midair operation, and a retractable pin for male/female connection. The smart pylon also includes sensors that measure the distance to the incoming boom arm and assist the automatic attachment mechanism.

Q: Your study examined rearming scenarios involving two 2000 lb. bombs. Recent conflicts have suggested that there will be wider use of smaller bombs (such as the new 250 lb. GBU-39 small diameter bomb) in the future. Would your system be able to rearm an aircraft with a cluster of smaller bombs?

A: Your analysis is correct and we have in fact considered the possibility of performing a rearm using a cluster of smaller bombs. Another option suggested (also patent pending) was the use of a modified/converted fuel tank to carry and deliver a variety of submunitions that could be attached by the rearm boom.

Q: What stage of development have you reached? Are you looking for investors or a company to take on the actual development of the system?

A: At our request, Israel Aircraft Industries (IAI), as a subcontractor, performed a feasibility study and a preliminary system design to prove that there are no technological barriers. The study has been completed successfully and we are currently seeking funding for building a demonstration module The project will be performed in several stages. Initially we will test only one type of bomb and then move on to test other heavier ones.

Q: Given the proper funding, when do you predict an operational commercial version of ABRA will be available?

A: I have no doubt that with the right funding we could have a working system within the next 3-5 years.

Q: Both you and the USA Air Force filed for a patent on midair rearming. Where do things stand at this point? 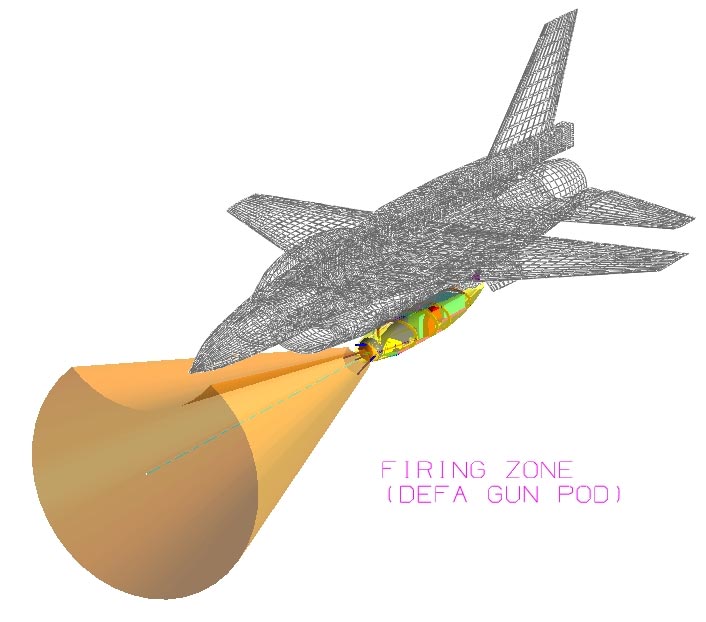 A: I know that we filed a patent two months before they did. Both systems are surprisingly similar. We intend to work with our lawyers towards receiving a U.S./European patent in the near future.

Q: We understand that you are currently working on a number of other innovative concepts. Would you briefly describe them for us?

A: Aside from rearming, we are currently working on a number of other projects:

3. Converting Fuel Drop Tanks into Mass Dispensers – Modifications to external fuel tanks to allow them to carry and deliver different types of submunitions.

5. Dogfight (BFM) Real Time Guiding System – Real time dog-fight software solution that would provide a pilot with direct guidance from the HUD (heads up display) on the location of his target.

Click on this link to watch an animation video of the ABRA system in action.

ABRAcadabra – AirBorne ReArming (The Future of Things – TFOT.org). Original version of this article (above).

In-Flight Re-Arming Could Be the Next Big Thing in Aerial Combat (DailyTech.com)