Sound Technology (a.k.a. Sound Tech Silencers), headed-up by Mark White, makes some of the best muzzle cans (sound suppressors/silencers) in the business. Lately, they’ve been working on some very interesting things, over there. Anyway, Mark just sent DefenseReview a very interesting and informative letter (along with pics) about what he/Sound Technology has been up to lately with regard to their "Skunkworks" projects. It’s very interesting reading. Here’s the letter, in it’s entirety:

The past six months have been mostly spent doing intensive research and development for the more intense long-range rifle cartridges. Both private contractors and military personnel have been involved in the testing. That has meant little money to Sound Tech, but a great gain in terms of information. Some of this information is classified, so I will…

purposely speak in vague and general terms. Interestingly, the .408 was the most demanding of the calibers, since it was the most intense in terms of exit pressure — even more so than the .50 BMG, probably due to lots of powder and a solid copper bullet. The .338 Lapua Magnum with a 250-grain pellet is probably the most useful, since it offers long range combined with relatively light weight and moderate recoil. We learned a lot, and what we learned has definitely changed the way we assemble and construct our heavier rifle suppressors.

Starting with .223 and .308, we now maintain a certain minimum volume and length, which is closely tied to the weight of powder charge, bore aperture and the intensity of each cartridge category. As an aside, we had hopes for the 6.8mm, but the military recently found that the modern (and almost identical) version of the .280 British cartridge of 1946 wasn’t really all that much better than the Russian 7.62x39mm cartridge. The military has reportedly abandoned the 6.8mm, and Remington has ceased manufacture of ammunition. I personally believe that the .223 is close (but not close enough) to what needs to be, and that a modest increase to 6mm will do all that needs to be done.

We have added a very small amount to the wall thickness of most of our cans, hardened our blast baffles, and increased their thickness a small amount as well. In addition, we had a complaint of rattling so we now weld each and every component into each and every can to eliminate any possible internal shifting. This means more work – but complaints in this area have ceased. All of our rifle can blast baffles are now hardened in order to resist peening from high velocity particles in the gas. This cost has been worth the effort as well.

Our military customers have requested better flash hiding ability and recoil reduction, while not being particularly concerned about the reduction of sound, which they felt was more than adequate. We now make a radically different style of can for long-range military sniper rifles in heavy calibers. This new can reduces recoil by about 85% and very effectively stifles muzzle flash. The can reduces sound to the point where ear protection is not required unless the operator is shooting from inside a building, and the few little sparks that are left to emerge at night are not sufficient to do anything to the tube in night vision equipment. We still make our standard cans for civilian users, since they are more concerned with sound than they are with size, and it takes size to reduce recoil.

I will try to have Benjamin scan a photo of the .50 muzzle can prototype that Steve Romans in Idaho is using in conjunction with our device to reduce recoil, swallow muzzle flash and enhance accuracy. We may be able to email this, or will send a disc.

Here are the Sound Technology pics that Mark sent DefenseReview, with his letter:

Custom.50 BMG Rifle with Solid Aluminum Stock and Recoil-Reducing Can

Custom .50 BMG Rifle (Same as Above) from Different Angle

If you or your organization are currently searching for some top notch cans (silencers/suppressors) for your rifles and carbines (for both CQB and sniper work), DefRev recommends you give Sound Technology/Sound Tech Silencers a call ASAP. Mark White/Sound Technology can be contacted at 205-664-5860 or by email at [email protected]. Not only does Sound Tech make some of the best sound suppressors/silencers around, but Mark White is a good guy, to boot. DefenseReview was very impressed with him when we met him at SWAT Round-Up 2002 in Orange County (Orlando), FL. Mark knows his stuff.

David Crane started publishing online in 2001. Since that time, governments, military organizations, Special Operators (i.e. professional trigger pullers), agencies, and civilian tactical shooters the world over have come to depend on Defense Review as the authoritative source of news and information on "the latest and greatest" in the field of military defense and tactical technology and hardware, including tactical firearms, ammunition, equipment, gear, and training.
Previous Addendum: Troy Industries Rock SOPMOD M14 and CQB-SPC Materials
Next RMP-Vang Comp 870 12GA Shotgun: Combat Shotgun for Close Quarters Battle (CQB) 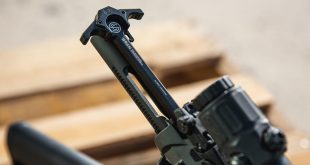