One year after answering the Marine Corps’ call to meet an urgent need, the Force Protection Systems Squadron here is preparing to do it again. It will deploy another Tactical Automated Security System to Al Taqaddum Air Base, Iraq, this month.

"The Marine Corps came to us saying, ‘We want to make this our system of choice for expeditionary electronic security systems,’" said Tactical Systems Program Manager 1st Lt. Ted Boender. They want to install another system at Al Taqaddum, he said.

The TASS, an intrusion-detection system, protects a military installation by using…
thermal imaging cameras, radars and even mini-unmanned aerial vehicles to detect threats along its perimeter. A centralized tower gathers the information and reports it to a computer at the base defense operations center, where operators pinpoint the threat’s exact location and decide how to act upon it.

The squadron’s initial involvement with the Marines came when the service expressed an urgent warfighter need for the system at Al Asad Air Base, Iraq, in 2005. The FPSS delivered the contract in less than six weeks and the system itself in less than 90 days, a departure from the sometimes year-long process. Within weeks the system was installed – days ahead of schedule and under cost.
"We pulled out all the stops for them," Lieutenant Boender said. "We expedited the system to them in a very short amount of time."
That, paired with its successes after set up, made it a good contender for a second installation. At Al Asad, success translated into a more secure area, fewer bodies on perimeter guard and patrol, a cost savings of $200,000 and peace of mind.
"They are very happy with the situational awareness that it provides to the perimeter," he said. "You might sleep better at night knowing that thermal imaging cameras are looking 360 degrees around the base."
In October 2005, the base was taking constant fire from outside the base fence. The newly installed system detected several individuals approaching the installation’s perimeter, and a patrol was sent to intercept them. Although individuals were not caught, Lieutenant Boender said a potential attack on the base was avoided.
"They very well could have set up mortars, rockets or inflicted damage to the base … Surely, we thwarted some type of planning or possible attack," he said.
John Atkinson, Marine Central Command anti-terrorism and force protection officer, has worked closely with the squadron and said that the TASS has proven beneficial.
"It has provided the Marines increased battlespace management and situational awareness at our bases in Southwest Asia … The technological innovations provided by the FPSS are the linchpin to our integrated base defense and are essential to our battlespace awareness," he said.
Though customer feedback points to satisfaction, Lieutenant Boender said that there remains a constant eye on ways to improve the system. For example, the next generation of imagers – ultra long-range thermal imagers – will extend surveillance perimeter views beyond the standard three miles.
Software upgrades to run the enunciator – the computer-generated installation map that relays the precise location of an intrusion- are also on the horizon.
"This will bring us increased capabilities and interoperability with other systems. For example, to be able to better communicate with Army systems," Lieutenant Boender said.
One such system is the Army’s Counter Rocket Artillery and Mortar (C-RAM) system, which, when married with the TASS, has the capacity to detect a mortar or rocket, alert operators, display the weapon’s point of origin, counter-fire, predict its point of impact, and shoot down the incoming round.
At the end of the day, Lieutenant Boender said, success means saving lives, and sharing the job with the Marine Corps brings invaluable results.
"It’s by far the most rewarding job that I’ve done," he said. "The Marine Corps is a very special group of people to work with … and they definitely know how to get things accomplished."
Col. Ken Hasegawa, FPSS commander, said the reward comes not only in averting disaster, but also in being part of a larger team with a common goal – saving lives.
"The ability to ‘See First, Understand First, and Act First’ is giving our deployed multi-service forces crucial information and time to react," he said. "It’s a privilege knowing our squadron fields systems that play a daily role in meeting that joint effort."
Tactical Automated Security System (TASS) Gets Deployed to Iraq by David Crane

David Crane started publishing online in 2001. Since that time, governments, military organizations, Special Operators (i.e. professional trigger pullers), agencies, and civilian tactical shooters the world over have come to depend on Defense Review as the authoritative source of news and information on "the latest and greatest" in the field of military defense and tactical technology and hardware, including tactical firearms, ammunition, equipment, gear, and training.
Previous Transcript: Gen. Sorenson’s statements about Dragon Skin vs. Interceptor armor
Next Dillon M134D Gatling Gun to Be Featured on ”GI Factory” Tonight 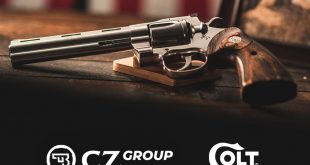