This article contains high-resolution scanned photos (JPEG format) of the Shiva Ki Fightin’ Bowie Knife, which is a custom combat/fighting bowie knife.  In trained hands, this knife can be utilized effectively for anti-personnel applications.  Click on photos (below) to view them full-size.

Back in January (2004), DefRev published an article on Shiva Ki Custom Knives. The article was titled "Tactical/Battle Blades for 21st Century Spec-Ops. Meet Shiva Ki". Shiva Ki is currently one of the best fixed-blade fighting knife makers in the country. Shiva’s knives are also some of the sharpest in the world. They cut like magic. So, we were proud to give him the ink.

Well, Shiva’s just come out with a true fighting bowie knife called, appropriately and simply enough, "Fightin’ Bowie". Believe it or not, I actually inspired Shiva to create this particular knife. I pestered him, really. You see, my personal opinion is that a true bowie knife, especially one designed specificaly for fighting/combat and anti-personnel use, absolutely has to have a sharpened back clip. It’s also my opinion that… 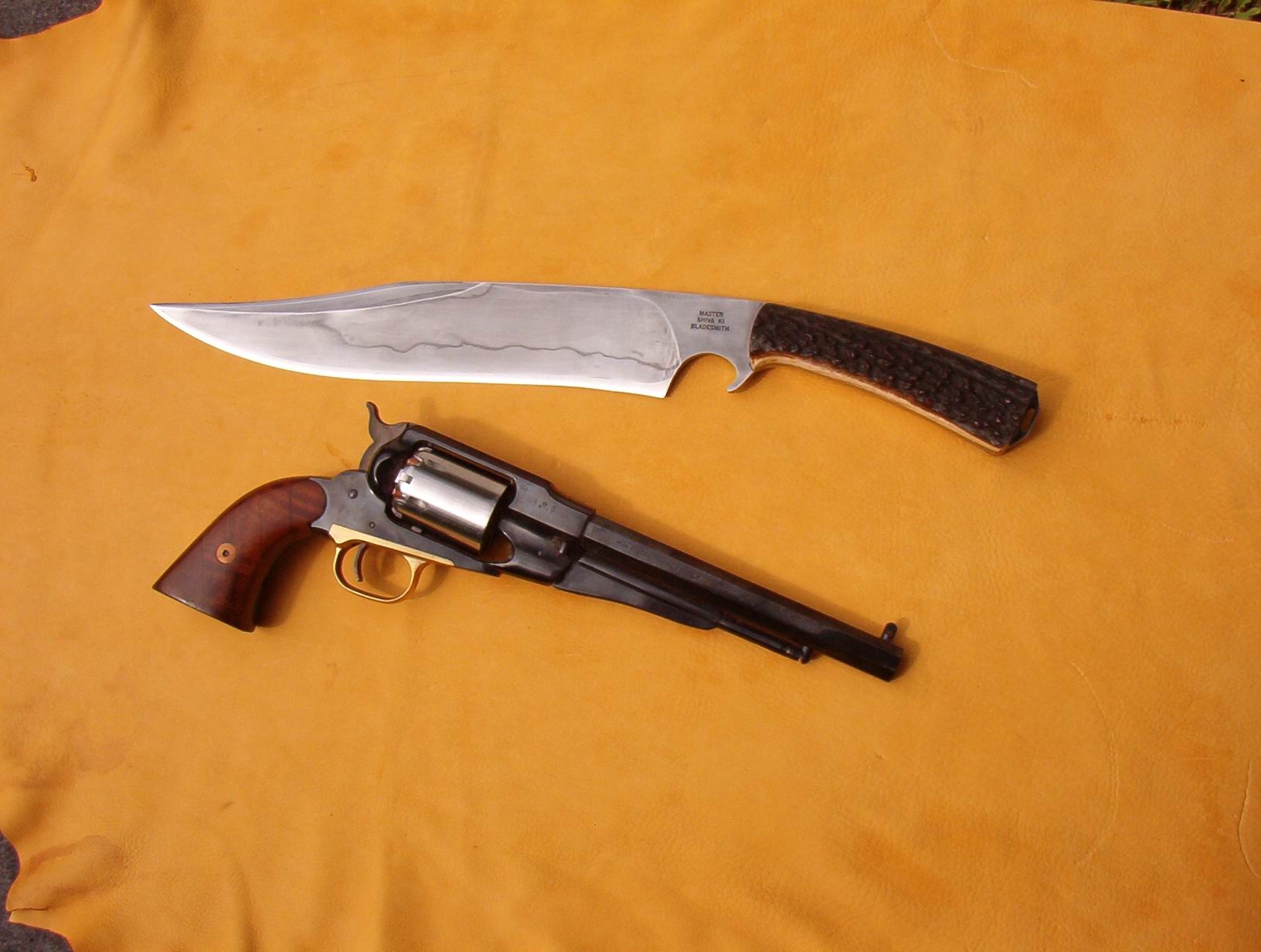 longer is better (up to a point–excuse the pun), provided one can keep the knife light and perfectly balanced, which Shiva can. The blade on the Shiva Ki "Fightin Bowie" knife is 13 inches (false guard to tip), which is right about the blade-length limit for a bowie knife.

Yes, this is a BIG knife. But, Shiva told me it’s properly balanced, so it still feels light and is extremely fast in the hand. And, yes, the "Fightin Bowie’s" back clip is fully-sharpened. Part of what makes the bowie knife so formidable in a fight is it’s blade length. First, this length gives it a reach advantage, thus allowing its user to fight at further distance. Second, at a blade length of at least 9-10 inches, a knife starts to enjoy leverage, giving it a “fly swatter effect”, particularly when using snap-cuts and back-cuts (more on this in a second). Just like a fly swatter, the tip of the bowie knife is moving incredibly fast in a snap-cut or slash.

This length/leverage aspect, combined with the bowie’s sharpened back-clip, make the American bowie knife preeminant as a fighting knife (over ALL others). The sharpened back clip allows the operator to perform the deadly "back-cut", which is a lightning-fast and deceptive move. Someone who isn’t trained to guard against it WILL get caught by it, and most likely perish, as a result. You can’t see it coming, since, during a back-cut, the knife moves faster than 1/32nd of a second, which is faster than human blinking speed. Human beings can’t see something that moves faster than they can blink. The back-cutting movement is the single fastest movement the human body can make. Finally, there’s the bowie knife’s weight and blade depth, giving the knife tremendous power in the cut (especially with fast or hard cuts/strikes), and allowing it to literally hack off limbs in one shot.
So, the sharpened back clip, combined with the bowie knife’s size, makes the American bowie knife, in trained hands, the most deadly fighting knife ever conceived by man. Bowie knives were actually outlawed for carry in the Southern states in the mid 1800’s (I believe by about 1860, not sure though) because they could cause so much damage so quickly. Actually, it was really the New Orleans "gentlemen" who employed them in combat that were so deadly.
How deadly were they? Bill Bagwell, noted bowie knife maker (maker of the "Hell’s Belle" bowie) and "Soldier of Fortune" (SOF) Magazine columnist, has written in the past that if you had a time machine, and you were to drop a modern day military Special Operator (i.e. Delta Force operator, Navy DevGroup operator, British SAS operator, doesn’t matter) back in time to New Orleans in the 1830’s to 1850’s, and he were unlucky enough to get himself involved in a knife fight with a bowie knife practitioner, said operator would most likely be killed (butchered, actually) in seconds. That’s seconds, not minutes.

Actually, some U.S. Army Special Forces operators (most likely Delta Force operators) might now have at least some chance (or perhaps even a decent chance) at survival in that time machine scenario, since some of them have reportedly been trained in bowie knife-fighting techniques at least once in the last few years. So, at least some of them now have a base knowledge of the deadly back-cut and other bowie knife fighting tactics and techniques. DefRev isn’t sure which specific U.S. Army Special Forces units were trained in this discipline. However, it’s our understanding that whichever unit it was, they were trained at Ft. Bragg. Bill Bagwell was, to our understanding, their instructor.

Bowie knife fighters in that town, in that era, were probably the deadliest knife fighters ever to walk the face of the earth. This is because New Orleans was the fencing instruction capitol of the world in the early to mid-1800’s, when fencing was at it’s absolute zenith of development. And, bowie knife fighting technique came from fencing. Understand, we’re not talking about modern day sport fencing. This was old school combat fencing (used for fighting and duelling) with a fully sharpened rapier or cutlass–totally different. Anyway, the best of the best of these fencing instructors was the Spanish instructor Don Jose "Pepe" Lulla. The Spanish fencing technique was the most devious (as opposed to the Italian or French techniques). Anway, Pepe was also a master bowie knife fighter and pistol duelist.
The bowie knife most likely evolved from the pirate’s cutlass (sword). The cutlass had a similar shape and sharpened back clip, although it was much larger than the bowie knife. In the mid-1800’s New Orleans was awash with pirates, so guy’s like Pepe would most likely have gotten a chance to see those guys fight with their cutlasses. He probably would have then combined the cutlass technique with rapier technique, and adapted it to fighting with a smaller blade (9-15 inches), thus creating a highly effective bowie knife-fighting system. Of course, this is just conjecture, since no one really knows the specifics of how bowie knife-fighting technique evolved.
Well, that concludes my history lesson on the great American bowie knife!
Click here to visit the Shiva Ki Custom Knives website. You can contact Shiva by phone at 225-356-7274, or via email at [email protected] or [email protected].
Click here to see a pic of the Shiva Ki "Fightin’ Bowie in an unfinished state, after it had just been heat-treated. Notice the bold japanese-like temper line.
Here’s a pic of the unfinished "Fightin’ Bowie".
James A. Keating (Jim Keating), out of , currently teaches bowie knife-fighting, and might actually be the best in the country at it. Click here to visit James Keating’s/Comtech’s website. Jim has a series of tapes on bowie knife fighting that are well worth purchasing if you own, or plan on owning, any bowie knives. I’ve wathced Keating’s "Bowie Basics" and "Deadly Back Cut" tapes, and they’re both really good.
James Keating can be contacted via email at [email protected]
Bill Bagwell writes the "Battle Blades" column for "Soldier of Fortune" (SOF) Magazine.
Bagwell has also written a very informative bowie knife book called "Bowies, Big Knives, and the Best of Battle Blades".
Additional Photos (Click on photos below to view them full-size.):
Shiva Ki Custom Fightin’ Bowie Knife: Big, Fast, and Mean. by David Crane

David Crane started publishing online in 2001. Since that time, governments, military organizations, Special Operators (i.e. professional trigger pullers), agencies, and civilian tactical shooters the world over have come to depend on Defense Review as the authoritative source of news and information on "the latest and greatest" in the field of military defense and tactical technology and hardware, including tactical firearms, ammunition, equipment, gear, and training.
Previous FN MK 48 MOD 0 7.62mm Lightweight Machine Gun for U.S. Military SPECOPS/SPECWAR
Next Fractal Camouflage and New Digitized Tiger Stripe Camo Patterns