This weapons package is the brainchild of PWS co-owners/partners Todd Tuttle and Dean Sylvester (Lead Designer), and was designed specifically for CQB/CQC operations, including Direct Action operations/missions like enemy/threat neutralization/liquidation, hostage rescue, and snatch-and-grab ops, as well as PSD/executive protection ops where the weapon is deployed from a vehicle. The 7" barrel resulted from their desire to… 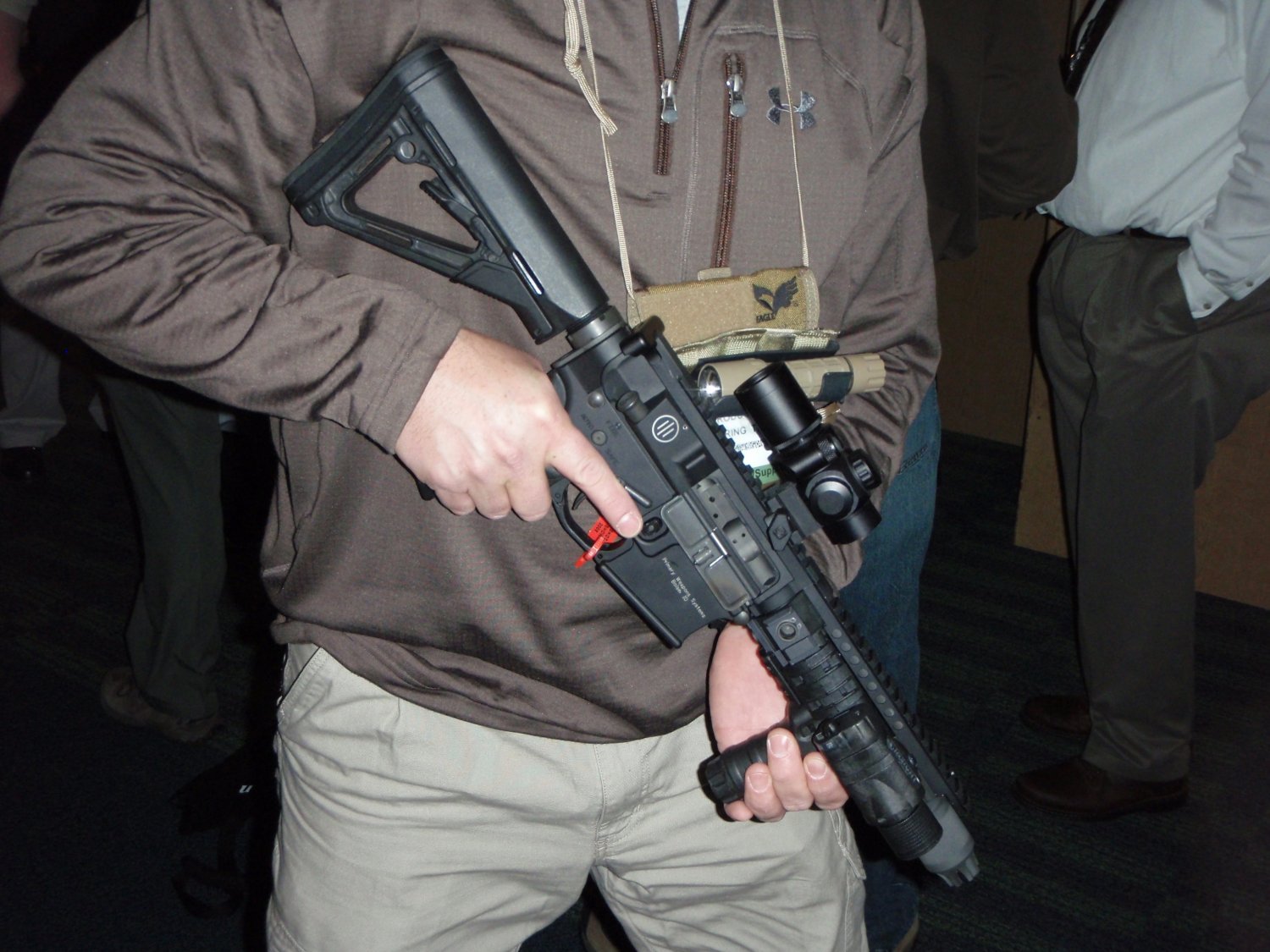 make the Diablo roughly the same length/size as an HK MP5 submachine gun (SMG), yet fire the more ballistically-capable 5.56mm round for enhanced penetration and terminal ballistics (terminal ballistic performance against live, soft tissue and hard barriers). The PWS Diablo 5.56mm SBR upper is a NFA item, so all NFA rules apply to it that would apply to any Short Barreled Rifle upper receiver.

The Diablo Upper’s long-stroke gas piston/op-rod operation utilizes a larger-diameter piston than the PWS drop-in/retrofit short-stroke piston system, which has become quite popular with some very knowledgable and experienced shooters, lately, including tactical gun builders. PWS decided to go with a long-stroke piston-driven system instead of a short-stroke system for enhanced smoothness-of-operation out of such a short barreled (7") SBR.

Defense Review is chomping at the bit to run a Diablo piston-driven SBR upper at the range, ASAP. We’ll shoot some video and report on it if/when we do so.

According to PWS’ resident end-user liaison, Stacey Nagey, a future version of the Diablo Upper will be chambered in 6.8x43mm SPC a.k.a. 6.8 SPC a.k.a. 6.8mm SPC, but we’re getting ahead of ourselves. 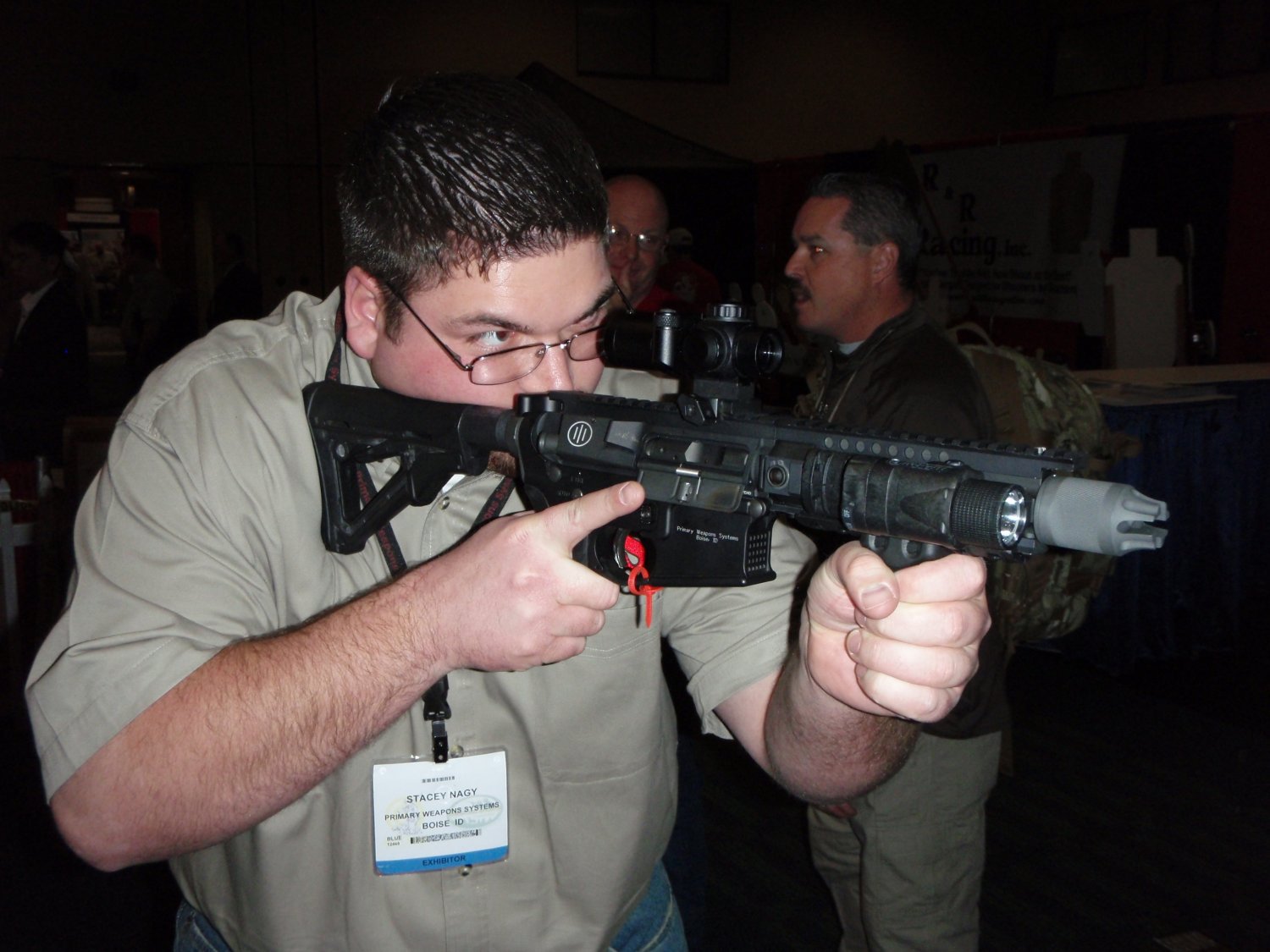 DefenseReview conducted a phone interview on January 28, 2009 (1/08/09) with Mr. Nagey after the show (SHOT Show), and it highlights PWS’ innovative drive that comes from its founder, Todd Tuttle, ever since it’s earlier days when the company was called AK Concepts, Inc, and continues through to the present day.

The following are edited/redacted portions of that interview:

David Crane (DefenseReview): O.k., so this Diablo project, what was its origin? 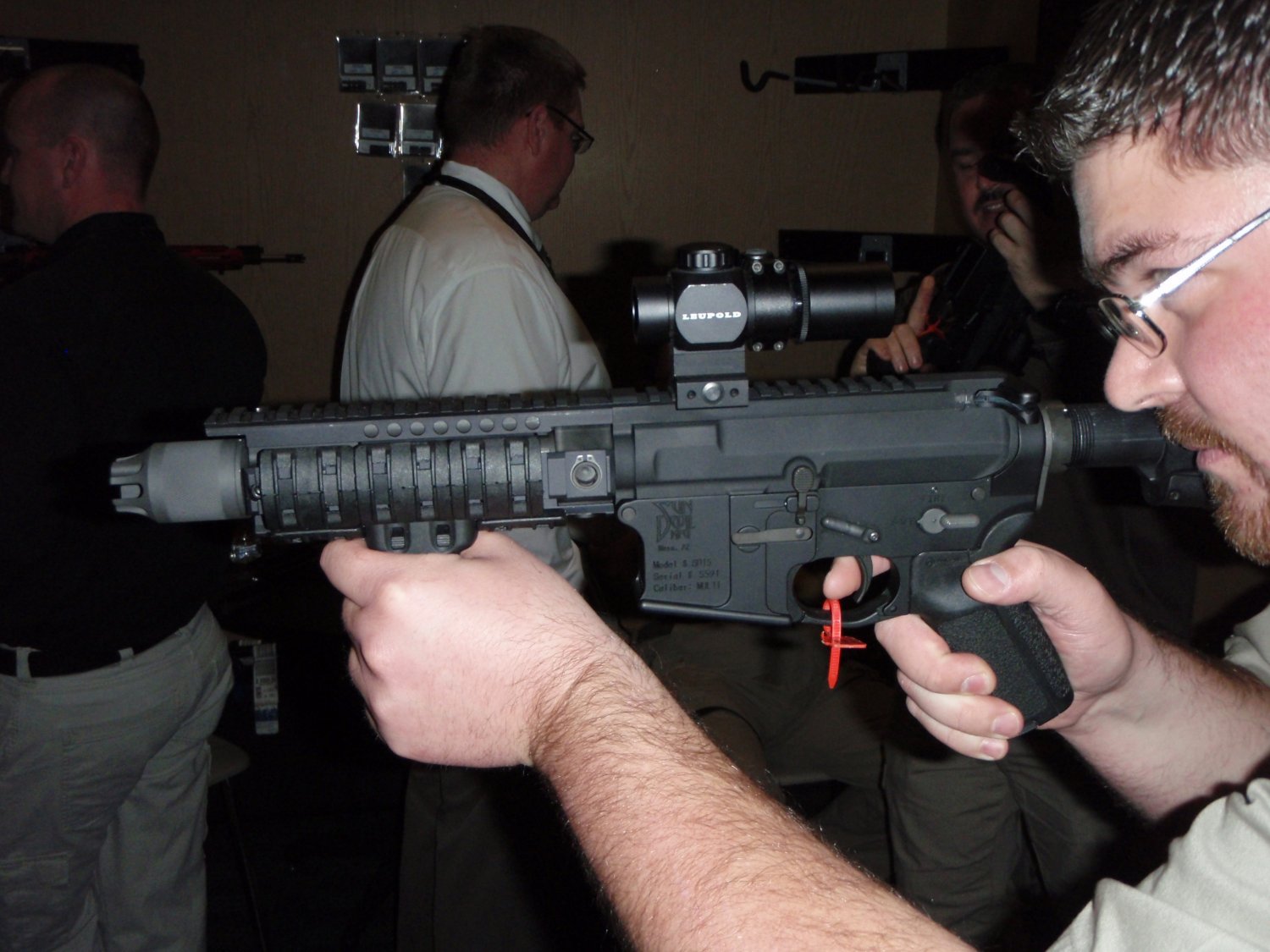 Nagy: Portability. Ya’ know, the ease of movement in close quarters [like during dynamic CQB/CQC scenarios like during direct action and hostage rescue missions/operations], ease of deployment from inside a vehicle, those kinds of applications.

Crane: O.k., so even though you’re losing a considerable amount of velocity, you’re saying, basically, this is for short-range, anyway, this is for out to 200 yards at the most…

Nagy: Yes, and we do intend to do that as soon as we get some barrels. 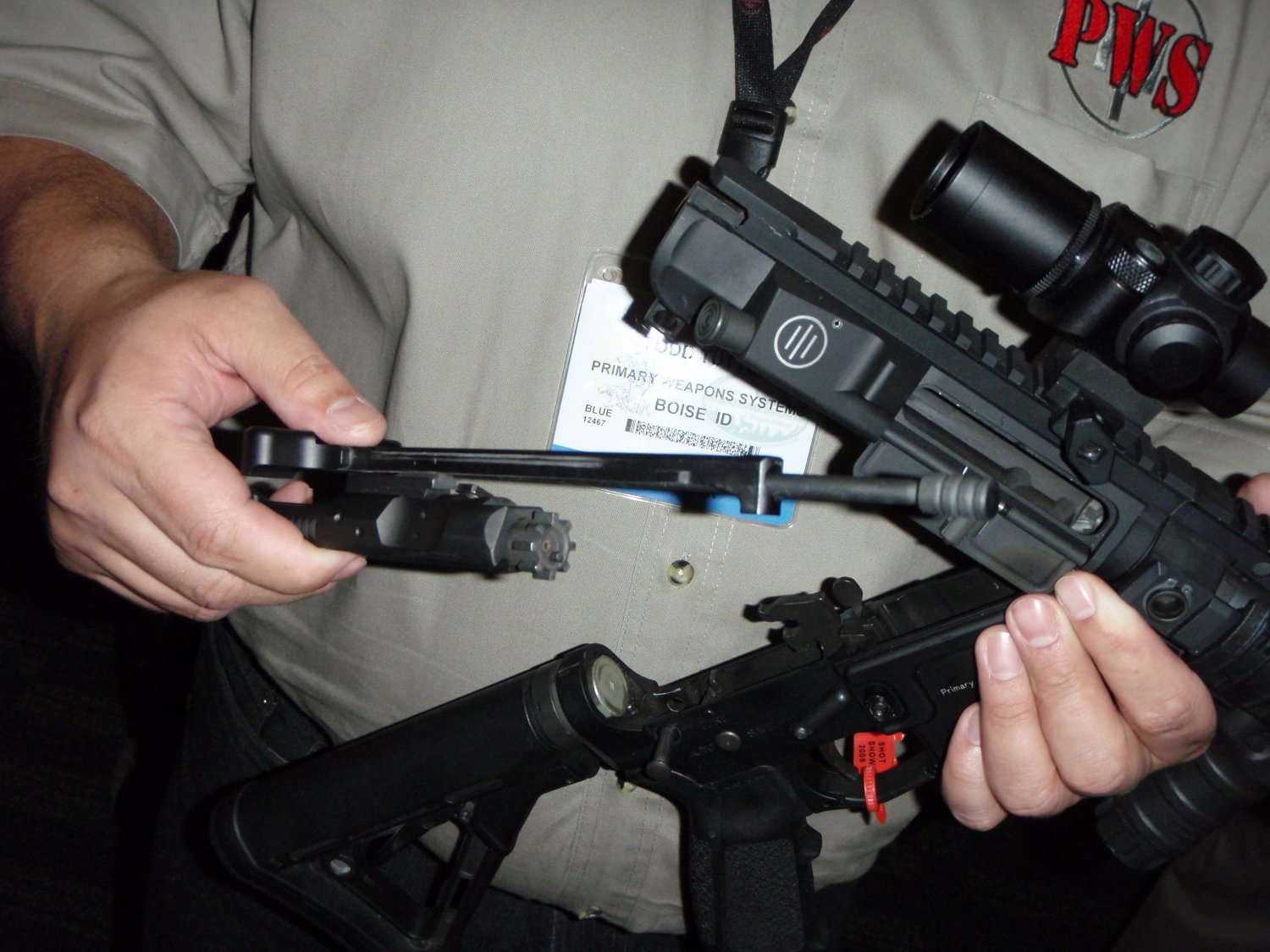 Crane: In that barrel length, I think the 6.8 is the smarter way to go.

Nagy: That’s been our intention, all along. It was just a matter of supply. Component-wise, we were able to get 5.56 barrels much more readily, so we decided let’s prove this concept in 5.56 because that is the round that agencies, by and far, are still using–agencies and units of law enforcement and military. 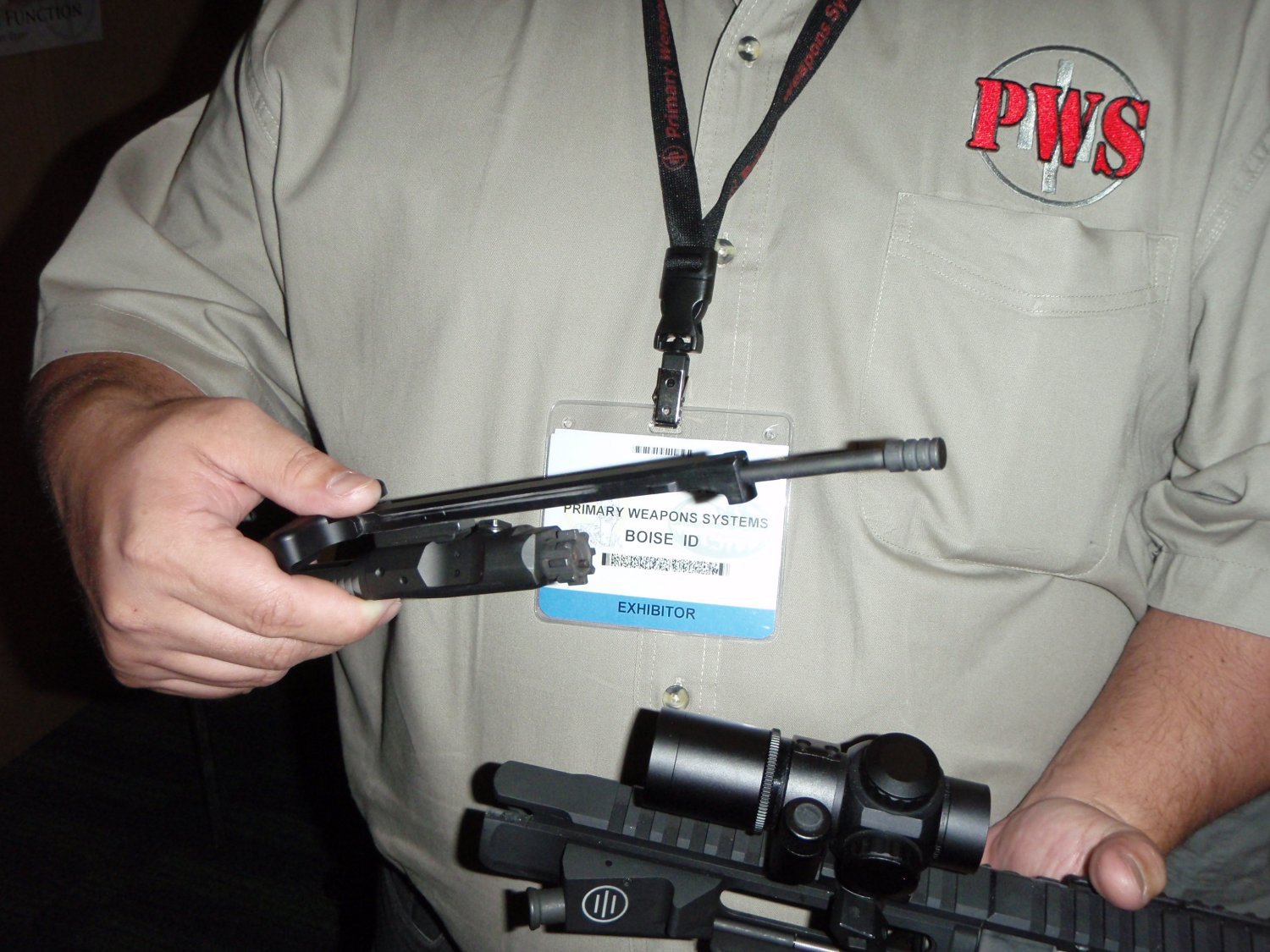 Nagy: So that you have the widest range of compatibility with the varying bullet weights. If you go to too much twist, then the [lighter] bullets seem to not group as well. So, that was basically it. That twist let us get the best accuracy results with 55-grain PMC, that’s just kinda’ the bulk test ammo that we use. We figure if a weapon can shoot that reliably and well, then it’s probably going to be able to go through anything. 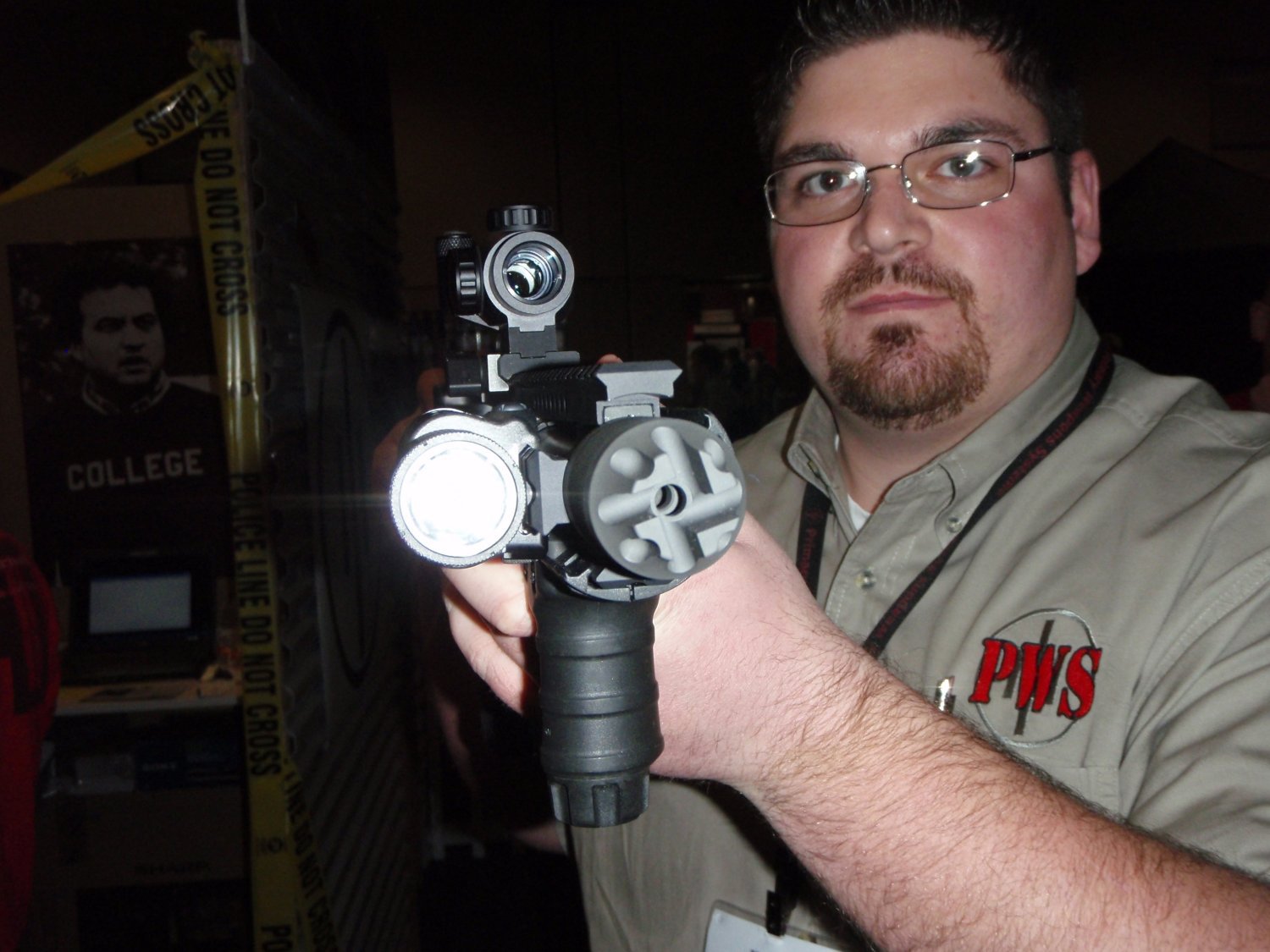 Crane: O.k., so tell me a little bit about the muzzle device. I guess you’d call it a flash hider-slash-compensator (flash hider/compensator), or what is that thing on the front? What do you call it?

Nagy: [Laughing] You are!

Crane: [Laughing] I was just coming up with that off-the-cuff!

Nagy: No, that’s exactly what it is. It’s meant to compensate the weapon and eliminate the 3-foot fireball that’s usually associated with a short AR.

Crane: Right, and does it do that? 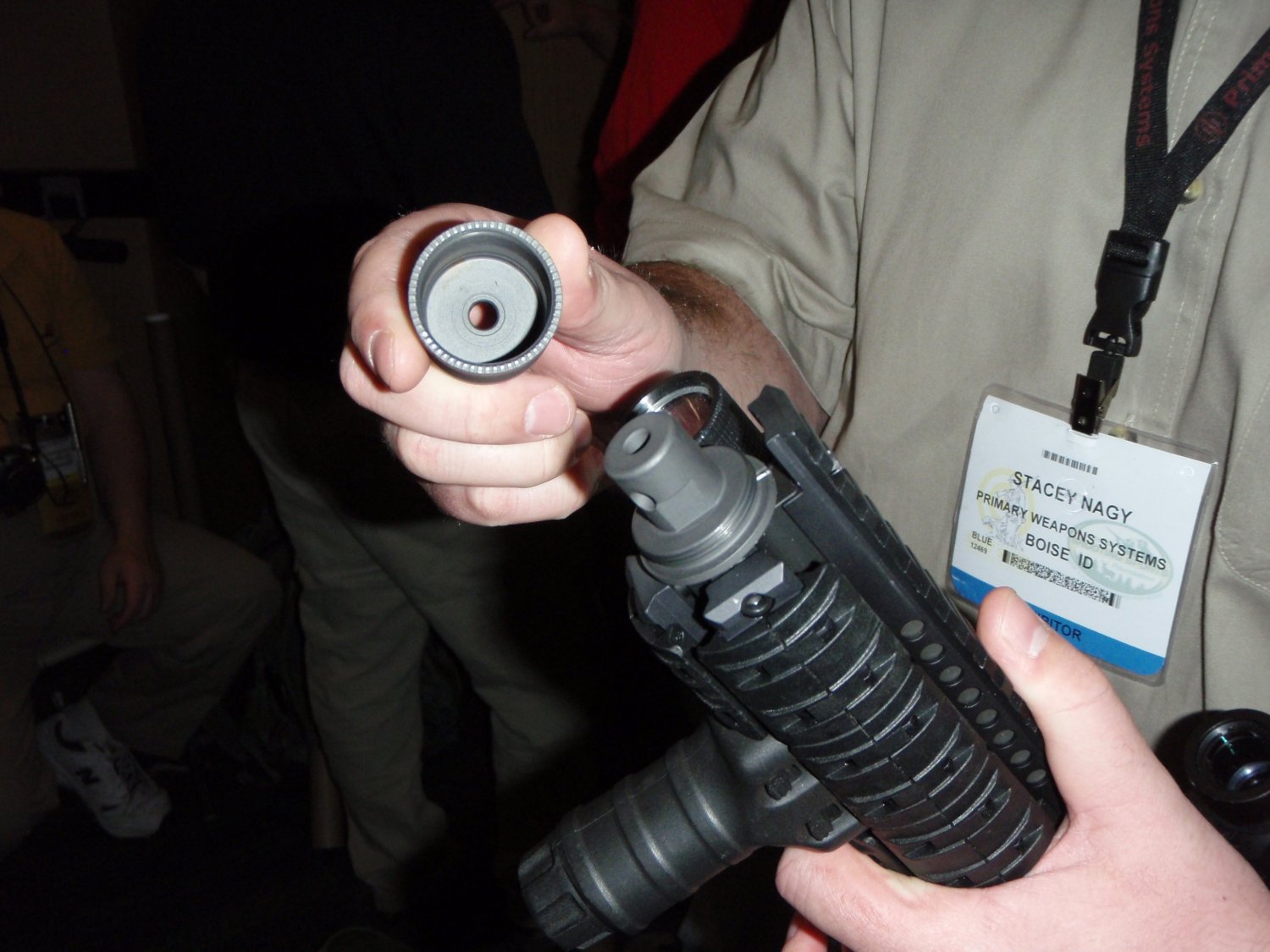 Nagy: It does. Yeah.

Crane: How much does it reduce muzzle climb?

Nagy: Not quite as well as the FSC556, which I’ve had people write that they feel that it reduces it [muzzle climb/muzzle rise] as much as 90%. So, I would say it’s more in the 75-80 range. You can do a mag dump without having to worry about [missing when you’re] stitchin’ up the target.

Crane: Wait, what was the last thing you said?

Nagy: If you’re doing a magazine dump on full-auto, you’re going to keep your pattern. You’re not going to see your pattern start climbing up the target.

Crane: At what range?

Crane: In a full-auto dump [full 30-round magazine dump]. 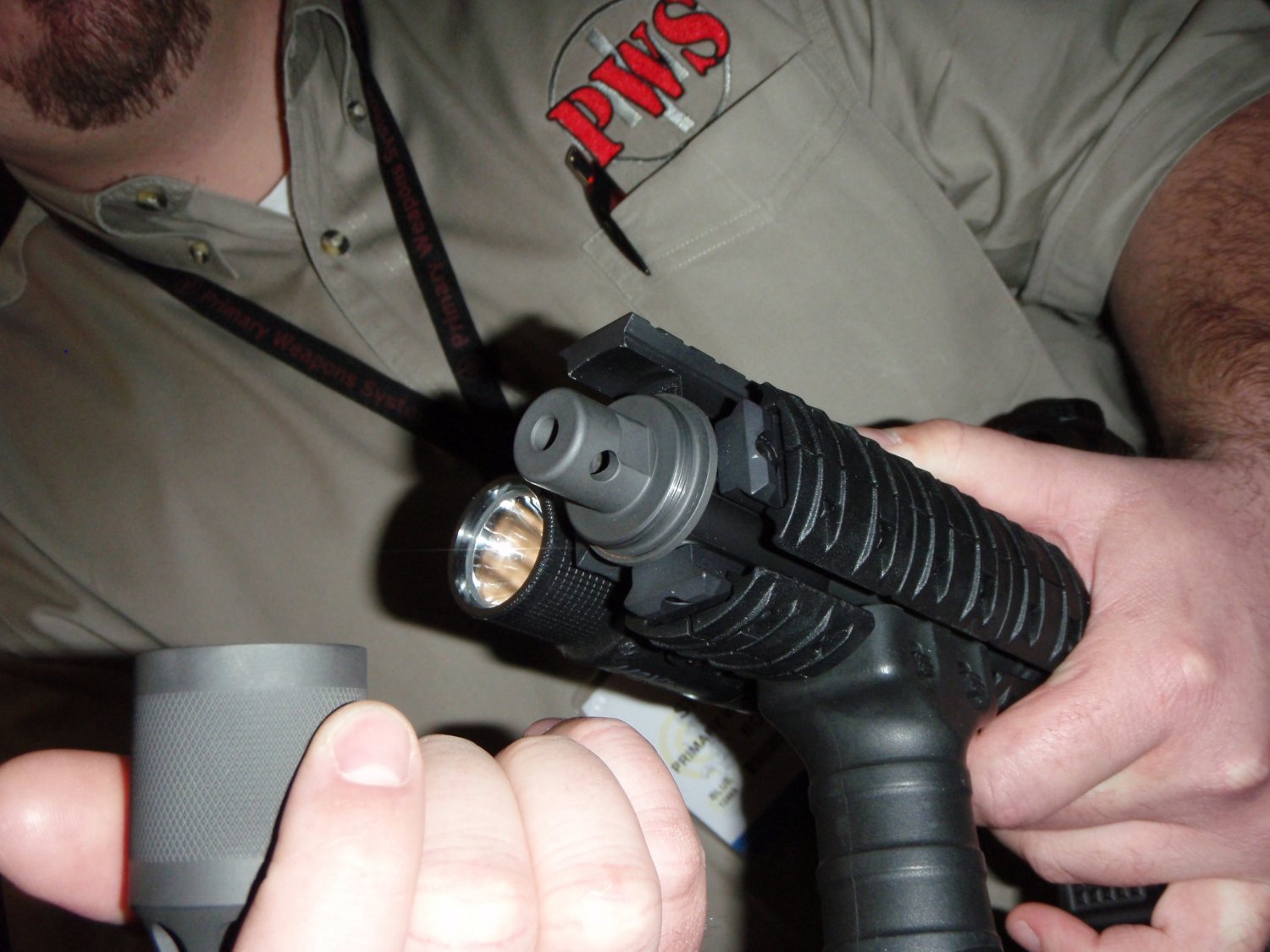 Crane: And this is with which one, the new one [Flash-Hiding Compensator]?

Nagy: With the new one, yeah.

Nagy: Yes. With the FSC (FSC556), the compensator that we’ve been marketing, which if you use that in an enclosed area, it’s like a flash-bang going off.

Nagy: Yes. So, that one, we have operators key-holing double-taps at 75 yards. This new compensator, with that short gun, you’re definitely gonna’ keep all of your rounds on the silhouette at 75 to100 yards.

Crane: Right. When you say a double-tap, you mean a semi-auto double-tap. 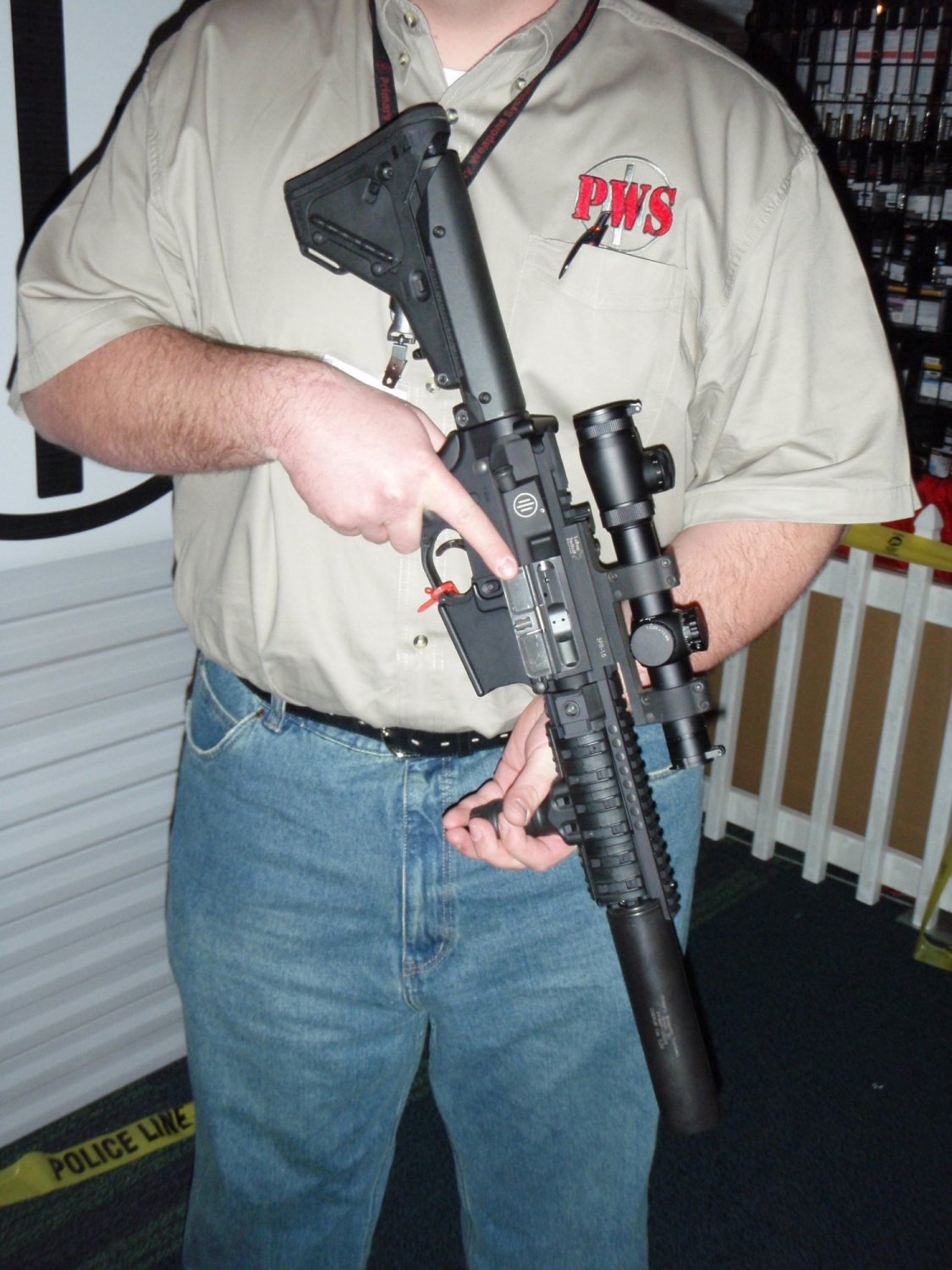 Crane: O.k. And how much does the new device [Flash-Hiding Compensator] compensate for flash, or hide flash, rather?

Nagy: Well, what I’ve been telling folks is that if we have an FSC one there, it’s about a 2 to 3-foot fireball. We have not been able to get this new compensator to burst at all. See, with a lot of SBR [Short-Barreled Rifle] flash hiders, you will still see it throw a lot of flame forward, once in a while. It’s because all the unprocessed powder’s building up, and eventually it ignites.

Nagy: So, with this, we haven’t seen that. We were seeing a lot of sparks, and we basically, uh, you’ve seen the compensator, correct?

Crane: I photographed it.

Nagy: For awhile, our test prototypes had the same tine design overall as our FSC series, so they came straight out, and looked kinda’ like the Vortex (Smith Enterprise Vortex flash suppressor/hider] that’s been out for a long, long time. 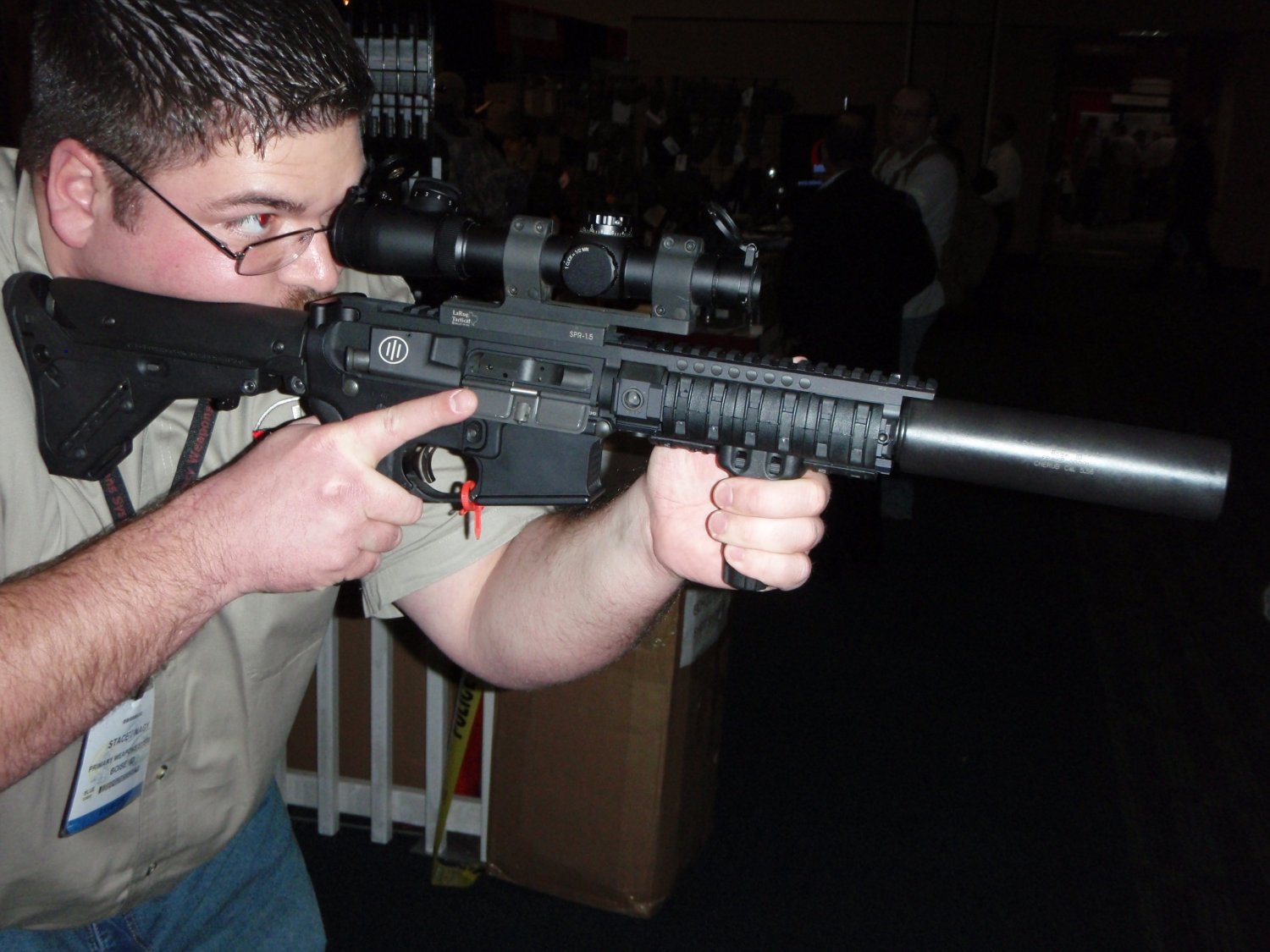 Nagy: So, with that design, we were getting a lot of sparks, little sparks comin’ out. So, we found out, just one of those trial-and-error things, that, hey, if we taper that down a little bit, we don’t…we still can’t explain it, we don’t know the exact physics behind it, but the sparks went away. So, what we were left with was about a 2 to 3-inch low-intensity flame comin’ out of the front of that device.

Nagy: When you compare it to any other SBR flash hider or an un-flash-hidden gun that’s that short, yes, it’s very, very much reduced.

Crane: Well how does it work…let’s say you put a Smith Vortex on the front of it, then what would happen?

Nagy: With a barrel that short, you have just so much unprocessed powder comin’ out of the end of it that it doesn’t matter if it’s a 4-prong [open-prong] flash hider, there’s still going to be a lot of visible flash. So, what we’ve done is there’s an enclosed chamber that basically starves that unprocessed powder of oxygen, so that when it does burn, there’s not enough oxygen available for it to really burst into a big, bright ball of fire. 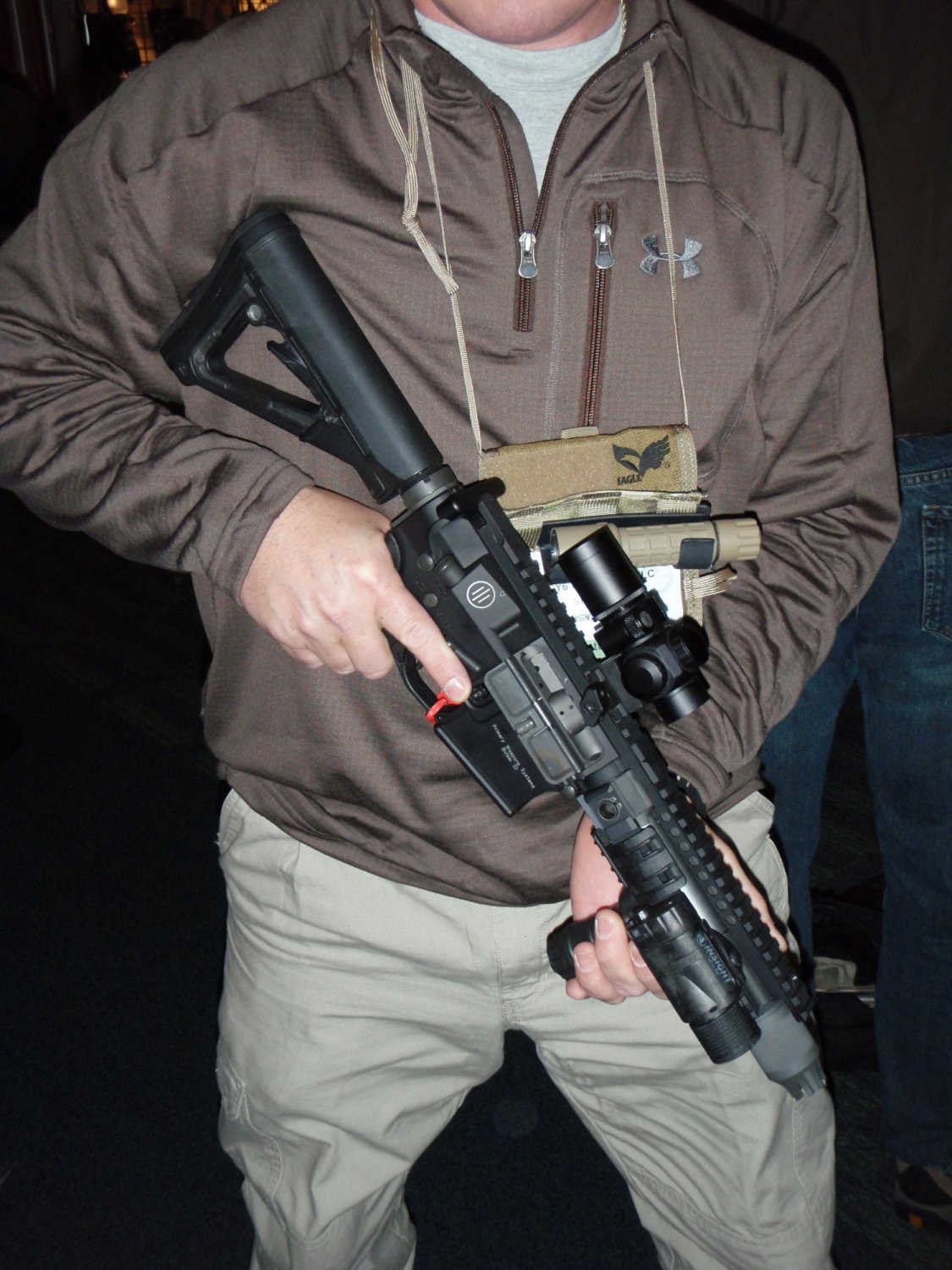 Crane: In other words, it’s an internal chamber that you can’t see.

Crane: O.k. And, what does it do to the sound, if anything?

Nagy: Noise is focused forward. Sound is the same as if it had no device at all.

Crane: So this thing doesn’t change the noise aspect of the weapon.

Nagey: That device and the effectiveness that we’ve displayed to date on video will be on the Diablo.

Crane: What do you think is important for me to say about the Diablo. Is there anything, specifically, that you’d like known about it or said about it?

Nagy: Uh, I guess the biggest thing to stress would be that it is made from the nicest components that we could purchase to put this thing together. Ya’ know, the Vltor MUR-1 upper (upper receiver), Lothar Walther barrel. I mean, we were really picky about what we [put] on this gun. And the other thing that kind of separates it from other really SBR’d ARs is that it actually has a usable rail system on it.

Nagy: Other piston-driven 7-inch ARs that I’ve seen floating around have like a 3-inch rail, where ours is closer in length to a carbine rail system, so you can actually put a vertical grip (vertical foregrip) on it and have it be a proper ergonomic distance away from the receiver, so you can get a good firing grip on the weapon. Also, the upper rail’s monolithic with the top of the MUR upper. I mean, it’s not one piece, but it’s so well-machined and properly-aligned that it practically should be monolithic. 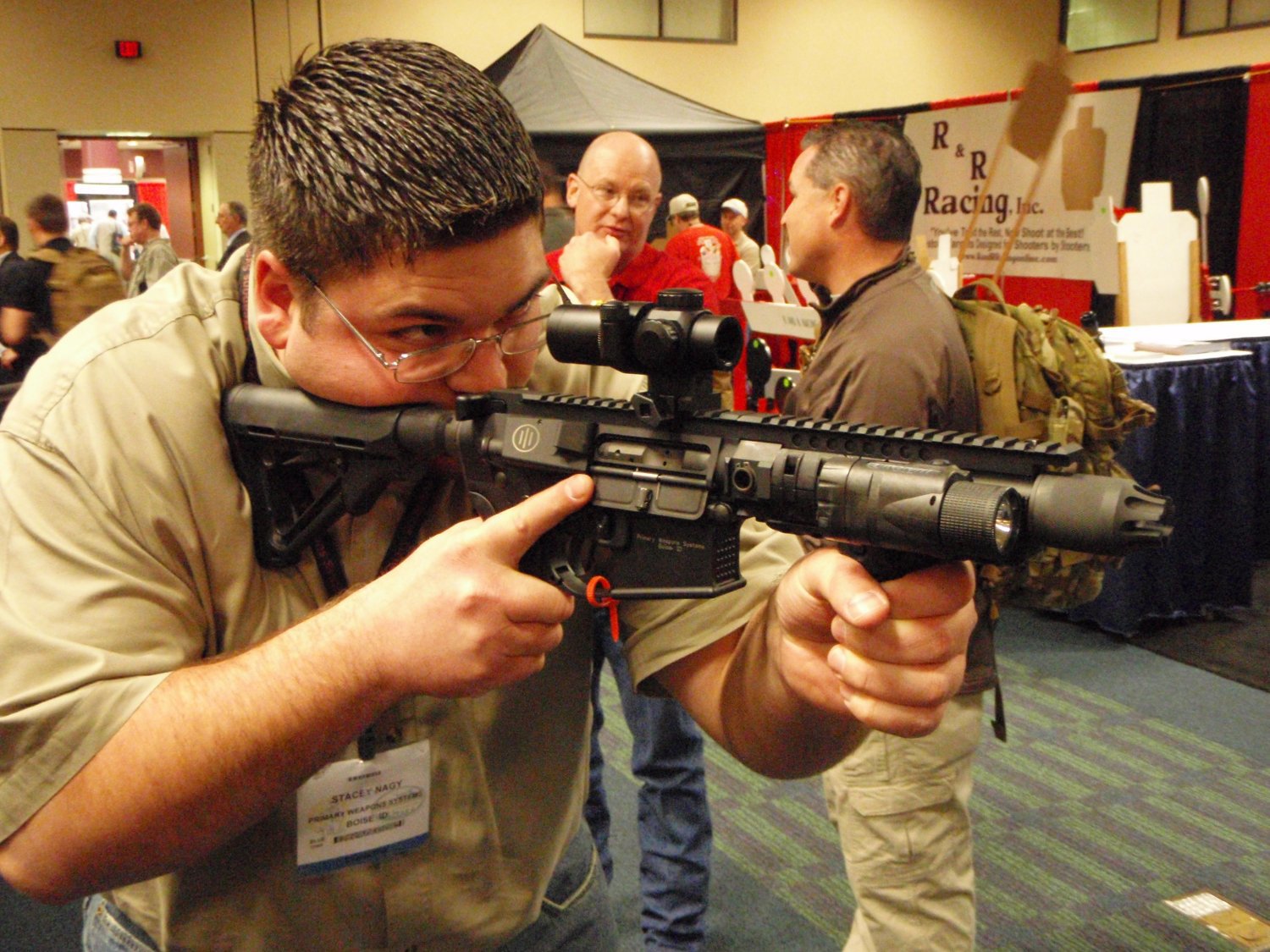 David Crane started publishing online in 2001. Since that time, governments, military organizations, Special Operators (i.e. professional trigger pullers), agencies, and civilian tactical shooters the world over have come to depend on Defense Review as the authoritative source of news and information on "the latest and greatest" in the field of military defense and tactical technology and hardware, including tactical firearms, ammunition, equipment, gear, and training.
Previous KAC BulletFlight Sniper App for M110 SASS-Mounted iPhone or iPod Touch
Next U.S. Army Recalls 16,000 Ceramic Body Armor Plates