On Feb. 1 (2008) during the exhibitor setup at SHOT Show 2008, DefenseReview was informed that Bushmaster Firearms would be manufacturing the MagPul Masada Adaptive Combat Weapon System (ACWS) a.k.a. MagPul Masada Rifle under the simplified name "Adaptive Combat Rifle", or "ACR", for short. So, we made made sure that we shot some photos of the newly-named ACR at the Bushmaster booth, located in the Law Enforcement and Military section, conveniently right next to the MagPul Industries Corp. booth. 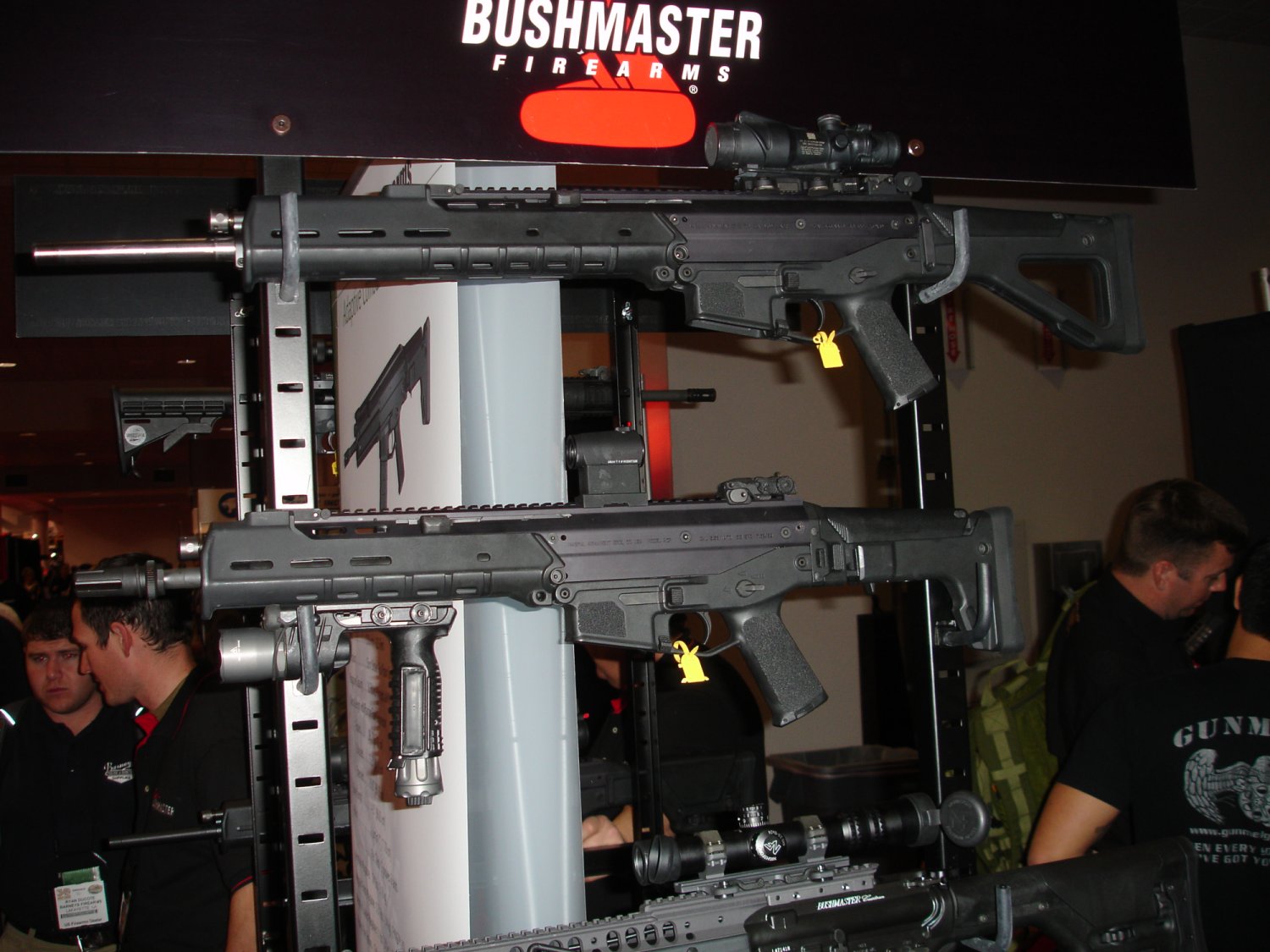 Bushmaster Adaptive Combat Rifle a.k.a. Bushmaster ACR, but all this information is already available in Bushmaster’s press release on the strategic teaming. So, here it is (Bushmaster Press Release):

Bushmaster and Magpul Team to Bring Advanced Rifle to Market

The Bushmaster ACR (Adaptive Combat Rifle) will initially be offered
in 5.56 NATO, available for law enforcement and civilian purchase
second quarter 2008. This release will be followed by military ACR
versions in the 3rd quarter of 2008.

"The opportunity to partner with such an innovative company as Magpul,
is a very exciting step in the growth and evolution of Bushmaster’s
product line." said Chad Brooks, CEO of Bushmaster Firearms
International, LLC.

Without government funding or outside influence of any kind, the
Masada concept was developed from scratch in Boulder, Colorado by
Magpul’s Design Group. The initial Masada concept was first shown
publicly at the 2007 Shot Show and its success prompted Magpul to
spend a year redesigning the system for production.

Richard Fitzpatrick, CEO Magpul, said, "As the design progressed, we
began to realize we needed to find a partner who shared our vision,
and could drive production at a suitable volume without sacrificing
quality. We entertained a number of ideas and offers, but in the end,
a partnership with Bushmaster was the logical choice. Their production
capabilities, distribution network, and brand name were the best match
for our goal of getting this rifle into civilian, law enforcement, and
military hands." 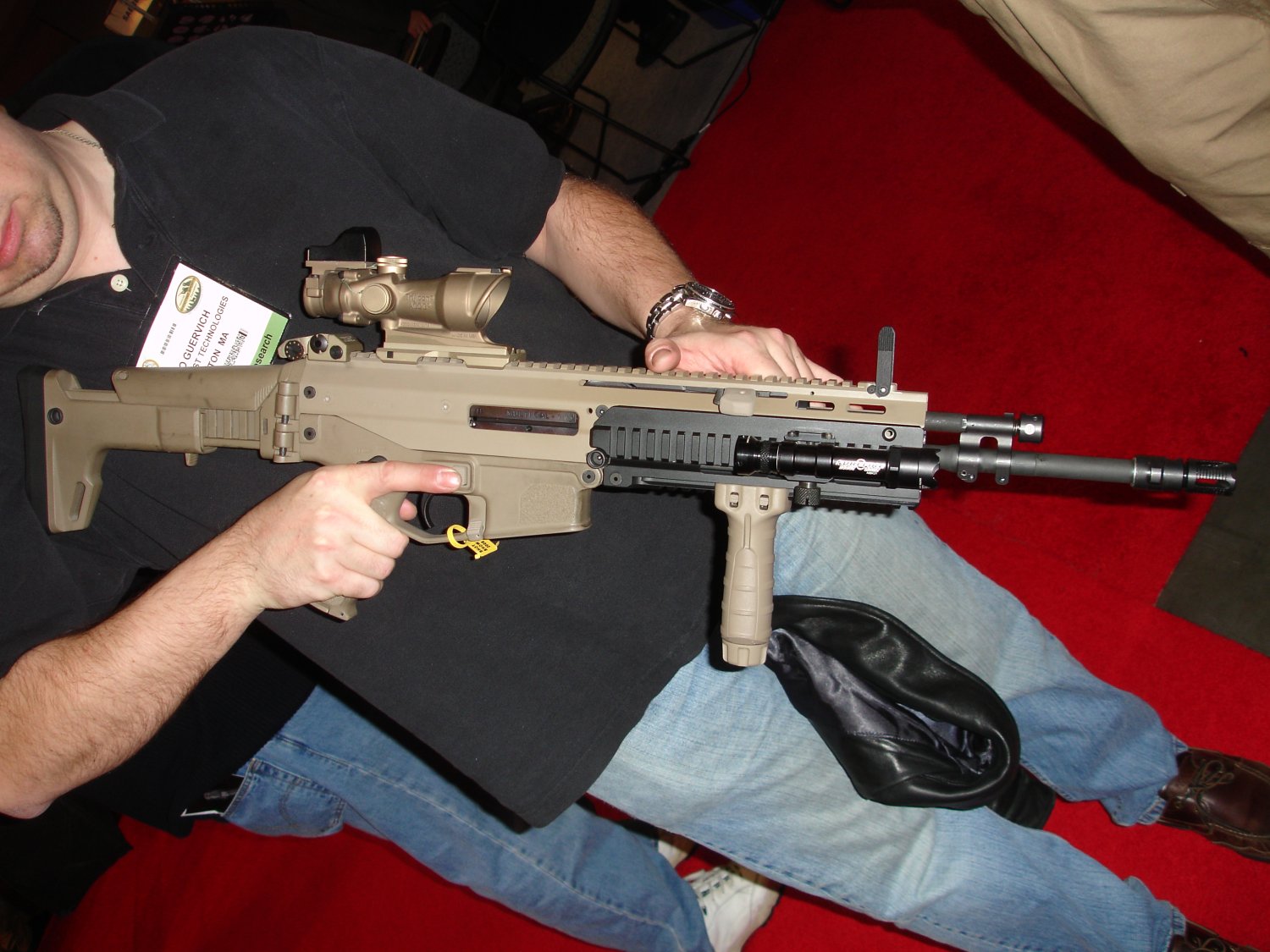 The result is the ACR (Adaptive Combat Rifle) which keeps the
fundamentals of the Masada concept with added advanced features such
as firing pin block and true ambidextrous charging handle.

The ACR will be available for hands on viewing in the Bushmaster and
Magpul booths in the Law Enforcement section at SHOT Show 2008, in Las
Vegas, Nevada. Among the ACR’s key features are a gas piston operating
system, tool-less quick change barrel, multi-adjustable folding stock
with integrated storage, and backward compatibility with a number of
AR15/M16 parts. Due to similar operating controls, user transition
from the M16 series of weapons is easily facilitated with minimal
re-training.

The Bushmaster ACR will initially be available in 3 SKUS: Standard
Carbine with fixed stock, Entry Carbine with folding stock, and
Special Purpose Rifle with Precision Rifle Stock. Live fire
demonstration and test and evaluations beginning in the end of March
to qualified law enforcement and federal government agencies.

Bushmaster Firearms International, LLC (BFI) is the leading supplier
of AR15/M16 type rifles in the United States for Law Enforcement,
Public and Private Security and Safety applications, as well as
consumer use. Headquartered in Windham, Maine – with additional
facilities in Dallas, Georgia and Lake Havasu, Arizona, BFI supplies
both Aluminum and advanced Carbon Fiber based rifle platforms in
calibers ranging from 5.56mm/.223 to .50BMG, as well as associated
accessories, to it’s US customer base, in addition to Law Enforcement,
Security and Military customers in over 50 countries around the world. 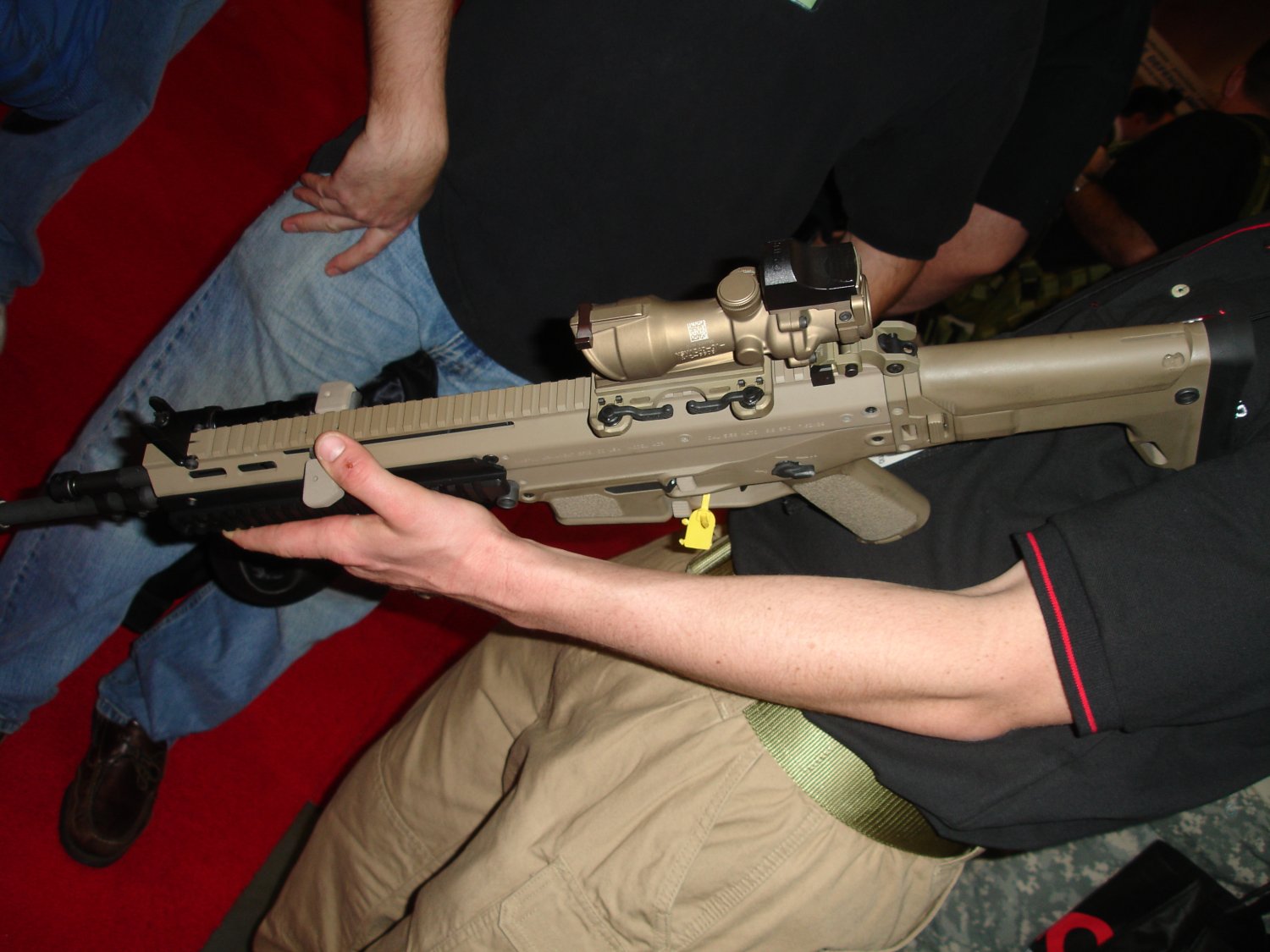 Magpul Industries Corp is a privately held Colorado corporation,
founded in 1999 by a former U.S. Reconnaissance
Marine Sergeant Richard Fitzpatrick. Magpul is named after its
original product, an item to improve the speed of tactical magazine
changes. The resulting patented product, the Magpul, has over one
million units fielded worldwide and is in service with many military
and law enforcement agencies. Magpul is notable in the industry as a
company that focuses on the end user of an item and self-funds its
product development outside of normal government solicitations.

From the success of the original design came other tactical
accessories such as stocks, grips, a polymer AR15/M16 magazine and
other complete weapon systems. 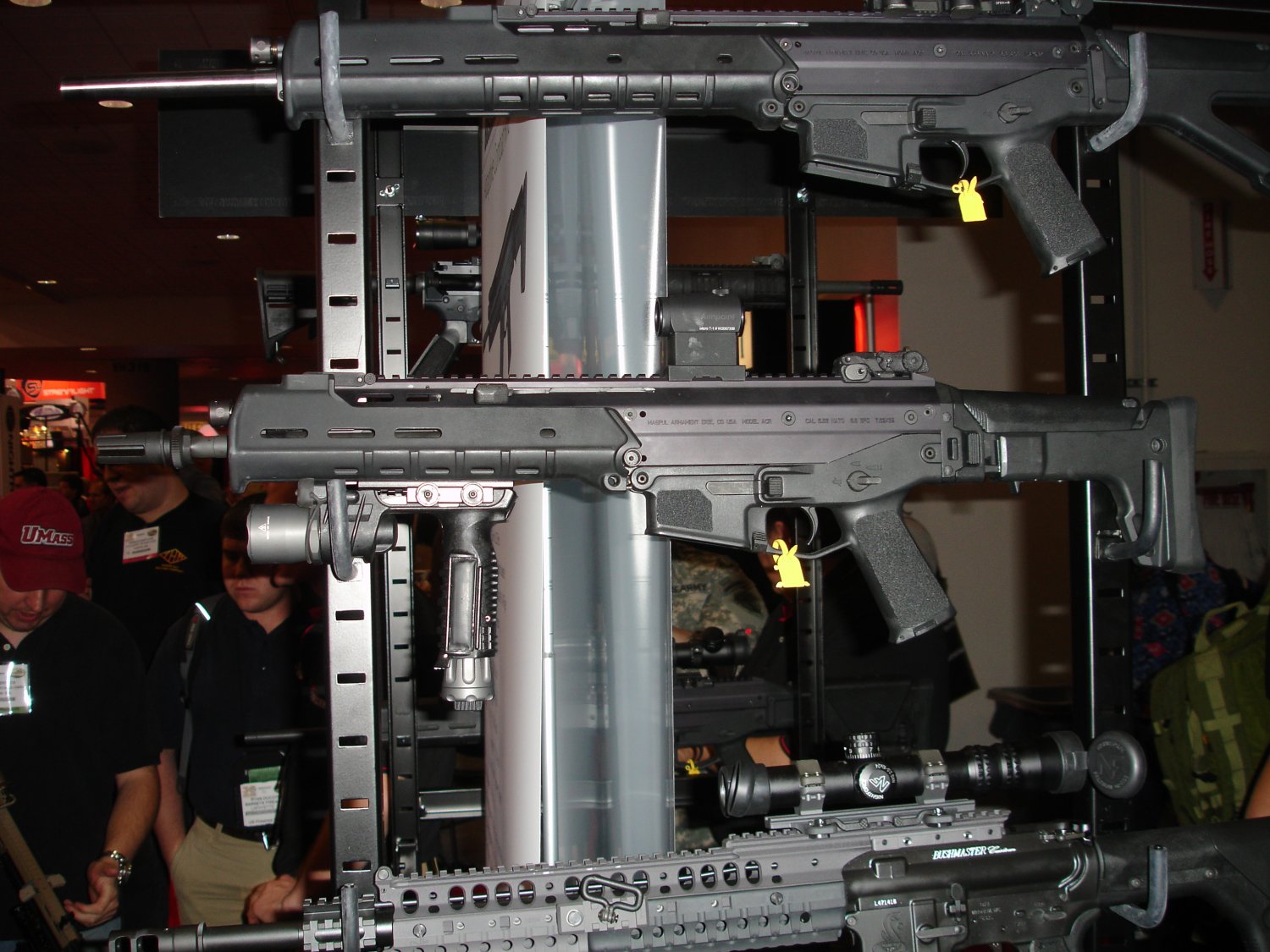 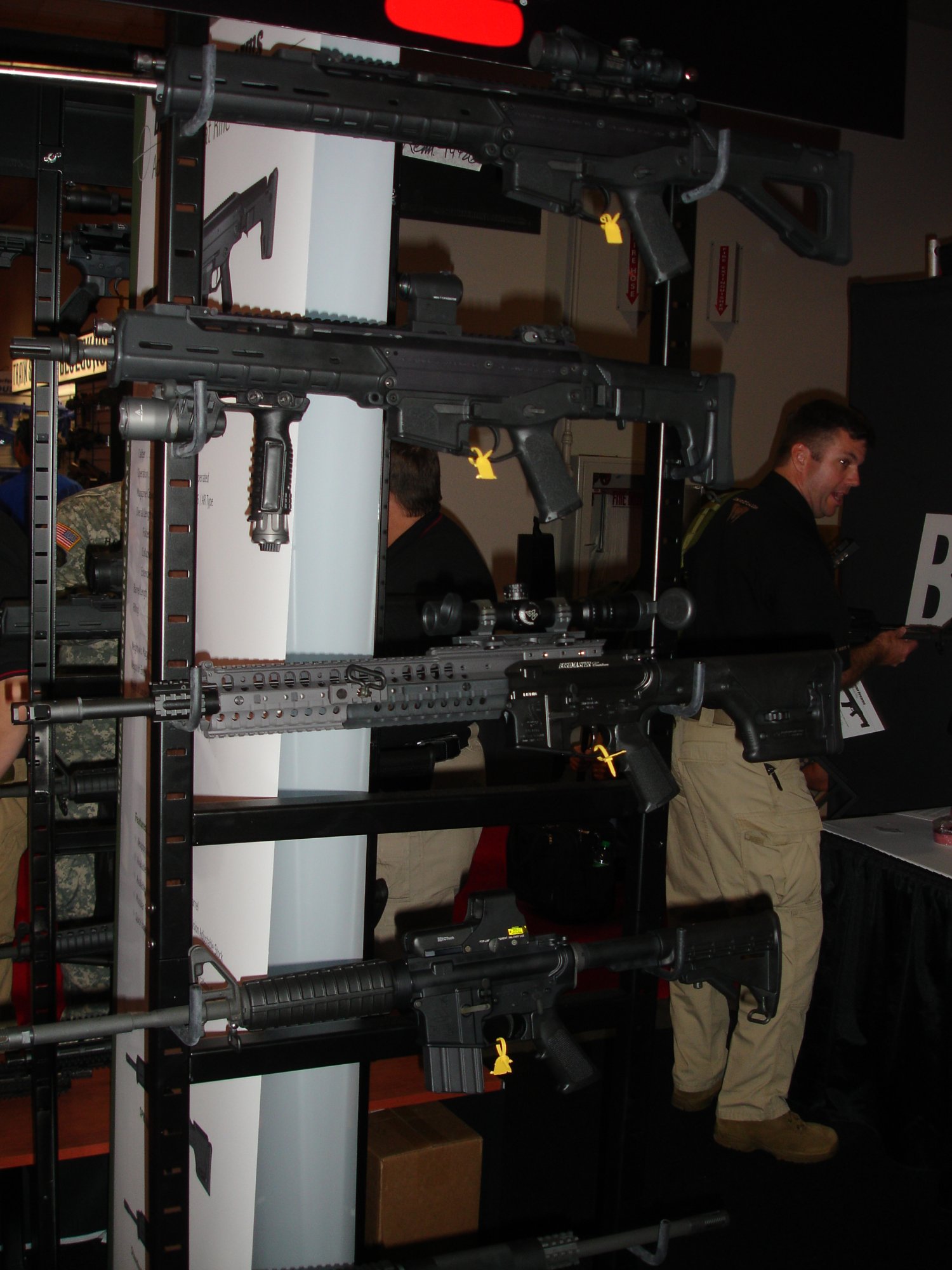