This article contains pics of the FN P90 Personal Defense Weapon being fired at the Heckler & Koch/Louden County Sheriff’s range. (Pics are at bottom of this story):

Back in 2001, DefRev published this story on the FN P90 PDW. However, we never published our range report on it.

The following brief range report on the FN P90 PDW and FN Five-Seven Pistol was written by David Crane:

My favorite weapon at the event (TREXPO East 2001) was, hands down, FN’s P90 PDW (Personal Defense Weapon). The gun was reliable, very light with a full 50 rd magazine, and was easily kept on target during full auto strings. On full-auto, I was able to… 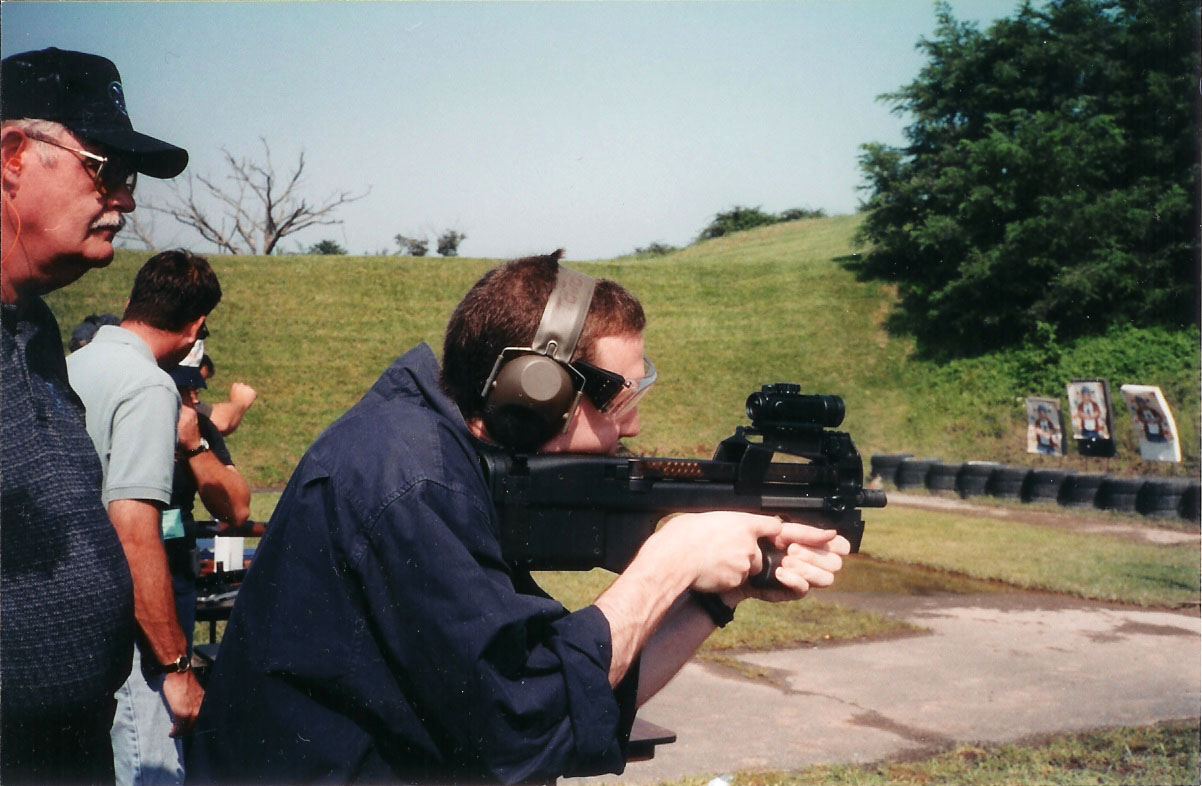 keep the reticle on the target the entire time, even when firing a 30 round string. This was impressive! FN’s factory reticle was o.k., but I much preferred the version FN had set up with an non-factory red dot sight. The red dot just gave me a much quicker and easier picture. DefRev found the FN P90 PDW to be combat accurate at CQB (Close Quarters Battle) distances.

That said, the P90 does cause me some concern. The primary concern I have regarding the P90 (besides whether or not the 5.7x28mm rounds can become jumbled inside a partially loaded magazine when it’s dropped) is how fast can the 5.7x28mm round stop a hostile threat. It’s great that it can defeat CRISAT body armor at 200 meters (distance unconfirmed), but how many rounds will it take to put an angry and determined advancing adversary on the pavement at CQB (Close Quarters Battle) range? DefRev alluded to the stopping power issue our previous article on the FN P90 PDW, but we didn’t go into it in depth. Truth is, we’re still not yet convinced that the 5.7x28mm cartridge has any more lethality/stopping power than a .22 Magnum. We hope it does. One nice thing about the P90 is that it has a relatively high cyclic rate (900 rpm), so you can pepper a target with a lot of rounds quickly. The weapon’s controllability on full-auto is what allows this. 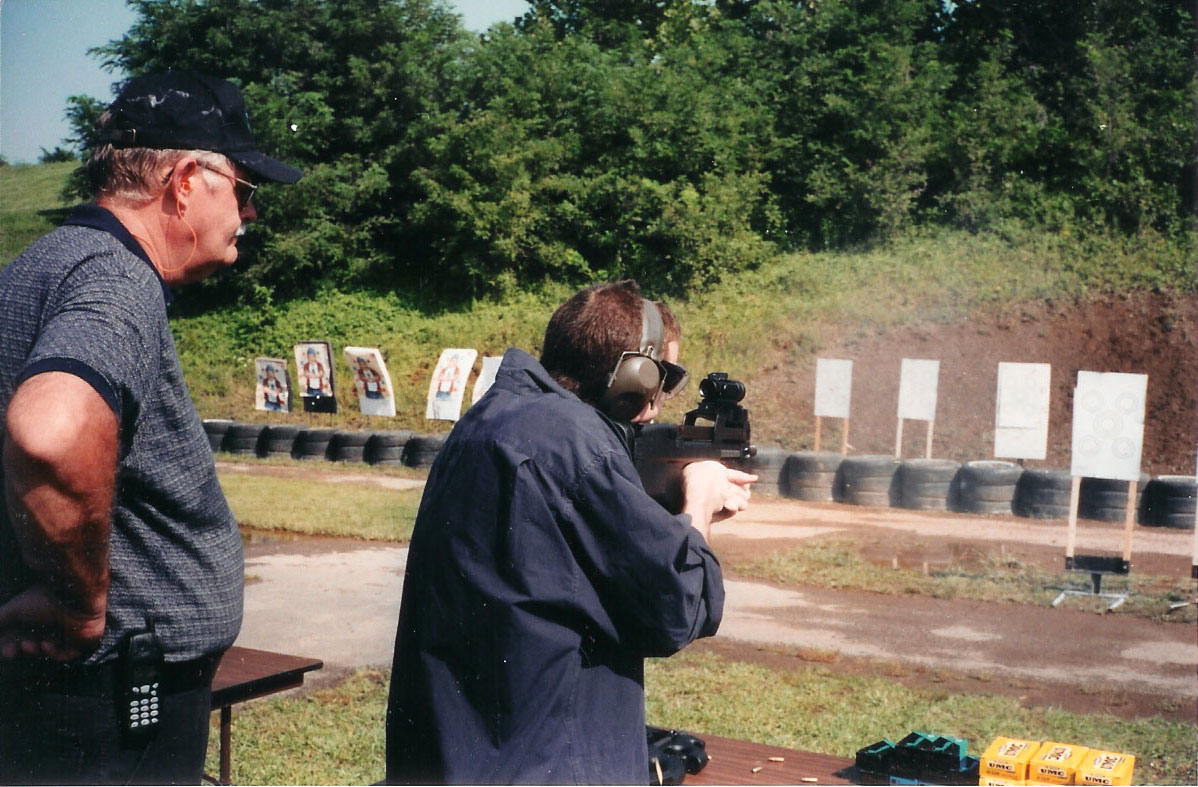 It should be noted that the rumor about the FN P90’s magazine (that the ammo can get jumbled up inside the magazine, if the magazine is partially loaded and the weapon is dropped, or if the partially-loaded magazine dropped by itself, and hits the ground hard enough) is, so far, unsubstantiated. An FNH USA company official I spoke with at SHOT Show 2002 denied the validity of the rumor.

While I was at the HK/Louden County Sheriff’s range, I also got to shoot the tactical version of the FiveseveN pistol. This gun shot nicely, but I still believe there is some room for improvement on the trigger. It could be a little crisper/less mushy. Also, I think that Novak sights would be a better choice than the factory sights. However, with 20 rounds of 5.7mm AP (armor-piercing) ammo at one’s immediate disposal, how much can one really complain? Recoil was negligible–less than my Glock 19 9mm–and the gun was reliable and combat accurate. 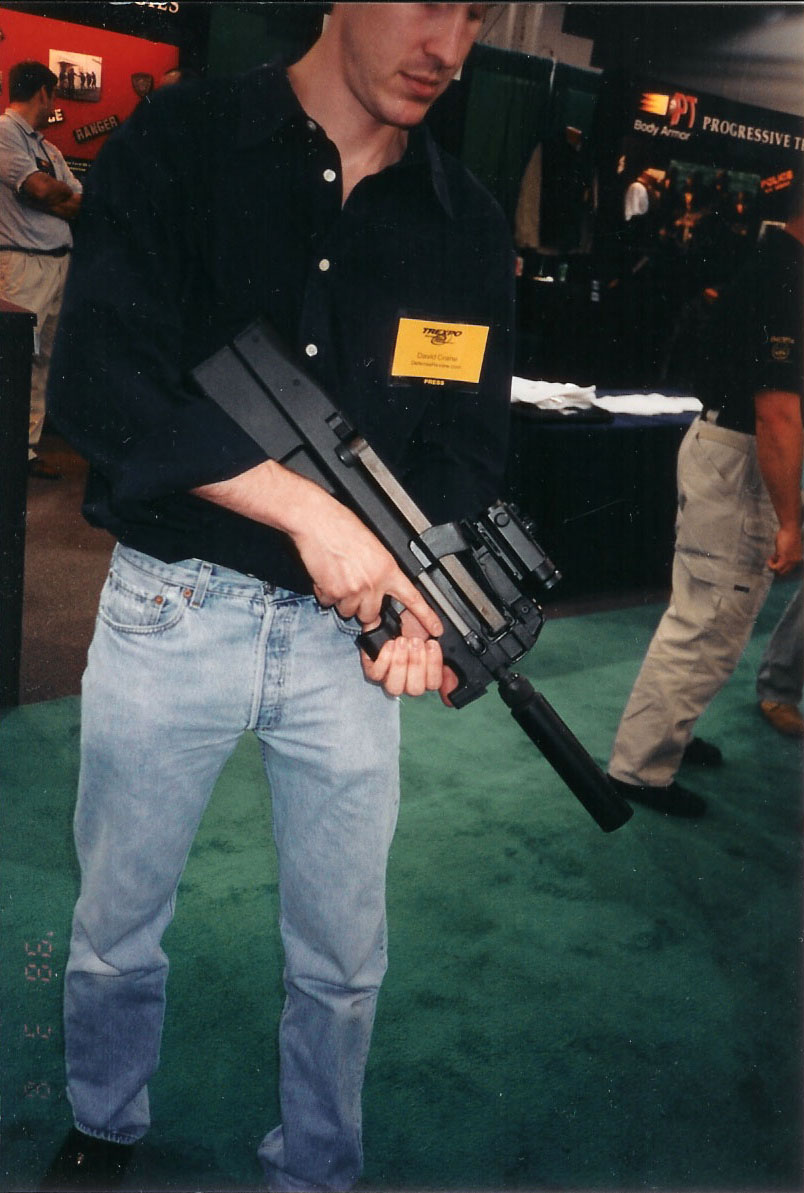 Another pic of FN P90 PDW being fired.

David Crane started publishing online in 2001. Since that time, governments, military organizations, Special Operators (i.e. professional trigger pullers), agencies, and civilian tactical shooters the world over have come to depend on Defense Review as the authoritative source of news and information on "the latest and greatest" in the field of military defense and tactical technology and hardware, including tactical firearms, ammunition, equipment, gear, and training.
Previous MK47 Striker ALGL (Advanced Lightweight Grenade Launcher): 40mm of the Future?
Next Hatch Operator Tactical Gloves: Anti-Cut, Anti-Heat.