This article contains digital pics of M16 Clinic’s M16 Viper and M16 Viper-XRP 5.56mm subcarbines/SBRs (Short-Barreled Rifles), as well as a link to exclusive video footage of the M16 Viper 5.56mm subcarbine/SBR being test-fired/demo’d in "the Sandbox".  It has also been updated with new M16 Clinic phone contact information as of 6/15/06.
I recently wrote about the predominance of AR-15/M16-variant 5.56x45mm subcarbines in military PSD (Personal Security Detachment/Detail), i.e. military and private military Security Operator circles, in "Part 1" of my Military.com SoldierTech article, titled "SMALL PACKAGES, BIG BANG: Personal Defense Weapons". Well, if you’re currently a private military Security Operator involved in military PSD work, or involved in any type of Special Operations being conducted by a private military company (PMC), you might want to take a good hard look at the M16 Viper and M16 Viper-XRP (eXtra-Range/Perimeter) select-fire 5.56x45mm subcarbines/SBRs being custom-built by M16 Clinic. Both versions are built by hand, tuned, and test-fired, one at a time, before leaving the shop, and are reportedly real runners. Both also come standard-equipped with in-house-developed M1913 Picatinny rail systems/forend rail tubes.
The M16 Viper select-fire subcarbine/SBR (Short-Barreled Rifle) sports a 7.375-inch (7 3/8") barrel, so it’s ideal for close-in work/CQB (Close Quarters Battle) and Diplomatic Security work (especially vehicle/motorcade deployment). At an OA length of only 24" (with stock in retracted position), it can be…
easily carried, concealed under a jacket, deployed and/or maneuvered quickly in confined spaces (like hallways/corridors), and manipulated/maneuvered effectively inside a moving vehicle. According to Greg Leaf, M16 Clinic’s CEO, the M16 Viper 5.56mm subcarbine achieves a muzzle velocity of 2400+ fps (feet-per-second) for NATO M855 ball ammo (62gr 5.56x45mm), and it will shoot 1 MOA at 150 meters. Cyclic rate-of-fire (ROF) for the M16 Viper is 720-750 rpm (rounds-per-minute). 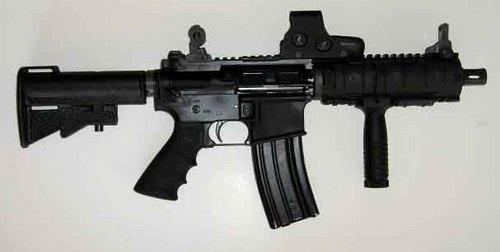 M16 Clinic’s M16 Viper-XRP (eXtra-Range/Perimeter) 5.56x45mm subcarbine with in-house M1913 Picatinny rail system/forend rail tube and Trijicon ACOG optical gunsight attached.
The M16 Viper-XRP’s (eXtra-Range/Perimeter) barrel measures 11.5 inches long. This version of the M16 Viper is designed primarily for perimeter security work and any application where an operator might need to "reach out and touch someone" at up to 300 yards engagement distance. Muzzle velocity for NATO M855 ball ammo out of the M16 XRP is roughly 2650 fps. The XRP features a proportionally-longer in-house M1913 Picatinny rail system/forend rail tube than that of the standard M16 Viper. The M16-XRP’s cyclic rate-of-fire (ROF) is roughly the same as the standard M16 Viper’s.
All M16 Clinic components are cryogenically treated for maximum durability, and carry a lifetime guarantee.
Military Special Operations personnel and law enforcement SWAT/SRT operators should also consider these weapons for their respective arsenals. However, they’re expensive, and most likely outside the budget of most local SWAT/SRT units and police departments. If you’re interested in acquiring a complete M16 Viper upper receiver with Mil-Std-1913 rail system/forend rail tube manufactured specifically to M16 Clinic’s exacting specifications or an M16 Viper-XRP, you’ll have to call for pricing (505-891-0282).  A complete M16 Viper with all M16 Clinic components (including a cryogenically-treated AR-15/M16 lower receiver available at Brownells) will cost a bit extra, and a complete M16 Viper-XRP will probably cost even more.   ICONUS (Inside the Continental United States) and OCONUS (Outside the Continental United States) pricing may differ.
M16 Clinic can be contacted by phone at 505-891-0282, or via email at [email protected]. Ask for Greg Leaf.
M16 Clinic does not provide complete weapons or lower receivers, only complete uppers and/or components parts. If you’d like to purchase a cryogenically-treated AR-15/M16 variant lower receiver, DefenseReview suggests that you contact Brownells by phone at 641-623-5401, or toll-free at 800-741-0015.
M16 Clinic was recently contacted by two separate high-level U.S. military Special Operations (SPECOPS) units. Both units requested a live-fire M16 Viper and M16 Viper-XRP demo.
Now, to the M16 Viper "Sandbox" demo video clip:
Important Instructions for Downloading and Playing M16 Viper Video: If you’d like to see the M16 Viper 5.56x45mm subcarbine live-fire-demo video clip, please follow these steps, to the letter : 1) Right-click on the link to the video. 2) Left-click on "Save Target As…" inside the box that pops open to save the video to your "Desktop" or area of choice. 3) Once download is complete and the video file is sitting on your desktop, try either left-clicking or double-clicking on the file. If that doesn’t work, right-click on the file icon and then left-click on "Play" inside the box that’s opened up. This should automatically launch your Microsoft Windows Media player so you can watch the video you’ve downloaded(at this time, we’re not sure that Apple users will be able to view it). Remember, you must right-click on the link below to download the video, rather than just opening it.
Video Clip: Right-Click here to download exclusive video footage of the M16 Viper Subcarbine being test-fired in "the Sandbox" (an undisclosed location OCONUS).
Click here to visit the M16 Viper and M16 Viper-XRP (eXtra-Range/Perimeter) 5.56mm SBR/subcarbine page. This page contains digital pics of both the M16 Viper and M16 Viper-XRP.
Click here to view a digital pic of M16 Clinic’s M16 Viper-XRP (eXtra-Range/Perimeter) 5.56mm subcarbine with Trijicon ACOG optical gunsight attached.
Click here to read a M16 Viper subcarbine testimonial letter written by Sgt. Frank Atkinson of the Monroe County Sheriff’s Office (Monroe County, Michigan) to the NTOA (National Tactical Officers Association). The Monroe County Sherrif’s office can be contacted by phone at 734-240-7409.
Click here to read testimonials on the M16 Viper 5.56 subcarbine.
It should be noted that the M16 Clinic also makes something called the "M16 Cobra Carrier Key Reamer", or "M16 Cobra Bolt Carrier Key Reamer", which is a precision-fitted dual reamer for AR-15/M16 bolt carrier key. This tool is designed to prevent excessive carbon build-up on the internal shoulder of the bolt carrier’s key. The link below will tell you all about it:
http://www.m16clinic.com/cobra.htm
Military.com SoldierTech is a DefenseReview.com content partner.
Author’s Note: If you’re looking for high-quality ammo to feed your M16 Viper, or any other select-fire or semi-auto-only firearm/small arm, for that matter, DefenseReview highly recommends Black Hills Ammunition. You can contact them by phone at 605-348-5150.
Black Hills Ammunition is the sole source supplier of the MK262 MOD 1 5.56x45mm cartridge, which utilizes a 77-grain Open-Tip Match (OTM) bullet. The Black Hills MK262 MOD 1 is currently being employed by U.S. Military SOCOM/Special Operations Forces (SOF) personnel in-theater (in the "Sandbox").

Click on this link to read the latest article on the M16 Viper-Series weapons, titled, M16 Viper-Series: Custom 5.56mm Weapons Packages for Special Ops (Video!), which was published on June 26, 2006. This article contains new M16 Clinic video clips of the M16 Viper subcarbine/SBR and M16 Sniper Viper rifle/carbine in action.

David Crane started publishing online in 2001. Since that time, governments, military organizations, Special Operators (i.e. professional trigger pullers), agencies, and civilian tactical shooters the world over have come to depend on Defense Review as the authoritative source of news and information on "the latest and greatest" in the field of military defense and tactical technology and hardware, including tactical firearms, ammunition, equipment, gear, and training.
Previous Military.com SoldierTech Article: ”ITCHY TRIGGER FINGER: NewMatics PM16 Rifle”
Next Revolutionary Flexible Anti-Rifle Body Armor for Security Operators and SPECOPS