We continue now with some of the "latest and greatest" tactical technology from SHOT Show 2007, which took place at the Orange County Convention Center (OCCC) in sunny Orlando, Florida:

1) The new Smith and Wesson Military and Police .45 (S&W M&P45) .45 ACP pistol was on display, and the gun looked good. DefenseReview readers may remember that this was Smith & Wesson’s entry in the USSOCOM (a.k.a. SOCOM) Joint Combat Pistol program which later became the Combat Pistol program, before it was subsequently cancelled. The M&P45 went head-to-head against the HK45 .45 ACP pistol and several other contenders in the competition.

Chris Corino showed us the new gun at the Smith and Wesson booth, and… 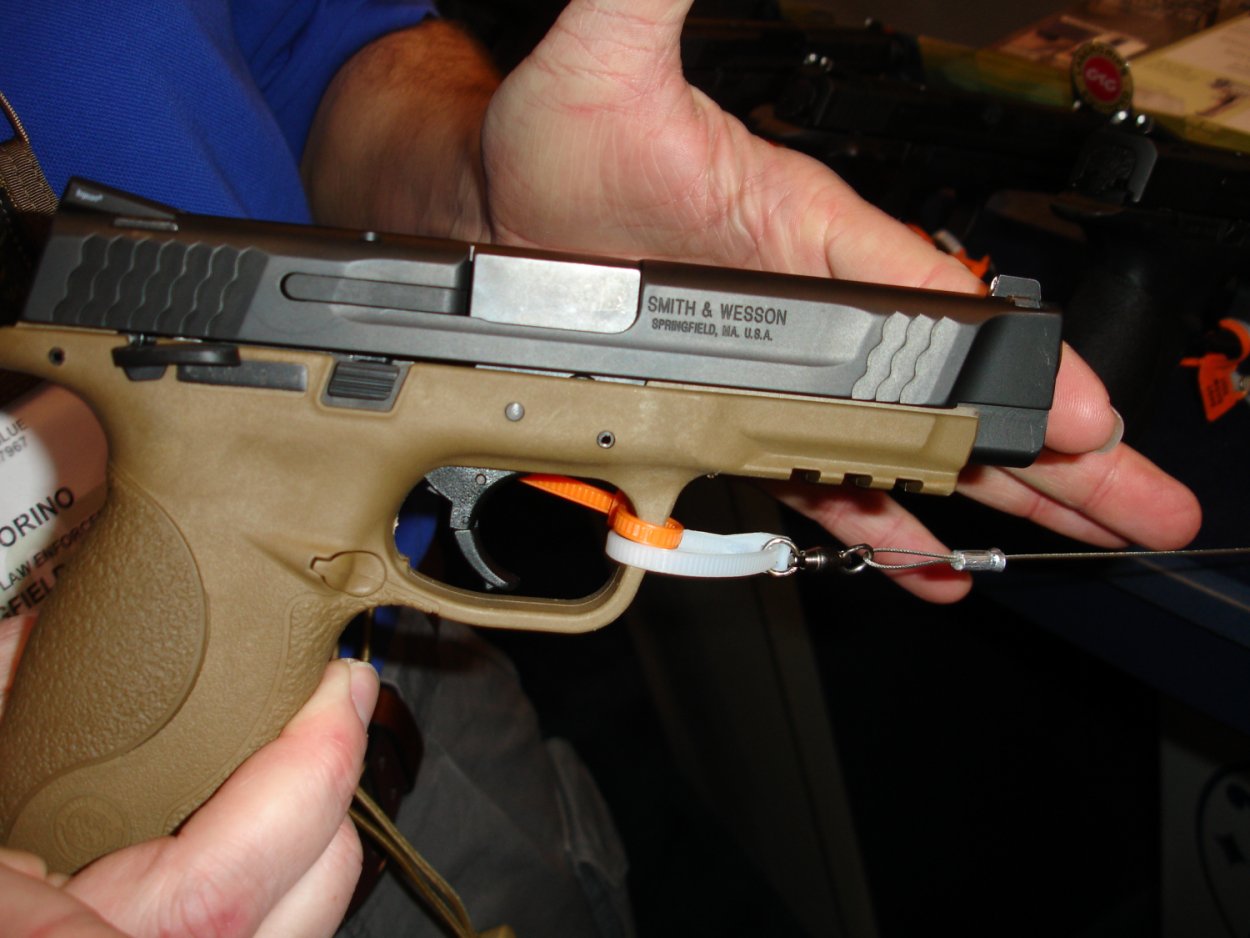 made a point of demonstrating the ability to perform a chamber check / safety check with the M&P45’s M1911-style frame-mounted sweep-down safety in the "On" position. DefenseReview found the Smith & Wesson M&P45 pistol (a.k.a. S&W M&P .45 pistol) to be just as comfortable in the hand as previous versions of the weapon. It wasn’t too large for our hands.

DefenseReview likes the fact that the operator can go "cocked and locked" with the M&P45 pistol. This is how it should be.

2) While we’re on the subject of the S&W M&P45 pistol, we should also mention that Heckler & Koch Defense, Inc. (HK Defense, Inc.) had the HK45 and HK45 Compact (HK45C) pistols on display at their booth. Both guns looked good, and felt good in the hand. However, we still haven’t gotten either pistol to the range yet, so we can’t sign off on them, yet. 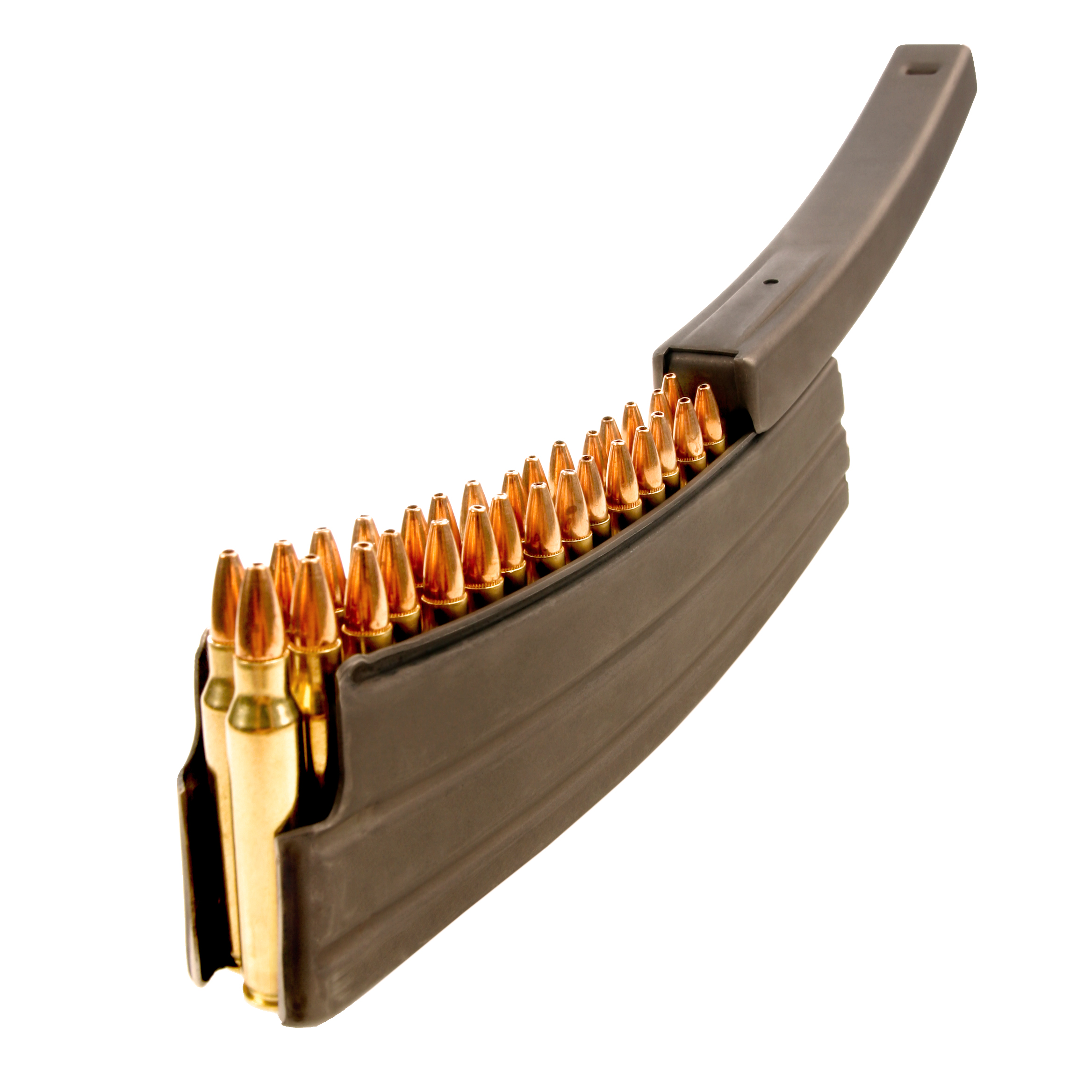 3) Cammenga Corp. had a really slick quick-load AR-15/M16 (4179 STANAG NATO) box magazine (5.56x45mm/.223 Rem.) called the EASYMAG, which allows a shooter to load and unload the magazine in seconds. The entire front section of the Cammenga EASYMAG slides down (and up), so the shooter can just dump the ammo in and out. When the front section is closed, it locks up tight. The EasyMag also sports an anti-tilt follower to help avoid feeding malfunctions. The Cammenga EasyMag has nickel-boron (NiB) coating/plating to reduce friction, wear, and corrosion. The EasyMag should be available by March 2007.

This page contains a link to a Flash video on the Cammenga EasyMag.

This page contains a link to a Flash video on the Cammenga EasyLoader.

Cammenga also has a rubberized polymer Dust Cover for AR-15/M16-variant rifles (4179 STANAG NATO magwell) designed assist in keeping dust, dirt, sand, and any/all other contaminants out of the weapon when no magazine is in place.

Right-Click here and then click on "Save Link As" (Mozilla Firefox) or "Save Target As" (Microsoft Internet Explorer) to download and view a PDF-format press release on the Cammenga EASYMAG, EASYLOADER, and Dust Cover. 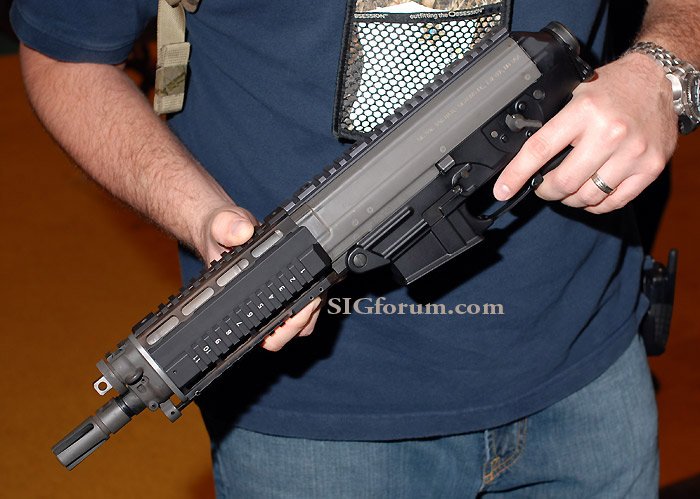 4) SIGARMS had their semi-auto-only SIG 556 Pistol, which is the stockless SBR-style pistol version of the standard SIG 556 semi-auto-only rifle / carbine. DefenseReview photographed the SIG 556 rifle/carbine at SHOT 2006.

Defense Review doesn’t yet know if SIGARMS will be offering the SIG 556 Pistol to civilians, or if so, when it would be released.

Note: The SIG 556 Pistol photo shown in this article was taken by "parabellum" at SIGforum, and first posted on this thread.

The Kel-Tec RFB is a gas-operated semi-auto-only rifle with ambidextrous controls, a reciprocating charging handle (cocking handle) that can be switched to either side, and a Mil-Std-1913 top rail attached rigidly to the barrel. A free-floating four-sided Mil-Std-1913 rail system / forend rail tube can also be attached to the barrel. The RFB accepts standard FN FAL-type magazines. The adjustable trigger mechanism has five "individual adjustment parameters." Barrel lengths of 18 inches (18"), 24 inches (24") and 32 inches (32") are currently available. Twist rates are 10" or 11.25".

David Crane started publishing online in 2001. Since that time, governments, military organizations, Special Operators (i.e. professional trigger pullers), agencies, and civilian tactical shooters the world over have come to depend on Defense Review as the authoritative source of news and information on "the latest and greatest" in the field of military defense and tactical technology and hardware, including tactical firearms, ammunition, equipment, gear, and training.
Previous MagPul Masada Adaptive Combat Weapon System (ACWS) Makes Its Debut
Next Latest Advanced Armament Corp. (AAC) Silencers for Tactical Firearms (Photos!)