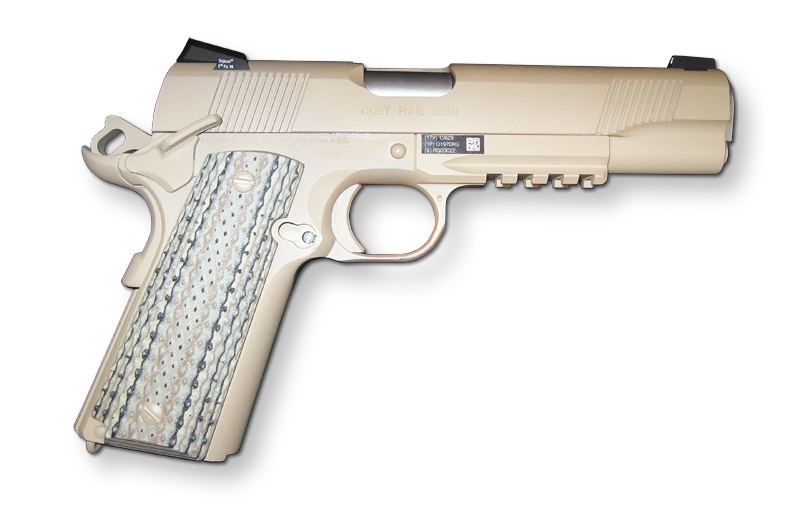 What's old is new again, and we're back to the future. Colt Defense LLC announced on Friday that it had secured an Indefinite-Delivery/Indefinite-Quantity contract for up to $22.5 million and 12,000 M45 Close Quarter Battle Pistol (M45 CQBP) 1911 pistols with the U.S. Marine Corps, specifically for Marine Force Recon and MARSOC elements.

So, in an era in which high-tech striker-fired and hammer-fired, polymer-frame high-capacity pistols like the Glock, Smith & Wesson (S&W) M&P, Springfield Armory XD/XDM, and Heckler & Koch pistols may represent the current state-of-the-art, the Marines have decided to stick with a 101-year old combat/battle-proven warhorse with a single-stack mag (magazine), albeit in a modernized/updated format with superior controls.

Those Marines do like their .45s, and frankly, who doesn't? The .45 ACP cartridge rocks, and if a 1911 pistol is reliable, nothing shoots better.

Here's the original press release on it:

Colt Defense LLC has been awarded an Indefinite-Delivery/Indefinite-Quantity contract by the U. S. Marine Corps for up to 12,000 M45 Close Quarter Battle Pistols, plus spares and logistical support. The new CQBP is a direct descendant of the iconic Colt M1911 adopted by the U. S. military in 1911 and carried as the primary sidearm through all the major conflicts of the 20th century.

The CQBP contract is for a five year period and has a potential value of up to $22.5 million. The CQBP expands on a long history of MARCORSYSCOM re-building original Government-issue 1911s, primarily for use by Force Recon and MARSOC units.

“This is a truly gratifying contract award,” said Gerry Dinkel, President & CEO of Colt Defense, “to have the 1911 selected again for U. S. Forces 101 years after its initial introduction is just an incredible testament to the timeless design and effectiveness of the Colt 1911. Colt Defense looks forward to another great partnership with the Marine Corps as we renew industry production of the military 1911.”

The initial Delivery Order on the contract is for 4036 CQBP, plus spares. Deliveries will begin later this year.

About Colt Defense LLC
Colt Defense LLC, together with its Colt Canada Corporation subsidiary, is one of the world's leading designers, developers and manufacturers of small arms weapons systems for individual soldiers and law enforcement personnel. The Company’s portfolio of products and services addresses military and law enforcement requirements around the world. Colt Defense LLC has supplied small arms weapons systems to the United States Government and other governments for more than 160 years. Colt Canada Corporation is the Canadian government’s Center of Excellence for small arms and is the Canadian military’s sole supplier of the C7 rifle and C8 carbine. The Company maintains manufacturing facilities in West Hartford, Connecticut and Kitchener, Ontario.

More information on Colt Defense LLC is available at www.colt.com and www.coltcanada.com.