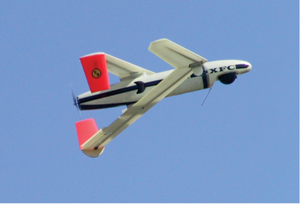 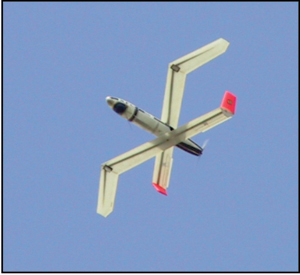 The XFC UAS was designed and developed by the Chemistry and Tactical Electronic Warfare Divisions at NRL for ISR (Intelligence, Surveillance and Reconnaissance) in order to significantly increase a submarine's situational awareness and battlespace intelligence. It's capable of operating for 6+ hours at low altitude and low cost. The drone's launch footprint, being all-electric, is minimal.

Battery-powered, all-electric UAS/UAV's like the XFC UAS are "inherently stealthy" because of their relative noiseless operation and low thermal signature. They're also very easy to operate and maintain. The downside of small, all-electric drones like the XFC UAS is that they are small, low power and low speed, which translates to a poor payload capacity and limited endurance compared their internal-combustion-powered counterparts.

Still, the XFC UAS can carry an EO/IR (Electro-Optica InfraRed) payload for a long enough period to be combat-effective. Loiter speed is 30 knots, dash speed is 52 knots.

Now, if they can just integrate a remote-detonated/impact-detonated explosive charge into it, a la the MBDA TiGER (Tactical Grenade Extended Range) SUAS/SUAV Kamikaze drone.

If you want to see it in person, you can check it out at booth 256 at the 2009 Association for Unmanned Vehicle Systems International (AUVSI) meeting in Washington, DC from August 10 – 13.

David Crane started publishing online in 2001. Since that time, governments, military organizations, Special Operators (i.e. professional trigger pullers), agencies, and civilian tactical shooters the world over have come to depend on Defense Review as the authoritative source of news and information on "the latest and greatest" in the field of military defense and tactical technology and hardware, including tactical firearms, ammunition, equipment, gear, and training.
Previous Russian Novorossiysk Diesel-Electric Silent/Stealth Submarine: New Silent Sub Creates Virtually-Undetectable ‘Maritime Black Hole’
Next Northrop Grumman RQ-180 Low-Observable Flying-Wing Stealth UAS/UAV/Drone Aircraft for ISR Missions: Out of the Black and into the Light!