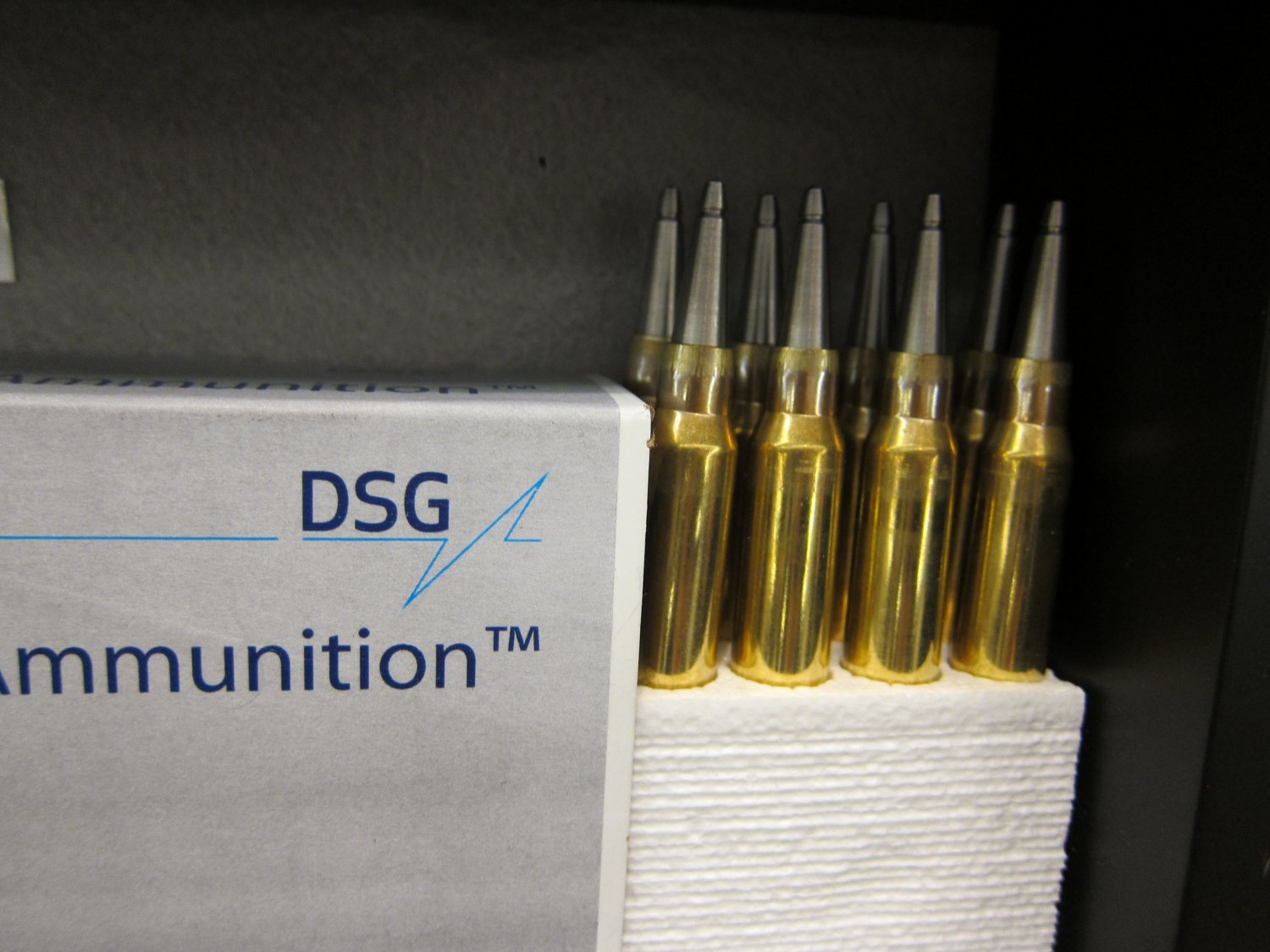 While DefenseReview (DR) was at NDIA Infantry Small Arms Systems Symposium 2011, recently, we came across a booth displaying some of the most interesting and tactically exciting small arms ammunition we’ve ever seen. In fact it’s potentially one of the most important products displayed at the show, in our opinion. The company that makes it is actually a Norwegian company called Defense & Security Group (DSG), and it would appear that they’re poised to create a paradigm shift in military small arms ammunition capability for waterborne operations of just about every type.

The kicker is that DSG MEA supercavitating ammo also has a unique low-angle capability, allowing an operator/shooter to fire the ammo from above the surface into the water at a very low angle of attack, as low as two degrees in choppy water and 7 degrees into glass-smooth water without ricochet. After entering the water, the bullet will continue its true line of flight. There’s no bullet deflection whatsoever, so the operator only need deal with the aforementioned optical refraction of the water. 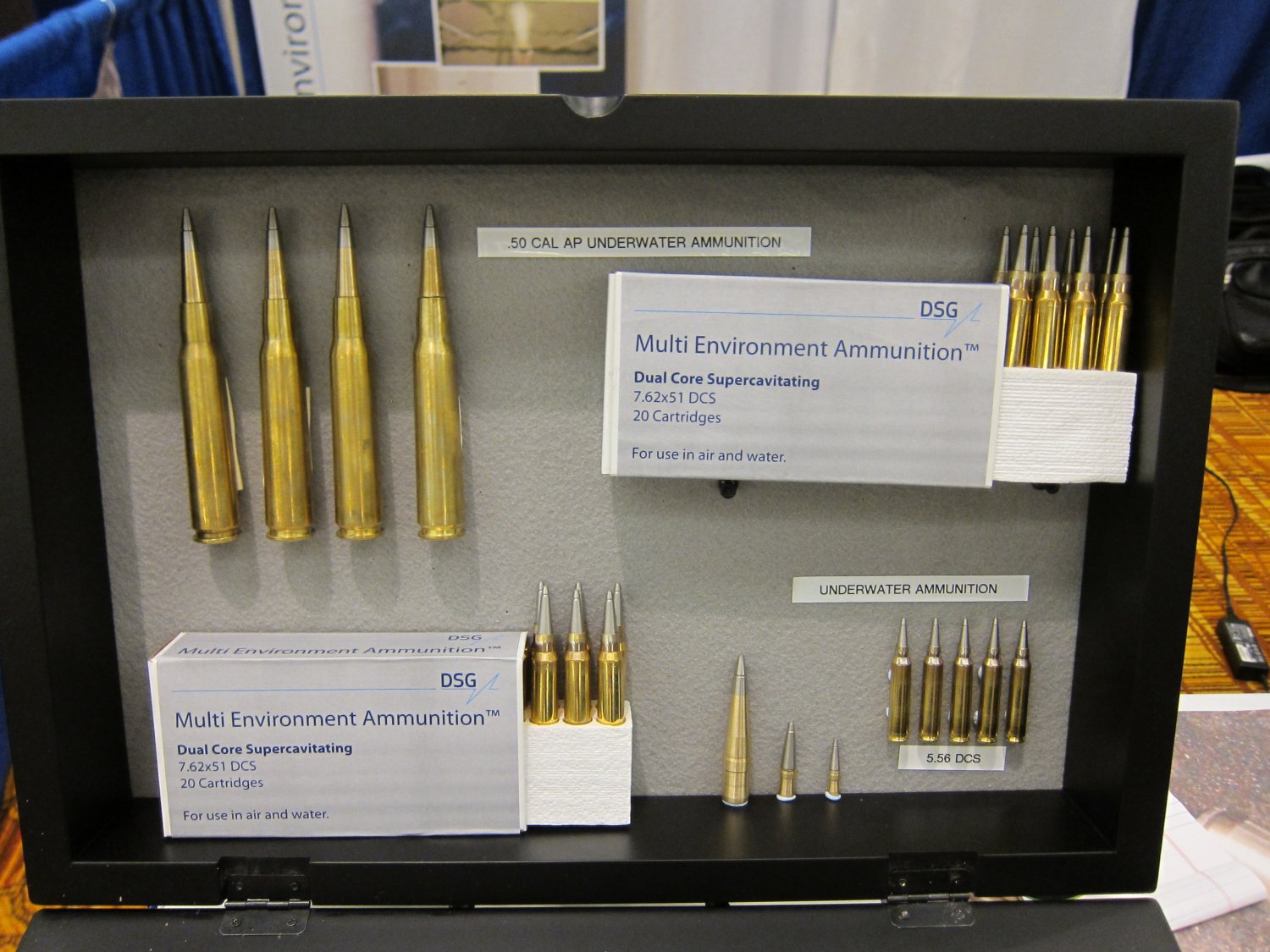 DSG Technology Director of Business Development Richard Morgan took Defense Review through all the DSG Supercavitating Rifle Ammo calibers the company had on display, including 5.56x45mm NATO (5.56mm NATO), 7.62x51mm NATO (7.62mm NATO), and .50 BMG (12.7x99mm NATO). DR didn’t see a DSG supercavitating .338 Lapua Magnum (8.6x70mm or 8.58x70mm) round on display, but it would seem logical that the company has already designed and developed one, since the .338 has become a very popular round for military Special Ops sniper and anti-materiel applications. If they haven’t, they should, and most likely will.

But let’s talk about what we know. The 5.56mm NATO DSG MEA dual-core supercavitating (SC) rifle rounds are spin stabilized just like any normal rifle round, so they travel just as far (or farther) and accurately through the air as any standard rifle round. Their uniqueness comes into play once they hit the water. First, when fired into the water from the air, there’s no deflection, i.e., no change in trajectory. The bullet will continue its straight path. The 5.56mm dual-core SC round has an accurate range of 15 meters underwater. The 7.62mm NATO dual-core SC round has an effective 25 meter range underwater. And, the .50 BMG/12.7x88mm NATO dual-core SC round can achieve 60 meters under water. There are three versions of the DSG MEA 7.62mm supercavitating round: General Purpose Supercavitating, Dual Core Supercavitating, and Armor Piercing/Armor Penetrating (AP) Supercavitating. There are two versions of the .50BMG/12.7mm round: Super Sniper Tactical (SST) and Dual Core Supercavitating. 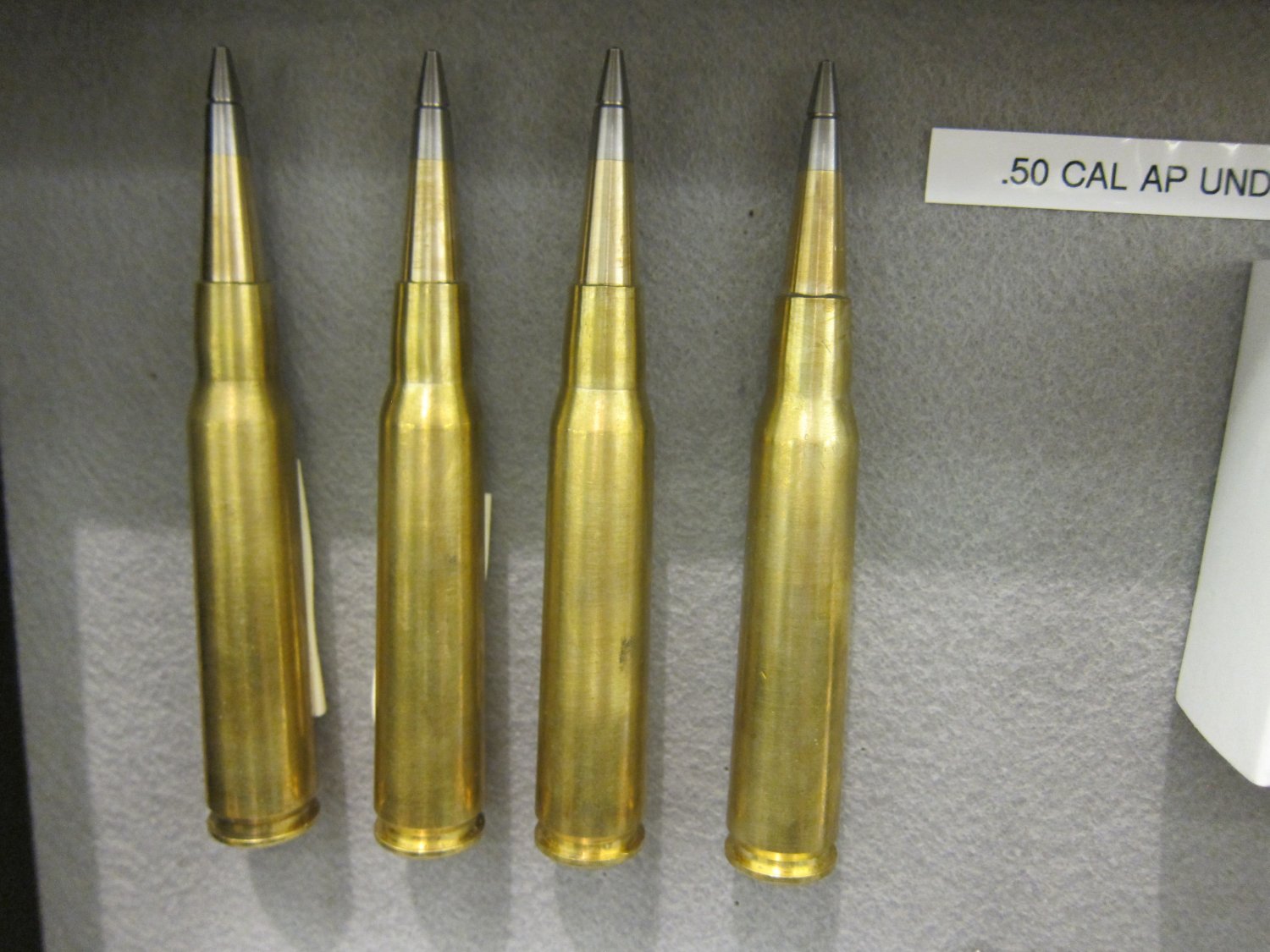 “This technology is completely scalable. It works up to very large caliblers, 127mm. We are currently working with the anti-submarine warfare environment where we are doing development work for navies looking at hard-kill torpedo countermeasures. And, we’re using the .50 [.50 BMG caliber], 20mm, and 30mm to kill torpedoes in the water,” says Morgan. Mr. Morgan went on to tell DefenseReview that the DSG MEA supercavitating rifle ammo’s unique underwater kill capabilities allow it to be used for UUV(Unmanned Underwater Vehicle) applications. Provided you have a gun that can work reliably and accurately underwater, you can use the DSG MEA SC ammo to turn UUVs into armed/weaponized UUVs for both offensive and defensive sub-aqua/underwater warfare applications and ops. Morgan told DR that with the .50 BMG supercavitating ammo, an armed UUV can “defeat steel objects” at 60 meters underwater, “or you can point the UUV out of the water, and from 5 meters below the surface, you can hit a target 1,000 meters in the air”, which is a “new application”.

Defense Review was really blown away by the DSG MEA Supervavitation Rifle Ammo tech, and we’re looking forward to running some of it when we can, and writing a full review. We’d really like to see how the DSG MEA .50 cal ammo melds with the MICOR Defense Leader 50 .50 BMG sniper/anti-materiel rifle. This ammunition would appear to provide tactical professionals with a unique and important capability in waterborne environments. 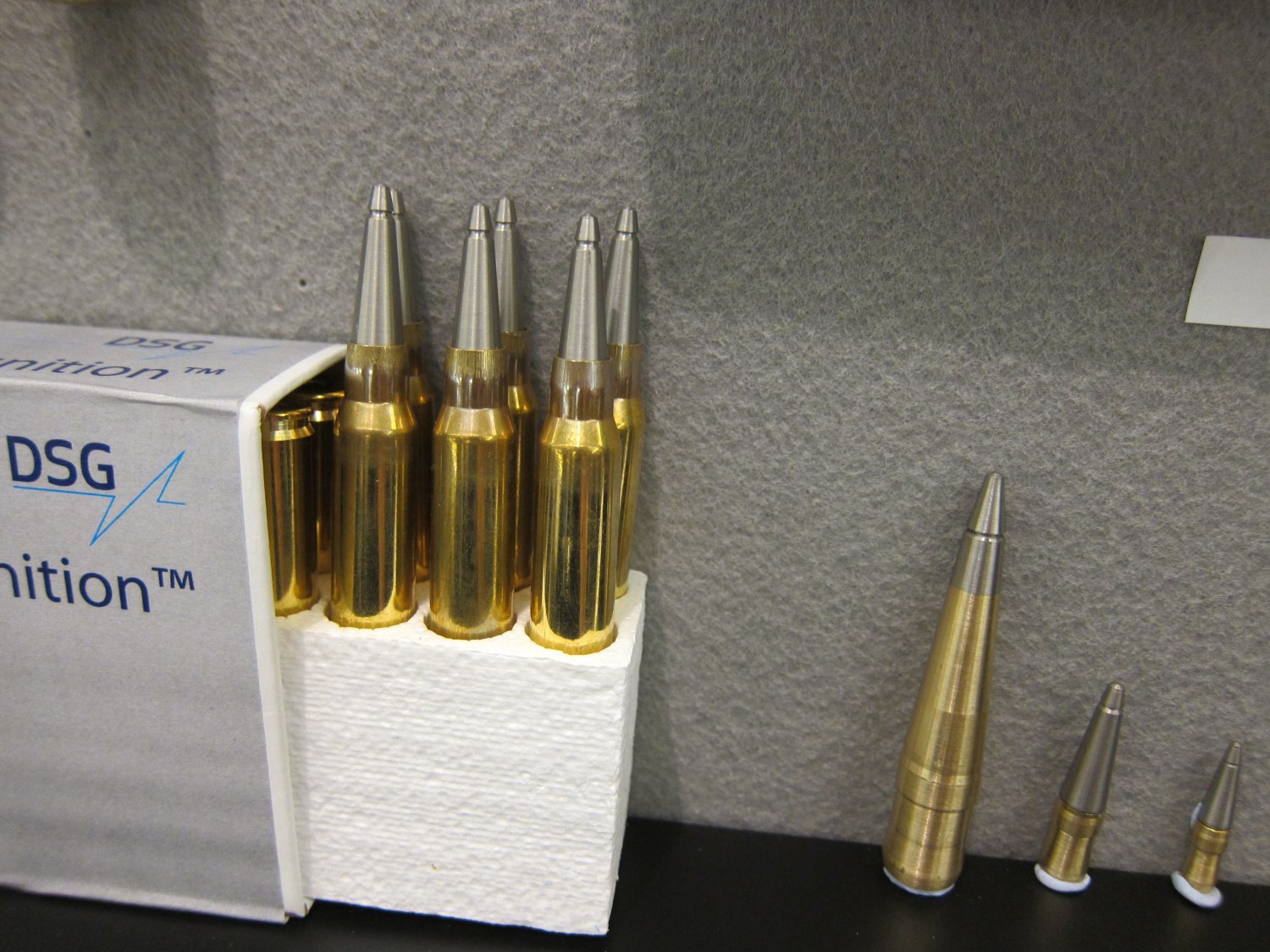 Also available in 5.56mm and 9mm with similar relative attributes 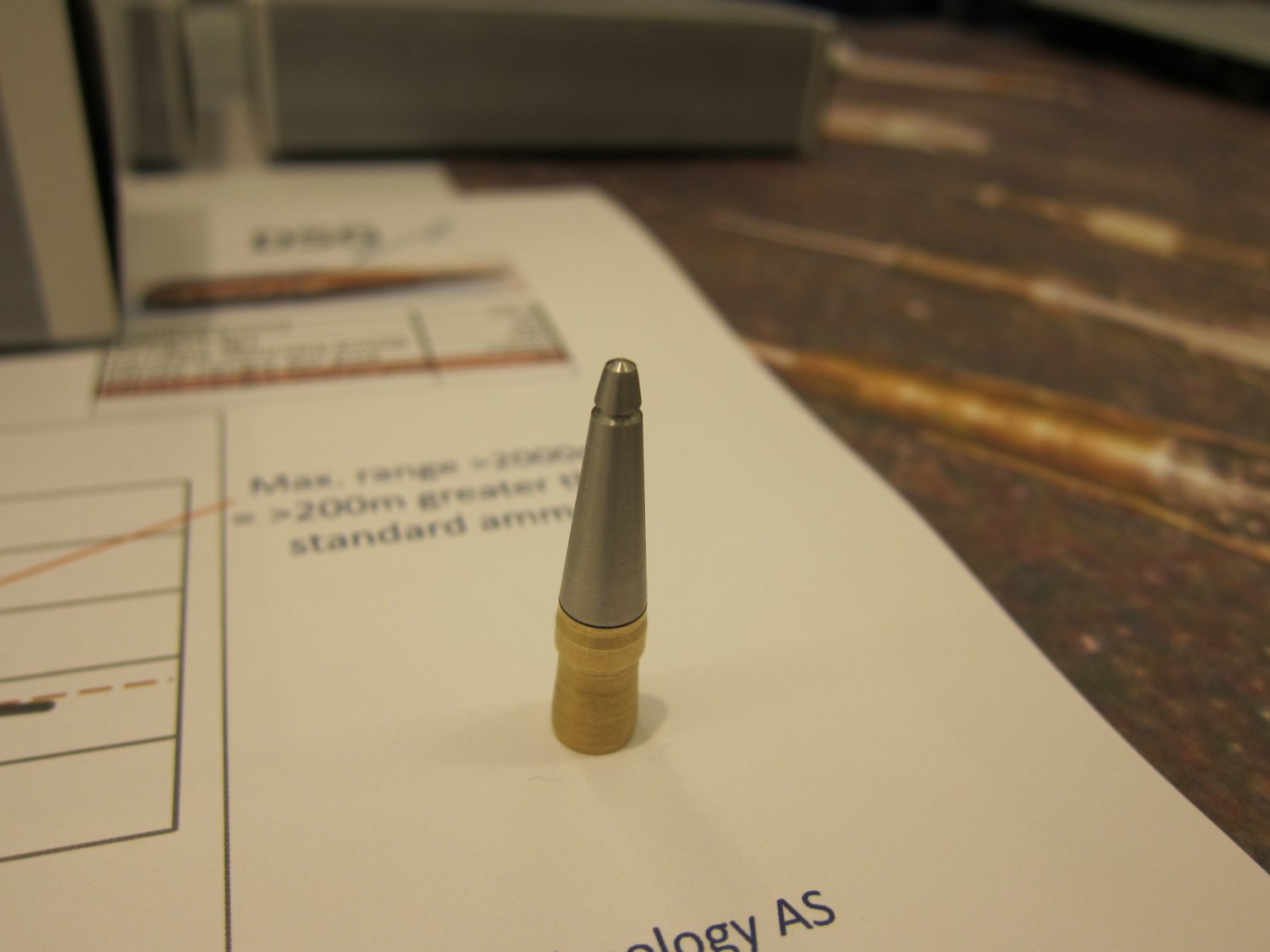 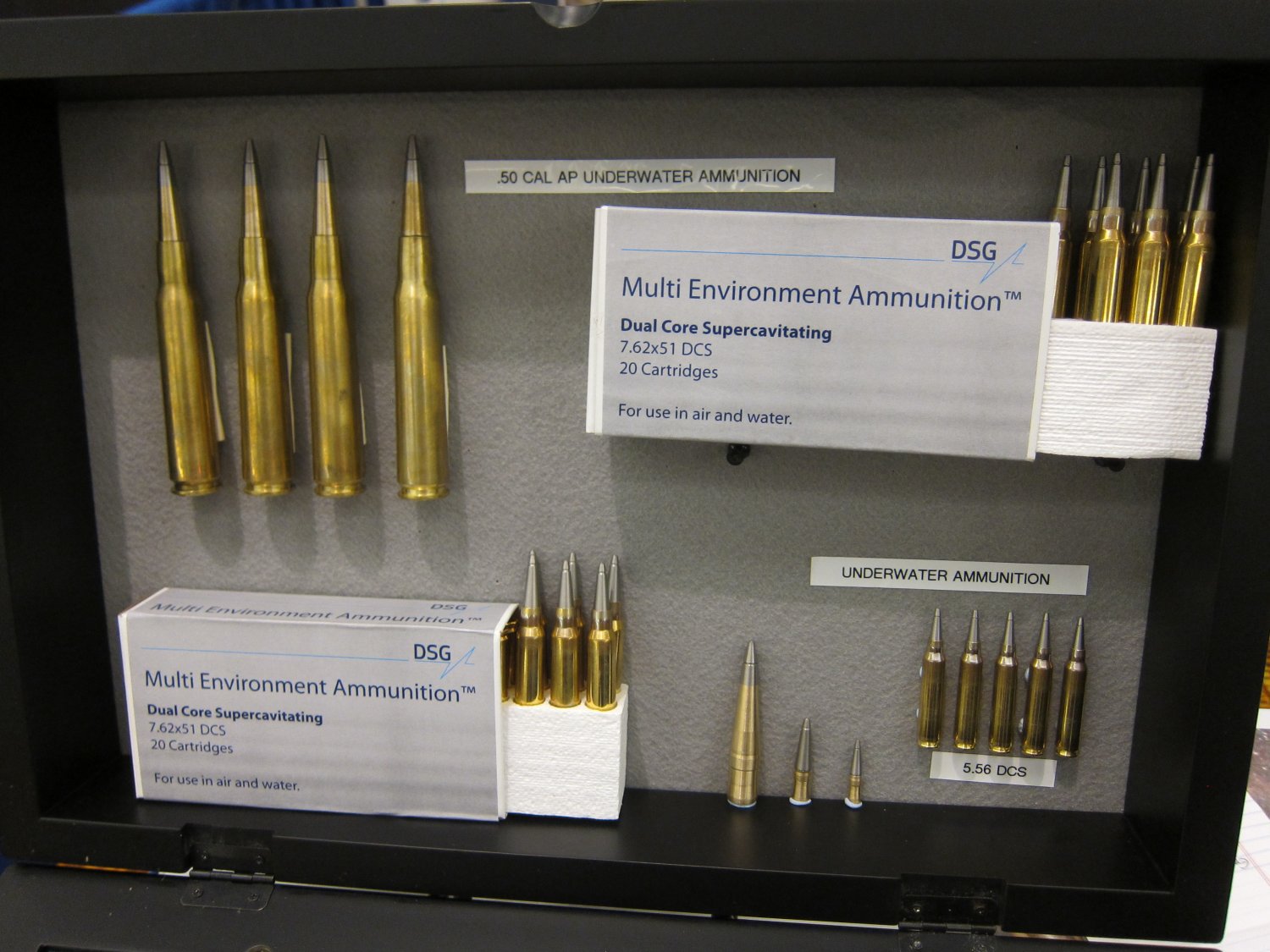 DSG Technology is a specialist developer of underwater and multi-environment ammunition
(MEA™), which is proprietary patented technology that delivers unparalled ballistic
performance from standard weapons in air and water.

Supercavitation Specialists
DSG’s Multi Environment Ammunition (MEA), which uses the company’s patented supercavitation technology represents a major R&D investment that gives DSG MEA a singular and world-leading status. This unique ammunition has exceptional capabilities underwater, from air to water and from water to air, even when used with standard, unmodified weapons.

These products represent the next generation of ammunition for maritime, littoral, underwater and air/water environments, with new products and ground-breaking applications under continuous development.

DSG’s development team includes some of the world’s leading experts and specialists in the field of supercavitating projectile development, responsible for numerous patents and patent applications on the subject. DSG also provides research and development, testing, prototyping, application-verification and consultancy services. 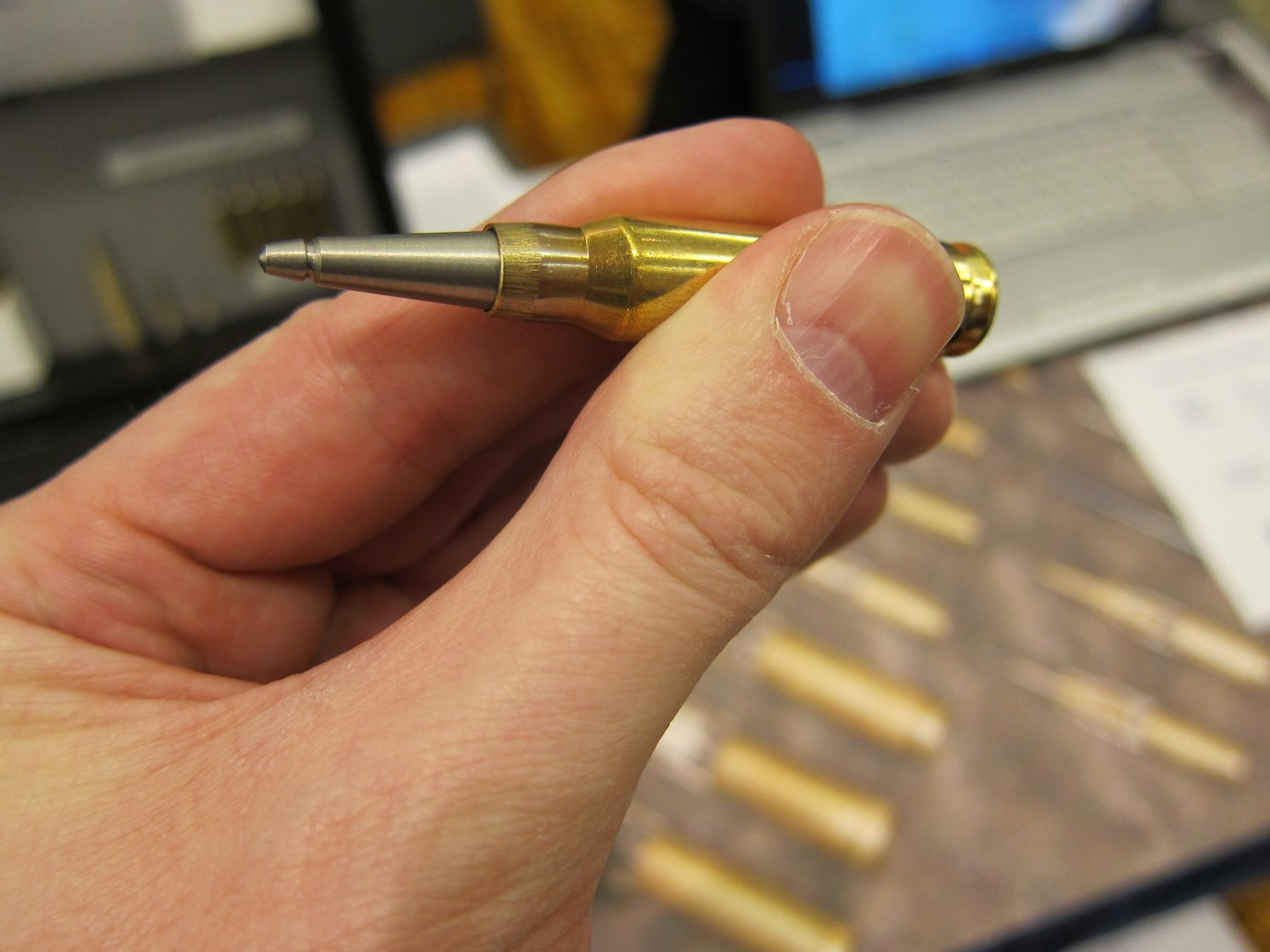 Scalable Solutions
DSG MEA technology works with all calibres from 4.5 mm through to 155 mm and is also proven in much larger supercavitating projectiles, including torpedoes, with correspondingly dramatic performance gains.

MEA ammunition design enables full-calibre projectiles to be used in standard weapons in air, from air to water, underwater and even from water into air, offering operational solutions for the most demanding situations. 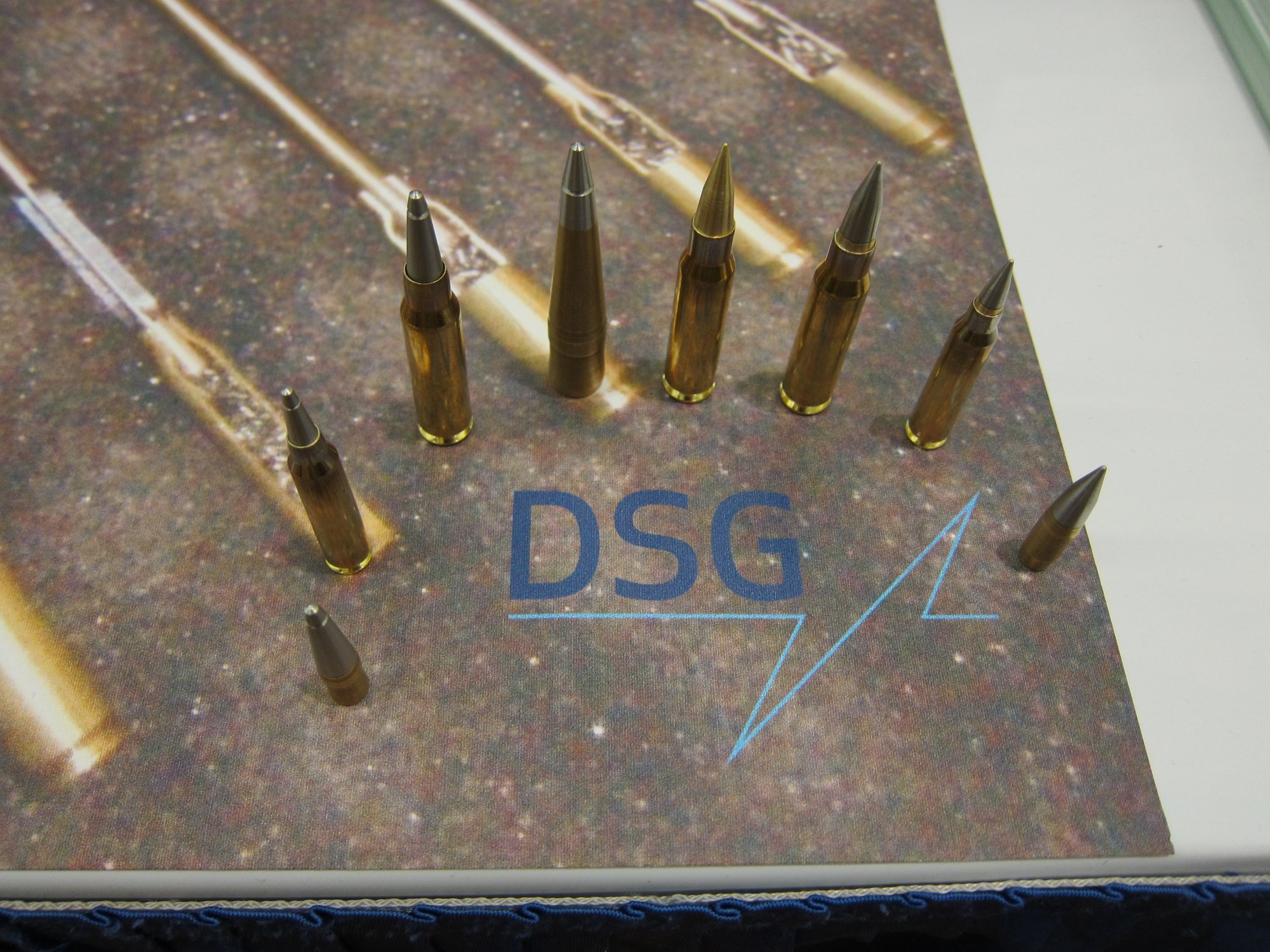