In the last year, DefenseReview has heard rumblings in military defense and tactical circles that it’s simply a matter of when, not if, the United States will experience a nuclear detonation on her soil via either a terrorist armed with some type of portable nuclear device (i.e. bomb) or a ship with a device hidden somewhere inside her parked in a port or harbor or off the coastline of a major city. In fact, one of my contacts informed me awhile back that it’s quite possible that more than one city (possibly as many as 5-7) could be hit either simultaneously or in rapid succession in a coordinated nuclear attack, and that the nuclear materials and components necessary for this type of attack could already be inside our borders.
Now, take a moment to imagine the abject horror of…

losing 10-30 square blocks (depending on the power of the respective bomb) in the downtown area of just one major U.S. city. Now imagine it happening in 5-7 U.S. cities simultaneously (or in rapid succession). It’s mind-boggling in scope and effect, and perhaps difficult to imagine. But, then again, none of us ever thought we’d see commercial aircraft flying into the World Trade Center and those towers come tumbling down in front of our very eyes on live television, either–or the Pentagon getting attacked, for that matter. If someone had told us before 9/11 what was going to happen, we probably would have thought that person was crazy. It’s still sometimes hard to get one’s mind around 9/11. But, let me tell you, 9/11 was nothing compared to what can happen to us if the bad guys (radical Muslims a.k.a. Islamo-Fascist terrorists) get their way. Make no mistake, that’s what they want to do, and that’s what many hard-working and dedicated people in our government are doing their absolute best to prevent. Let’s just hope the good folks in the U.S. military and the U.S. Department of Homeland Security can get the bad guys before the bad guys get us.

So, what does DefenseReview think about the possibility of a nuclear attack (or multiple attacks) on our soil? We don’t know. We hope the people we’ve spoken with who think we’re in for some real big trouble in the not-too-distant future are 100% wrong, and that the domestic nuclear attack they envision never comes. What’s disturbing about it, though, is that these people (who believe we’re going to suffer this type of attack) aren’t crazy survivalists or tin foil hat wearers. Some of them are highly trained professionals who are (in some cases) responsible for the security of our nation. 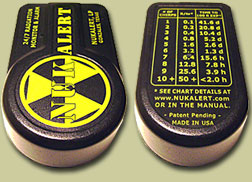 So, why am I writing about this? Well, 1) because I think it’s relevant and important to at least touch on it once, however briefly, and 2) I recently received a nifty little item in the mail from Shane Connor at KI4U, Inc. that could potentially (eventually) prove to be a real life saver, or, at the very least, give the owner some peace of mind–or scare the hell out of him/her–if the above-outlined scenario were ever to occur (God forbid). After all, Defense Review is a tech site (i.e. tactical/defense technology site). This is what we do.
It’s called the NukAlert, and it’s a key chain-size, pocket-carryable nuclear radiation detection device, or "personal radiation detector and alarm", as the company website refers to it. While highly compact (1.75"x1.25"x.75" – LxWxH) and lightweight (less than 1.0 oz.), the NukAlert has a sensitivity of 100 mR/hr to 50 R/hr indicated in 10 ranges. 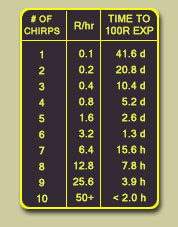 If dangerous nuclear radiation (i.e. nuclear fallout) is present in the air, the NukAlert will start "chirping" in repeating groups of rapid countable "chirps". A table on the back of the unit allows the owner to determine the the actual radiaton level. BTW, under normal conditions (no radiation), the NukAlert just makes a constant faint ticking sound. The device utilizes a patented CdS photo resistor coupled to a rare earth phosphor scintillator to detect radiation to do its magic, and it operates continuously, 24/7. Operational life expectancy for the NukAlert is 10-15 years under normal conditions (non-alarming). It will alarm continuously at the single chirp level for approx. 3 years, and at the highest chirp level (again, continuously) for 3 months.
According to the company website, the NukAlert is "used nationwide by federal, state, and local first responders, law enforcement and the Dept. of Defense (DoD), and it "is the ideal solution for increasing individual security and awareness of radiological threats." Perhaps just as important as detecting a radiation threat is the peace of mind the NukAlert can give its owner. If it ain’t chirpin’, there ain’t no radiation, and that, in a way, is just as valuable. Without the NukAlert or something like it (most likely much larger and heavier, whatever that might be), one would simply have no way of knowing whether their immediate environment is radiation-free after a nuclear accident (power plant leak, melt down, etc.) or explosion (bomb). That situation–of not knowing one’s situation–could result in a considerable amount of stress. As part of the company’s sales pitch, they say "It will be very reassuring to know, with confidence, when you and your family are out of the worst danger." Frankly, it’s hard to argue with that.
Since I got it, I’ve been using the NukAlert as a key chain and carrying it around in my pocket. While it’s a little on the thick side for a key chain, I haven’t found it to be uncomfortable when sitting with it in one of my back pockets. However, I tend to keep it in one of my front pockets. The faint ticking sound took a little getting used to at first. In fact, I had to check the manual really quickly when I first received it, since I didn’t know that’s normal and it’s supposed to do that. That ticking sound is how you know it’s operational. No ticky, no worky.
Anyway, fortunately, it hasn’t started chirping yet. I’m pleased about that. Let’s all hope it never does. I guess all I can really do is keep my fingers crossed and think happy thoughts.

Cool product. It definitely gets the DefRev thumbs-up.

The NukAlert personal radiation detector and alarm is made in the U.S.A and comes with a 10-year warranty. If you’d like to get more information on the NukAlert, you can contact KI4U, Inc. by phone at 830-672-8734. Ask for Shane Connor. You can contact Mr. Connor directly via email at [email protected]. NukAlert Pricing: $160.00 per unit, or $145.00 if 2 or mor units are purchased.
Click here to read a National Defense Magazine blurb on the NukAlert 24/7 radiation monitor and alarm titled Tiny Device Detects Radiation 24/7, as well as a NewsMax article titled Tiny Radiation Detector Could Save Millions.
NukAlert Specs (Specifications):
– Detects Gamma & X-ray radiation: 40 keV to 2 MeV
– Sensitivity: 100 mR/hr to 50 R/hr indicated in 10 ranges
– Indication: Repeating groups of rapid countable chirps
– Operational indicator: faint "ticking" = operating OK.
– Alarm loudness: ~ 61 dBA (speaking volume)
– Durability: Functional after 6′ drop or submersion to 6′

David Crane started publishing online in 2001. Since that time, governments, military organizations, Special Operators (i.e. professional trigger pullers), agencies, and civilian tactical shooters the world over have come to depend on Defense Review as the authoritative source of news and information on "the latest and greatest" in the field of military defense and tactical technology and hardware, including tactical firearms, ammunition, equipment, gear, and training.
Previous MA-1 Tactical Folder: Tactical Edged Weapon for Serious Social Purposes
Next Pinnacle Armor Speaks Out Re Dragon Skin Testing by U.S. Army PM SEQ