It’s no secret that we really like our Aimpoint CompM2 Red Dot sights/optical gunsights here at DefenseReview. The Aimpoint CompM2 Red Dot optic is currently the best red dot tube sight in the world for CQB (Close Quarters Battle) applications. It’s fast on target, and makes rapid multiple target engagement a snap at CQB ranges. However, what if you want to engage the enemy or hostile subject at extended range, outside the typicle distance envelope for close quarters battle (CQB)?
Normally, DefenseReview would recommend one of the Trijicon ACOG models. However, now there’s another option. Aimpoint calls it the "3-Power Magnifier" sight (or, "3X Magnifier" sight). DefRev was really excited to get to…

handle this brand new product at SWAT Round-Up 2004. When Michael Beltran, Aimpoint, Inc.’s director of military and law enforcement sales, handed it to me, I remember getting this really sneaky grin on my face. I couldn’t help it. I know I just got handed a really cool little item. The phrase "shit hot" immediately came to mind. For anyone not already aware, "shit hot" is operator speak for "really cool", so please excuse the language.

David Crane started publishing online in 2001. Since that time, governments, military organizations, Special Operators (i.e. professional trigger pullers), agencies, and civilian tactical shooters the world over have come to depend on Defense Review as the authoritative source of news and information on "the latest and greatest" in the field of military defense and tactical technology and hardware, including tactical firearms, ammunition, equipment, gear, and training.
Previous Krebs Custom KTR-03S Rifle/Carbine: A Kalashnikov for the 21st Century.
Next Video: Cavalry Arms M4/M4A1 Telescoping Buttstock Adapter for Combat Shotguns 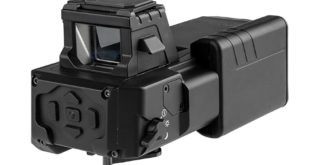