We got to handle and examine both of these items, as well as MGI’s Modular Lower Receiver with Interchangeable Mag Wells, which mates to it, at the MGI Industries, Inc. a.k.a. MGI Military booth in the outside tent situated outside of the main exhibition hall at SHOT Show 2006. In his article on the MGI QCB Upper Receiver and modular lower receiver in the #44 edition of Special Weapons for Military & Police, Charlie Cutshaw referred to the complete weapon system as the "Hydra" (as in "MGI Hydra Carbine"), the "Hydra" moniker of course referring to the seven-headed monster of Greek mythology. This is applicable to the QCB upper since it is a multi-caliber system.

In fact, the MGI Hydra’s modular/multi-caliber capability is the… 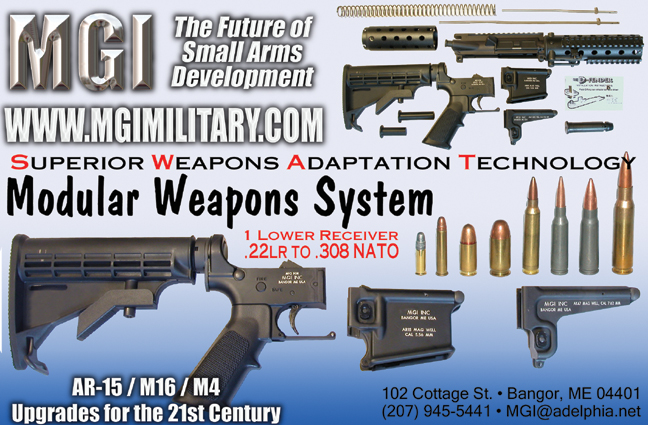 whole reason behind the design and development of the system in the first place. Mack Gwinn Sr. and Mack Gwinn Jr. (Mack W. Gwinn) developed the Hydra modular/multi-caliber weapons system in response to the Special Operations community’s need for a multi-caliber rifle/carbine that would give them an AR-15/M14/M4 Carbine-platform system that would allow them to utilize any/all calibers that are applicable to the various combat missions and environments that they find themselves in OCONUS (Outside the Contintental United States), specifically in Afganistan (a.k.a. "Stan) and Iraq. While on these missions, SPECOPS personnel (a.k.a. Spec-Operators) often come across enemy 7.62x39mm ammo and magazines (AK-47/AKM mags), so this caliber was particularly important for the MGI Hydra Carbine/modular weapons system to be able to utilize.

In order to be able convert the HYDRA from 5.56x45mm/.223 Remington to 7.62x39mm, in addition to the weapon itself (MGI upper and lower receiver assemblies) the operator only needs carry a 7.62x39mm barrel and bolt carrier group (bolt and bolt carrier), an AK magazine well, and spare AK mags (Kalashnikov mags). The actual conversion proceure can be accomplished very quickly in the field. Swapping out barrels via the proprietary and patented cam lever system takes seconds, not minutes, so it’s a true quick-change barrel. Swapping out the bolt carrier group and mag wells can also be accomplished quickly. According to Cutshaw, once the replacement magwell is installed, it locks up rock solid and ain’t comin’ loose (he describes the lock-up method in some detail), which is important for a combat weapon. 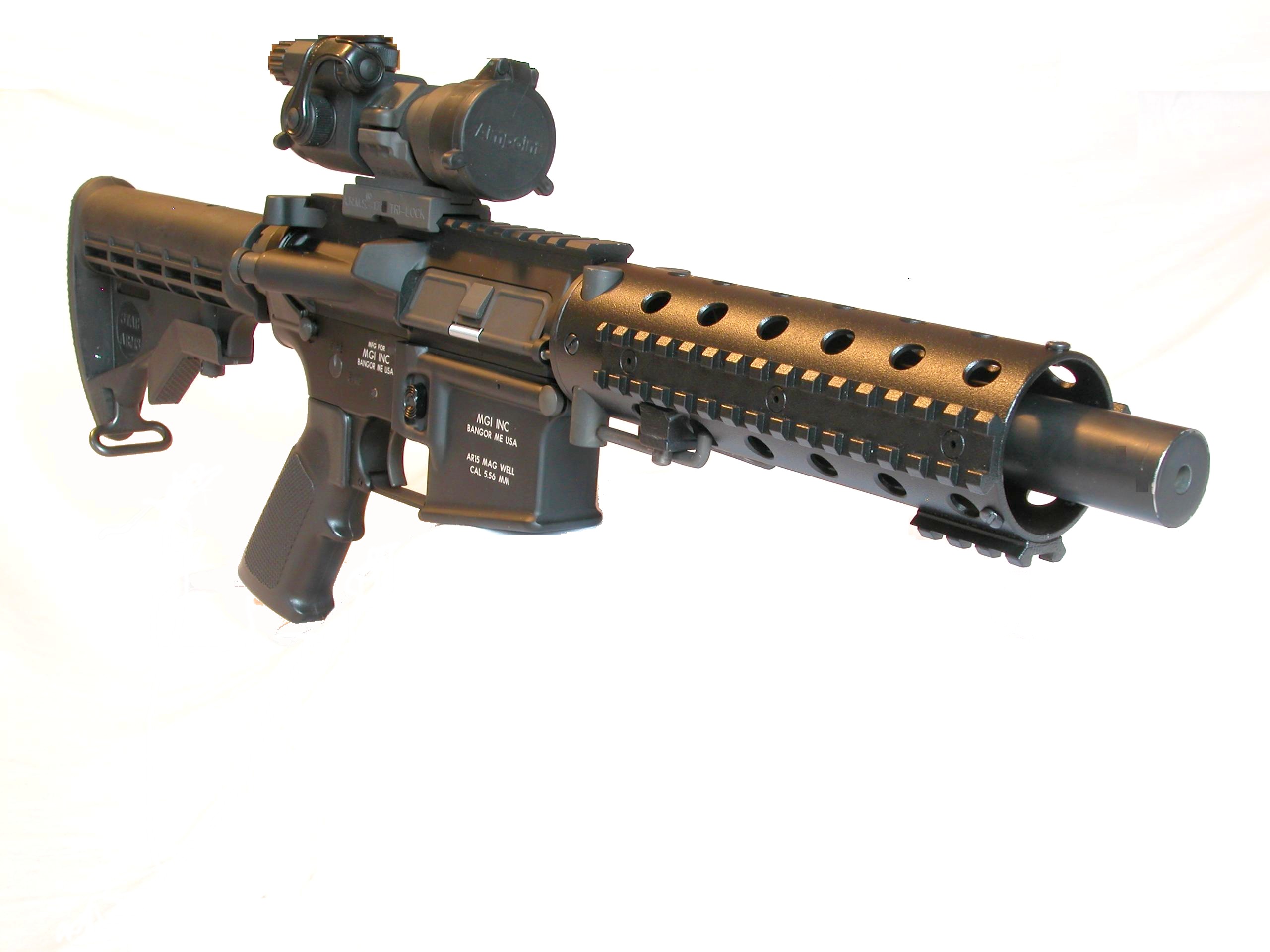 The story gets better: 7.62x39mm isn’t the only caliber conversion available. The MGI Hydra Carbine will allow the user to convert to 6.8x43mm (6.8 SPC), 6.5 Grendel, .50 Beowulf (designed and developed by Bill Alexander of Alexander Arms), .22LR (using a Jonathan Arthur Ciener .22LR Atchisson conversion kit), and .22 WMR. That gives the user a total of seven (7) calibers at he/she can utilize witht he Hydra, provided they can afford the spare barrels, bolts, bolt carriers, mag wells, and mags.

If the MGI Hydra QCB carbine/modular weapon system (MGI QCB upper and modular lower, combined) proves to be adequately durable, reliable, and accurate, and all the unique features work as advertised, it may well be the most significant development in the history of the AR-15/M16/M4 system, since the original AR-16/M16 was first developed, just as Mr. Cutshaw asserts. It’s a very slick system, and DefenseReview was very impressed with it when we got to examine it at SHOT. We look forward to putting the system through its paces as soon as possible. In the meantime, we’re going to try to get some testimonials from active U.S. military Special Operations personnel and/or PMC/PSC PSD/Security Operators who have run it.

 The MGI QCB Hydra carbine/modular weapons system operates via direct-gas-impingement, just like the standard AR-16/M16/M4 Carbine. However, a gas piston-driven (gas piston/op rod) version of the Hydra may be in the works (i.e. under development). We don’t know, yet. We’ll try to find out.

The system’s performance should be even more impressive, once you add the MGI M16/M4/AR-15 Rate Reducing Buffer, MGI Regulated Gas Tube, MGI Super 2X Recoil Spring, and MGI D-Fender "D-Ring". The Rate Reducing Buffer can apparently reduce the AR-15/M16/M4’s cyclic rate/ROF (Rate of Fire) over 300 RPM (Rounds-Per-Minute). The Regulated Gas Tube, according to MGI, can assist in mitigating gas port erosion and enables the user to adjust the gas system for specific ammo and environmental conditions. The Super 2X Recoil Spring, made from music wire, is more than two times as strong as a conventional spring and gets rid of the "bong" sound of the conventional spring. The D-Fender D-Ring, which DefenseReview picked up at the show, "can assist in eliminating extraction problems".

David Crane started publishing online in 2001. Since that time, governments, military organizations, Special Operators (i.e. professional trigger pullers), agencies, and civilian tactical shooters the world over have come to depend on Defense Review as the authoritative source of news and information on "the latest and greatest" in the field of military defense and tactical technology and hardware, including tactical firearms, ammunition, equipment, gear, and training.
Previous Tactical Iraqi for U.S. Military and Private Security Company (PSC) Operators
Next USSOCOM’s Combat Pistol (CP) Program Cancelled?