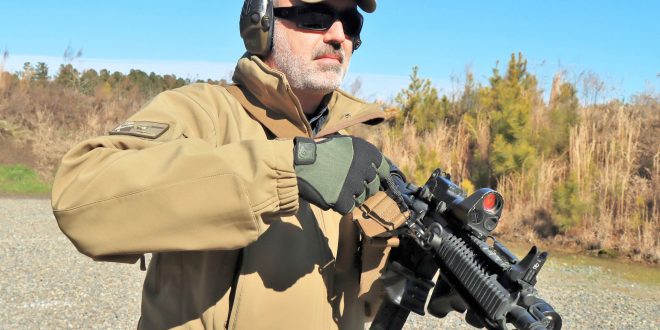 Let’s be real, when it comes to rifle slings, most shooters have settled upon using 2-point slings (with a single adjustable strap, connected to the rifle at the buttstock and handguard). Multi-point slings and single points have for the most part faded out of large-scale use. Multi-point slings have faded because they’re somewhat complicated via multiple straps, and they limit rifle movement (switching shoulders, etc.). Single point slings have likewise faded because they don’t offer a way to secure the rifle tightly to the body to allow the shooter to go hands-free.
Single points, I think, offer the most maneuverability, especially in CQB (Close Quarters Battle), as I pointed out here at DR some years back in “Tactical Rifle Slings for Close Quarters Battle/Close Quarters Combat (CQB/CQC) and Tactical 3-Gun Competition Applications” (2011). I utilized a multi-point sling for three tours in Iraq in the early 2000’s before switching to a single-point sling. Then, finally, in 2010, I transitioned to a VTAC padded two-point. Since then, nothing’s really come out to make me want to look at alternatives–that is until I received two McLean Corp U.S.A, Dynamic Retention Slings (DRS).

McLean Corp’s Dynamic Retention Sling, or DRS, is basically a multi-point sling that has the ability, via pulling on one strap, to instantly transform into a single-point sling, basically, giving you both the security of a multi-point and the maneuverability of a single point all in one system. So, why is this useful? Multi-point slings do provide the most secure method of attaching a weapon to a shooter’s body, using the second strap that runs along the side of the weapon, thus creating a loop that one puts their head and shoulder through.
This loop can be adjusted to really sinch the rifle down, allowing hands-free operation, with the rifle staying where it’s at. Compared to a two-point sling, it’s less maneuverable when shouldering, but that’s solved by use of a pull cord at the front end of the DRS sling, which can be detached from the front of the rifle, now converting it into a single-point. This offers maximum maneuverability for switching shoulders, allowing you to maneuver the rifle around tight spaces with the rifle, and so on. This is exactly what makes McLean Corp’s sling different from others: convertibility.

See it in sequence: 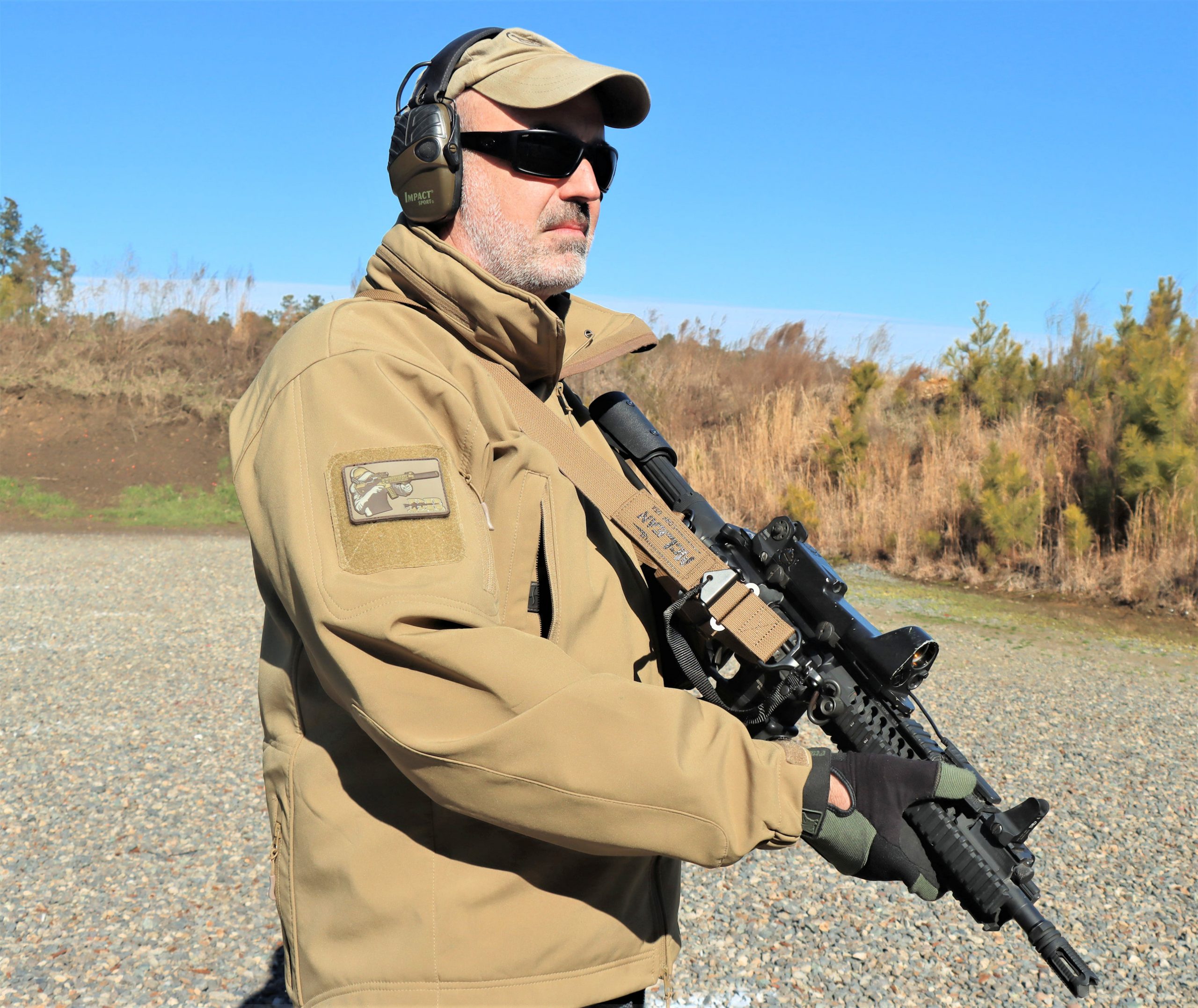 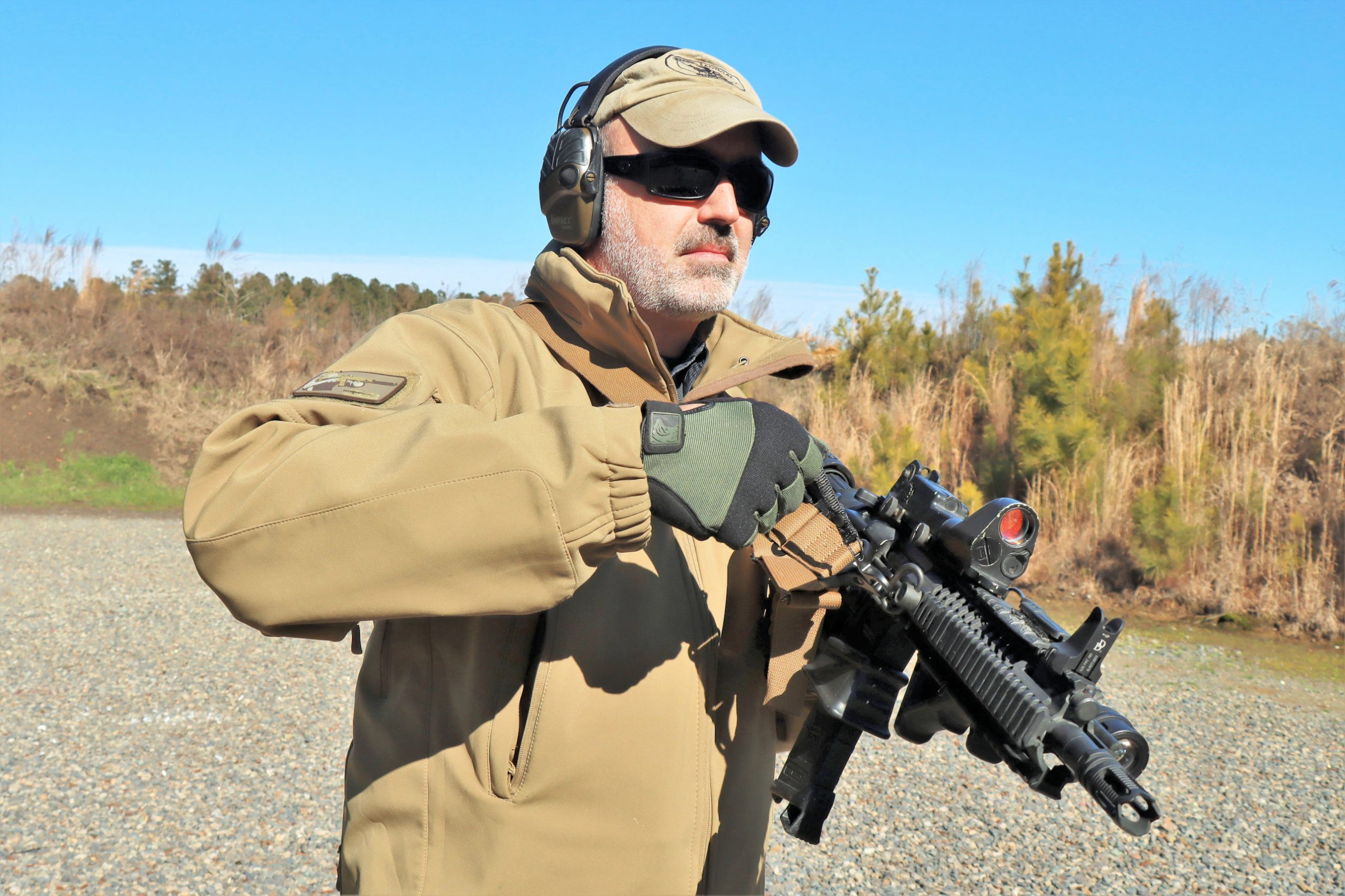 Pulling on the cord (leash) attached to the front sling attachment point, releasing the sling, turning it into a single point. 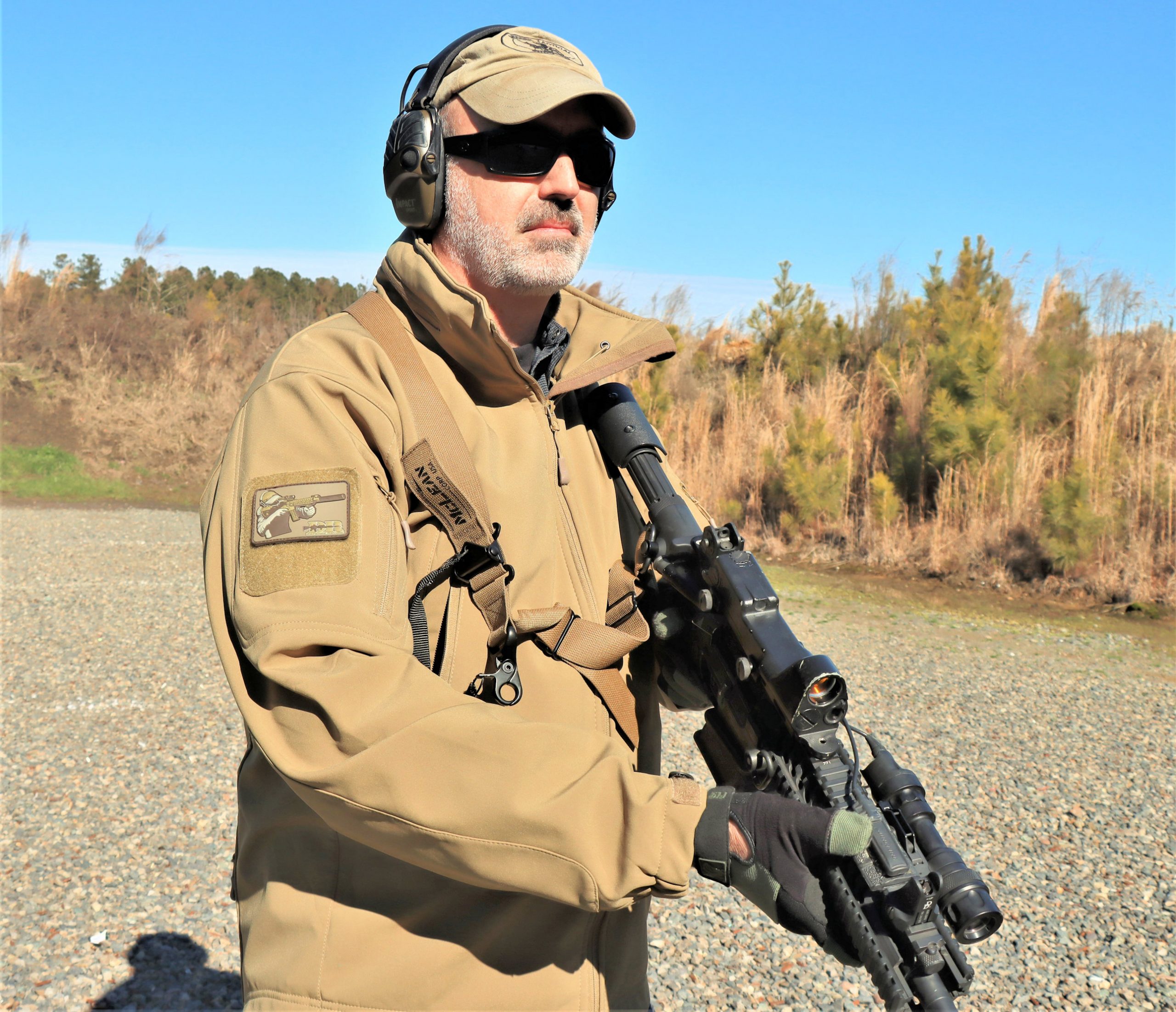 Carbine retained to the shooter via the back sling connector, just like a regular single-point. 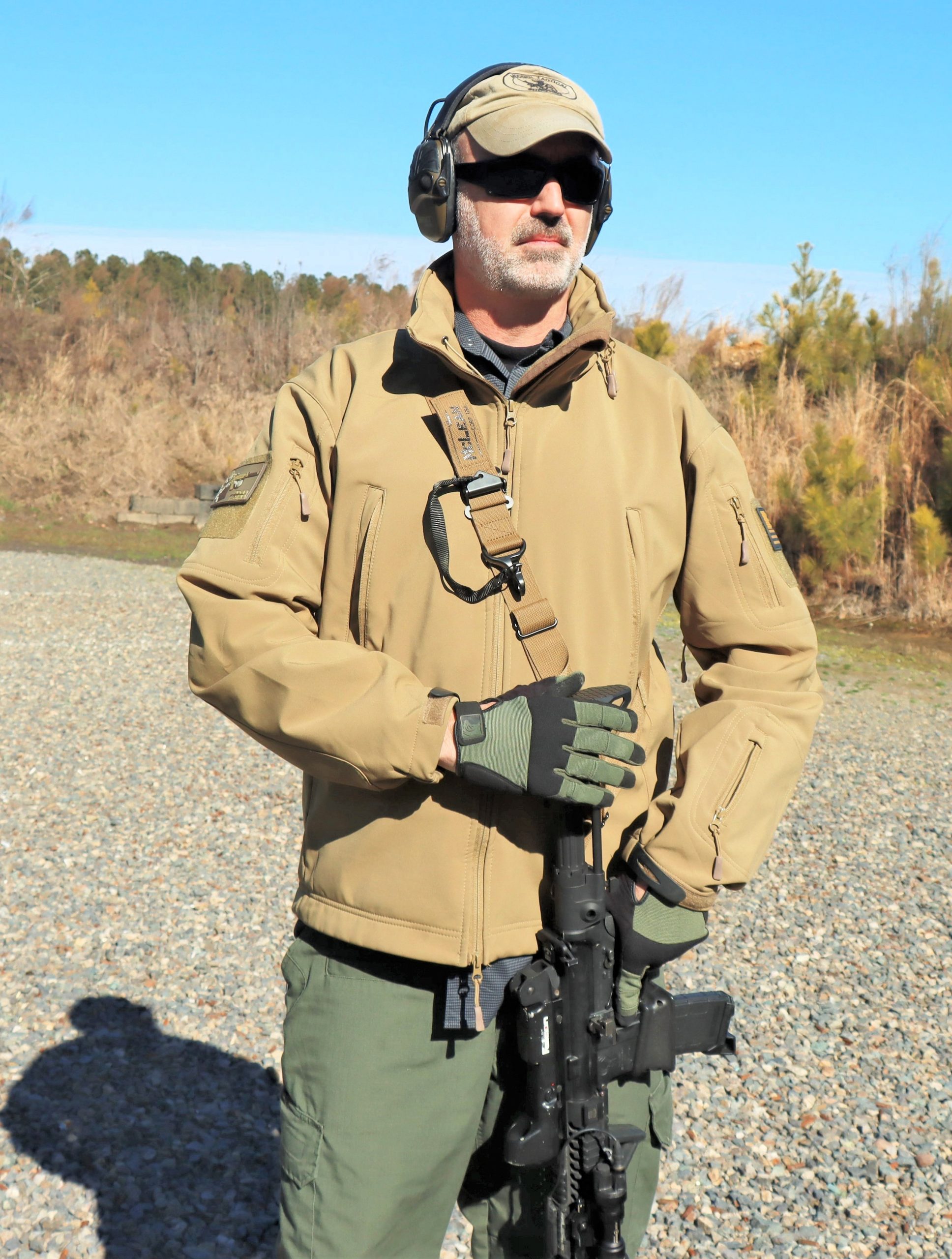 Here you can see the front attachment claw, to turn it back into a multi-point. One just needs to hook this back on the front sling swivel.

To be able to use the sling properly, the rifle/carbine must have some sort of receiver end plate designed for a single-point sling attachment (quick release style or for a sling loop), like a Magpul Ambidextrous Sling Attachment Point. Once properly rigged up, (which does take some time adjusting all the straps to the proper length, the DRS does work, first starting out as a multi-point, then, a with pull on the front strap or grab tab, it releases from the front of the rifle, instantly turning it into a single point sling. 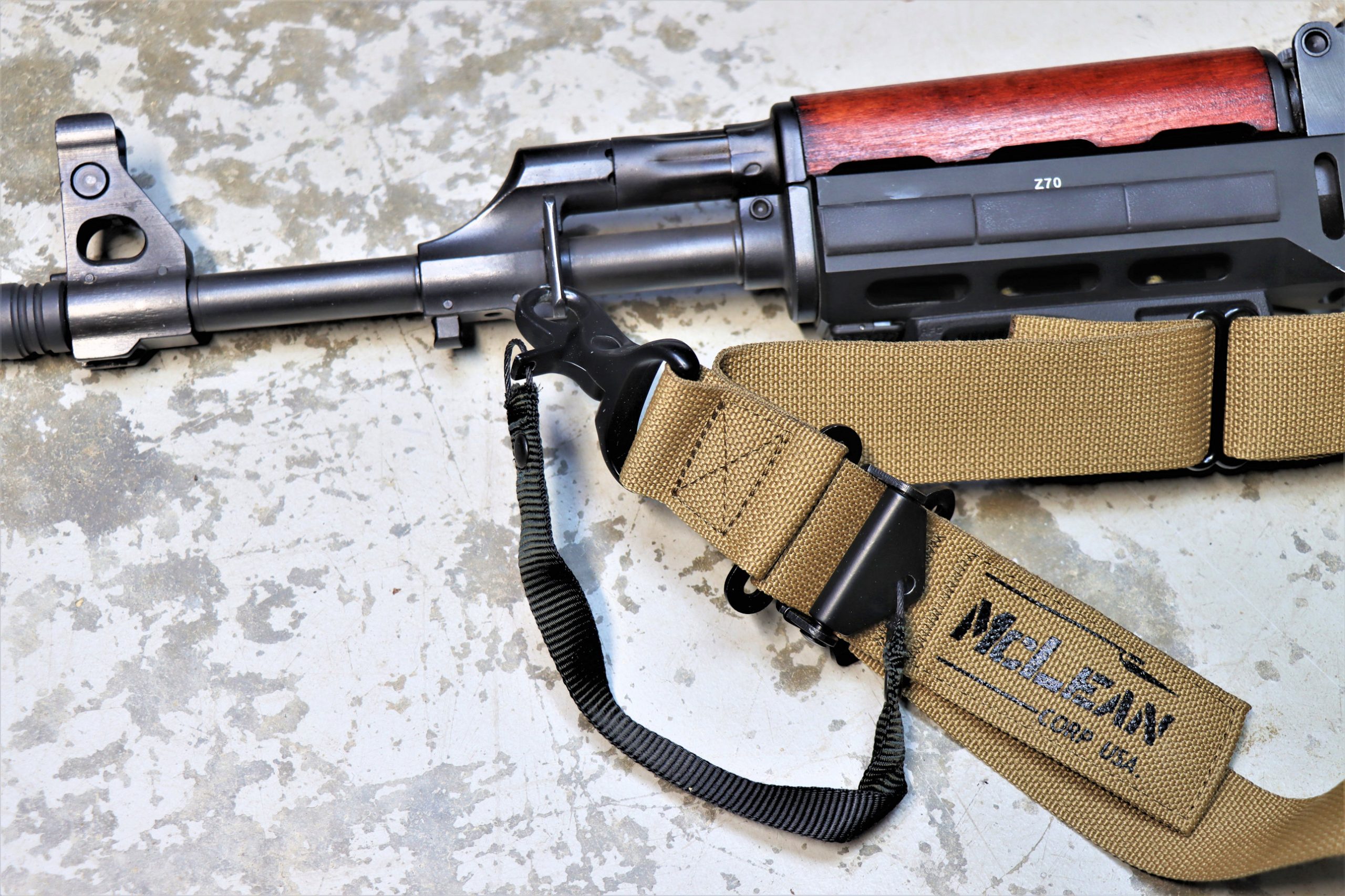 Close up of front locking claw and pull cord/tab that will release it turing it into a single point.

I’ll be the first to admit that I think the majority of AR owners, both civilian and (especially) military, have gone away from having any sort of receiver end plate sling attachment point on their carbine, due to the domination of two-points slings. Seeing as how, in order for the DRS to work properly, it must have this, I don’t know if many will be interested in giving this sling system a try. I just so happen to have two carbines that still have receiver end plate sling mounts. To be perfectly honest, I too still prefer two-point slings. But, and there is a but here, I do think the McLean Corps DRS is perfect for other types of rifles, especially one that is almost as popular as the AR-15/M4/M4A1. 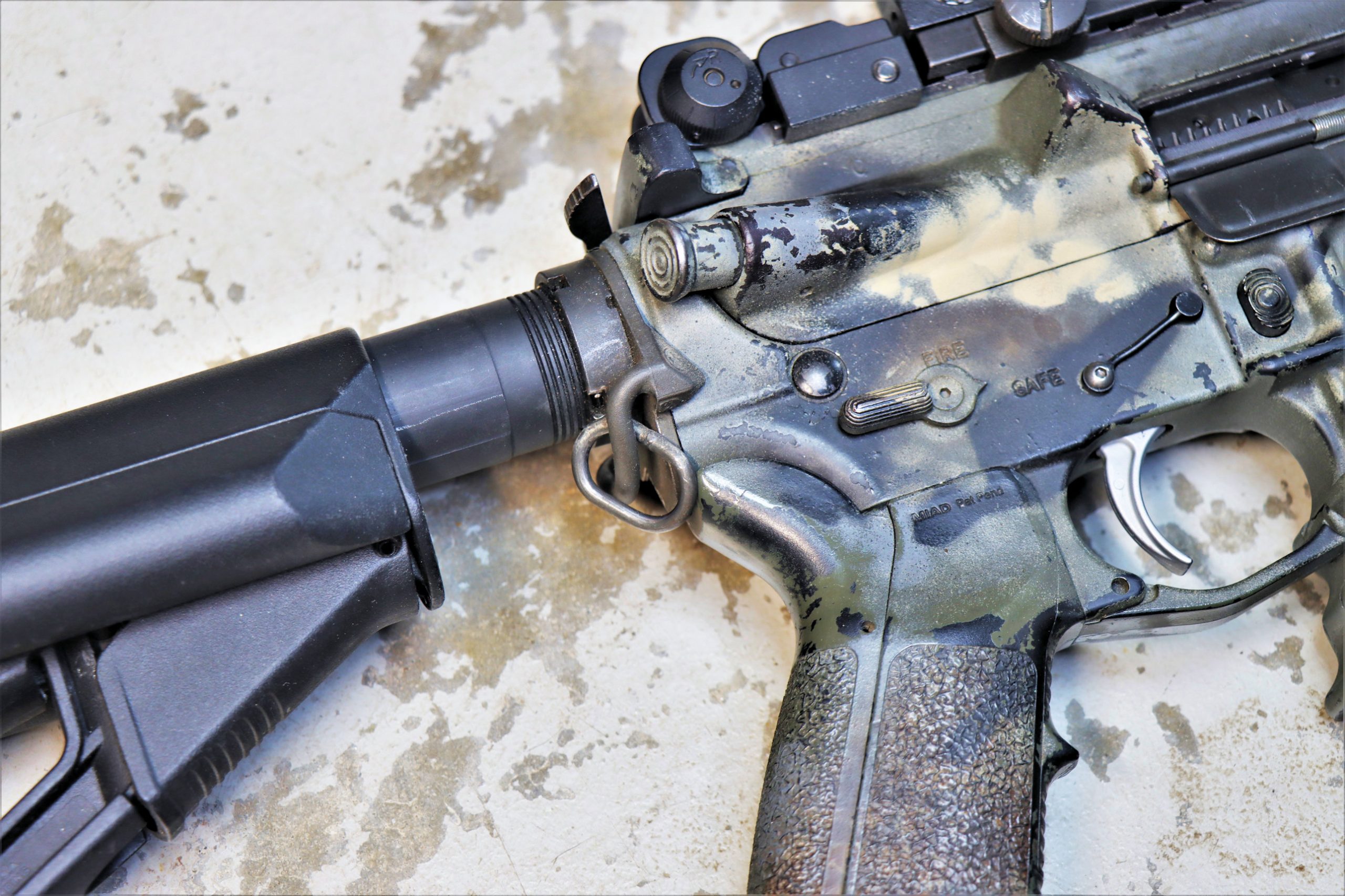 The one downside to McLean Corp’s sling, it requires a rear receiver sling mounting point, like this one from Magpul, their Ambidextrous Sling Attachment Point.

Side Folders, Here Is the Perfect Sling!

Most AK (Kalashnikov AKM-type)-pattern rifles, including Galils (which I’m really into), have sling attachments on the receiver at the back of the rifle. This is due to many having side-folding or under-folding stocks. A sling mount at the end of the buttstock is just not practical here. Because of this, I’ve found the McLean Corp DRS sling to be perfect for both my Zastava Arms AK-47 M70 ZPAP (Yugoslavian AK) and ATI Galeo (copy of a Galil ARM). Both have front and rear receiver sling mounting points. The ZPAP has a Magpul Zhukov-S Stock folding stock with a built in QD mount. The Galeo has a built-in metal loop for a sling. 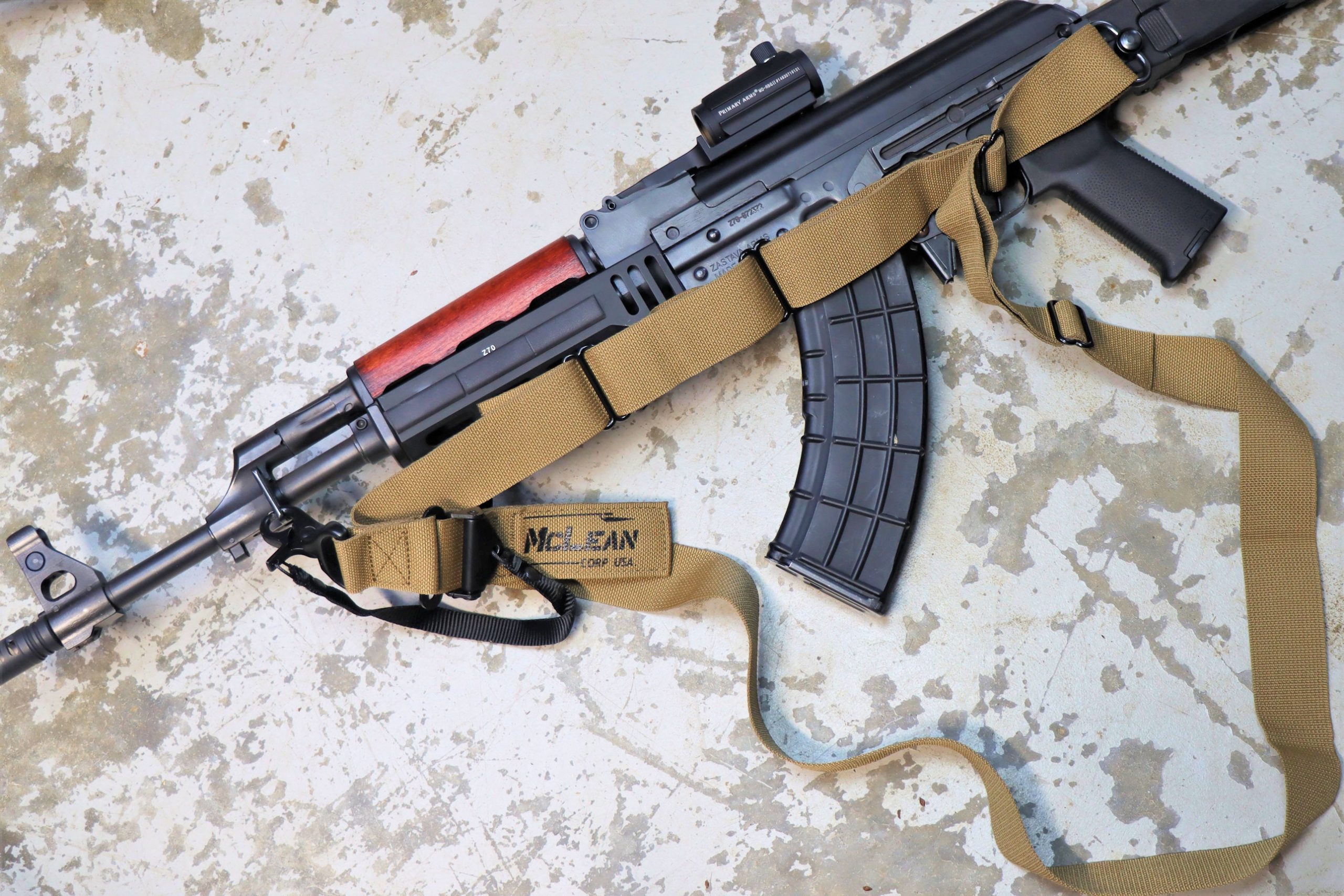 The McLean Corp DRS is an excellent option for rifles such as this Zastava ZPAP M70 and other AK variants. 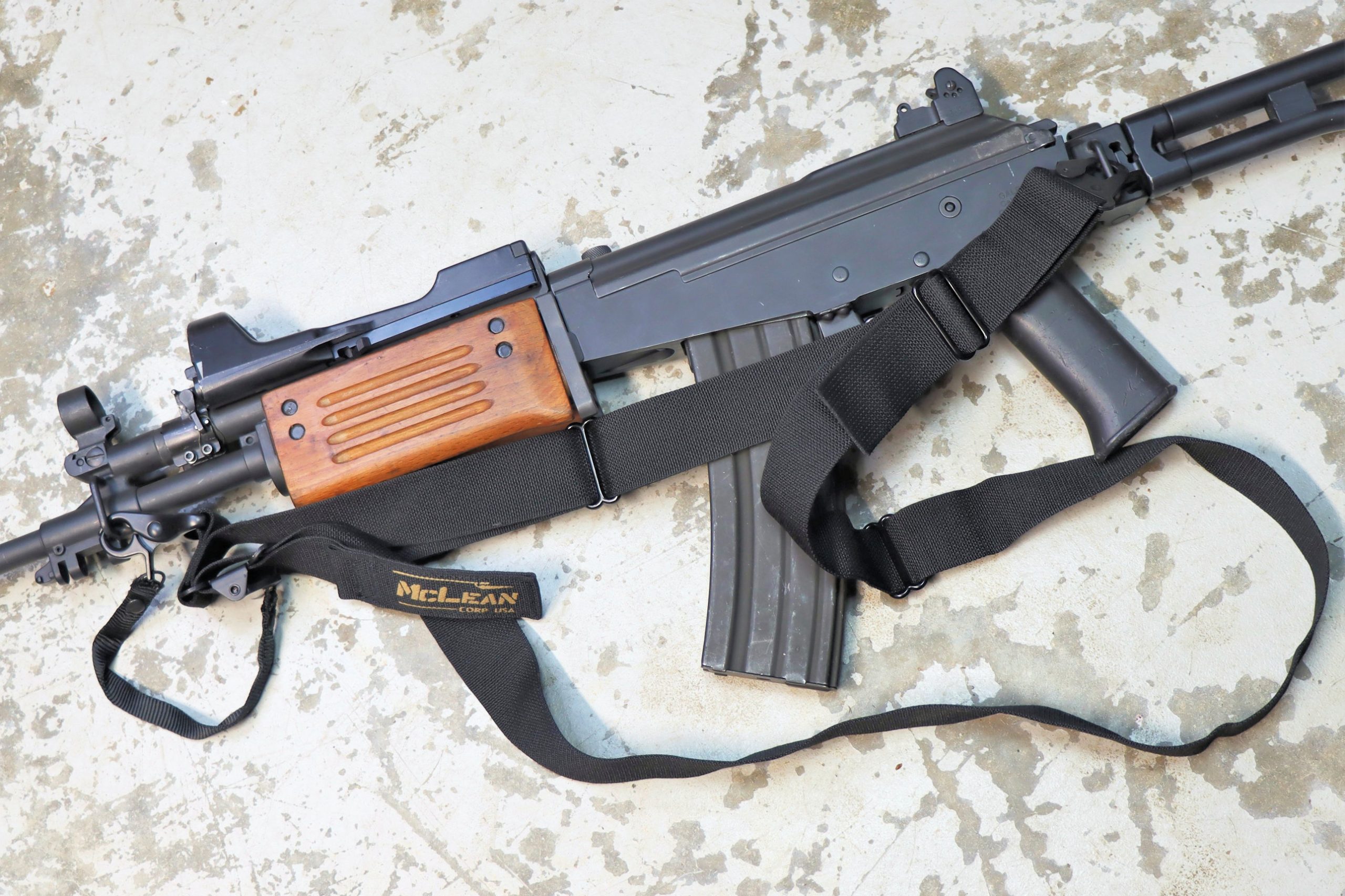 Aside from coming in multiple colors, another big plus is that the Dynamic Retention Sling can be purchased with either a quick-detach (QD) point or metal clip with opening gate for attaching to built-in sling mounts. So, what do I think? For these types of guns, it’s awesome. Now, I can carry both rifles in multi-point mode, attached to my body, with stocks folded. 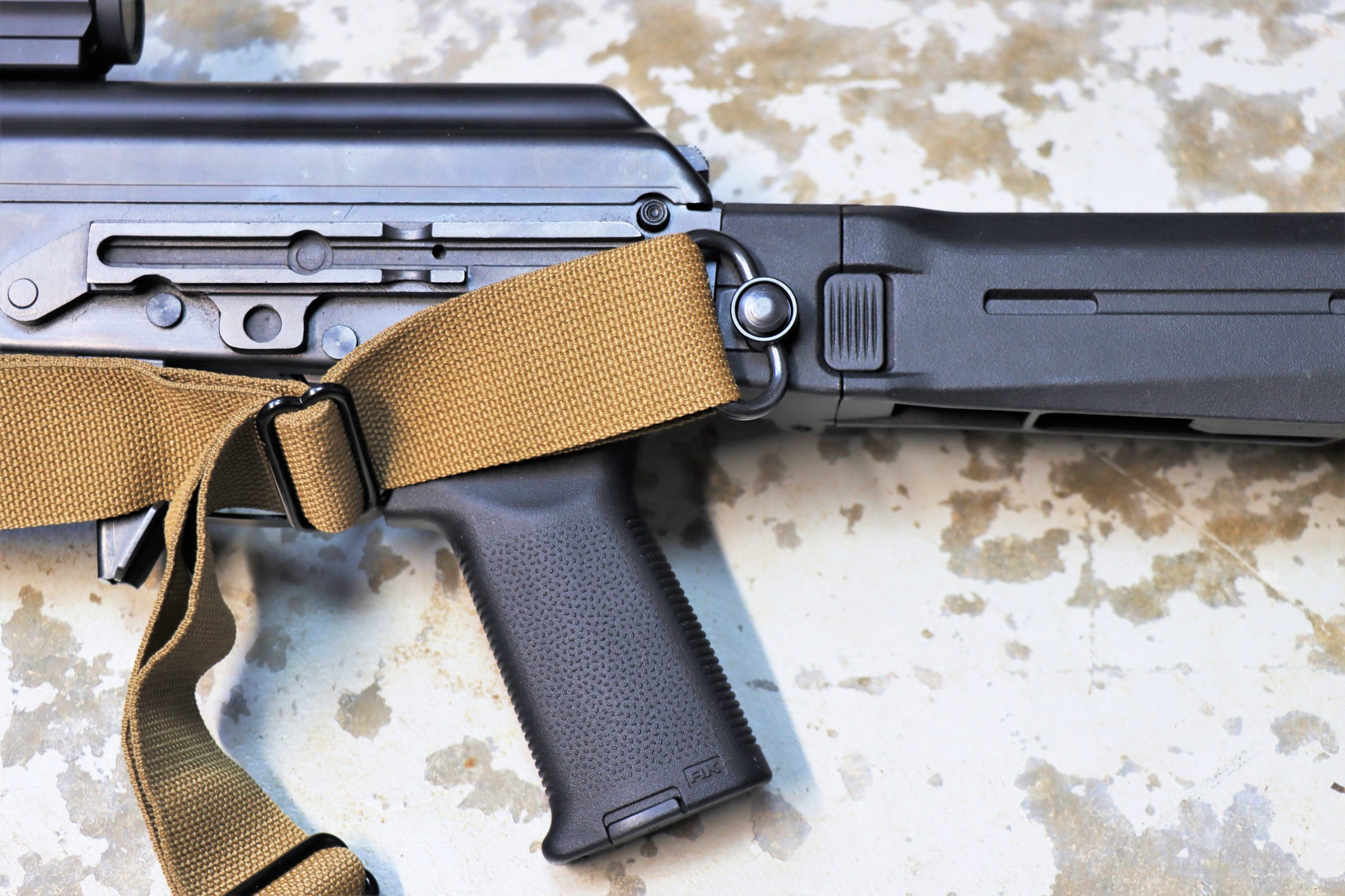 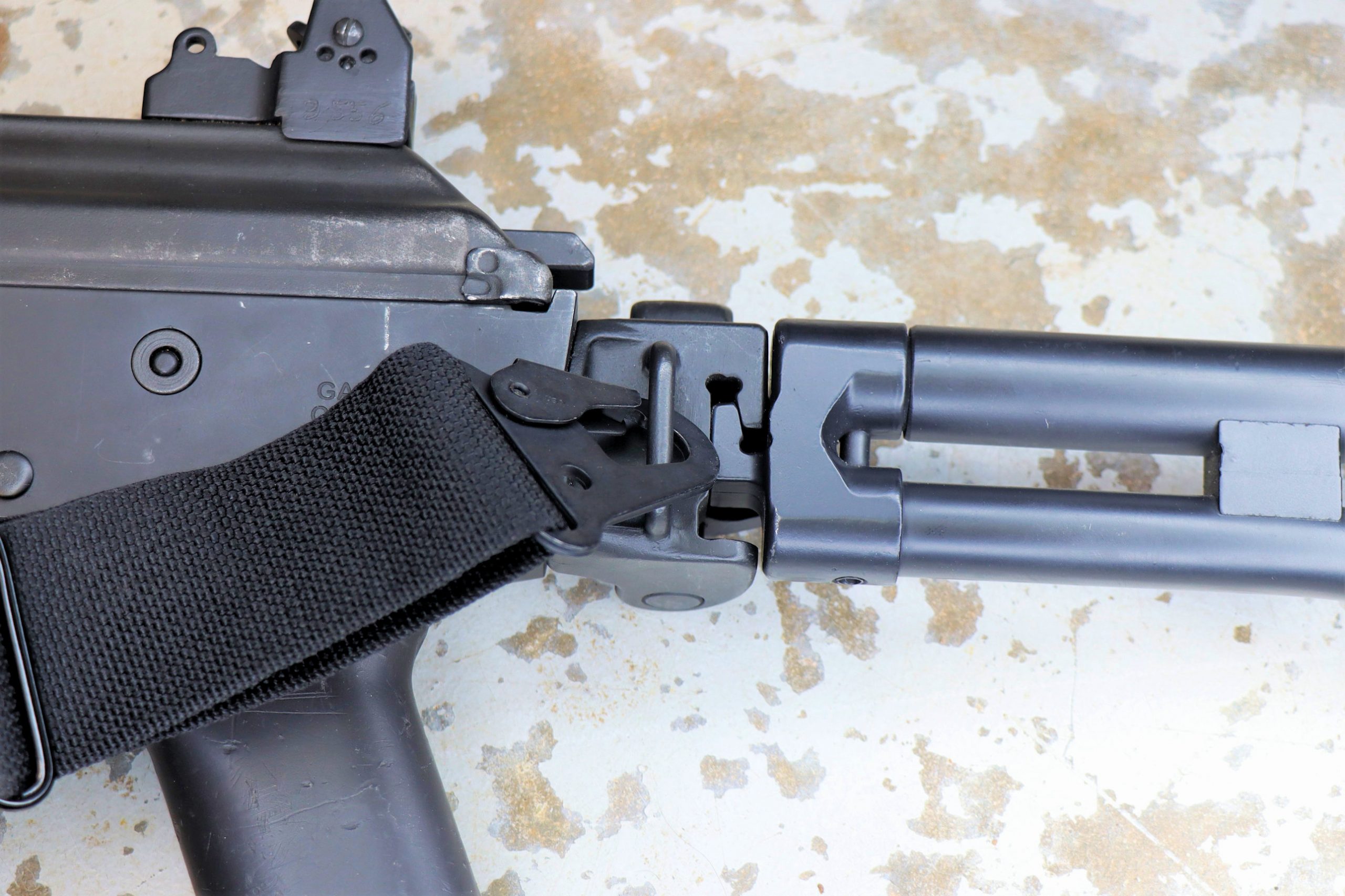 When I need to put the rifles into action, I have the option of switching to single-point if need be. Seeing how the Galeo is quite a long rifle (having an 18-inch barrel and 9.5-inch stock), being able to go to single-point config makes it much easier to manipulate around over a two-point sling. Using a two-point, the rifle really hangs low off the body when not shouldered, due to the long distance between the front and rear sling points (if you wrap the sling around the stock (Israeli style).
Of course, McLean Corp’s sling fixes all that. In addition to AK pattern rifles, I think this sling would also be a good option for other more modern rifles that have side-folding stocks and multiple sling attachment points, rifles like the FNH SCARs, Beretta’s ARX 100, and the CZ Bren 805 / 2M, to name a few. Utilizing McLean Corp’s Dynamic Retention Sling offers excellent flexibility and options for these types of rifles.

The Wrap Up
To be honest, for ARs, I’m not too excited about the DRS. I prefer a simpler two-point for them. But change the rifle to something other than an AR (like to an AK, or other side folder), I think this sling is a great option. As I mentioned in my sling article from 2011, single point slings are the most maneuverable, especially in CQB. Their downside is they’re horrible if you need to secure the rifle to your body. McLean Corp’s Dynamic Retention Sling fixes that.
Being able to go from a multi-point to a single-point sling on the fly is a great capability, offering both security and maneuverability, all in one sling. So, for those struggling to find the perfect sling for their AK, SCAR or my favorite, a Galil, I think you should give McLean Corp’s DRS sling a serious look. And, for those who are now considered ‘old school’ with their single-point mounts on their AR, you also now have a viable option, one that offers more security over a single-point with the ability to always convert it to one when the situation calls for it.

© Copyright 2021 DefenseReview.com (DR) and Jeff Gurwitch. All rights reserved. This material may not be published, broadcast, rewritten or redistributed without receiving permission and providing proper credit and appropriate links.

David Crane started publishing online in 2001. Since that time, governments, military organizations, Special Operators (i.e. professional trigger pullers), agencies, and civilian tactical shooters the world over have come to depend on Defense Review as the authoritative source of news and information on "the latest and greatest" in the field of military defense and tactical technology and hardware, including tactical firearms, ammunition, equipment, gear, and training.
Previous CZ Group (CZG ) to Acquire Colt Holding Company LLC for $220M (Million) Plus Shares: Oh, Boy
Next Walther PDP (Performance-Duty Pistol) and PDP Compact 4″ 9mm Combat/Tactical Pistols: Modular, Versatile and Optics-Ready!