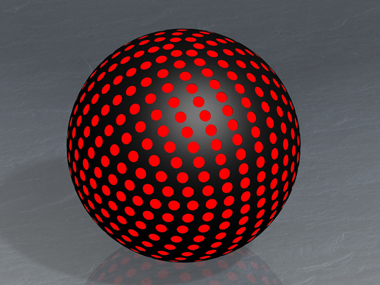 The SDS 3D spherical passive infrared (IR) sensor array is currently being developed to detect and track thermal/IR heat signatures primarily in the 3-5 and 8-12-um thermal imaging bands and can sample at 10-1000 kilohertz (kHz). While the current SDS 3D prototype system is an 8-12-um band system for detecting and tracking human and vehicle IR targets, the company is performing 3-5-um band analysis for detecting missiles, RPGs, high-speed vehicles, and ballistic arms fire.

Lucid Dimensions is billing SDS 3D as “the ideal sensor system for Infrared Search and Track (IRST)”, since it’s high-speed/low-bandwidth, gives you an angle to target (giving you azimuth and elevation to each target), can see multiple targets simultaneously, and can automatically slew-to-cue a camera, weapon system, countermeasure system, laser rangefinder, etc. “SDS can simultaneously track multiple targets in any spatial orientation” (company quote), and once it detects a target, it can quickly point anything that needs to be pointed at that target. 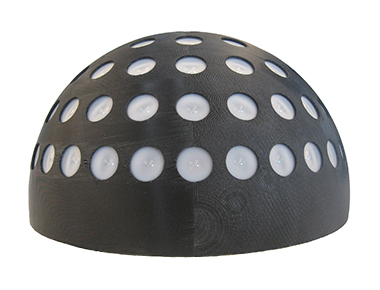 A Spherical Detection Systems 3D prototype can currently detect incoming targets out to 300 meters, but the goal is ultra-long-range passive infrared detection out to distances of 1,000-10,000 kilometers (km). DefenseReview first became aware of the SDS 3D tech when Lucid Dimensions’ co-founder and CEO Adam Calihman sent us an email about it last year (August 19, 2008). In that message, Mr. Calihman mentioned SDS 3D’s potential for high-speed gunshot/sniper detection applications. “By utilizing single pixel thermal detectors evenly distributed about a spherical surface we have found a powerful and highly accurate solution for high-speed detection with low data bandwidth, low power requirements, full situational awareness, and muzzle flash/blast detection at up to 2 kilometers [2km] range is expected in the near term as we optimize the system,” Calihman says. The 2km-range capability “has been proven feasible” by recent field testing, according to Calihman.

Theoretically, SDS 3D should be applicable to everything from infantry warfare to air combat (both air-to-air and air-to-ground) to perhaps even space warfare, provided it works as advertised. A soldier-mounted SDS system could theoretically be helmet-mounted or shoulder mounted, as both are semi-spherical surfaces. A vehicle-mounted system is a no-brainer, as it would be applied the same way current anti-sniper gunshot detection systems are applied. If SDS 3D were applied to fighter aircraft, the idea would be sensor fusion of SDS and AESA (Active Electronically Scanned Array) radar, which would provide redundant and augmented detection and tracking of high-speed incoming air-to-air missile threats and aircraft in air-to-air combat environments and ground-to-air missile and AAA (Anti-Aircraft Artillary) threats and ground vehicles in air-to-ground combat environments.

DefenseReview plans to augment this story with some Lucid Dimensions documents, so stay tuned for updates.

David Crane started publishing online in 2001. Since that time, governments, military organizations, Special Operators (i.e. professional trigger pullers), agencies, and civilian tactical shooters the world over have come to depend on Defense Review as the authoritative source of news and information on "the latest and greatest" in the field of military defense and tactical technology and hardware, including tactical firearms, ammunition, equipment, gear, and training.
Previous Artis Iron Curtain Active Protection System (APS): Shoot-Down Ballistic Reactive Ground Vehicle Defense System
Next “Brotherhood of Warriors” Takes You Inside the Secret World and Missions of Israeli Military (IDF) Special Operations Unit Duvdevan