Researchers from Sony and the Max Planck Institute (Max Planck Institut für informatik) have developed a Flexible Organic Light Emitting Diode (FOLED) display screen technology a.k.a. Flexible OLED display screen that may represent the most significant step yet toward commercially-available flexible, bendable and portable display screen technology in the 21st century, and they’ve published a paper on it in the New Journal of Physics titled Annihilation assisted upconversion: all-organic, flexible and transparent multicolour display."

According to a ScienceDaily article titled Flexi Display Technology is Now, the Sony/Planck tech is… 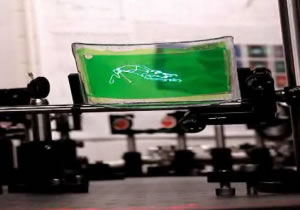 based on red or IR-A light upconversion (UC), and the organic molecules inside these flexible organic emissive UC displays "emit non-coherent light in 4 (all directions) to produce an image." The result is a flexible/foldable organic light-emitting display that’s bendable, durable and portable, with no resolution or size limitations. "To the best of our knowledge we demonstrate for the first time a versatile color all-organic and transparent UC-display. The reported displays are also flexible and have excellent brightness," the researchers concluded.

– All-organic transparent and flexible
– Ultra low excitation intensity (red or IR) with less than 15 mWcm-2
– Emissive display with no speckles
– Coherent or non-coherent excitation allowed
– High efficiency – at the moment ca. 6 %
– Fast response times, with ca. 1 µs up to 500 µs on request (LCDs have ms)
– Almost unlimited viewing angle, with up to the total internal reflection angle
– Tailoring of emitted colours realised even when using the same excitation source
– Multilayer Displays
– Size limited only by the size of the substrates

The Sony/Planck flexible flat panel display screen tech, if it works as well as it’s being promoted, could not only lead to lightweight, durable and flexible/foldable portable computers and media readers (newspapers, magazines, books, etc.) that you can stick in your pocket, but also wearable computers and displays that can be integrated with clothing, including military BDUs. The key, here, will be integrating iPhone-type touchscreen  technology into it.  Ideally, the keyboard should be on the touch screen itself, just like on an iPhone. This would save space and weight. FOLED display screens may just be the solution for true Predator-type (lightweight) helmet/visor-mounted (i.e. optically-mounted) and forearm-mounted display screens, the latter of which should have the aforementioned integral touchscreen.

The key in the military realm will be durability. Any FOLED display screen for military infantry and/or Special Operations Forces (SOF) applications must be adequately ruggedized. U.S. military infantry warfighters and Spec-Operators could also carry ruggedized flexable/foldable computers and/or display screens (with the actual computer element belt or back-mounted) on combat operations (combat ops), which could prove to be tremendously advantageous. FOLED displays would even make current relatively small military handheld computers brighter, sharper and easier to read.

Another potential military application of the Sony/Planck UC FOLED display screen tech are large-to-very large, durable wireless display screens and computers that can be plopped down on a table or wall-mounted inside a field command tent. These screens and computers would be wirelessly connected to the U.S. military’s network-centric warfare a.k.a. net-centric warfare computer system. If the U.S. military adopts the BattleBox ISO Container concept and containerizes U.S. military infantry forces (i.e. Army and Marines), the new FOLED tech would allow each BattleBox to incorporate a large wall-mounted computer/television (TV) display screen, which would could prove to be a real morale booster and thus happier and more efficient soldiers.

Military pilots (and aircraft) could also benefit from the Sony/Planck FOLED technology, making cockpit screens lighter and more readable, and providing pilots with a lightweight computer that’s integrated with their flight suit.

Bottom line, if the new Sony/Planck FOLED display screen technology works as advertised, it will be huge, and a potential game-changer for military communications (a.k.a. military comms), including battlefield communications, and a valuable hardware component for net-centric warfare.

DefenseReview wonders whether or not the Sony/Planck FOLED display screen tech can be integrated with E Ink Vizplex Imaging Film high-resolution active-matrix electronic paper display technology that’s currently utilized by the Sony E-Reader a.k.a. Sony Reader Digital Book.  It’s Defense Review’s understanding that E-Ink electronic paper display technology is the easiest on the eyes of any electronic display. This would make reading books and even long articles much easier on the user’s eyes than traditional active-matrix display screens.

David Crane started publishing online in 2001. Since that time, governments, military organizations, Special Operators (i.e. professional trigger pullers), agencies, and civilian tactical shooters the world over have come to depend on Defense Review as the authoritative source of news and information on "the latest and greatest" in the field of military defense and tactical technology and hardware, including tactical firearms, ammunition, equipment, gear, and training.
Previous BAE Remote Guardian System (RGS) Remotely-Operated Gun Turret
Next Numa Tactical Eyewear for Tactical Shooting Appications