This is the second installment of DefRev Quick Hits featuring the "latest and greatest" in tactical tech from SHOT Show 2007. O.k., let’s get started:

1) By now, everyone knows that the U.S. Marine Corps (USMC) recently awarded Protective Products International (PPI) with the Modular Tactical Vest (MTV) contract. Basically, the MTV was designed and developed to solve at least some of the shortcomings (a.k.a. problems or flaws) of the U.S. Army’s beloved Interceptor Body Armor–you know, the problematic and controversial infantry body armor program that U.S. Army Soldier Systems Center (Natick) / Natick Soldier Research, Development & Engineering Center and PEO Soldier (Program Executive Office Soldier) have been fighting tooth-and-nail to keep going instead of going with something truly superior (and revolutionary a.k.a. "next step") like Pinnacle Armor Dragon Skin SOV body armor. U.S. Army Natick and PEO Soldier have been like a (really stubborn) dog with a bone they just don’t want to let go of, over there (with regard to the Interceptor program). They just don’t want to give up and admit defeat.

Anyway, DefenseReview got to view and fondle the MTV at PPI’s booth, and we must say that… 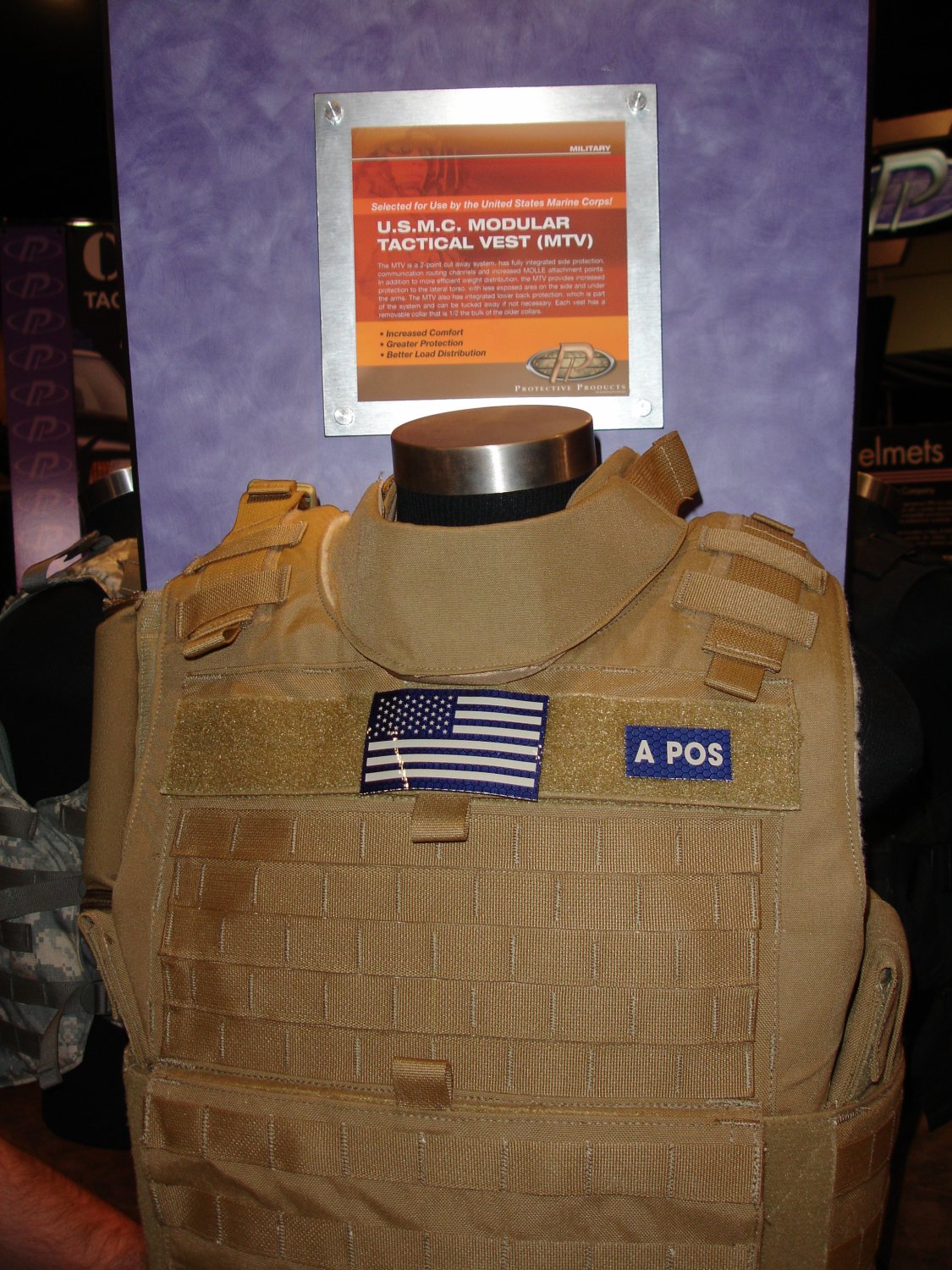 the PPI / USMC Modular Tactical Vest (MTV) looked pretty solid, despite the fact that it will most likely utilize the same conventional (and fragile) mil-spec SAPI and ESAPI ballistic armor plate tech (a.k.a. ceramic hard armor plate tech) as Interceptor (unconfirmed/unverified), which the warfighter must handle with care (and not drop or treat too roughly). That said, everything on the MTV looked to be pretty well conceived and executed, including the way it’s configured, the way it goes on and off, the quick-release mechanism, increased side protection, etc.

The MTV is a two-point cut-away system. It features routing channels for two-way comms (two-way communication wiring/gear), enhanced side protection (that’s fully integrated), and increased MOLLE atachment points. It’s claimed that the MTV’s weight is distributed more evenly/uniformly than the Interceptor Body Armor System. Lower back protection is also integrated into the system, and can be tucked away when not required. The MTV comes with a removable ballistic collar (soft armor) that’s 50% smaller than the older collars.

Anyway, just from what we’ve seen so far, it’s gotta’ be better than Interceptor. Hopefully, the Interceptor program won’t survive too much longer.

Defense Review took numerous photos of both the MTV and Operator ballistic vests, and we’ll be publishing a number of them in a follow-up piece very soon. 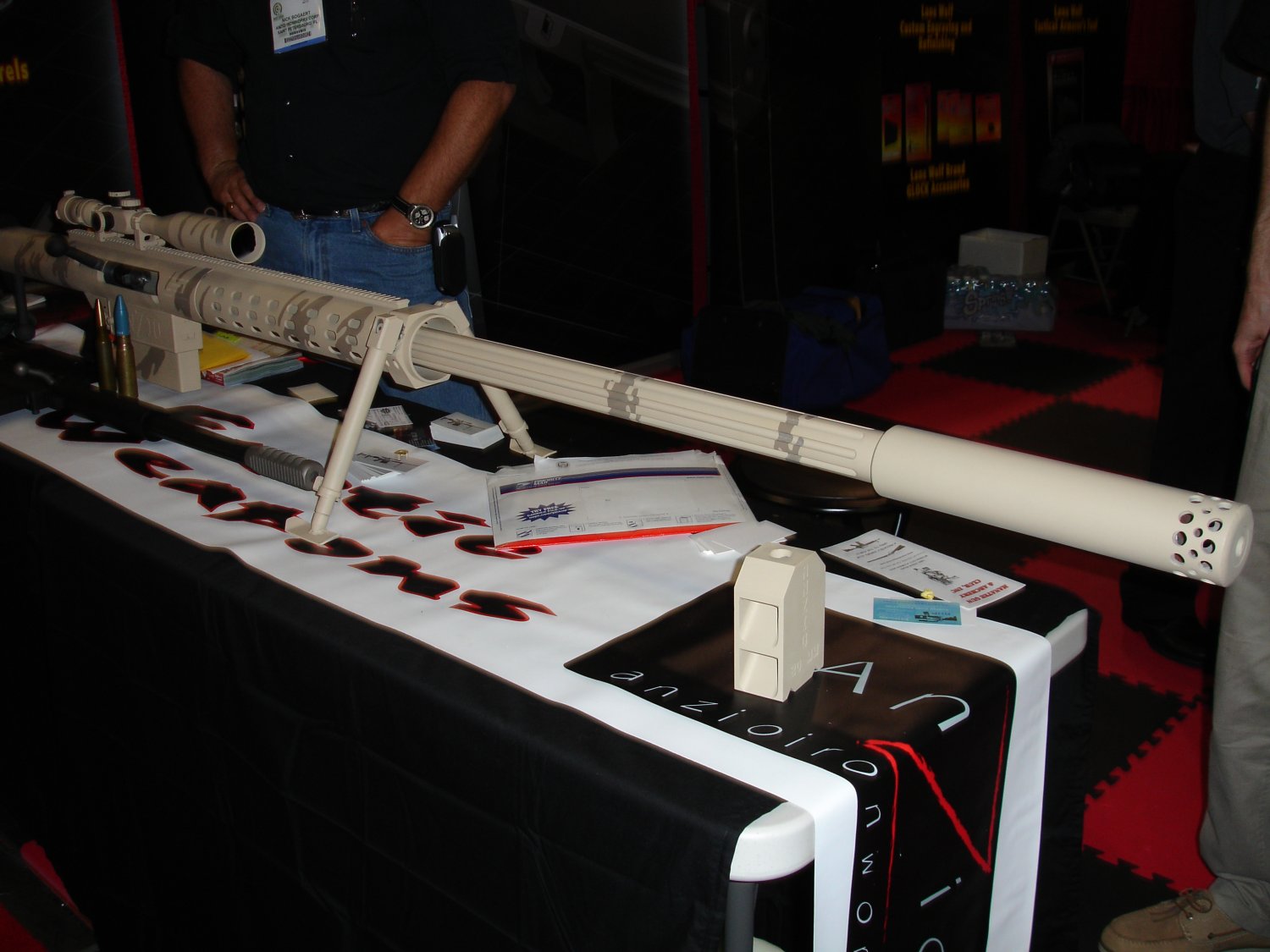 2) Anzio Ironworks had a really cool mag-fed 20mm anti-materiel/sniper rifle at their booth that was really a sight to see. I mean, this gun looked SERIOUS. It’s called the 20mm Take-Down Rifle, and it fires 20mm Vulcan cannon rounds. That’s right. Oh, yeah. Brings a smile to your face, doesn’t it? It certainly did to mine.

Defense Review took a bunch of photos of the 20mm Take-Down Rifle at SHOT Show 2007, but you really have to see it in person to appreciate it. We didn’t get to fire the weapon. We’re going to try to learn all we can about this weapon in the coming weeks.

Now, the idea of firing 20mm cannon rounds from a bolt-action rifle platform seems like a good one, assuming the felt-recoil isn’t punishing. If the gun is has a smooth action, is reliable and durable, is combat-accurate, and the recoil is indeed manageable by the shooter, Anzio’s got something really special on their hands, and the weapon deserves a serious look by USSOCOM (a.k.a. SOCOM). I would imagine that the U.S. military Special Operations community could put this weapon to good use in the Sandbox to neutralize enemy vehicles and insurgents. Defense Review has seen what a .50 BMG anti-materiel rifle can do to individual enemy combatants/insurgents. Needless to say, it’s one shot per customer, irrespective of where you hit them. We can only imagine what a 20mm would do. Locating all of the bad guy’s parts after impact would most likely take on scavenger-hunt-like proportions. Basically, with the Anzio Ironworks 20mm, U.S. operators would be able to vaporize hostiles.

Assuming it’s adequately accurate, the Anzio Ironworks 20mm Take-Down Rifle (anti-materiel rifle) may even have a place in the countersniper role. We’ll see. 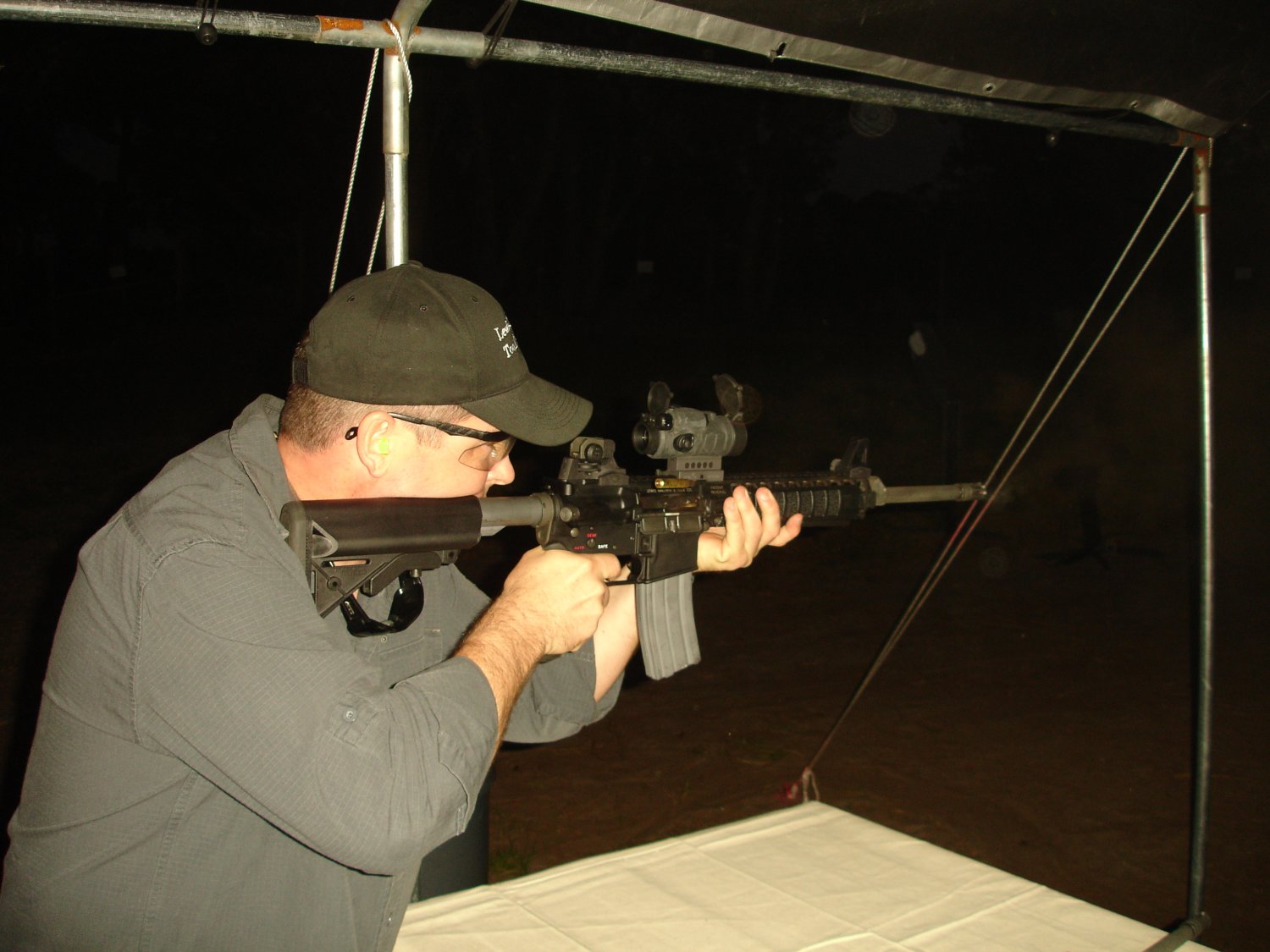 3) DefenseReview got to fire a Lewis Machine & Tool (LMT) gas-piston/op-rod-driven MRP (Monolithic Rail Platform) tactical carbine (AR-15/M16 configuration) while we were at the Knight’s Armament Company (KAC) shoot (at their outdoor ranges behind their manufacturing facility). We did not experience any malfunctions while we were firing it, nor did we witness any malfunctions while others were doing so. Operation was pretty smooth, and recoil was about what you’d expect with a gas-piston-driven 5.56. It was a joy to shoot, actually. By the way, the beauty of the LMT gas-piston/op-rod system is that it’s drop-in/convertible. In other words, you can buy a standard direct-gas-impingement LMT MRP and the gas-piston/op-rod system components, and you’ve essentially got two rifles in one, the best of both worlds, so to speak. Pretty neat system.

Unfortunately, the Lewis Machine & Tool (LMT) gas-piston/op-rod system is still under development, so you’ll have to wait a little while. If I remember correctly, we’re looking at sometime between April and June 2007 (unconfirmed/unverified), but don’t hold me to that. At the moment, I’m not even sure that LMT will even release it. I’ll have to call and check.

Note: The individual pictured firing the LMT MRP gas-piston/op-rod AR-15/M16-config carbine (above right) is not a member of the DefenseReview staff. 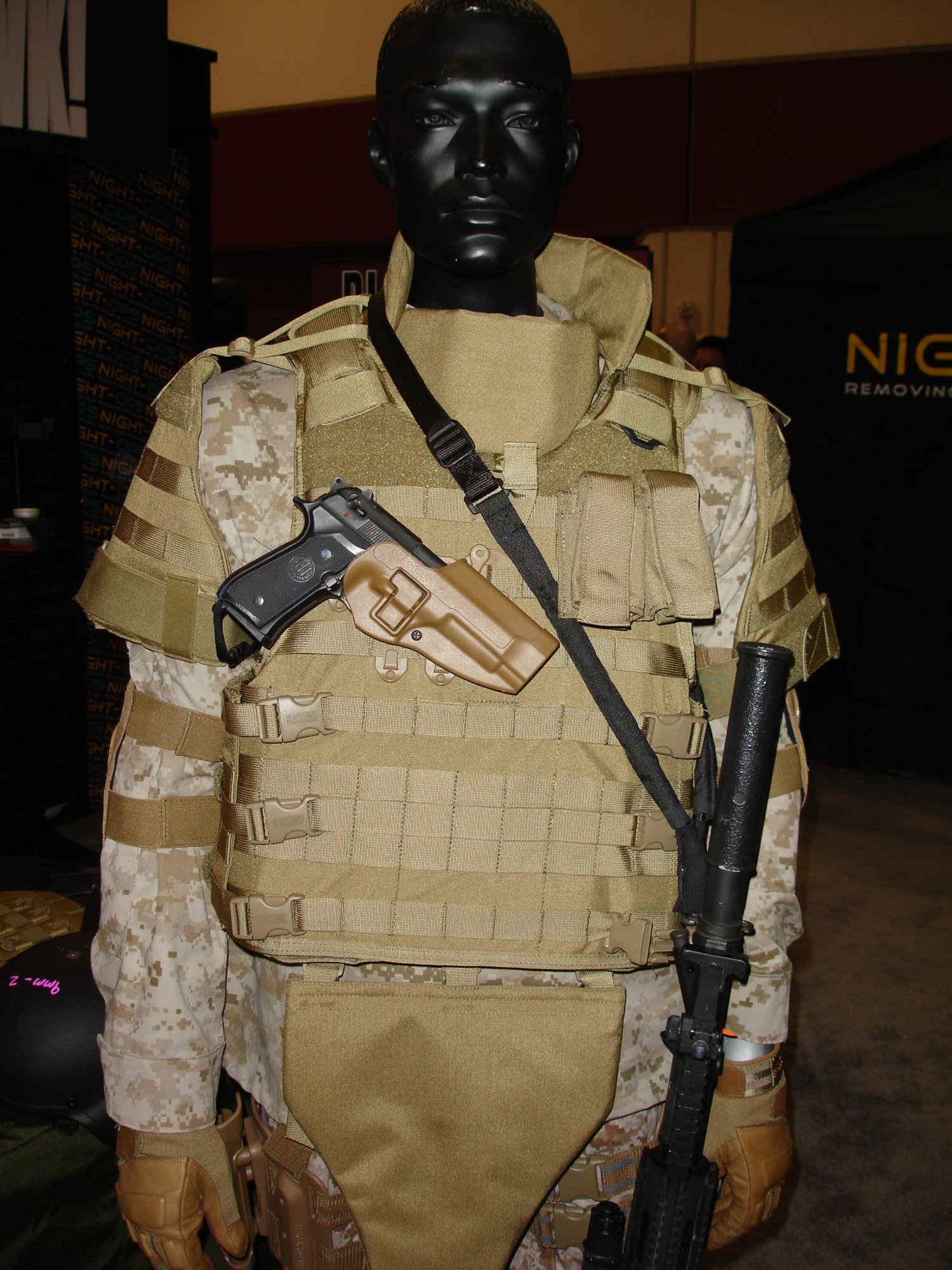 Anyway, Matt Willette, Special Operations Business Development Manager at Blackhawk! Products Group (BPG), did an excellent job of demonstrating the various attibutes of the system (he clearly knew the system backwards and forwards), including it’s emergency-quick-release a.k.a. "cutaway" mechanism, which looks very well designed. In fact, the entire S.T.R.I.K.E. tactical body armor system appears to be very well thought-out and executed. It’s a pretty slick system. By the way, Blackhawk has a video in DVD format on the S.T.R.I.K.E. Cutaway Tactical Armor Vest – OTV/IBAS that demonstrates it’s various features, including the cutaway/quick-release system.

Notice the the chest-mounted Blackhawk CQC Carbon Fiber SERPA Holster on the Blackhawk STRIKE Vest in the photo at left.

It should perhaps be noted that Mr. Willette attended the same Advanced Israeli Anti-Terrorist SWAT School that I attended (and subsequently wrote about) in December 2005. I mentioned this course again in a subsequent article about the IMS Security, Inc. promotional video, which includes video footage of a bus takedown (rapid-action tubular assault). Anyway, Mr. Willette did very well in the course, which is not surprising. Mr. Willette’s background is in (U.S.) military Special Operations and law enforcement SWAT operations. In other words, he definitely has the requisite skillset to do exactly what he’s now doing for Blackhawk. Frankly, Blackhawk’s lucky to have him, and it speaks well of them that they do.

Author’s Note: The IMS Security Advanced Israeli Anti-Terrorism SWAT School was only open to military personnel, LE SWAT operators, and federal agents. I was the only civilian allowed to participate in the course.

Defense Review also spoke briefly with Phil Aufiero, Blackhawk’s other Special Operations Business Development Manager, about the STRIKE vest. While we didn’t get to speak with him at length, he also seemed very knowledgeable about the product. DefRev looks forward to interviewing both Mr. Willette and Mr. Aufiero about the Blackhawk S.T.R.I.K.E. tactical vest (a.k.a. tactical ballistic vest a.k.a. tactical body armor) in the not-too-distant future.

5) And, while we’re on the subject of Blackhawk Products Group (BPG) a.k.a. Blackhawk Industries, we should also mention the new Night-Ops Xiphos NT LED Pistol Light (single cell), which is still under development, yet still very cool. The "NT" stands for "Next Technology". DefenseReview got a chance to play around with a beta-test version of it at the Blackhawk! / Night-Ops booth, and they were nice enough to send us home with a sample unit for T&E. Again, Xiphos NT LED Tactical Pistol Light is still under development (i.e. in beta testing), and it will be further developed (and thus undergo modifications) before going into production.

That said, DefenseReview can already tell that this is going to be a hot product.

More "Quick Hits" on tactical technology from the show are on the way, so stay tuned.

David Crane started publishing online in 2001. Since that time, governments, military organizations, Special Operators (i.e. professional trigger pullers), agencies, and civilian tactical shooters the world over have come to depend on Defense Review as the authoritative source of news and information on "the latest and greatest" in the field of military defense and tactical technology and hardware, including tactical firearms, ammunition, equipment, gear, and training.
Previous SHOT Show 2007: DefRev Quick Hits 1
Next KRISS Super V XSMG System .45 ACP Submachine Gun: Photos of Latest Prototypes