Anyway, as it happens Defense Review recently got to view and handle the… 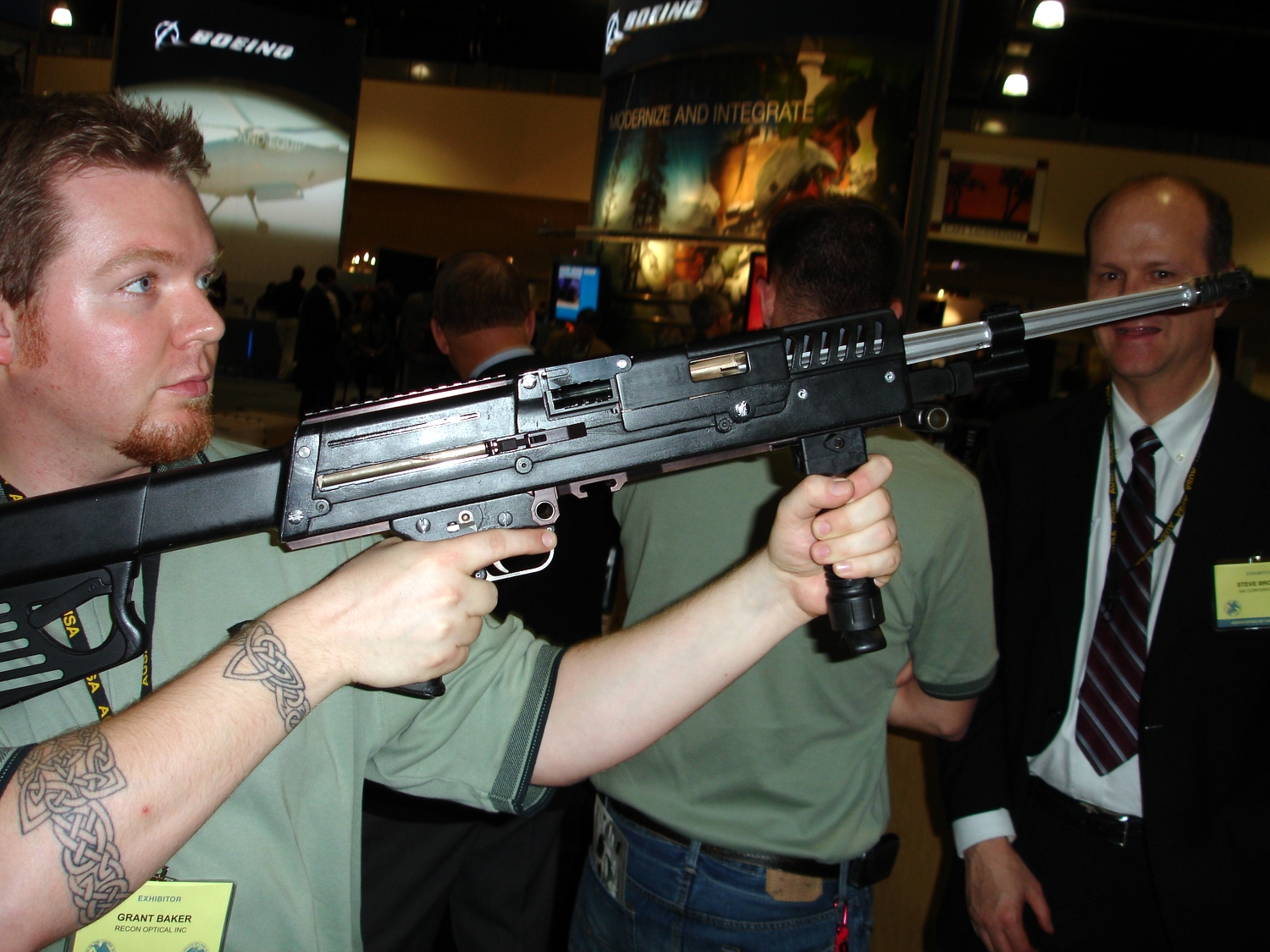 AAI LSAT LMG/SAW (Light Machine Guns/Squad Automatic Weapon) developmental prototype weapon at AUSA Winter Symposium and Exhibition 2007 in Ft. Lauderdale, FL. One thing that impressed us immediately was the weapon’s empty weight (dry weight) of approx. 9.2 lbs. The version we handled was the version designed around AAI’s plastic cased telescoped ammunition (a.k.a. plastic CT ammunition). The cartridge caliber is 5.56mm NATO/.223 Rem. It was communicated to DefenseReview both on the phone and at the show that the cased-telescoped ammo version LSAT is the version that AAI is currently focusing on, since plastic CT ammo is the lower-risk option, compared to caseless telescoped ammunition (CL ammunition). Anyway, the weapon felt pretty good and light in our hands. So ergonomics seemed pretty good. However, we didn’t get to fire it. Regarding test firing, we were told that the weapon has, so far, only been fired 20 rounds at a time using 20-round belt sections.

Note: in the photos contained in this article, notice the Grip Pod System (G.P.S.) vertical foregrip. We’re not sure whether the model pictured is the GPS01 G.P.S. (7075-T6 Aluminum) or GPS02 G.P.S. (Polymer). The Grip Pod System (a.k.a. GripPod System) is manufactured by, appropriately enough, Grip Pod Systems (G.P.S.). 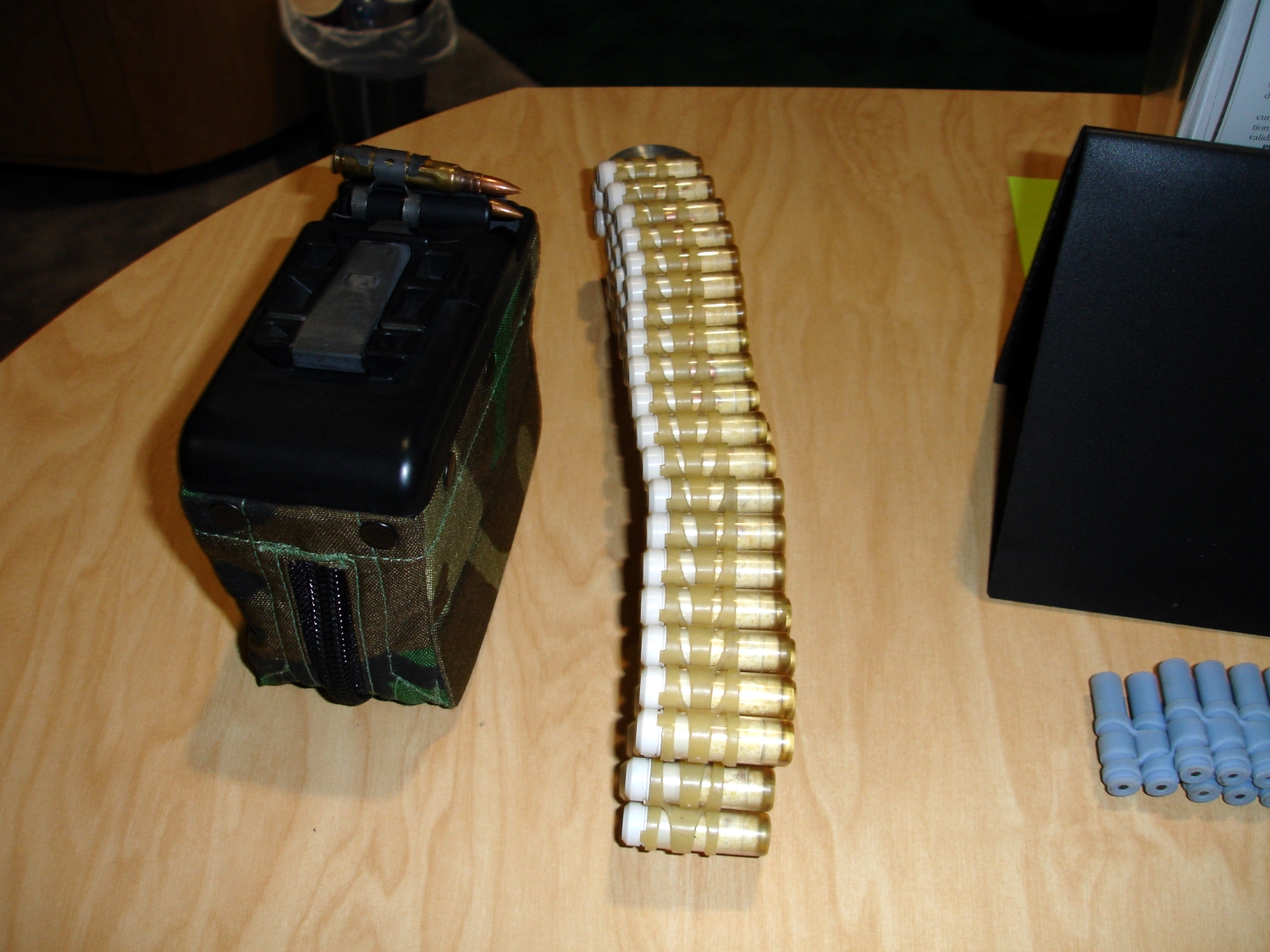 The reason AAI is starting with plastic cased-telescoped ammo is that caseless ammo is a higher-risk proposition involving greater technical and physical challenges than cased telescoped ammo. One of the primary challenges with caseless telescoped ammo (CL ammo) is how to continuously and consistently seal the chamber as the weapon is fired (i.e. provide for a repeatable seal), especially on full-auto under high round count. According to legendary infantry small arms designer (a.k.a. firearms designer a.k.a. gun designer) Jim Sullivan (L. James Sullvian), CEO of small arms development firm Arm West, LLC, "if you can’t seal that breach, you’ve gotta’ go back to a muzzle-loading single shot. You have to seal the breach, and you’ve gotta’ seal it with every shot. And, you can’t have something that wears out. So, you’ve gotta’ replace the seal with every shot." With cased ammo, the case itself acts as the renewable chamber-sealing device a.k.a. "replaceable seal" [replaceable breach seal], as Sullivan calls it, and a brass case seams to work the best at this. "Cartridge brass is unique stuff", Sullivan says. With caseless ammo (caseless telescoped ammo), you lose this replaceable seal. 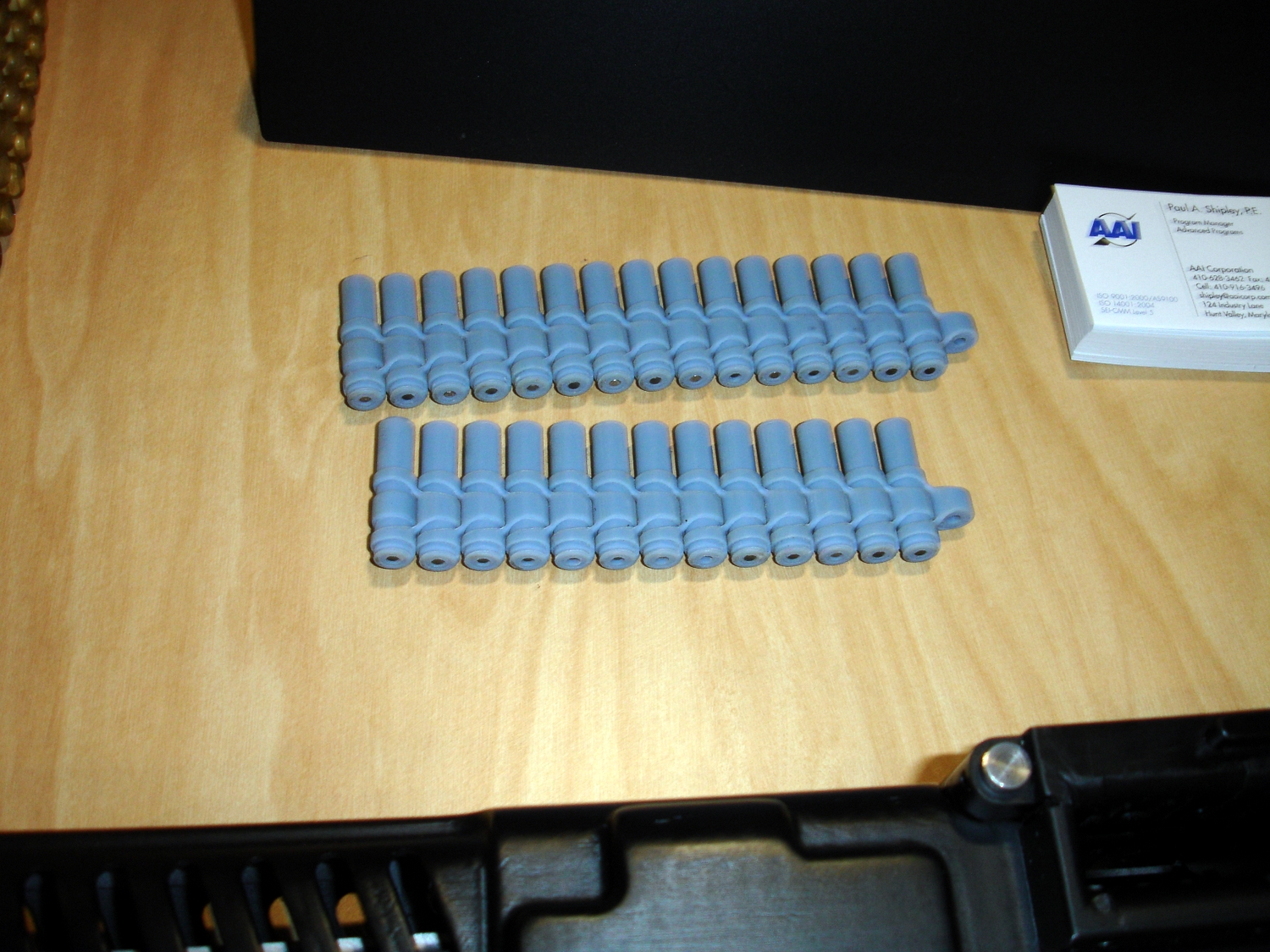 Now, a plastic case is better than no case (with regard to providing a fresh breach seal for each shot), of course, but it ain’t brass, either. For one thing, plastic, historically, has tended to melt/burn at the high temperatures generated by full-auto weapons (small arms). It’s possible that AAI has solved this problem by utilizing some kind of high-tech heat-resistant plastic that can handle these temperatures, but that remains to be seen. Assuming the plastic they’re using can handle the high temperatures of full-auto fire at high round count (or even low round count), the plasic case should assist in insulating the chamber so it doesn’t heat up to much (unconfirmed/unverified). It’s also possible that the LSAT LMG/SAW prototype’s swinging/"rotating" chamber reduces the amount of heat transfered to the chamber, and thus to each subsequent plastic case as it’s loaded in, but we haven’t been able to confirm this, either.

However, this same insulative property keeps the plastic cartridge case from performing another function of a brass cartridge case, and that’ removing (i.e. expelling) heat from the weapon upon extraction and ejection. A brass case absorbs heat upon firing the round, and that absorbed heat is immediately removed from the weapon upon extraction and ejection of the case. Plastic doesn’t offer this same heat-removal bonus.

Aside from the plastic cartridge casing, it’s DefenseReview’s understanding that cased telescoped ammo (CT ammo) itself has a few challenges to overcome. According to Sullivan, one of the primary challenges is achieving adequate and consistent projectile velocity, since the round is literally sitting inside the gun powder inside the case. This makes it very difficult to keep enough of the ignited powder (i.e. propellant gases) behind the bullet upon firing/detonation of the cartridge. In other words, you have to prevent too much of the propellant gases (from the burning powder) from escaping around the bullet as it’s propelled down the barrel after firing. 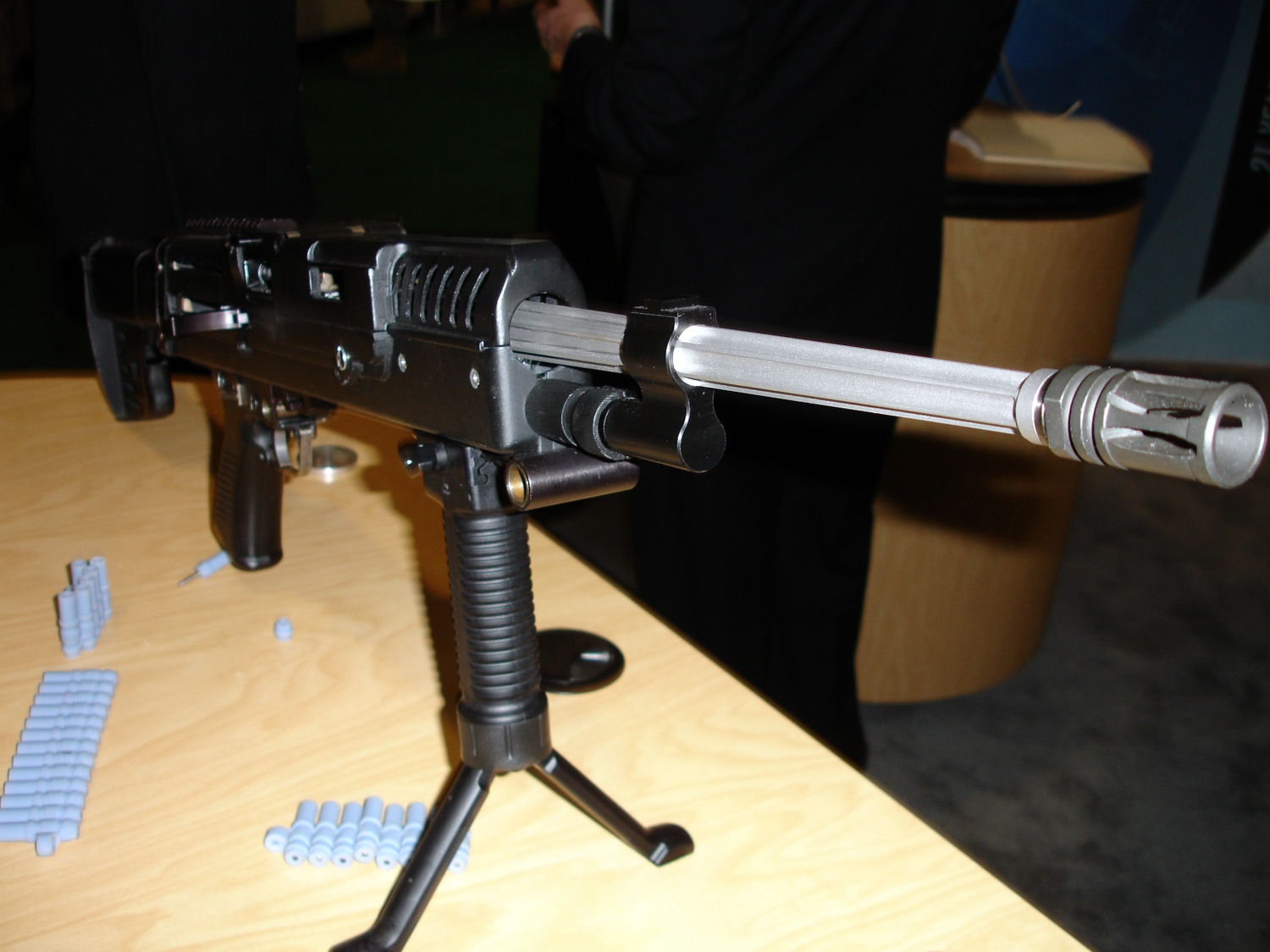 The whole reason for going to plastic cased telescoped ammo (plastic CT ammo) and caseless ammo (CL ammo) in the first place is to save weight, i.e. to lighten the infantry warfighter’s load, and to perhaps shorten the weapon’s action (bolt carrier group’s reciprocating distance, for instance) so you can speed up the full-auto-burst time. AAI claims in its LSAT fact sheet that it’s achieved an overall weapon/ammo system weight (LSAT prototype weapon plus 600 rounds) of 22.9 lbs (CT ammo system) and 19.1 lbs (CL ammo system). This constitutes a 40-50% weight reduction vs. the FN M249 SAW + 600 rounds of standard 5.56x45mm NATO ammo (38 lbs OA weight). Whether or not AAI can achieve the requisite weapon reliability, accuracy, and lethality (on full-auto at high round count under adverse conditions) required for an infantry combat weapon with plastic CT and CL ammo remains to be seen. Time will tell.

However, what if you could accomplish the specified 35% weight reduction (weapon + 600 rounds), and perhaps even more, while avoiding the incumbent technical and physical challenges of these two ammo technologies (CT and CL)? What if you could cut the weight AND retain all of the advantages of a metallic cartridge case?
This will be the subject of a subsequent DefenseReview article on the Arm West "Backbone" Weapon System a.k.a. Backbone Family of Lightweight Machine Guns (including a modular assault rifle/carbine/LMG/SAW) and ammo concepts.

Right-click on the following links, then click on “Save Target As” (Microsoft Internet Explorer) or “Save Link As” (Mozilla Firefox) to download and view the documents: 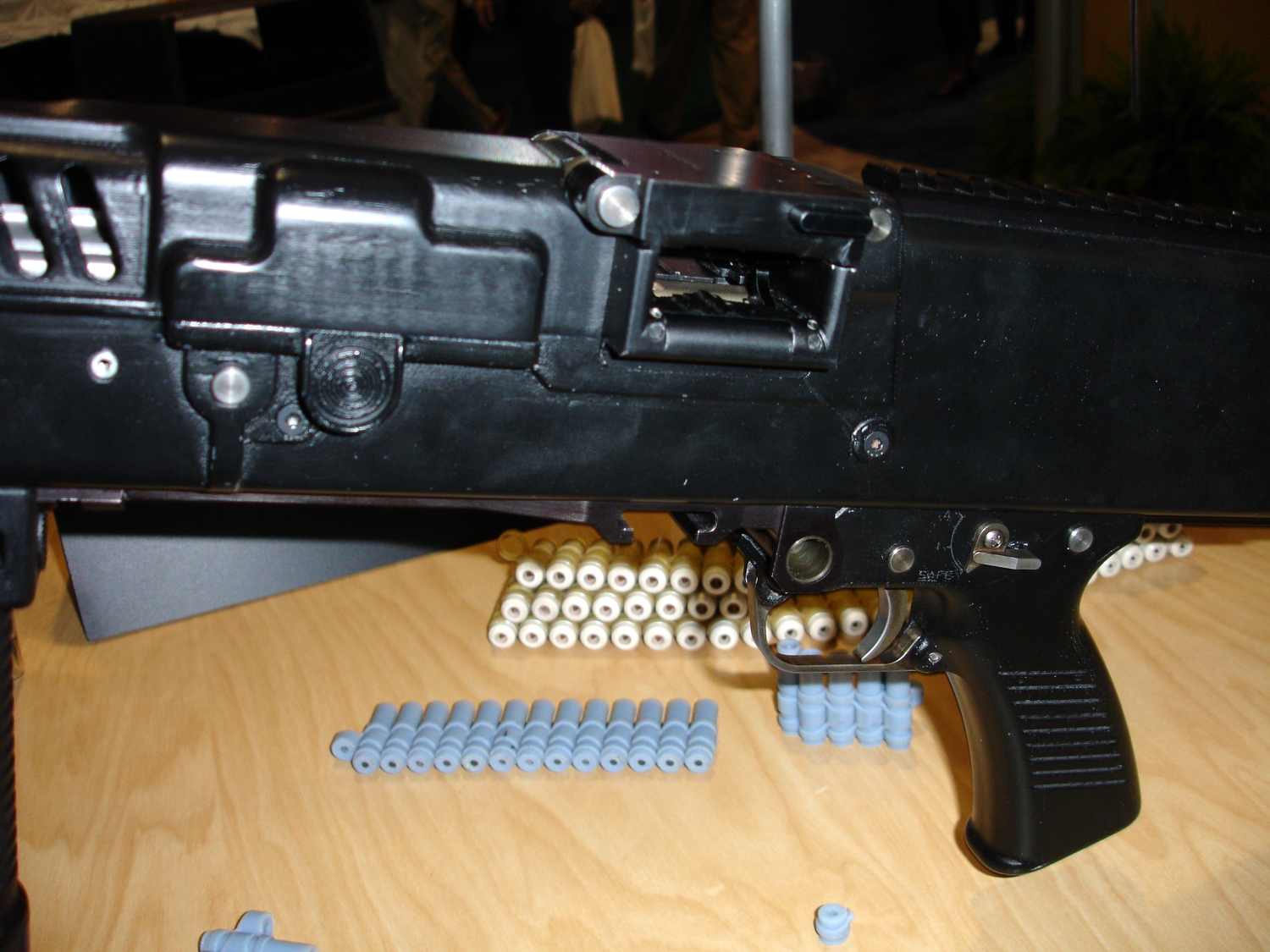 If you’d like to reach Jim Sullivan/Arm West, LLC, please contact DefenseReview.com, and we will assist you. You can contact the author, David Crane, at 305-389-1721 or via email at defrev at gmail.com. 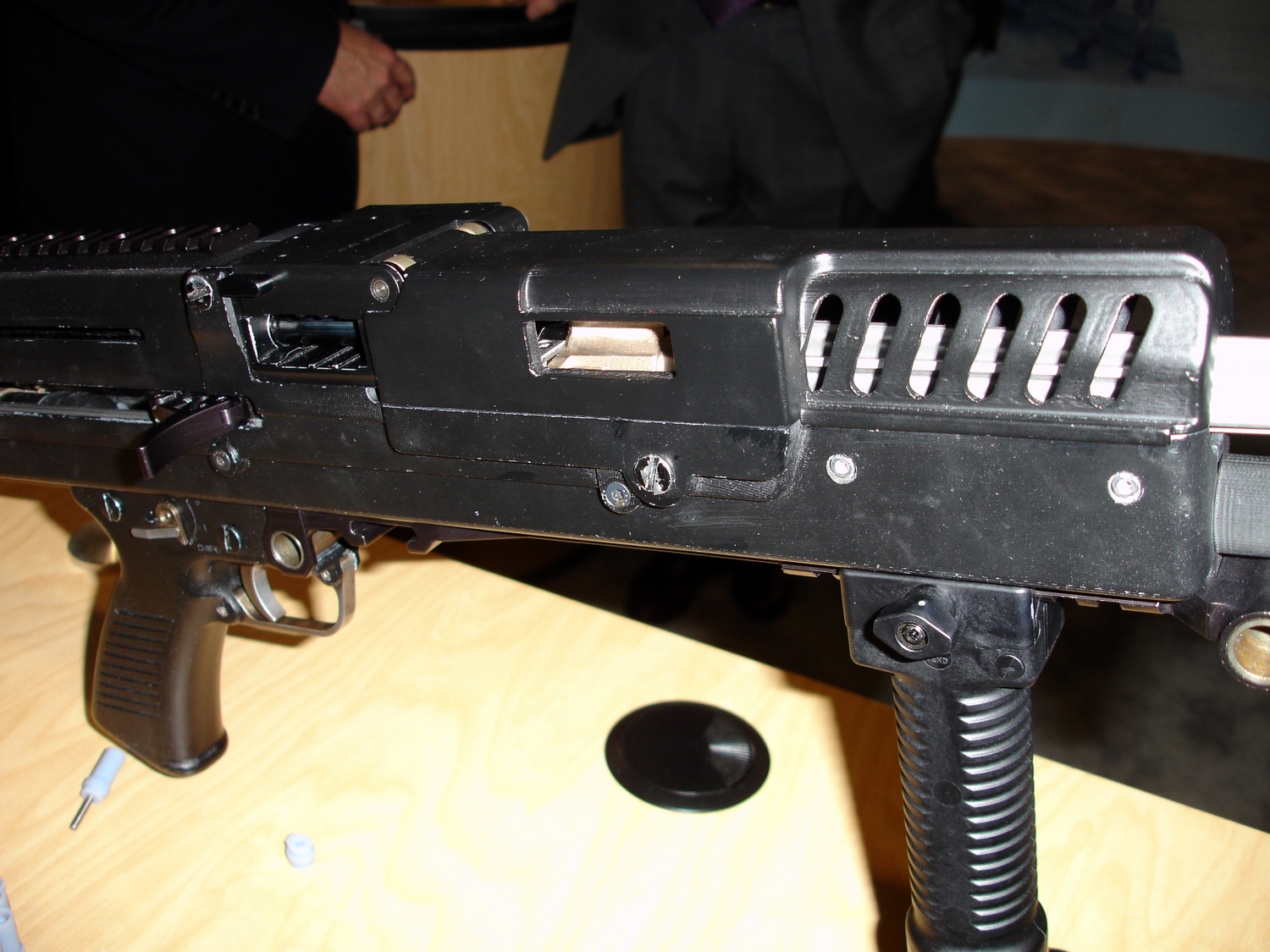 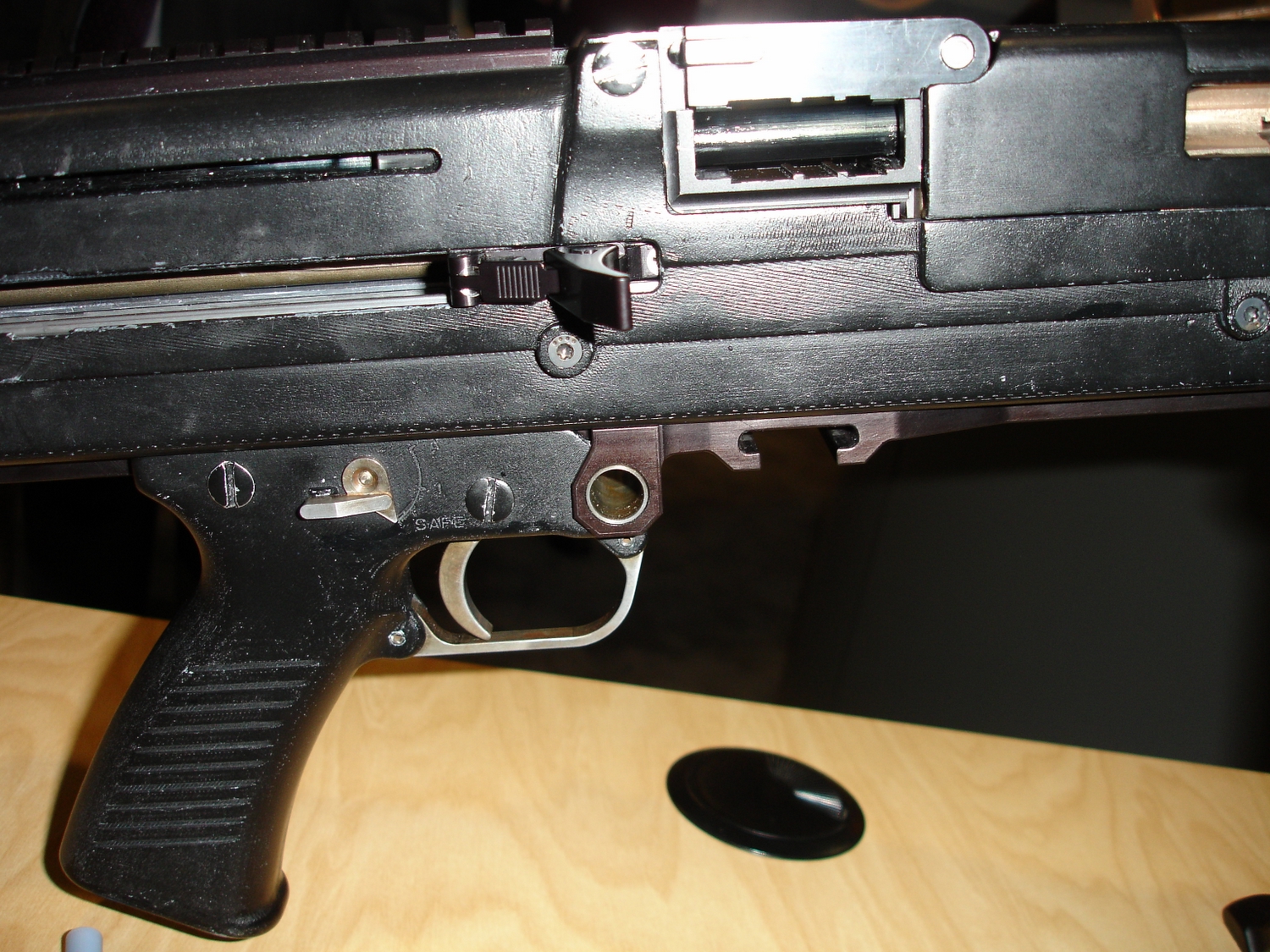 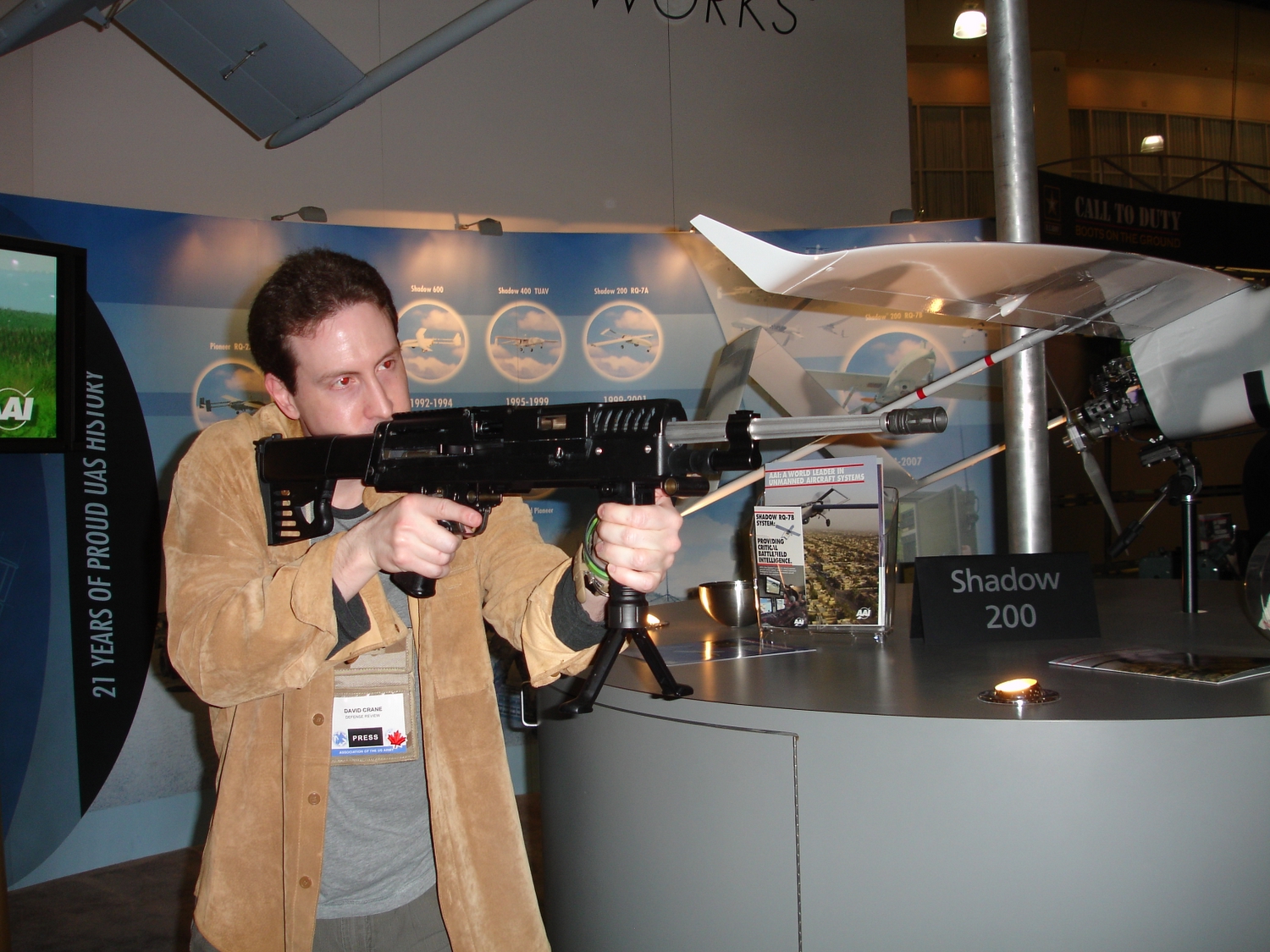 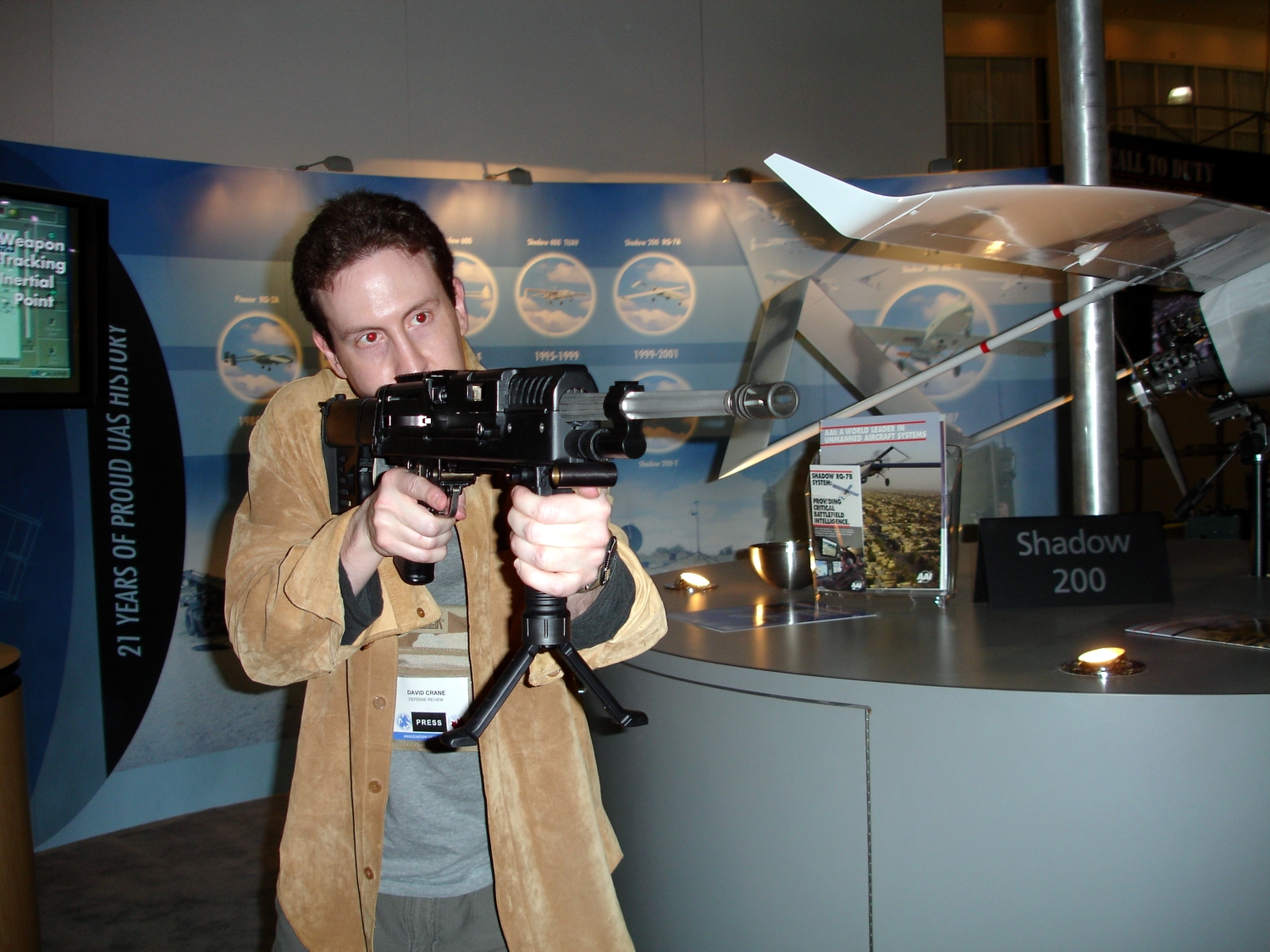 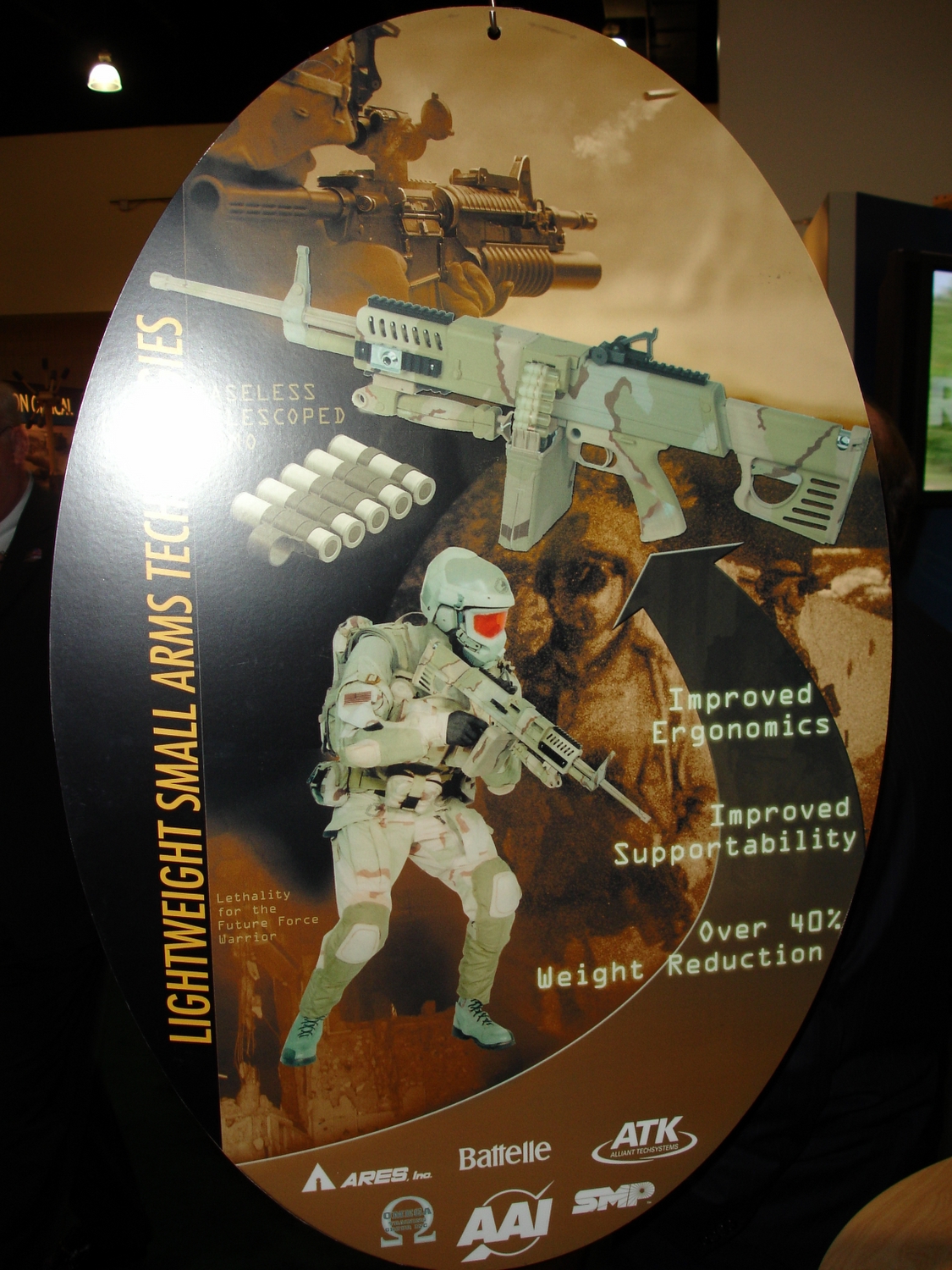 Is the U.S. Army Deliberately Endangering the Lives of Our Warfighters?

David Crane started publishing online in 2001. Since that time, governments, military organizations, Special Operators (i.e. professional trigger pullers), agencies, and civilian tactical shooters the world over have come to depend on Defense Review as the authoritative source of news and information on "the latest and greatest" in the field of military defense and tactical technology and hardware, including tactical firearms, ammunition, equipment, gear, and training.
Previous Golan Mine Resistant Ambush Protected (MRAP) Vehicle on Display at AUSA
Next Amphibious Combat Vehicles: James Bond Tech for U.S. Military Special Operations